The Voice of a River

Late summer, what trout remain hold in deeper runs and pockets of slack water where the current edge peters out. Occasionally, you can find a stray hiding behind a boulder, waiting to ambush whatever morsel happens by. The ephemerality of this river’s flow makes it hard to predict, and with each of the current’s pulses, the nature of this little trout stream changes.

Up in the headwaters, along the North Carolina/ South Carolina line, the Poinsett Reservoir is one of two lakes created to provide water for the city of Greenville and the surrounding area. It is some of the cleanest water in the country. But downstream, the landscape changes from pristine Southern Appalachian Cove forest to a deeply scarred agricultural floodplain and a moderately populated rural area. Throw in housing developments and golf courses along its banks, and the North Saluda River begins to fade into the background, mostly forgotten.

On this particular day, the water was low and clear. Clear, that was, until my feet would stir up a sand, silt, and mud slurry that would hang in the deep pools like smoke, obscuring my view of the bottom and any trout that might’ve been lying there. I spooked every fish in the river, from where I’d first stepped into the water, all the way up to the massive boulders above the bridge, and around the next bend where the golf course starts. Fly pattern makes no difference when one foregoes a stealthy approach in low water.

I needed to change my strategy, so I sat down on a flat rock in the shade to regroup and change flies. I’d worked up quite a sweat, chasing spooky trout that were in no way interested in my offerings, not to mention that I had waders on and a pile of fishing gear strapped to my back. I poured some of the cold water from the canteen into my wide-brim hat and put it back on my head to refresh my brain. I pulled on the canteen until it emptied. Then, clipped off a tired pheasant tail and tied on a tandem Gray Hackle Peacock and a bead head dropper to match.

Concentrating on tying an improved clinch knot, I caught a glimpse of movement across the river, which turned out to be a small otter in the mud holding a lifeless rainbow trout in its jaws. I guess he beat me to it, even though in this heat, the fish was probably damn near dead when he caught it. The otter shot up into a hole under the bank to eat and watch me try to catch one of my own. After a number of casts and a tangle or two, a tiny trout grabbed my Gray Hackle, but it came off the hook when I snatched it out of the water, sending the bead head into an overhanging branch, wrapping itself around in a nightmarish tangle of knots that forced me to cut the line and re-tie.

Giving up on that hole, I went upstream toward the golf course. The concrete bridge for the cart path is usually the haunt of some pretty good fish in warmer weather. The large shelf of rock that runs under the bridge is now covered with a couple of feet of sand, probably washed from a nearby sand trap in a recent flash flood. All under the bridge in the water is a multitude of white, perfectly round golf balls. Had I thought to bring a bucket, I would’ve gathered a bumper crop of the little orbs, and perhaps dumped them in a pile in the middle of the cart path. On the riverbank where the golf course begins, there is a sign that warns: 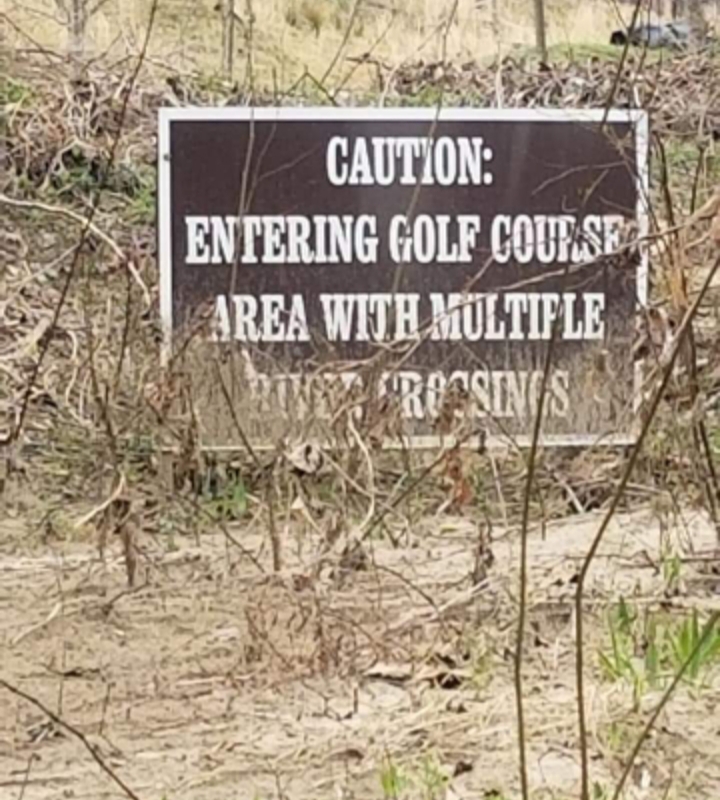 This is no doubt an attempt to deter any angler that would be inclined to chase trout through the heart of the club’s well-manicured course, fouling the scenery or disturbing the players with the prospect of getting whacked with a stray golf ball in the process. With the number of balls littering the banks and river bottom, I’d say the probability of that is rather high. Perhaps I should’ve worn a batting helmet and a chest protector.

I saw a shadow move into a deep pocket below where I stood, just out of the shade of the bridge. It was a trout, inching its way along the sandy bottom, among the golf balls, trying to find a place to hang on in the current. The trout swam along the rock crevice at my feet. It would hold there for a moment, then get washed back, losing yardage each time, having to fight its way back upstream.

The little rainbow trout paid me no mind, focused instead on moving against the current, toward the source. Feeling sorry for the fish, I looked for a place nearby where the struggle would be lessened. Right or wrong, I took the net from my belt and scooped the trout up for relocation.

Though the trout was visibly exhausted and weak in its plight upstream, it came to life with a renewed vigor in my net. The trout flopped around like I’d thrown it in a pan of hot grease. One thing I noticed, though, was that how all its color had been wrung out, leaving only a hint of the spots and a vague tinge to the scales where the rosy pink would normally be. What was left was a thin, pale trout, with its back almost the color of lead.

Just upriver about thirty yards was a deep pool of calm water, in which the trout could hide if it needed to, and where it could rest up for the remainder of its journey. I released the trout and watched it swim into the shadows.

I worked my way on up around the next bend, pushing through low-hanging branches. When I emerged from the tangle on the other side, I was spotted by a group of lady golfers who were gathered around a sand trap. I could hear their faint gasps and see their startled reflexes. Had these women had purses, they would’ve clutched them. I threw my hand up apologetically, and the ladies went back to their game, glancing nonchalantly over their shoulders or giving me the side-eye the entire time. The golfers hurried along to their next hole, and I did the same. Mine was a large brush pile with a deep run hugging the back side.

I cast a Red Hackle Gray wet fly with a matching bead head dropper into the current flowing swift and deep around the edge of the brush. A long shadow emerged from the darkness and made a wild swoop at the larger fly as it swung and came up to the surface. The big trout went for the fly, biting at it a few times like a shark in the midst of a feeding frenzy. I was taken by surprise, and with a delayed reaction, I jerked the rig back, and flipped it back to the same spot. Again, the trout lunged, its dark body coming up out of the water completely, the water splashing in front of me, wetting the back of my hand. It went for the wet fly again, attacking as the fly was skimming the surface. 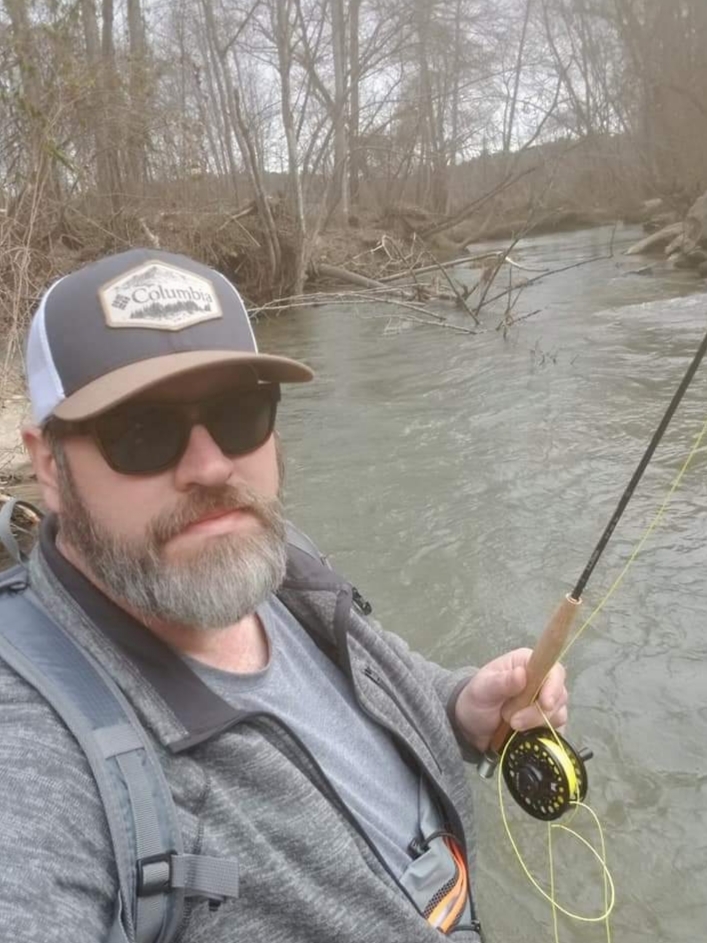 I stepped back away from the run, out of sight, and clipped my rig off and tied on a big Red Hackle Gray dry fly. I got down, putting the brush and weeds between me and the run, and made a cast across. Another cast, and the fly drifted peacefully around the bend, unharmed. On my third cast, the fly drifted down toward the shallow riffles and was tailing out when the surface exploded. I knew that it wasn’t the same fish, but when I set the hook, the smaller trout came out of the water with a violent headshake. I hoisted it over the brush pile and scooped it up in my net. Not the one I was hoping for, but it sure was a pretty brown trout. I tried to raise the other trout for a while, but the excitement provided by the hookup must’ve revealed my game.

The sun was high, and it was hot. Any trees along the stream through the golf course were planted for aesthetic reasons, not to shade the water. The ground was sodded and manicured to the stream bank, but below, where I was standing it was washed out, strewn with balls, trash, and the occasional item of lost clothing.

On my way back downstream to my car, I stopped and surveyed the leftovers from road construction several years back. Chunks of concrete slabs are part of the rock structure in the river now, remnants of the old bridge that was taken down when the state decided to raze it to create a smoother transition and to accommodate traffic from a new housing development connected to the golf course. Underneath the bridge there was evidence of the flood back in early March. Brush, tires, plastic bags, and whatever else that got caught in the torrent are now deposited high above my head in trees all along the riverbank. Kudzu is now the dominant vegetation in this stretch of river, hiding the river birch, oaks, hickories and hemlocks that once shaded the water.

I caught a glimpse of a young muskrat climbing among the weeds and fallen limbs lying in the edge of the water. It reminded me of what an old mountain fly caster had told me one time—that the secret to catching trout on a fly was to use muskrat hair. He said the hair moved so natural in the water and feels so real that a trout will hold onto it long enough for you to set the hook. His favorite Appalachian trout fly was the Thunderhead, with a muskrat body. My old friend would sometimes tell me how excellent the fishing was here, and he would lament how the river had changed, even back twenty-five years ago. “It seems like it’s been forgotten, neglected,” he would say. “This old river needs a voice, ‘cause it can’t speak for itself.”