The Rhythm of Fly Casting

The first question I ask my fly-casting students is if they have musical training. Most don’t, unfortunately. As a people, Americans are musically ignorant, about which I can do nothing.

Music training makes learning to cast a fly rod easier. After all, there’s a rhythm to the cast.

Fly casting happens in a four-four-time signature. For those who need translation, that means there are four beats to a measure. In fly casting, the backstroke happens on one. You rest on two since the line needs time to fly behind you until it’s straight. The forward stroke is on three. You rest on four since the line needs time to fly in front of you until it’s straight.

The strokes where you do not actually put the fly on the water are called false casts.

Since fly fishing requires the fly to be in or on the water as much as possible, you want your casting to be efficient, with the fewest possible false casts. In the ideal world, the cast would take two measures- one (first backcast)- two (rest)- three (first forward cast)- four- (rest)- one (second backcast)- two (rest)- three (second forward cast- let line fly), four- (let fly settle to water). Quick and efficient, with maximum time for fly to be working.

Something for everyone to consider, especially musicians, is that while in a piece of music the tempo generally stays the same throughout the piece, in fly casting the tempo changes constantly. You must feed line into the cast during the false casts. The resulting longer length of line needs more time to straighten out. The casting tempo slows to allow this to happen. 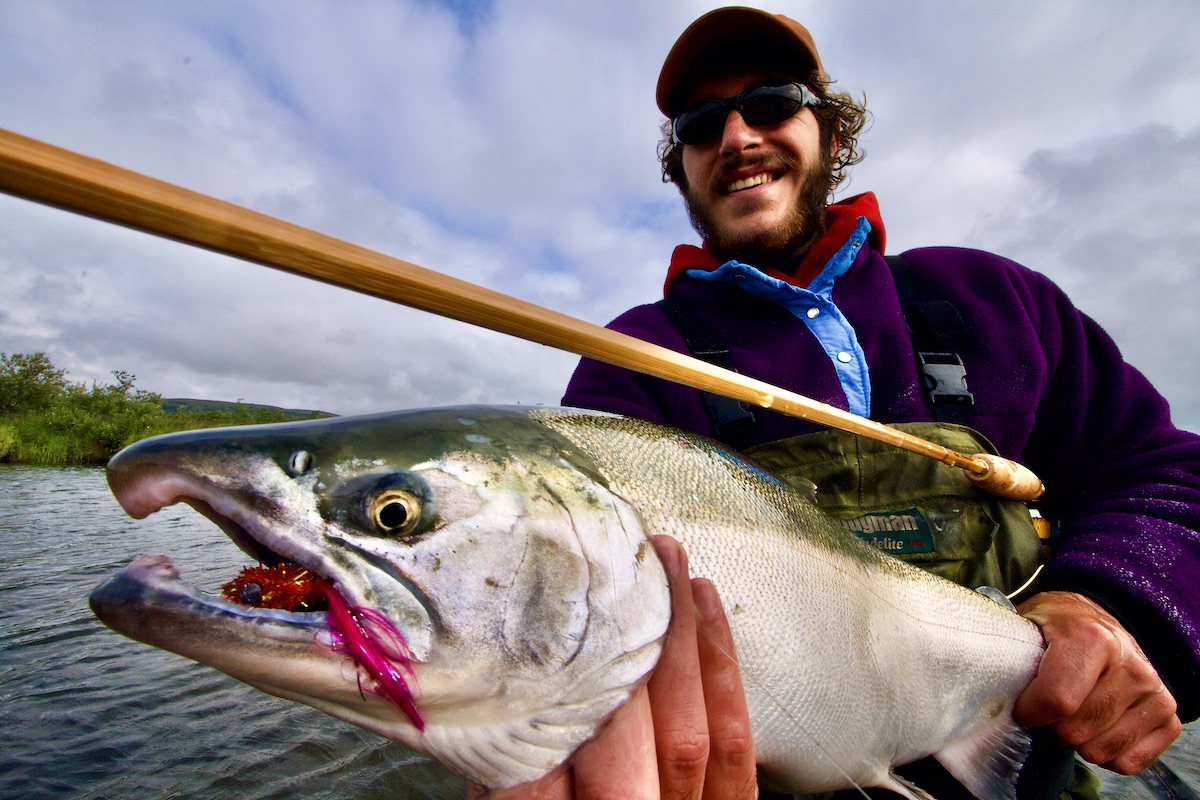 An easy way to make a visual helper for this is to put a wide, heavy permanent mark on your fly line at 30 feet. Once that mark is out of the rod tip, you know it’s time to let it go. If you put two smaller marks at 60 feet, you turn your fly line into a ruler. If you’ve never done this before, you’ll be surprised at how much it will help you during the cast.

If you got all that, good! If not, read it again. Let it bounce around in your cranium until it sinks in. Because the complicated part is coming next.

The fly rod will be in your dominant hand. We will call the non-dominant hand the off hand. While the dominant hand makes the casting strokes, the off hand handles the line. The off hand can improve the efficiency of the cast by hauling on the line during the casting stroke and recovering for the next haul during the rest. Yes, it requires some independent coordination. If you do this, a process called double hauling, your two hands are doing different but related tasks at the same time.

A haul is just a quick tug on the line. It should start with the off hand close to the dominant, or casting, hand. Especially when there’s a short length of line out, the haul is short; only a foot or so. As the tempo of the cast slows, the length of the haul may increase.

During the rest counts (two and four), the off hand recovers back to the casting hand so it’s in position for the next haul.

The off hand will be doing this- one (haul)- two (recover)- three (haul)- four (recover). Repeat as needed.

Musicians, already used to counting, don’t even have to think about the count. It just happens for them. If you’re not a musician, you’re already trying to remember proper rod position, proper arm motion, timing, and everything else that goes on during a cast. The counting will help with the timing once you learn to do it.

In his excellent instructional video, the Art of Fly Casting, Chico Fernandez says it takes four hours of instruction and 20 hours of practice for most people to develop the muscle memory needed for fly casting to happen without thinking about it. So, if all this doesn’t sink in at once, you’re just a normal individual! You wouldn’t pick up a tennis racquet for the first time and expect to play with Serena Williams. You wouldn’t pick up a set of golf clubs and expect to play with Tiger Woods. Likewise, fly casting takes time to learn. Be patient, keep working at it, and it will come.

Just remember to count to four.