The magic of fish on the beach

I stood on the top of the dune and looked out at the expansiveness of the Atlantic Ocean and wondered just where the heck I was going to fish. Reports came in about big schools of fish on the beach, but no one said where. I couldn’t blame ‘em, for finding the fish along this 26-mile stretch in the Cape Cod National Seashore takes a lot of work and a little bit of luck. If I found ‘em I wouldn’t have told a soul ‘cept for my wife and a buddy or two. I’d be poker faced to the rest of ‘em, leaving them in the same spot I was in now. 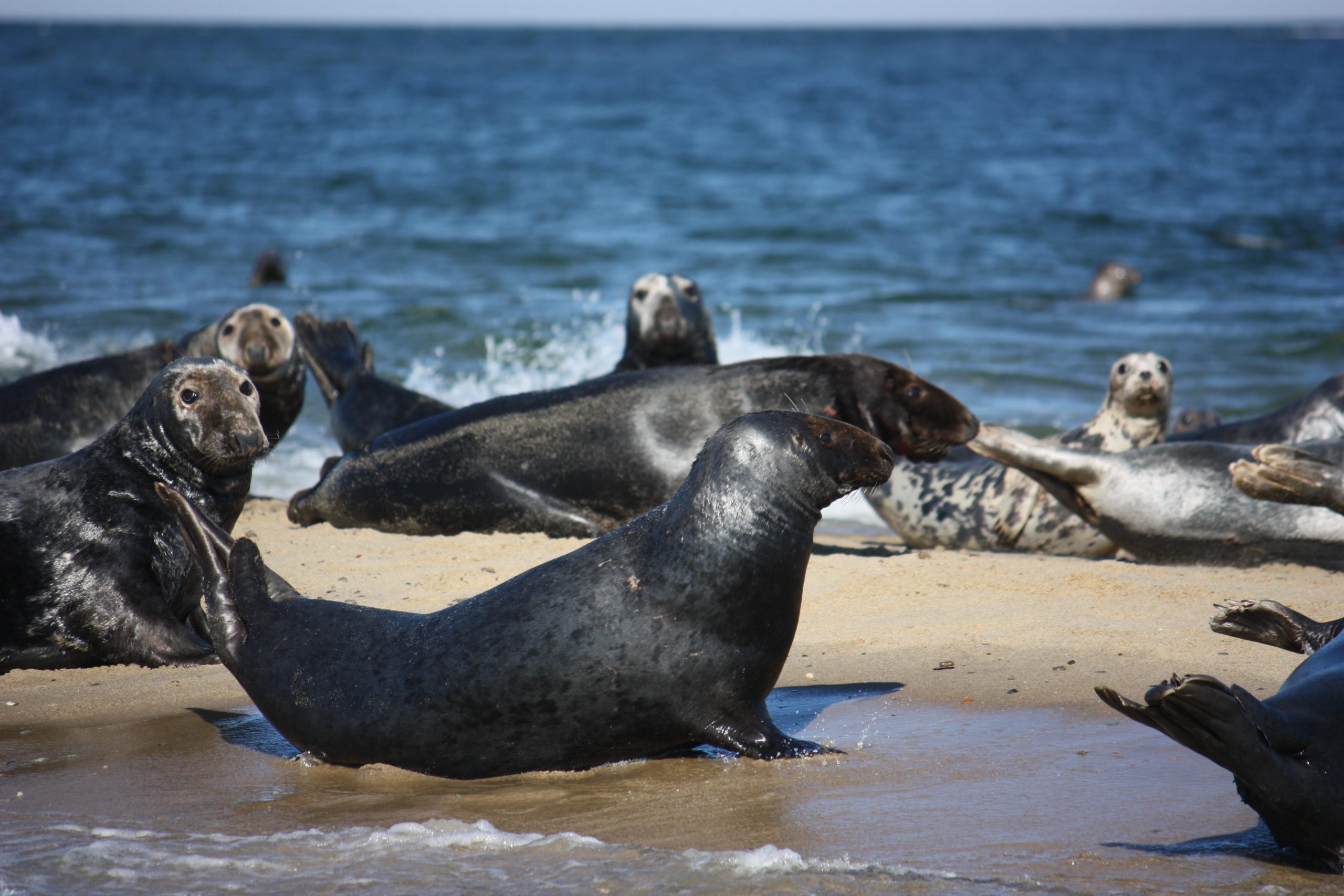 Harbor seals are cute, the Horsehead seals not so much. Fishermen don’t like ‘em much as each one can eat up to 50 pounds of fish per day. That makes for fewer striped bass to catch.

My perch in the dune grass showed me miles to the north and miles to the south. I first glassed to the north. A herd of seals flopped around on the sand. They were high and dry for one of two reasons: either there was a white shark in the water, or they were bored from a lack of fish. I glassed for a dorsal fin or either a harbor or horsehead seal carcass and I saw nothing. Maybe they were just waiting for the fish to show up. Then they’d slide into the water with the grace that only a 500-pound chunk of blubber can.

There was a lot of texture to the south. There was a rounded bull-nosed bar next to a bowl. On the opposite side of the bowl was a point bar capped by a parallel off-shore bar. Rip tides were spread in between, and there was lots of structure for striped bass to pin bait. There was a lot of energy down there, and even though it’d be a long hump I’d do it anyway. Everything starts with a decision, and for better or worse, mine was made.

I wish I hadn’t have parked my CJ5 in the lot. It’d have been a lot easier to drop down the tire pressure to 16 PSI, lock the hubs, and roll down the loose granular sand. She looks badass, but her appearance is deceiving. She’s got an inline four banger under the hoods, and when I hit the clutch and pop the stick into 4, I might eek out the speed limit. I don’t roll that fast because years of sand and salt have worn her frame to the bone. On some days I worry that if I hit a pothole I’ll have two halves of a Jeep. On other days I don’t give a rip, for I drop her top and windshield, toss her doors in the back and drive.

All I could think about now was that one mile in loose sand is like two miles on solid land. I walked the beach south to get to the texture and when I arrived I saw a big log. A winter Nor’easter likely pulled the 60-foot pitch pine from the dunes into the drink. I had to assume that the storm surge on a high, moon tide pitched it this high on the beach. Either way, I didn’t much care, for this log was a perfect backrest in the sugary white sand. I threw in a dip and sat down, for no more comfortable beach chair had ever been made.

This was a corker of a spot, and if the fish were in, they’d have to be here. I watched the waves for they come in sets of four. Following three gentle slap, slap, slaps of water against the sand there is a whoosh of current. That peak washes bait on shore and makes for easy fly selection. I watched and watched, and then I got up to see if any baitfish washed up. If there was no bait then I’d have walked all this way for nothing. I’d kick myself on the way back, wondering just why the Hell I didn’t head North? But just above the tideline was a mess of little fish. Some were dead, while others flip flopped around on the sand. There were silversides, sand eels, tinker mackerel, small butterfish, and squid. Things were looking good, so I headed back up to my log to twist up a leader. There’d be no cussin’ tonight. 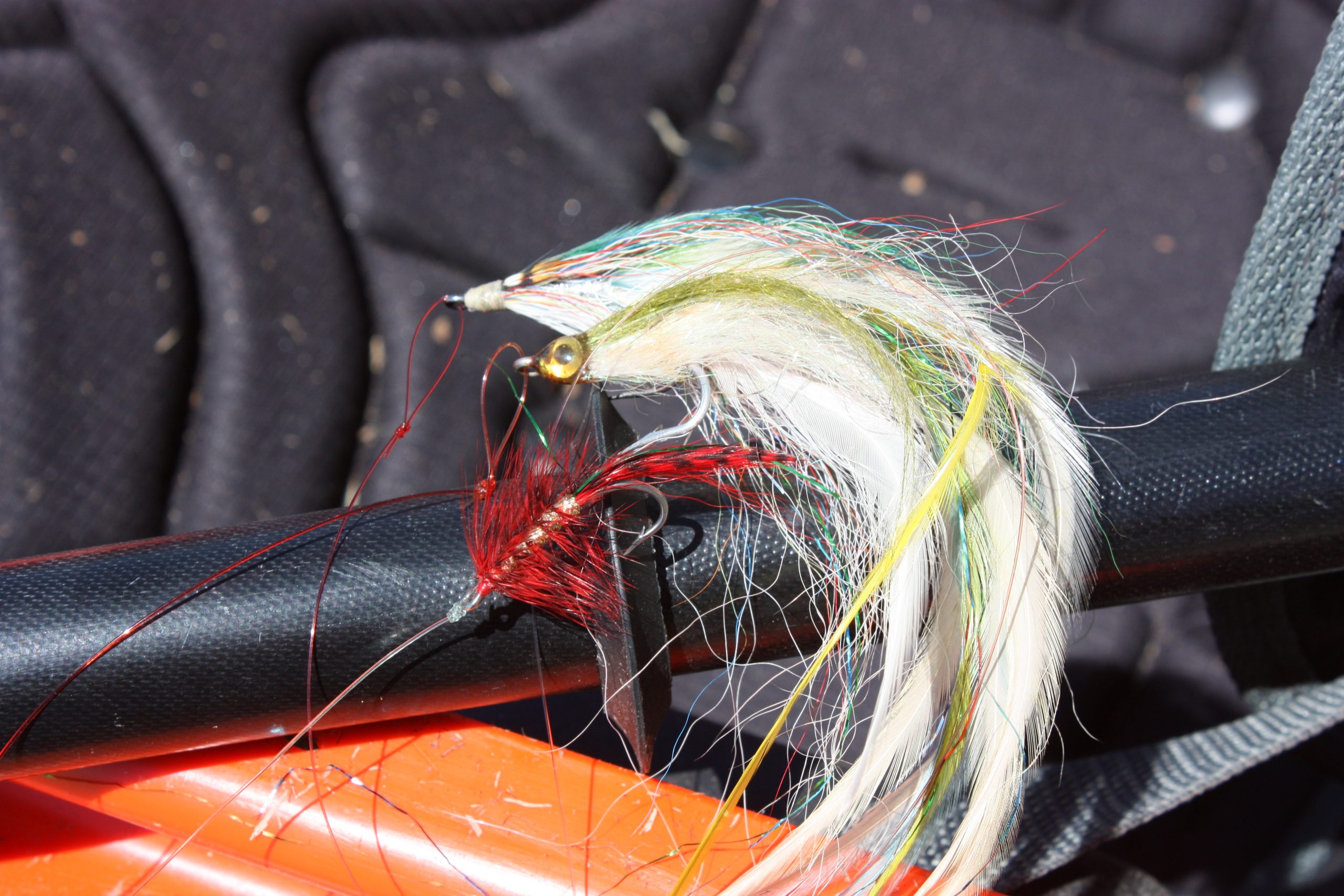 Droppers are common to freshwater fishermen, but they’re less common in the salt. They’re highly effective, especially when different types of bait are in the water at the same time.

Rather than agonize over the fly selection details I cut to the chase with a Bimini Twist in the butt and a five-fly dropper rig on down to the point. The point fly was a no brainer, for Kenney Abrames’ Razzle Dazzle is the best big-fish fly going. Next, I added a Ray’s Fly to imitate the silversides, and then a bluish-green flatwing for the tinker macks, and a brownish-green flatwing for the sand eels. A clam worm topped it off like a cherry on an ice cream sundae, but I wondered if I should have used a squid? I could always switch, but I hoped the fish wouldn’t be that selective out here.

The wind kicked up and that meant the tide turn, It was go time. Casting into 20 knots is tough, but this light-variable was just enough to keep the black flies and mosquitos away. That it was an Easterly meant the fish would be close to the beach. I stood up and looked around. Lord have mercy was it gorgeous, with bright, white stars, soft waves, a salty tang, and a sea that had greasy slicks full of fish. I was done with the thinking and on to the fishing when the moon popped up. It popped early, before sundown, and it rose steadily above the horizon line. The best part was yet to come, and that would be with a subtle tap that made my line go tight. When it did it’d all be worth it. And if no taps came? It’d still be worth it, save for the fact that I wished I’d brought my Jeep.