The Fly Shot Out Again

The fly shot out again. A brilliant orange sun sparkled on the gentle swells. The line made a tight loop against a montage of morning sky and sea.

As I retrieved the fly, the only other fisherman I would see that day caught my eye. He was just a speck moving on the beach in the distance, but he was making his way towards me.

I continued fishing, but kept track of the speck as it got larger. One of the reasons I liked this piece of beach was its remoteness. I usually didn’t see many people here. I preferred it that way.

Reaching this spot took effort. I took two busses to the ferry boat, rode the ferry across the bay, caught a kombi to the end of the line, and then walked a couple of miles. The trip took several hours, so I usually spent the night on the beach.

This past night (as with most of those spent here) I got only fitful sleep, occasionally dozing. There were never enough mosquitoes here to eat you alive, but there were always more than enough to keep you from sleeping well. Moisture from the sea and dew always made me feel damp all night. Let’s set all romantic notions aside- sleeping on a beach under the stars simply isn’t very comfortable. The sand is hard, unforgiving.

I always spent a lot of the night watching the sky, hoping to see falling stars, searching for satellites. Often, I saw both. Despite being awake much of the night, I always enjoyed it.

Besides, the fish were worth the trouble, the lack of sleep. I chased robalo, snook; handsome fish, powerful. Big. Ten, fourteen pounds usually. On a good morning I would hook three or four. The current had to run fast for them to be there. When a whirlpool formed off the point it was perfect.

I came one time on a quarter-moon. The current was weak, the sea lifeless. I never made that mistake again. I would wait until a full or new moon pulled hard on the water, making big tides with strong currents that attracted the fish. Then I would make the overnight trip to my deserted strip of beach. It’s not like there was any other choice. There wasn’t any other fishing available to me in that part of the universe. I got my licks in on the moons, watching them carefully, planning my fishing excursions around them.

The human was fairly close now. He was a typical Brazilian fisherman, a pescador– beat-up straw hat, faded, ragged T-shirt, nylon shorts, bare feet, deeply tanned, carrying a rede, a cast net, looking for tainha, mullet. I observed him intently now as he approached. The fly shot out again.

The mullet were scarce. The pescador searched hard. He did not throw the net.

He was a strong, healthy old man, wizened, a little bit bent, with a stubbly white beard, with deep creases in that suntanned face. Although concentrating on his fishing, he acknowledged my existence with a glance. “Bom dia!” I called out. He said nothing, and continued past me.

It struck me as odd, that lack of response. Brasilians are universally friendly. I’d been in Brasil for years. If you say hello, Brasilians say hello back. No one had ever not responded to a hearty “Bom dia!” The old man’s not calling back was slightly disquieting, a little disturbing. The fly shot out again.

So far this morning the fly had made that trip scores of times. Shoot out, settle to the water, get retrieved. The fibers and feathers and flash shivered in the current, breathing, lifelike. Both the fly and I were hoping for an interruption in the form of a strike from a robust snook. So far, nothing had happened. But as the old man’s form began to shrink in size, the fly stopped. The rod doubled over. As the drag of the old Medallist started complaining, adrenaline surged through me. The snook got excited, too. 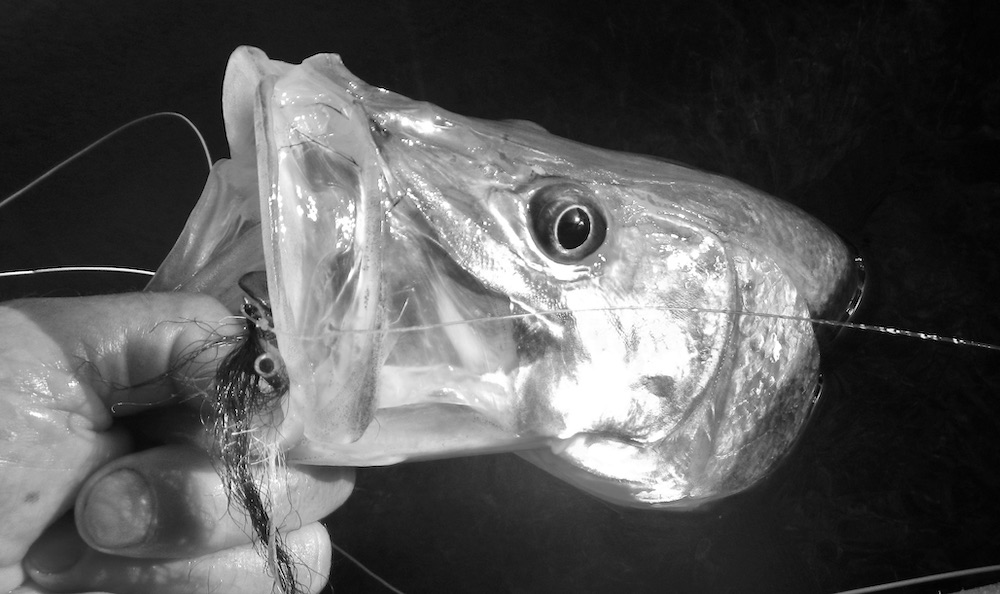 She fought hard. They always do. She ran, she jumped, she sulked, everything her instinct told her to do, everything in her power to do, trying desperately to escape. But in the end, the steel, and the fiberglass, and the nylon, were too much for her. Exhausted, she found herself staring up at me as I reached down to grasp her jaw.

As I prepared to unhook and release the fish a thought crept into my mind- “You should give this fish to that old man!” I carried the fish high up on the beach and laid her down on the sand. I removed my hat, and, placing my reel in it, put it down next to the fish. Then I ran down the beach after the pescador.

He knew I wanted something, but he only made a few grunting noises and said nothing else. He tried to ignore me and go back to his fishing. Then it dawned on me- the old man was a deaf mute.

I took a risk, grabbing his hand, and pulled. “Vem, senhor! Vem comigo! Eu tenho um peixe para voce!” “Come, sir! Come with me! I have a fish for you!” I babbled in pidgin Portuguese while I pulled him towards where I had left my rod, and the fish. He looked confused. He wanted to get away from me…

…until we got to the fish. Then his eyes got bright. He started vocalizing- “Unnhh. UNNHHH!” He was excited, very excited, by the snook! “Esta para voce!” “It’s for you,” I said again. “UNNNHH!” I unhooked the fish and put it into his hands. “Para voce!” “For you.”

As comprehension took root, the pescador stared at me first in disbelief, then with joy. His eyes filled with moisture and overflowed. Ecstatically happy now, he continuously grunted as he bowed to me over and over. He thanked me as sincerely as anyone possibly could.

At last, he turned. Taking his prize, he walked back in the direction from which he had come. Wetness followed the creases in his cheeks. His net was over his shoulder. The tail of the snook dragged in the sand. His form shrank as he walked away, until he was just a speck moving on the beach in the distance.

The fly shot out again. A brilliant orange sun sparkled on the gentle swells. The line made a tight loop against a montage of morning sky and sea.