The Fly Fishing ‘Bug’ has Bitten Me 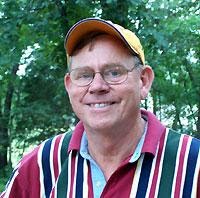 Until recently, I couldn’t tell you the difference between an Elk hair Caddis and a Prince Nymph. In case you might also be a bit fly fishing challenged, these are the names of a couple of famous flies used by fly fishermen the world over. Fly fishermen definitely speak a language known only to their ranks. ‘Double hauling’, ‘tippet’, and ‘backing’ are terms that roll from the tongues of fly fishers like water down the streams in which they fish. Learning to fly fish can be complicated, even for an old ‘rod and reel’ angler like myself but, as I’ve recently discovered, the sport is FUN!

As a youngster growing up in very rural northeast Texas, I was fortunate to live close to many small lakes and ponds that were chock full of bass and sunfish. I had a couple of uncles that were devout fly fishermen and they came to visit often, especially when the weather was good and the fish biting.

I usually tagged along on their fly fishing excursions, using a cane pole I cut from the stand of switch cane behind the house and dunked worms and minnows. Granted, I usually caught as many fish as my uncles, and to be truthful, I thought all that swishing of fly lines in the heavy cover required much more skill than I ever cared to learn. At about the age of 10, my Uncle Jack presented me with a fly rod and reel but I never used it for the intended purpose, except when I was fishing with him. I usually put a floater on the leader, a hook, and ‘doodle socked’ the baits around shoreline cover for bass and bream.

When I discovered the baitcasting reel and Texas-rigged plastic worm while in my early teens, I became a devout bass fisherman and abandoned my early training in the fine art of fly fishing. Somehow though, I always knew I’d eventually go back to my roots and attempt to master the style of fishing that my uncles were so proficient at. About a month or so ago, I placed an order with Bass Pro Shop for a fly fishing reel and a couple of inexpensive rods. For around $100, there are a couple of very well-made combos available for the beginner fly fisherman and, after a couple of weeks of fishing with both, I can attest they work just fine. White River Fly Shop is the Brand for Bass Pro Shop fly-fishing gear. I ordered the Hobbs Creek combo and one of the Dogwood rods. The Dogwood is a two-piece rod and the Hobbs Creek comes in three sections. I’ve found them both very easy to cast and extremely sensitive for detecting the slightest nibble of even the smallest sunfish. The rods also have the backbone to handle bigger bass, and I’ve even caught a couple of catfish on my new rig.

I’ve thought about this old adage many times and found it very valuable and very applicable when learning about fly fishing. A few things about the sport I KNEW but, it was what I DID NOT know that was tricking me up. There is only so much one can learn from watching videos and reading books. I needed some training from a real pro.

Enter Joe Bauman, fly fisherman extraordinaire. I met Joe several years ago when he was guiding upland bird hunts on the W.B. Ranch near Whitney. Joe is as passionate about bird hunting and training bird dogs as he is fly fishing. He’s one of those guys that doesn’t just scratch the surface but rather, digs deep and learns his interests from the inside out. I watched Joe use his fly rod a few years ago on the stretch of Brazos adjacent to the W.B. Ranch to out-fish myself and some other pretty darn good spinning rig fishermen. Joe’s in college these days in Lubbock but he found the time to give me some much-needed one on one instruction there at the ranch last week. 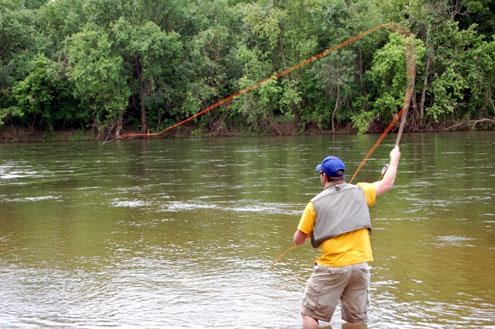 Joe Bauman casting for bass in the Brazos River. photo by Luke Clayton

The Brazos was running strong thanks to recent heavy rainfall above Lake Whitney and Joe determined the ‘fast water’ fishing was not conducive to teaching me the nuances of fly fishing. We opted to fish in a beautiful little pond with sections of open banks. Fly fishing in heavy cover is definitely not for the beginner!

I was full of questions about his favorite flies and was pushing, hard, my assortment of small popping bugs.

“Luke, when bass and sunfish are hitting bugs on the surface, those surface popping bugs will be worth their weight in gold. But I want to show you a fly that will catch many species of fish, subsurface, under all kinds of conditions,” says Joe as he fished out a little olive-looking fly. “This is known as a Wooly Bugger. The bait has many variations. and they all catch fish. If you have only one fly in your tackle box, it needs to be a Woold Bugger. It’s tried and proven, the world over.” 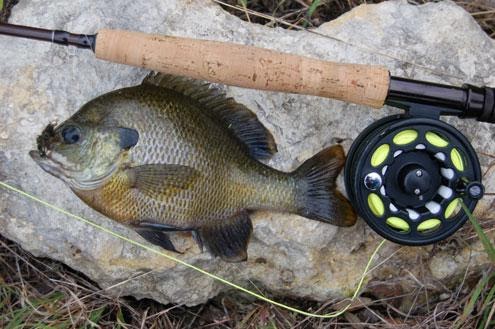 The little olive-colored fly didn’t really look like much to me. By design, it was pretty simple. When Joe added that the size we were using would do double duty on bass and bream, my confidence began to build. It soared when, on my third cast, hand-size bluegill nailed it when it slowly sank on the outside edge of some shoreline vegetation. About that time, Joe used the identical bait to land a chunky little black bass.

I’m sure we could have rigged with smaller versions of the bait and caught more bream, or larger versions and enticed some of the bigger basses. But Joe’s goal was to keep his charge for the day in the action and this fly choice was perfect.

I’m sure on future fly fishing trips, I’ll be fishing with dry flies, popping bugs, streamers, and others, but I can guarantee I’ll always have several of Joe’s hand-tied Wooly Buggers in my arsenal. In olive color, of course! They work! 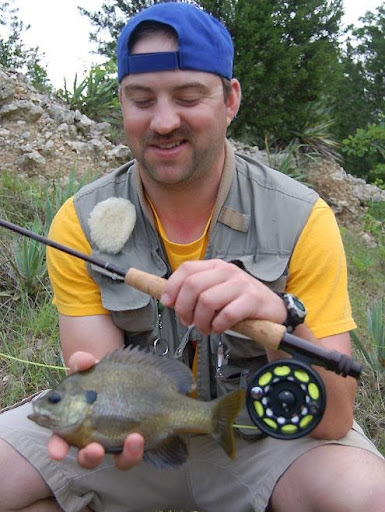 Fly fishing pro-Joe Bauman shows off one of many sunfish he and Luke landed with their fly rods. photo by Luke Clayton.

Listen to Outdoors with Luke Clayton at http://www.catfishradio.com/. Contact Luke at lukeclayton@prodigy.net