I had worn that old hat from Alaska to the Florida Keys. But I could not bring myself to wear it back to its original home in New Mexico.

CHRISTMAS MORNING. And the high country was covered with ten inches of fresh snow that had fallen during the night. The road across Sam’s Gap was covered in snow and ice and we couldn’t get across the mountain from Tennessee into North Carolina to have dinner with my wife’s family. But here in Watauga we only had an inch or two of light powder on the ground.

So with plenty of leftovers already stuffed away in the ’fridge and Mary Jane curled up with the cats, the river and the falling snow began tugging at my soul and I decided to go trout fishing.

I always keep a couple of fly rods rigged and ready for such errant impulses, and my waders and landing net and belt pack are ever on standby. So I stashed some cold turkey and dressing and a slice of apple-peel pie into a couple of zip bags, gathered up my gear and headed for the river.

I was a mile down Watauga Road before I realized I had forgotten my hat and turned back to retrieve it.

IT’S A GOOD HAT, old and endowed with the stains of an honorable life, given to me long ago by my friend Frank Simms in northern New Mexico. And now, many of its stains were my own.

It had been made long ago in Texas from the finest hare-and-beaver felt, and hand formed by women and men who knew what a good and useful hat is supposed to be. It was a classic Resistol with a wide, swooping five-inch brim, and it fit me perfectly. It was properly tattered by years of use in trucks, on foot and on horseback, in snow and rain and high desert heat, with good honest sweat stains circling the base of its brim.

It was trimmed with a narrow warm-grey ribbon and had spent the first half of its life in New Mexico and Texas and Colorado, steadily working its way from New to Vintage.

At one time it had been a very expensive hat. But now it was priceless.

I had worn it for years in all manner of weather and thought, from my home here in Tennessee to the sprawling tundra and mythic salmon-and-trout rivers of Alaska, to the relentless sand and salt and sun of the Atlantic coast and the tropics.

But I had worn it back in New Mexico only once—one cold December night in Santa Fe during a blizzard as I fetched my travel bag from the truck when I pulled into Frank’s big adobe house at the end of a grueling three-day run. For a moment, Nolene had thought that I was Frank as she opened the front door for me as I fumbled with the handle. I surprised her as I knocked the snow from its brim beneath her eve and set the hat on her long wooden table as she lifted the heavy duffle from my shoulder, and that’s where the old hat spent the night.

The next morning Frank and I headed north at daybreak. But when we got up to the ranch, I left our old hat in the truck—for I could somehow never quite bring myself to wear it there where he had worn it for the first part of its life.

But now on this soft and silent Christmas morning back in Tennessee, I could wear it fishing by myself.

I THOUGHT ABOUT THE DAY the old hat first came to me. For years I had secretly hoped, without telling anybody, that someday someone there at the ranch might give me a hat—preferably one that had meant something to them and they were now finished with—not because I couldn’t afford to buy one myself, but simply to make it okay for me to wear it there and feel like I had earned it. For I had seen too many pretenders in New Mexico and Texas and Colorado, most of them transplants from the east and especially from southern California, all dressed up the way they thought a real buckaroo should be dressed, wearing cowboy hats that were way too prissy and overdone.

My dear friend Jeff Wood’s hat would have worked fine for my purposes, for Jeff is the real deal. It bore a modest three-and-a-half-inch brim and had been properly worn and properly abused, as all good hats should be. It was one of the most derelict pieces of attire I’d ever seen and would have been ideal for me. I had all but begged him for it, whenever he might be finished with it. Even offered to buy him a brand spankin’ new one to replace it. But Jeff is a proud and stubborn man, with his own mind and ethic, and he just couldn’t bring himself to burden me with what he considered to be such a decrepit old hat and so had given it a proper burning instead.

But Frank understood and gave me an old hat he had long ago retired and abandoned to the upper corner of his saddle shed.

What goes on inside one of Frank Simms’ hats is often strange and mysterious, and I’m sure that this hat had been privy to many an odd and unfathomable thought. So now on this cold Christmas morning in Tennessee with the snow settling softly on its brim, I sat wearing that old hat myself on the tailgate of the truck, thinking thoughts of my own as I slipped into my waders and slid my belt pack and landing net around my waist and eased into the river with my fly rod.

THE WATAUGA WAS RUNNING THICK with snow and slush, and it perfectly reflected the muted colors of the chilled pewter sky. I was using my standard rig—a dry fly at the end of a ten-foot hand-tapered leader, with a lightly weighted nymph tied below it on a two-foot wisp of 6X tippet. I had little hope that anything would take the dry fly on such a bitter cold morning as this and was using it primarily as a strike indicator. But to my delight, a nice little rainbow sipped it from the surface on my third cast and I brought the trout to hand and released it.

It wasn’t the only fish I caught that day. But it was the only fish I needed. For the day really wasn’t about catching fish. Instead, it was about the fishing. And so I fished.

I fished for trout, I fished for time, and I fished for memories. I fished because I needed to fish—to catch up with myself and enjoy the moment at hand, reveling in that rare and elusive experience when future and past intersect and you find yourself living totally in the moment, immersed in the reality of all that is going on around you and inside you, perfectly in tuned with the universe, your senses open to the essence of being.

And I caught trout. I caught a lot of trout. But this is not a story about catching trout.

Instead, it’s a story about this old hat that’s sitting here beside me as I write, so I won’t bother you with the details of how big or how small the trout were, or how many trout I caught. Fact is, I don’t much remember myself—except to say that it was a soft and soulful day.

The snow continued to fall as I fished well into the afternoon and then into evening—not a heavy snow, but a light and silent snow, a snow that brought peace to my spirit on this, the most peaceful day of the year.

And when the snow had finally had its way with me and the fishing was complete, I took off that old hat and laid it and my fly rod aside, splashed a handful of cold water on my face, then sat there on the sandbank and enjoyed a cold Christmas dinner—warmed by the place and time and the unseen presence of my friends back in New Mexico, with the Lord here at my side on His birthday.

And though I couldn’t quite recall what I had done last Christmas, and probably won’t remember much about next year’s either, I will never forget the one I spent alone on the river that cold and fruitful day.

Warm inside my old weathered hat. 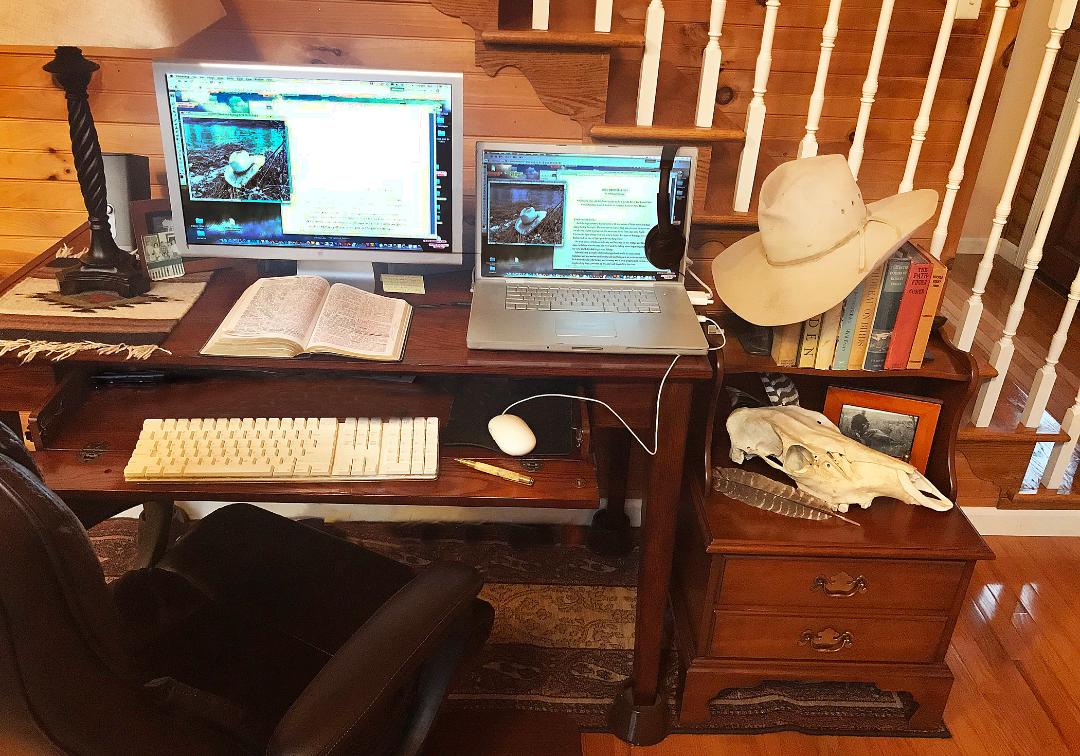 The author appreciates your comments, questions, critiques, and input. Please keep in touch at Mike@AltizerJournal.com.

Copies of Michael Altizer’s books, THE LAST BEST DAY, NINETEEN YEARS TO SUNRISE, and RAMBLINGS—TALES FROM THREE HEMISPHERES can be ordered online at SportingClassicsStore.com. Or simply call 1-800-849-1004. You may also purchase his books by clicking on the RIVERS AND FEATHERS “BOOKS” page.