The Arkansas River runs for 1,400 miles from Colorado to Oklahoma, across Kansas and Arkansas, before entering the Mississippi. One of my long-time fishing buddies, George Campbell, and I had flown 1,500 miles to experience the headwaters of this mighty river firsthand. 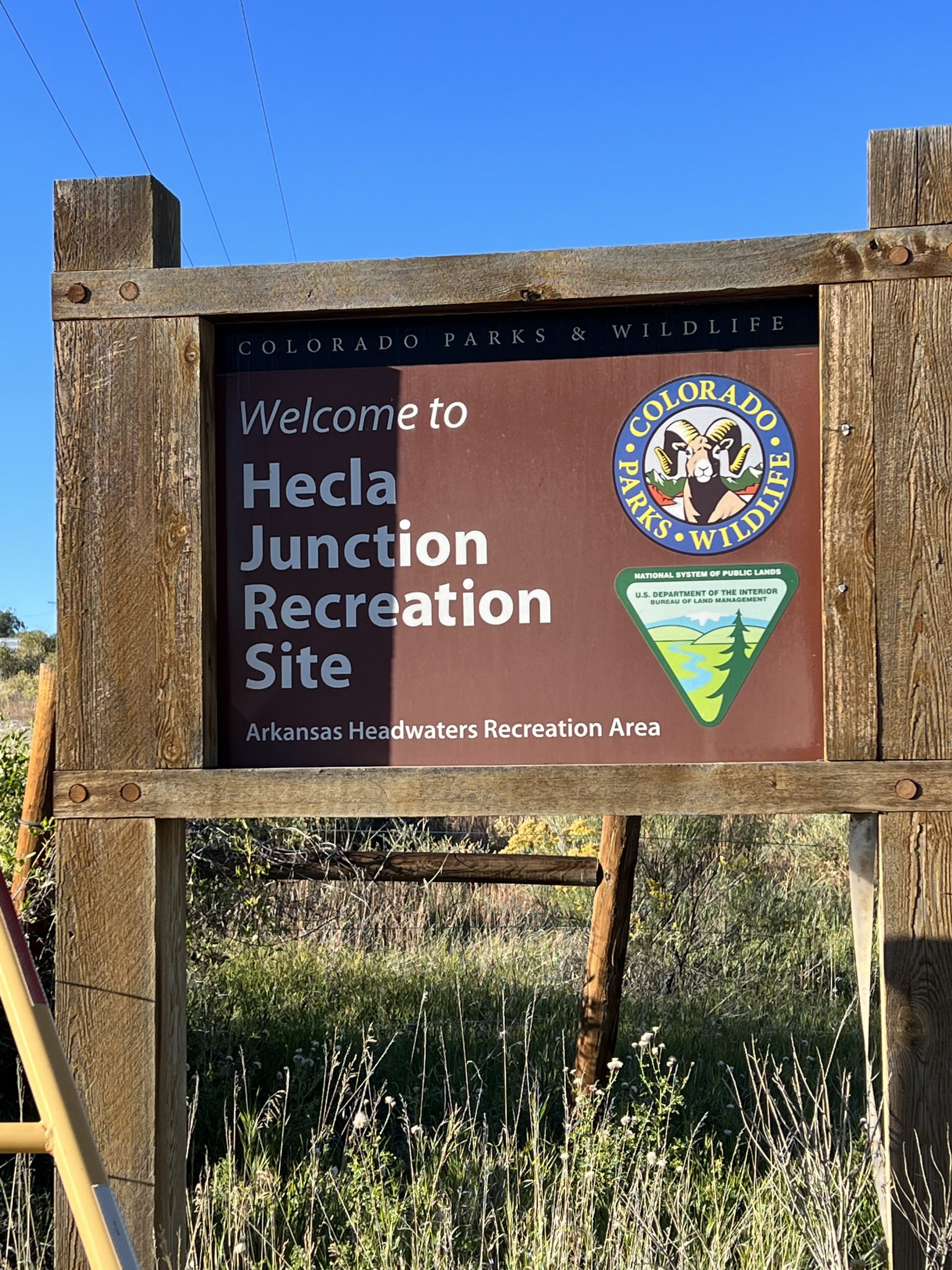 As with any fly fishing trip plans, maps were closely examined with notes written as to where public and private property access points were located, and roads were highlighted in yellow. With those chores completed, it was time to tie some flies. Compound this prep with high expectations and long-range weather reports, and it was finally time to head west and fish.

We decided to begin our adventure near Salida and fish north to Leadville and the headwaters of the Arkansas River. We included a quick trip to Pike’s Peak and a late afternoon visit to the famous Silver Dollar Saloon. We had collaborated for months and were exhausted from the overstimulation of internet research. Break time!

Previous experiences fishing in Colorado in late September brought flashbacks of temps in the high 60’s one day and then encountering snow the next day, depending on elevation. Lucky for us, the temperatures stayed somewhat mild and very dry for the most part during our trip of eight days trying to imitate trout bums.

Local knowledge from the fly shop had pointed us to start fishing at Hecla Junction above Salida, as the river was extremely low and clear, which allowed wading access to cross. This section of the river is known for its white-water flows and is a focal point for rafters and kayakers. But low water allowed us access to taste the vastness of Browns Canyon by foot and fly rod. 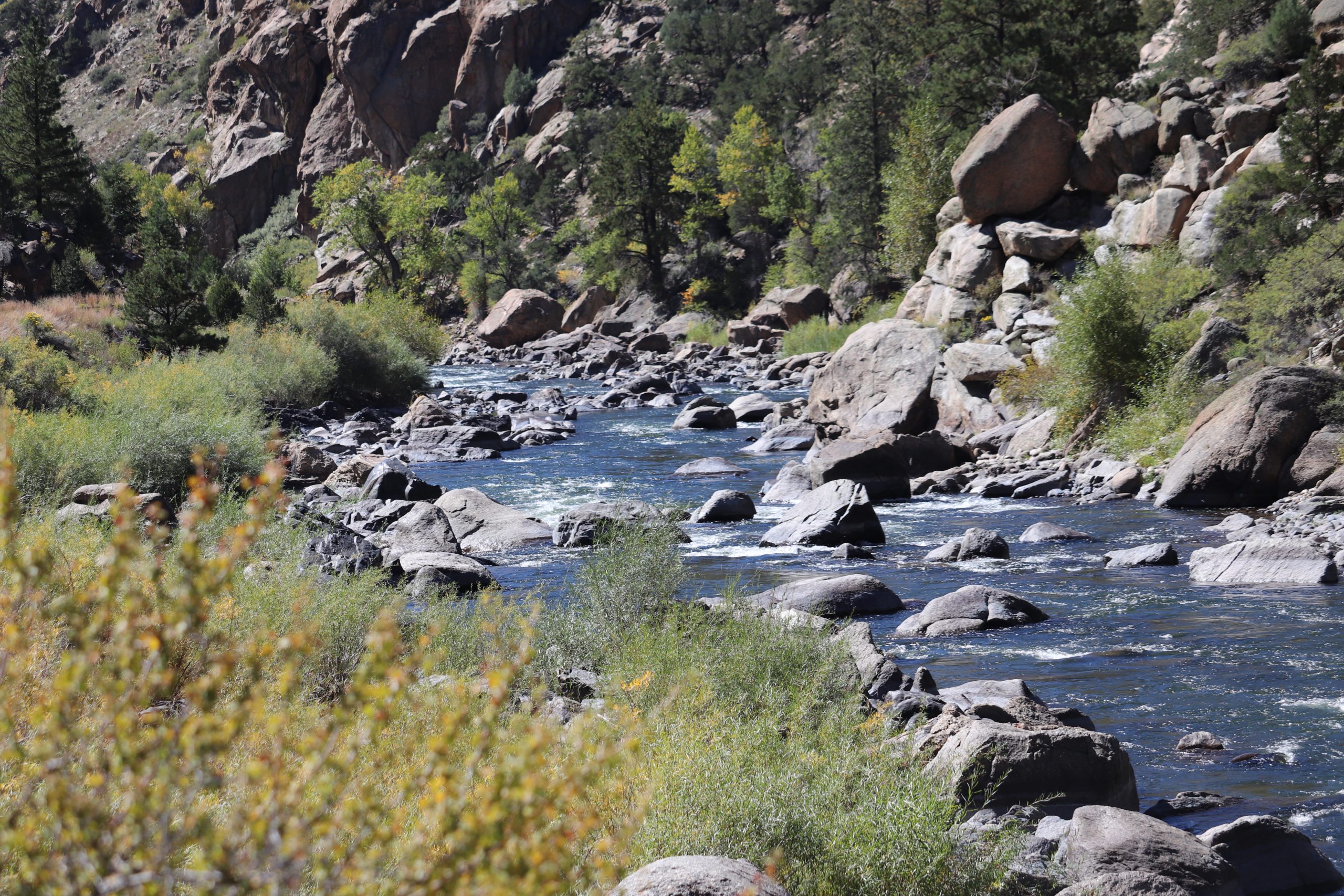 As we crossed the river and climbed up the far bank, I gazed down the river at its pristine persona as it carved through this uncorrupted and unspoiled maze of granite, canyon cliffs and boulders. It was as I had imagined, wild, clean, and beautiful.

Remnants of a once-active railroad provided empty tracks and a hiking path through this rugged terrain. As we walked, a keen eye was always scanning ahead in case we met any of the local wildlife calling this area home, such as black bear, mountain lions, elk and big horn sheep.

It was decided that we would hike several miles and then start looking for a drop-off point to enter the water. Behind the froths of white foam, situated in pockets behind the boulders where the currents were slower, we hoped to find willing, wild browns hungry and not overly picky about the fly they chose. 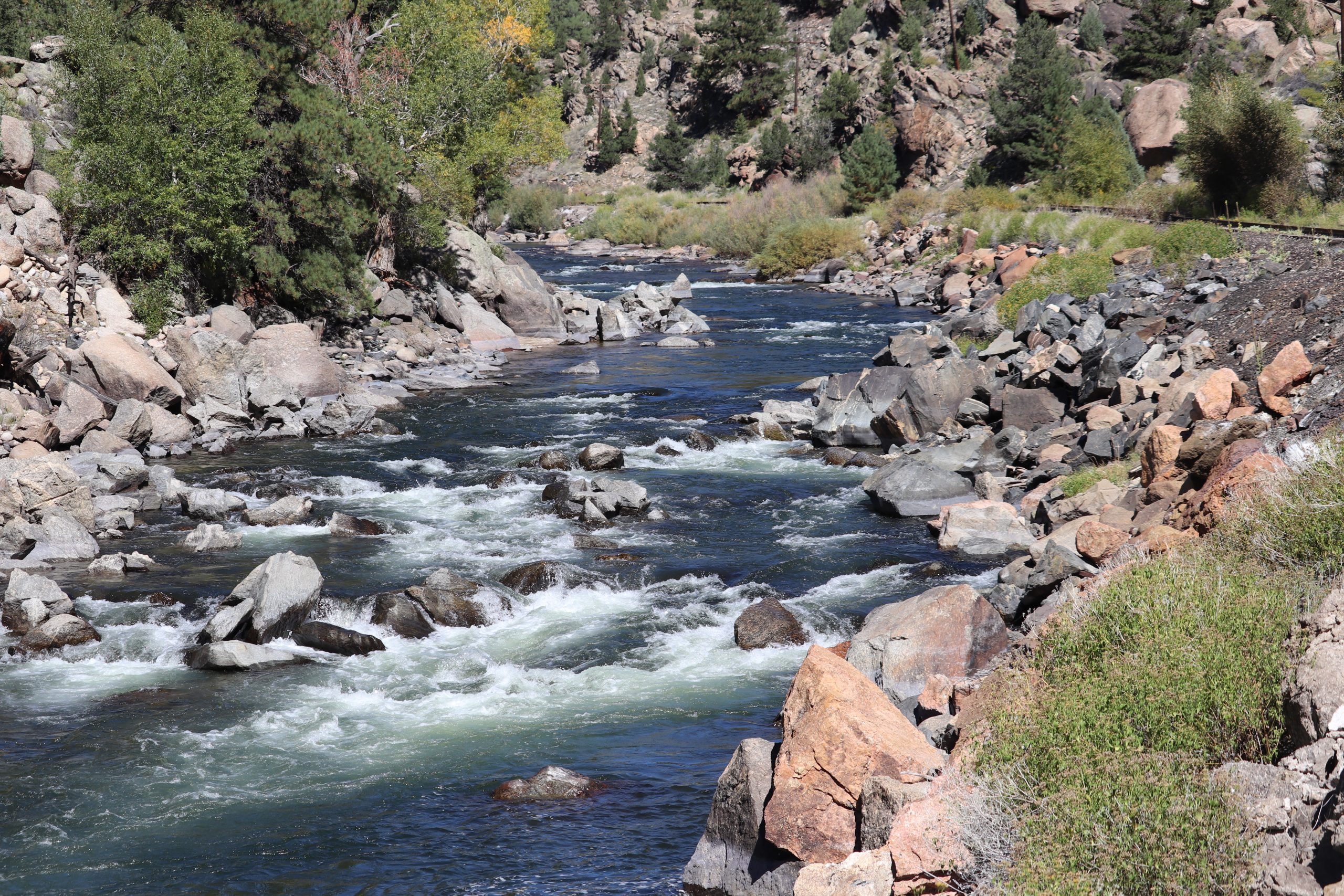 Once leaving the recreation site in our rearview mirror, we saw no one. After deciding to wander upriver instead of down, the only sound heard was that of a raging river below us and our footsteps crunching gravel between the railroad ties. The breadth of where we stood and the history that came before us overtook our thoughts and discussions. No fishing trip is complete without a prior read on the history and its relevance to an area.

Eventually, we walked in silence, trying to inhale all that Brown Canyon had to offer, even before we began to fish. The deep blue sky held up an intense fall sun which appeared to warm the earth one last time before being overtaken by gray clouds of snow and the winter solstice. Continuing our hike and enjoying the landscape confirmed months of planning and preparation that, indeed, we might be at the right place, at the right time. 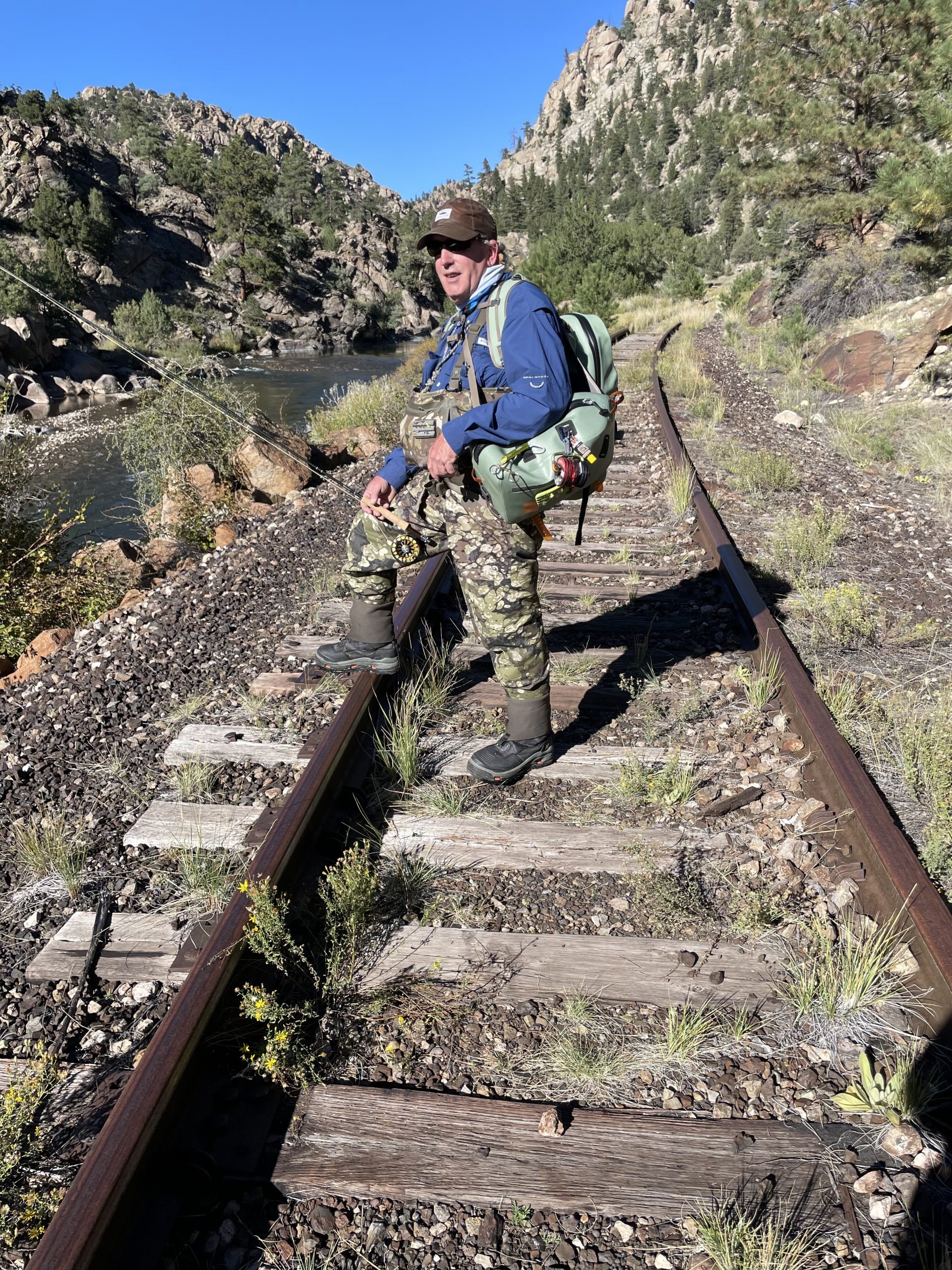 It seemed that every inviting pool and pocket of water called our name. Resistance to fishing was hard, but we decided to be at least two to three miles above the recreation center before starting to fish, hoping to find those “untouched” fish that swam wild and ignorant of our feathered imitations of insects on steel.

After about an hour’s hike, as the river made a hard turn left, George decided to climb down the 40-foot escarpment and bushwhack through the willows to a large pocket of holding water situated behind two large boulders that deflected the rapids to the center of the river. It was decided he would join me several hours later and walk the tracks until I was found.

Walking further around the bend, I saw human life approaching in the form of two kayakers playing in the swift currents, twisting and turning their boats in the white water. I could only imagine the river’s strength when at full pool.

Ambling onward down the railroad tracks looking for that perfect spot to begin fishing grew difficult. The whole river looked inviting, but I had in mind to find a section of the river which had a long tail out below the rapids and provided easier access to an old man.

After about twenty more minutes, I turned around and faced back to where I had been, mindfully retracing my footsteps. The railroad tracks seemed to disappear into the massive rock walls that enveloped me, arid and beautiful, dotted with sparse, green pinion pines sitting on ledges and then willows revealing their yellowish fall brilliance along the riverbank. Looking up towards the sky reminded me of a large peephole shining light into a box surrounded by high rock formations.

A little further, and there was “my” run. A long, flat, and clear tail out from where the river turned and bent slightly and slowed. A great place to spend a few hours fishing thoroughly and enough shade on the far bank to rest and have lunch later. My perfect spot. I descended the short climb down to the end of the tail out. Looking down at the sandbar, I noticed rather large animal tracks, and again, I was reminded I was only a visitor playing in their backyard. 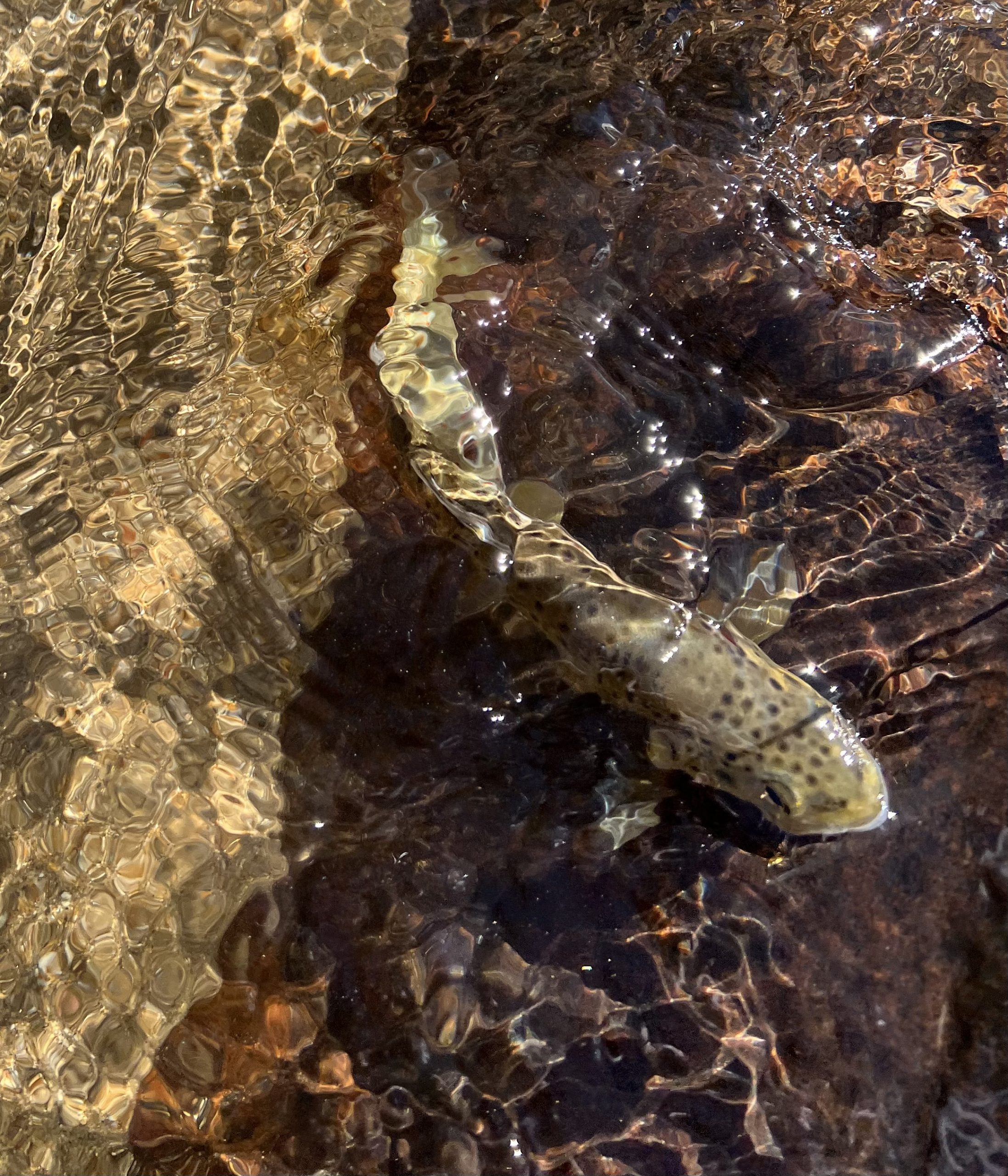 Dimples from small caddis flies hatching to adulthood dotted the water’s surface as they dipped and danced and tried to fly erratically in the softer currents. The water was clear, and the fish spooky. I put a 16 gray Elk Hair caddis and trailed a size 20 nymph dropper. Roll casting both flies along the edge of the foam lines, a small brown appeared and sipped the caddis fly right before the current began to cause the flies to drag. The first Colorado brown of the trip!

I continued fishing the edges and eddies methodically and quickly picked up several more browns, an equal amount on both dry and dropper. Indeed, the long leader with small flies with 6x tippet was the perfect combination. But nothing lasts forever. For a while, the fish seemed willing and hungry, but as noon approached, it appeared that I became the only creature hungry.

Crossing the back of the tail out, I headed for shade, a wrapped-up biscuit from breakfast, and a power bar. The water was cold, but the sun was intense, and the surrounding rocks seemed to absorb its heat. Laying in the shade of a willow, thankful to be here, I watched the first two fly fishermen seen all day walk down the tracks looking for their fishing destination.

It wasn’t long before my buddy came up, crossed the river, and shared my shade tree. Comparing flies, fish stories, and the excitement of being in Browns Canyon for the first time made all the planning and anticipation worth the effort. And this was only day one of our eight-day adventure. 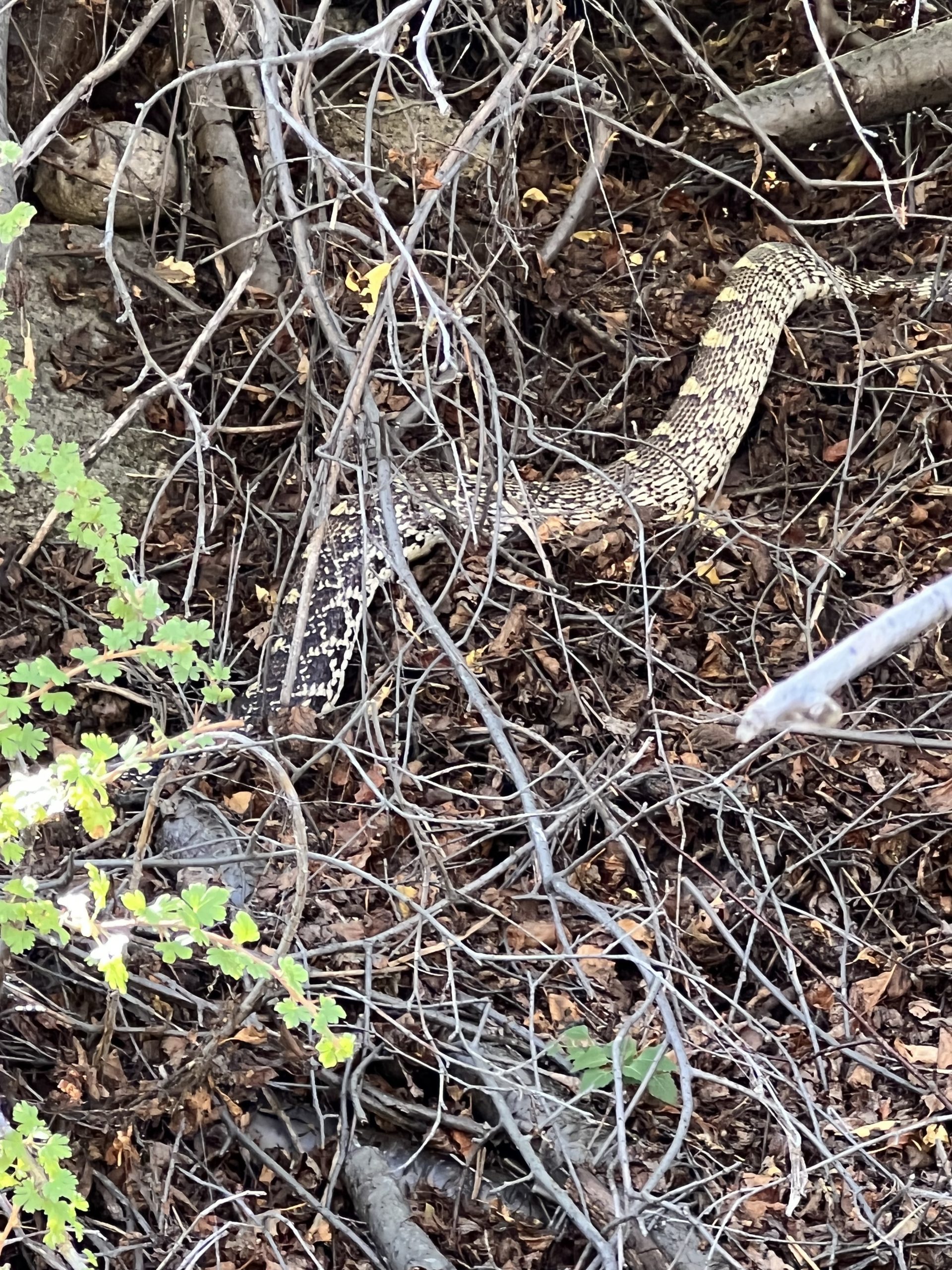 After our shore lunch, we noticed several dimples from feeding trout appear near the head of the run, which signaled time to fish again. As I turned around to grab my pack and fly rod, another visitor quietly appeared and wanted to also share my shade tree. On a rock perched above us, a rather large bull snake estimated at six feet long, had evidently just finished lunch as well. I quickly decided to let him have my willow tree shade and go catch some rising fish on a dry fly.

Little blue-winged olives hatched for the next few hours, and the fishing was spectacular. We both fished dry imitations in sizes 18 and 20 throughout the long tail out to rising fish, respectively, and stuck some nice browns. Neither George nor I hooked any browns larger than 15”, but we consistently hooked them fishing our favorite way, with dry flies.

As fishing slowed, we decided to cross back across the river and walk the track further up to enjoy the scenery and see new sights. Tomorrow would bring a new day and another section of the river, but for now, we just wanted only to be here. 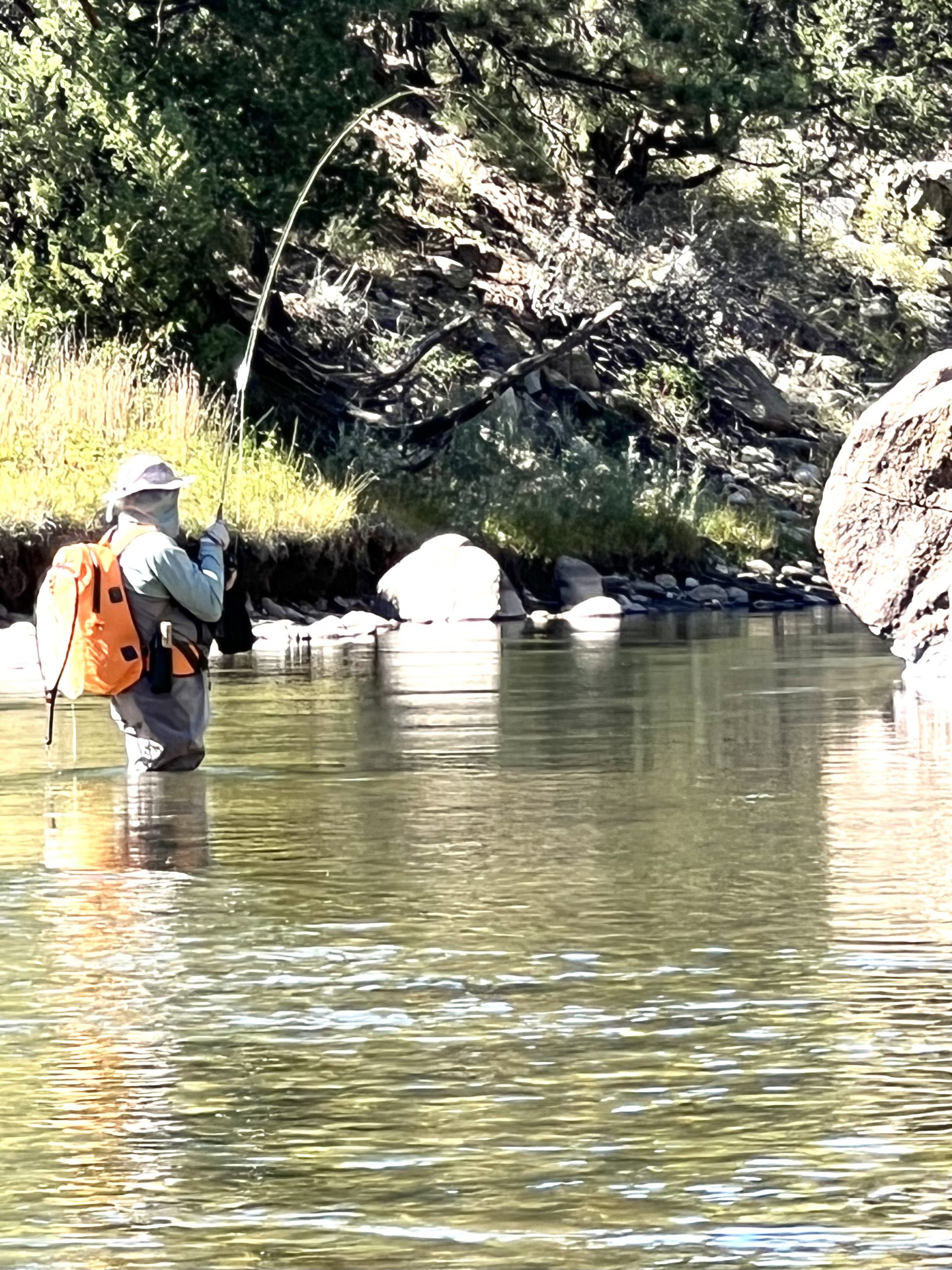