The Back of Beyond

Daylight begins to filter through the tops of yellow poplar, white oak, and Eastern hemlock trees, and soon floods the understory of this mountain cove, deep in the Carolina hills. Mountain Laurel and rhododendron are woven together into an impenetrable sea of tangled boughs of green. Laurel hells– what they are referred to in this region– grow up steep walls of rock and bracken fern, giant deadfall trees and green mats of moss, wherever it can hold on. A place like this is hard to find your way through because it is easy to get turned around in, and if a man calls himself lost out here, he is truly lost.

Back in this cove, I am miles away from any paved roads. The only modern sound I have heard came from an airplane flying overhead just before nine o’clock this morning. A pileated woodpecker’s cries echo in the canopy of trees just below where I am standing. Far off, a crow caws. My phone doesn’t have a signal here, and I don’t know whether that is a curse or a blessing, but the fact that I have no way of communicating gives me more of a sense of disconnection from the outside world.

The remoteness of this land is surprising to those who do not associate the Upstate region of South Carolina with an Appalachian wilderness, but the views here are absolutely breathtaking. Standing on a high ridge top in northern Greenville County, one can see the wonder of the Blue Ridge escarpment rise from the green and fertile lands of the Piedmont and roll into thousands of miles of ancient mountains and foothills, stretching up the eastern seaboard, well into Canada.

This land was once home to the Cherokee people, and before them, groups of archaic paleo indians that hunted and gathered food on the ridges and valleys of these ancient mountains. Hernando De Soto encountered these native peoples, and years later, so did William Bartram on his expedition that led him through this once vast and expansive wilderness. 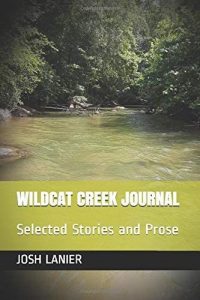 European settlers made their way through these mountain passes in search of a place to call home, where they could raise their families and build small communities. The Scots- Irish and English brought with them the traditional skills of farming and hunting and the age-old tradition of whiskey making. This was considered a birthright by many families in this region, referred to historically as the Dark Corner.

Descendants of these first European settlers still live in the hills and hollers of the Blue Ridge. Many family traditions have passed from one generation to the next. These people have a deep connection to the land and abiding love for the nature of this place. They know the names of things, locations, and they know the peaceful solitude of a mountain cove on a cool Spring morning.

I came here this morning for these hills’ solitude and the disconnection from the stress and worry of “civilized” life. I came here searching for treasure hidden in the calm waters shaded by hemlock and rhododendron: the beautiful Brook trout– mottled greenbacks, flecked with red and yellow spots. Tiny, fragile, and to me, the most sacred of all fish.

I make my way down the switchbacks and follow the sound of flowing water to the bottom of a ravine. The vegetation is so thick here that the sound is muffled at times, causing me to stop in my tracks and listen to gain my bearings once more. I have to take care not to tangle my fishing rod in the laurel. It is a homemade rod– a simple stick and string, my version of what the Japanese call Tenkara. A medicine bottle in my pocket would contain a few caddis fly imitations and an extra leader if I were to snag on a limb and break my line.

Brook trout live in hidden pockets in the backcountry, in places where you’d never suspect fish would be. No trout fisher worth his waders would ever disclose where they found these fish thriving, nor would they leave any clues that would lead someone to their spot. Not everyone respects the beauty and fragility of these wild natives, and that lack of concern can lead to a depletion of the trout and loss of their habitat.

Knelt beneath a hemlock branch, I dapple my fly on the surface of the water. A small shadow darts through the deeper water at the head of the pool. My fly drifts down, under an overhanging rhododendron. Two shadows appear, one of which rises to take my fly from the surface of the water. With my heart quaking in my chest, I wait for the trout to turn back toward the depths, and I raise the rod tip and feel the tingle and the shaking of the tiny speckled trout in my wrist.

Keeping the fish under the surface of the water, I admire the colorful markings on the sides and belly of this holdover from the last Ice Age. I am humbled to have had this experience, knowing full well that its habitat is quickly disappearing. With a word of gratitude, I release the fish and watch it vanish into the dark water.

As I sit for a while, I listen to the water running over the rocks. I feel the breeze on my skin as it flows through the trees. I find clarity and a sense of connection. To the earth and all living things, in the back of beyond.