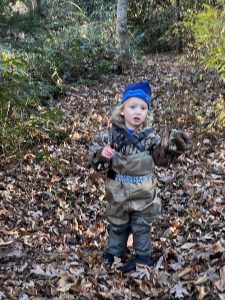 The holidays are special times and should be a reminder of all things to be thankful for all year long. In most cases, they also offer a few days off for fishing trips, both pre-and post-Thanksgiving! This year was to be no different except for the fact that I had a new fly fishing partner, my 4-year-old grandson.

The rain had been a scarce commodity in North Georgia and the rivers were low and clear. Perfect for a beginner to learn wading skills. I had to remember that my fishing buddy was barely belted high and I could not fortress across the deeper holes but must pick and choose parts of the river to stand with less current. Being a low gradient river, sandbars dotted the bank which afforded easier access in several locations. Clearwater never looks deep and is deceiving, especially to the untrained wader. I had planned to keep him very close and physically carry all 45#’s of a grandson to various eddies and sandbars once we began to fish. In case of emergency, I always had his dad positioned to lend a helping hand!

As he began to put on waders, I could tell he was excited about this new adventure. An enthusiastic twinkle in his eye appeared along with an enormous smile. Unlike dressing for school, there was no argument about the fit or how different the waders felt. The waders were big but were the smallest to be found. I could have wrapped him in a waterproof cocoon if pulled up and over his head. It was my responsibility to keep the straps from choking him as they pulled down on his shoulders. I took an old military belt and cut off the excess and buckled him under the armpits. He was set to wade now. The walking pace to the river almost turned into an athletic event.

We had tied some flies previously together and had cut the hooks off to prevent first aid measures. I tied a woolly bugger on the leader tippet replicating the one that we had made weeks before and hoped he wouldn’t notice the difference. This fly was on a barbless hook and ready to sore lip a few fish.

Last-minute instructions were given as we began to wade. Just like everyone I have taken fly fishing over years past, when wading a river for the first time, standing in the water and feeling the current pull begins a connection and affection to the river which I hope will last a lifetime.

“Papa, I’m not wet!” he exclaimed as he stood knee-deep and smiling. Then the parent in me had to remind him that he would be soaked and cold if he didn’t listen. The water temperature was noted as cold when he stuck his hands underwater and determined that they were better off out of the water than in it. 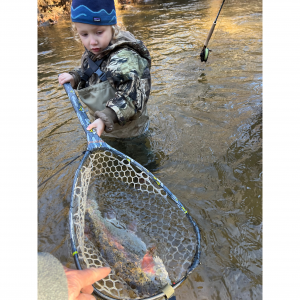 I picked him up and crossed the river. Together we eased down the far bank to a run I knew possibly held a few fish and prayed for them to eat the wooly bugger. Teaming up, we roll cast across the run and stripped the fly slowly as it entered the current. On the third cast, prayers were answered. I held the rod up with one hand and coaxed him with the reeling portion. Anticipation and adrenaline make a person of any age wind any reel as fast as possible so as not to lose the fish but indefinably that becomes the end result.

The attention span of a four-year-old is usually only a few minutes but I had his full attention and determination now. Maybe it’s the pull of the rod that begins the addiction and it was time for another fish. Several more cast yielded a few strikes but no bites. We changed locations to a different sandbar and fished the lower run from a new angle.

Fish on and the smile continues. This time patience played a much larger role as he brought the fish in. Handing the rod off, he was determined also to net the fish himself. We had spent some time netting leaves in the water and reviewing the concept of sliding the net underneath the leaf instead of “poking” at it seemed to resonate. As the fish head was lifted, he became more focused and listened intently while gently sliding the net underneath the fish and lifting up! Success at last! 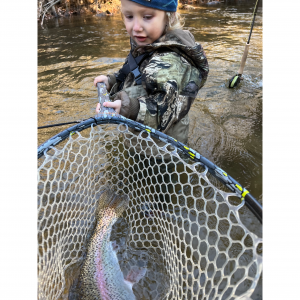 Standing in chest-deep water he stood there holding the fish with such an impeccable smile. Memories made on the river should last a lifetime. With a delighted tenderness, he revived the fish in the net and watched it swim off into the current. It was determined that wet sleeves and cold hands required some stream bank dry fun for a while.

Throwing sticks and rocks in water is an ageless pastime. Walking trails, running up the mountain and back down, answering inquisitive questions, laughing, and having a quick snack streamside top off an incredible afternoon. The fishing was great but the fun the three of us had was greater. So much to be thankful for.