Some fly rodders target particular species of fish. Out here in the dunes, the striped bass is a targeted fish. They’re fun to catch, they are caught in a variety of places from rock gardens to beaches to rips and on flats, and their white, flaky meat makes for delicious table fare. Most fly rodders consider a bluefish to be a fish of opportunity. That means its fine to catch ‘em, but no one really goes looking for them on their own.

Or do they? I’m a fan of the bluefish, and my wife likes catching ‘em more than striped bass. They’re savage eaters and feed in a chop-and-spin way. It’s almost not fair to a school of baitfish, for when a pack of blues corral the bait, they use their razor-sharp fangs to chop off the tails, to spin around, retarget the fish drifting dead in the water, and devour its head. The blues work themselves into such a feeding frenzy that they eat until they are full, vomit, and begin eating again. All that remains from bluefish blitz is a slick of fish parts and oil. I’m told that bluefish can see as well out of the water as they can in the water, so those Laughing and Black-backed gulls that drop down to pick up the fish scraps should be a bit more careful.

You are what you eat:

Identifying what bluefish feed on is easy. Get one in the boat or on the beach and they frequently leave their last meal for your review. Bluefish are savage when they’re on the bite and they are virtually unselective; it’s common to find several different types of bait spraying from their mouths, ranging from butterfish to silversides to menhaden or bay anchovies. When Mr. Bluefish is hungry, anything is fair game. A Brit I took fishing one time called them “Cheeky Little Monkeys.” I’d have to agree. 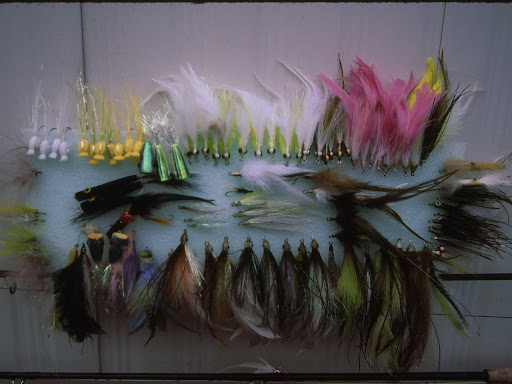 Sometimes they like color, other times they prefer natural.

Sometimes, though, bluefish can be selective. Racer bluefish are the early season transplants and have enormous heads, long lengths, and lean bodies. They are fresh off of their migration and respond to flies very selectively. In-season bluefish in shallow water can also be skittish. When they key in on small bait such as sandeels and silversides in skinny water they can be as fussy as a trout. Those times of selectivity are seldom.

What you get from bluefish, particularly Fall run bluefish, are savage hits, hard fights, and occasional jumps and tailwalks. They range in size from snappers (young of the year) to three-to-seven pounders often called ‘cocktails.’ Big, double-digit fish are called choppers or gators. Whatever size of bluefish you’re catching, the fact is that you will lose terminal tackle and most of your flies; even wood poppers, will be destroyed.

The Fight is On: 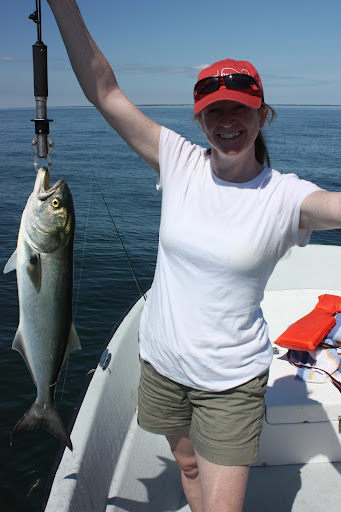 Bluefish aren’t trout, so don’t be nice to them. When you hook one, don’t keep changing the direction of your rod so as to get control over the fish’s head. When you do that with a bluefish you frequently pull the leader across his mouth and give him an opportunity to bite through your shock tippet. Keep your rod in one constant position, maintain pressure, and fight the fish from the butt of the rod instead of from the tip. Your fishing position should be slightly above the fish or slightly below the fish. You might need to walk around the boat or move up the beach, but keep the tension on the fly and keep your line tight at all times.

Use pressure to get that fish out of the school. Rival bluefish will converge on a fighting fish to see about a free lunch. Allow your hooked fish to stay in the middle of the school, and odds are you might say goodbye to your 100 dollar fly line. Muscle him to the edge of the school by applying consistent pressure, and after you do show him no mercy.

As with salmon or tarpon, bluefish jump to get the upper hand. Bluefish will jump in deep water, but they are particularly prone to multiple jumps and surface thrashing when the water is skinny. Don’t exert too much pressure but absolutely don’t bow to the fish. Bluefish aren’t noble like an Atlantic salmon, nor are they big and powerful like a tarpon. They’re back alley scrappers and should be treated as the junkyard dogs they are. Knowing that a bluefish won’t hesitate is what makes them so fun to catch. 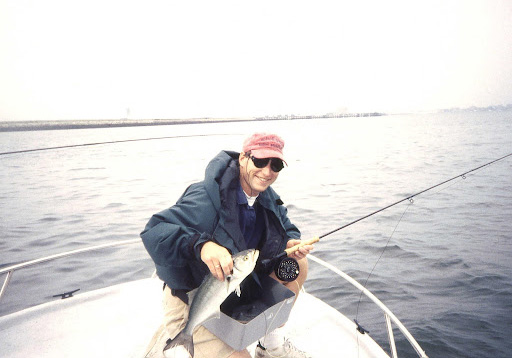 It’s best to land bluefish with either a Bogagrip, a Lipper, or a pair of pliers. Sometimes you’re unprepared. Striper beach fishermen don’t want the weight of a Bogagrip in their kit, but all is not lost if they run into a pack of bluefish.

The way to land a bluefish without the heavy artillery is to first tire him out. When your fish rolls, grab him on the dorsal side above the gill plate, right where the head and body meet. Once your quarry is subdued, a pair of forceps or pliers will enable you to remove the fly easily. Bend down your barbs for easy removal. If you’re wade fishing, beach the fish and use the same method. If you’re going to keep one for the table, make sure to bleed the fish and get him on ice as quickly as possible. Bluefish get soft when they’re out of the water and since they are an oily fish they can taste very strong if they sit un-bled in the sun for a long while. 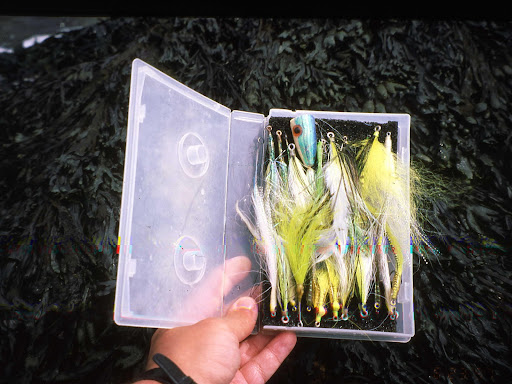 When bluefish are chewing, you might go through one fly per fish.

Flies? Sometimes they can make a difference, but when the bite is hot the blues will eat a rag sock threaded to a hook. Epoxy flies and balsa or hard-foam poppers are popular because they can catch a few fish before they disintegrate. Another way is to combine a fly with a bite guard; simply tie a streamer or bucktail pattern above the bend of a long-shanked hook, tarpon-style. The Eagle Claw 066SS or the Mustad 34011 are perfect hooks. What happens is the blue gets the iron in its teeth and the feathers and hackles are in its mouth. Patterns such as these will also catch striped bass and can be used effectively when bluefish and stripers are mixed in together. These flies also work well when the bluefish are selective and shy away from wire. 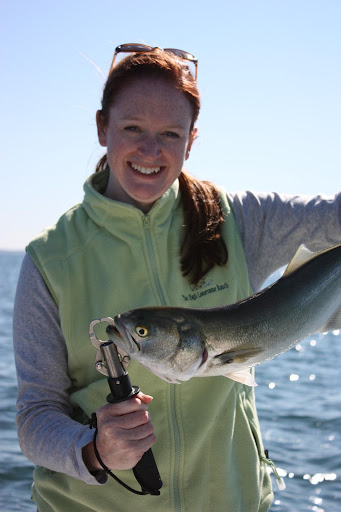 Call ‘em bluefish, blues, bluedogs, yellow eyes, or whatever you want. Just keep your fingers away from their teeth.

Don’t be a snob

It’s bluefish season from the mid-Atlantic through New England. That means there are a lot of species to catch. There are striped bass, school tuna, skipjack, False albacore and bonito. Of course, there are bluefish, so if you get into a blitz have some fun. They’re not just a fish of opportunity to be treated like by-catch. They’re warriors of the highest order and worthy of respect.