The mysterious predator of the ocean. The sound of its name can bring cold chills. Holler those words on a sandy beach and swimmers, sunbathers and others retreat quickly from the water’s edge. Movies about its prowess and appetite have done little if anything to reduce this apex predator from its pedestal. All the above make it an excellent challenge for chasing with the fly rod. 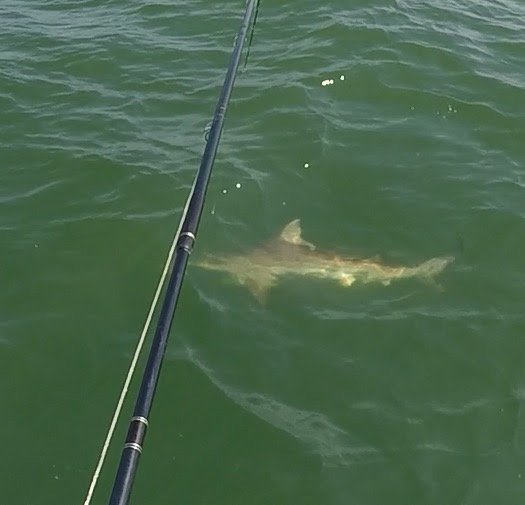 Several years ago, it was decided that this could indeed be a great gamefish on the fly. The predawn was warm and humid as most summer mornings are in Charleston S.C. The sun began to sneak up as we left the landing and headed towards the mouth of Charleston Harbor. The small breeze would morph into high winds after lunch as the sun began to bake down.

Not many boats out this morning, and still probably a little early for most except the die-hards, whose fish adrenaline rush can keep them focused and attentive for days on end.

Daybreak, looking out at the ocean is always mesmerizing to this old guy who has spent more than 46 years chasing trout in mountain settings. It’s a special time, but every day at daybreak going fishing is truly a special time. Because sharks are most active in lowlight conditions such as dusk and dawn, we wanted to be there on time for the action.

For once the Tide and Wind apps were absolutely correct. What a beautiful morning ride. Wave height in the ocean was to be around 1.5 feet every 8 seconds which was perfect. Not getting knocked around the boat first thing made mountain boys getting sea legs easier. 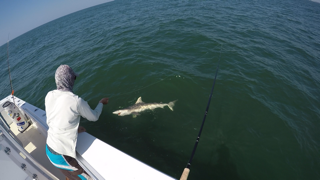 We stopped briefly in a shallow cove and threw the cast net for menhaden. Thankfully the bait gods were gracious to us with a great sacrifice, and we filled the cooler quickly and headed out. Now it was time for the messy part. We took advantage of this riding time and two of us started menhaden duty, cutting the bait in half, and keeping everything in the cooler. We also filled several mesh bags with the slimy, smelly, gutty, mess. Using the onboard water wash, we first sprayed each other down, then cleaned up the boat. It was strictly a matter of priority here.

Anticipation and anxiety were at an all-time high. Thoughts about our potential quarry ran amuck through my mind. Did they pull really that hard and runoff line? Would this 12 wt fly rod really be too much or too little? Was this mass of red and orange marabou feather globs I had tied on 6/0 hooks really going to fool such an intelligent predator? 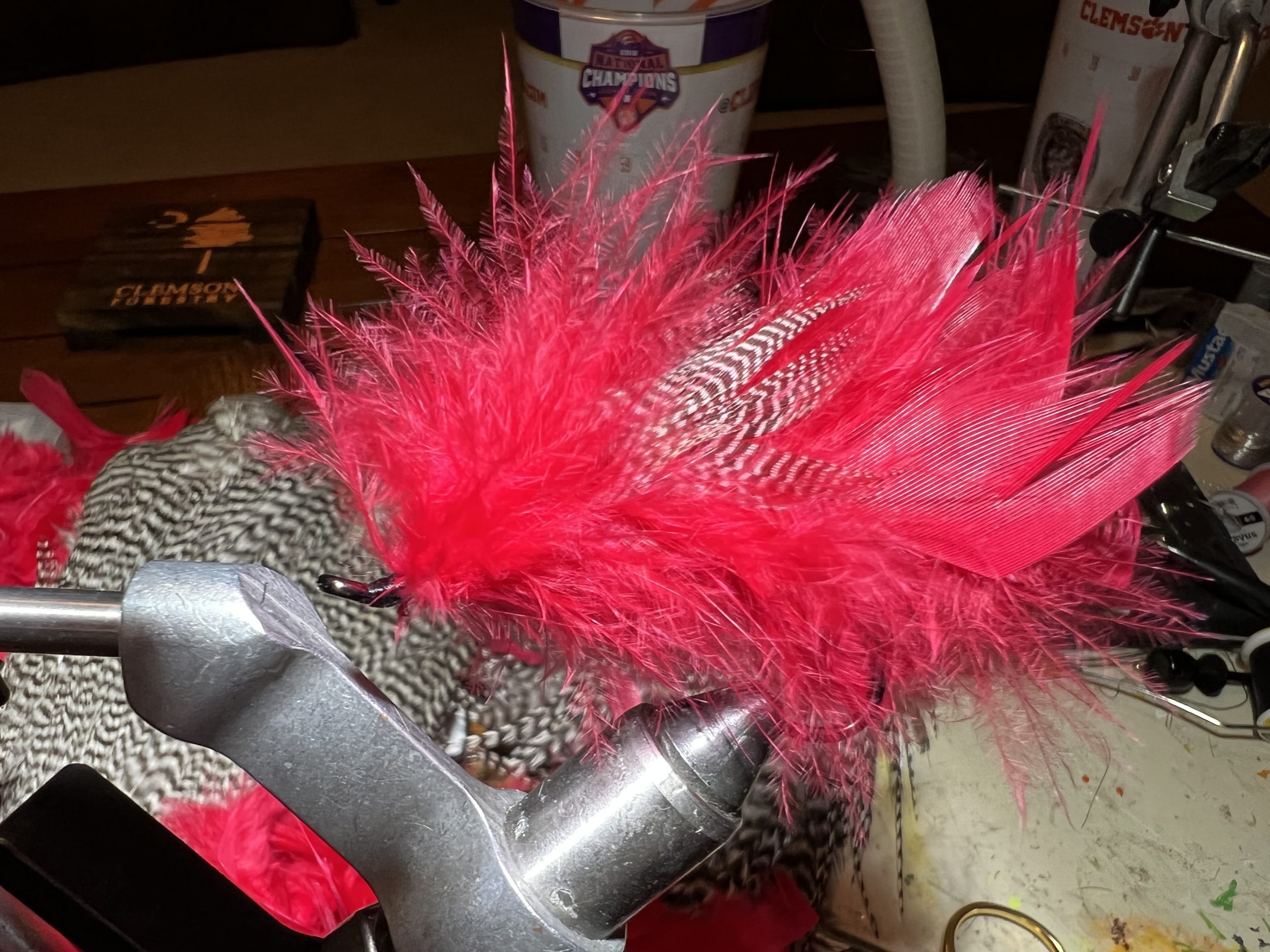 Several shrimp boats were about a mile out, scraping the ocean floor. As we eased closer, the smell of their diesel engines replaced the salty air. We were careful to stay far away from the seining nets dragging behind them. As instructed, I chunked several cups of menhaden parts overboard and tied one of the bait-dripping mesh bags with a parachute cord. The chum line trolled slowly behind us about 20 feet.

Several pairs of dorsal fins quickly broke the water’s surface behind us. Chill bumps popped on my arms immediately and for once I was at a loss for words and could only point my fly rod at them. Sharks everywhere. Besides praying to not let me fall overboard during the fight, I became keenly aware of the adrenaline rush I had wanted and needed. 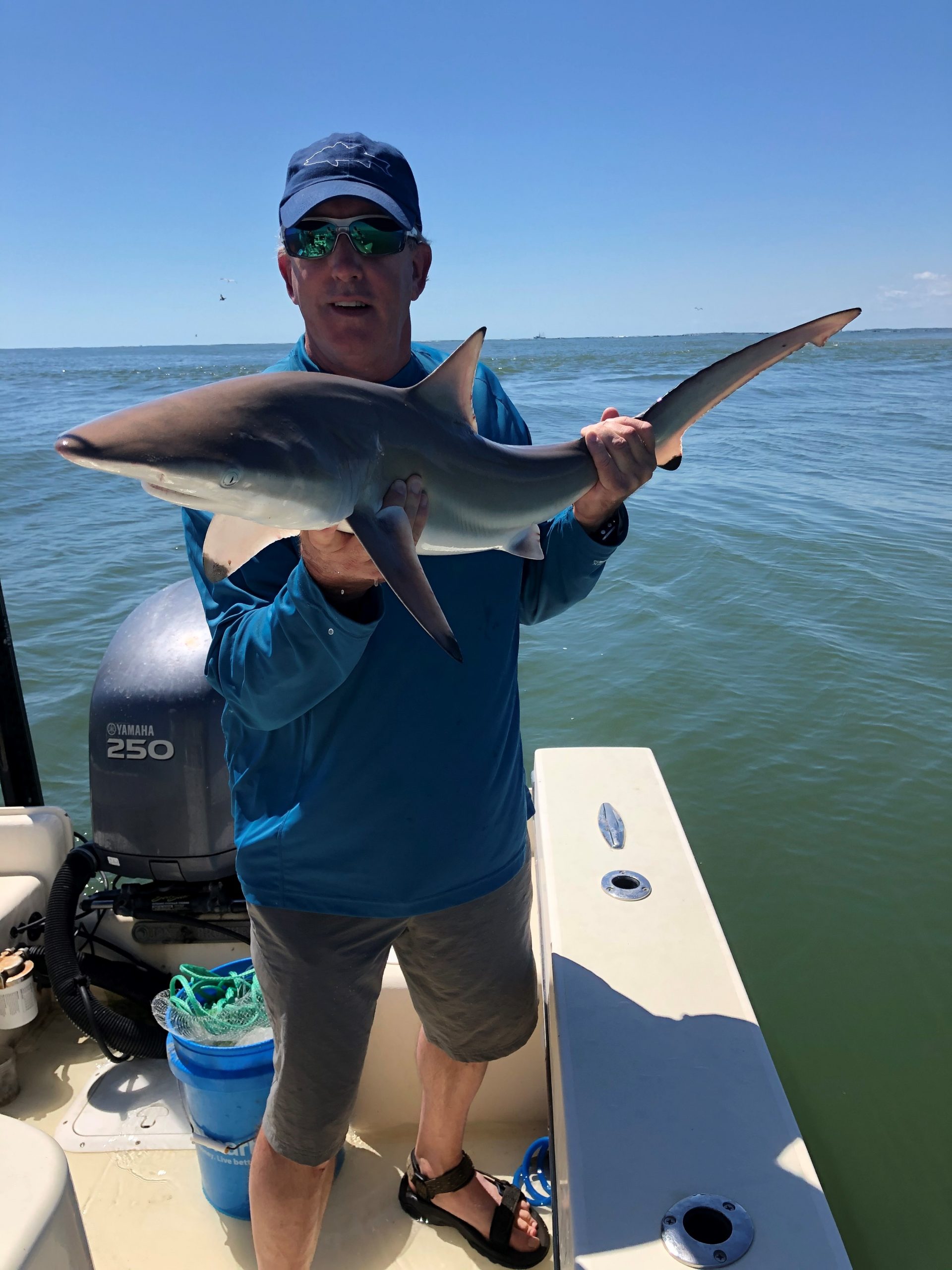 Suddenly, one of the dorsal fins turned and headed straight for the boat and chum bag. Watching reruns of “Jaws” the night before didn’t help the nerves. I readied the rod and as the fish neared, I lobbed the hunk of feathers, trying to land it just in front of the shark’s nose. As it splashed perfectly on the water, the head raised up while a set of teeth, of which there were too many to count, bit down on my fly. A slight pull backward along with the three strong strip sets, and it was on.

I braced my knees against the inside wall of the boat and prepared for the action. The only sound I could hear was the singing of the reel being emptied rather quickly. The captain turned the boat towards the beast as I tried to recover line. The shark jumped and did an aerial 360. My knees became weak watching the action, but I could not move them. They were stiff and felt superglued to the gel coating. Later I discovered that I had pressed so hard that my kneecaps had red “strawberries” across the top of them. The goosebumps never left.

Twenty-five minutes into this match my arms started to ache, and I wished more time had been spent in the gym! As the shark began to tire and I regained line, we finally brought it alongside the boat. My admiration for the fight I just experienced from this sleek, and toothy critter is often thought about. The captain lassoed the tail and we held tight while he very carefully took a long-nosed pair of pliers and dislodged the hook.

Just shy of four feet in length, this first spinner shark with its sense of determination and ability to rapidly test both the angler and the equipment is to be admired. This fast, agile predator with its airborne acrobatics is indeed a true gamefish!

We caught several smaller sharks that morning, all black tips and spinners. All were brought into the boat, unhooked, photographed, and released. But nothing compared to the adrenaline rush of that first one!