Saving wild Atlantic Salmon from Extinction, One Parr at a Time.

Low, gray clouds that spurt rain have different affects on fly rodders. When a low-pressure system rolls down the river and the first drops fall, some anglers make a beeline for pancakes and coffee at the nearest greasy spoon. As the rain falls harder, others make ‘one-last-cast’ after another until they can take no more. Then they’ll sit in their trucks and wait out the downfall. When the rain stops they go back to the river for more. The hardiest of them all simply pull rain gear from the back pocket in their vests and keep fishing. The funny thing is that latter group might have done a rain dance in the first place. If they’re Atlantic salmon anglers they’ll be laughing like a hyena as they know the best fishing is about to come. 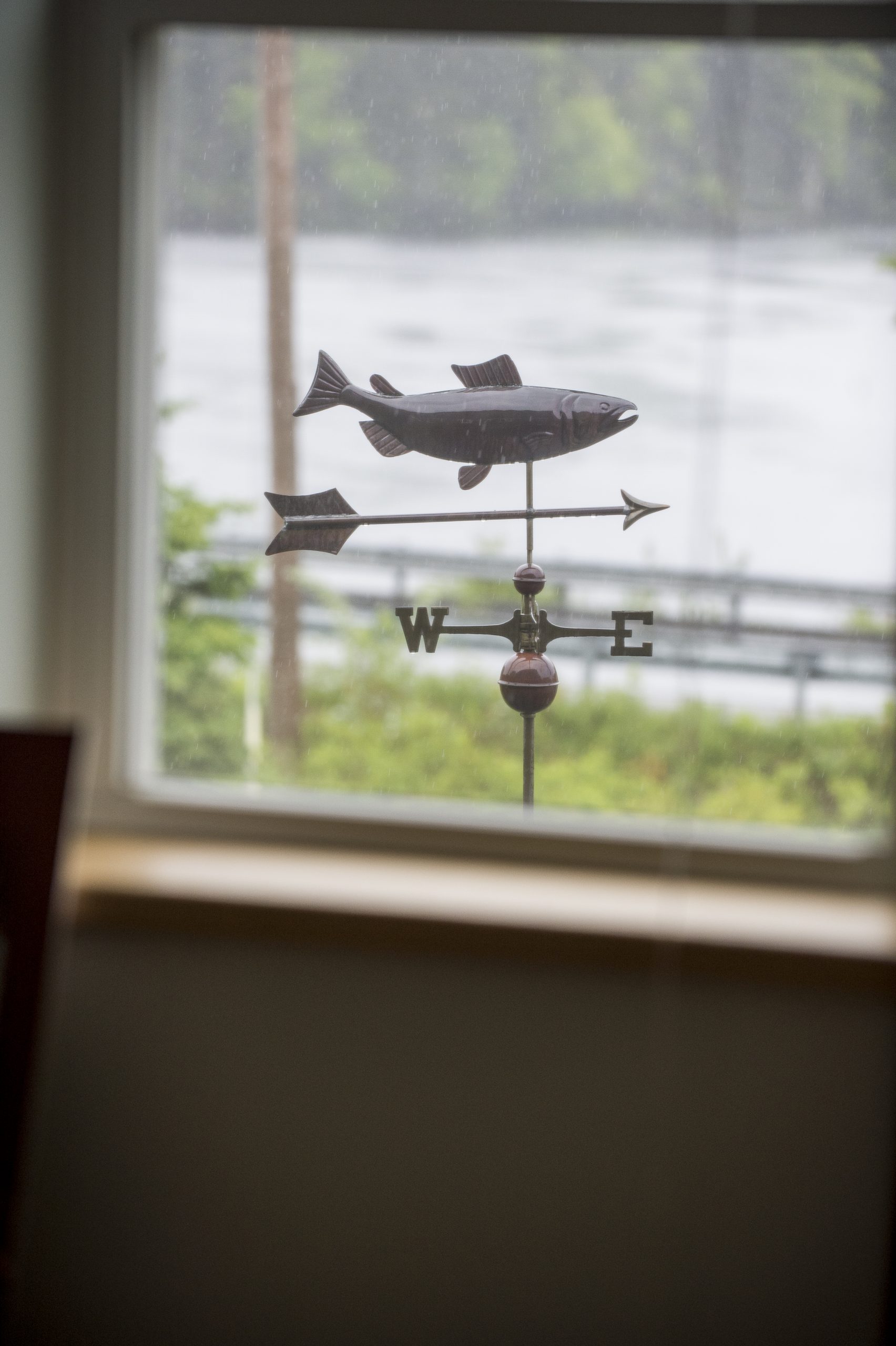 Steady rain brings cooler temperatures and richly-oxygenated water to a salmon river and a rise in levels that lights everything up. The higher, faster water enables fish returning from the sea to leave low-water pools and move upriver to spawn. Atlantic salmon can snake their way through boney riffles until they hold in the quiet water. Some are positioned behind boulders, others in lies, and when more rain falls they’ll continue upstream again.

Atlantic salmon are unlike Pacific salmon in that they don’t die following a spawn. Instead, their fertilized eggs laid in a redd grow to become alevin. In time they grow more and become parr. When large enough, parr undergo a metamorphosis called smoltification. During that phase these fish born in the sweetwater become tolerant of the salt and drop out of the rivers to begin their life at sea. Smolt mature into Atlantic salmon and complete a 3,000-mile swim from coastal New England to the west coast of Greenland. After one, two or even three years in the brine they return to spawn in the rivers in which they were born.

Their homecoming is a joyous occasion for everyone! Camp owners welcome fishermen from away while local fly rodders cast and mend. Guides coach anglers through backing-burning runs and leaping jumps. Many towns folk line riverbanks thereby turning Atlantic salmon fishing into somewhat of a quiet spectator sport. Buzz of fish caught and lost are the talk over coffee at a bakery just as they are rehashed over a glass of bourbon or Scotch. The Atlantic salmon’s life is an odyssey of epic proportion and is one that has intrigued and inspired anglers, biologists, and conservationists for many, many years. Epic is a fitting description of their lifestyle indeed. 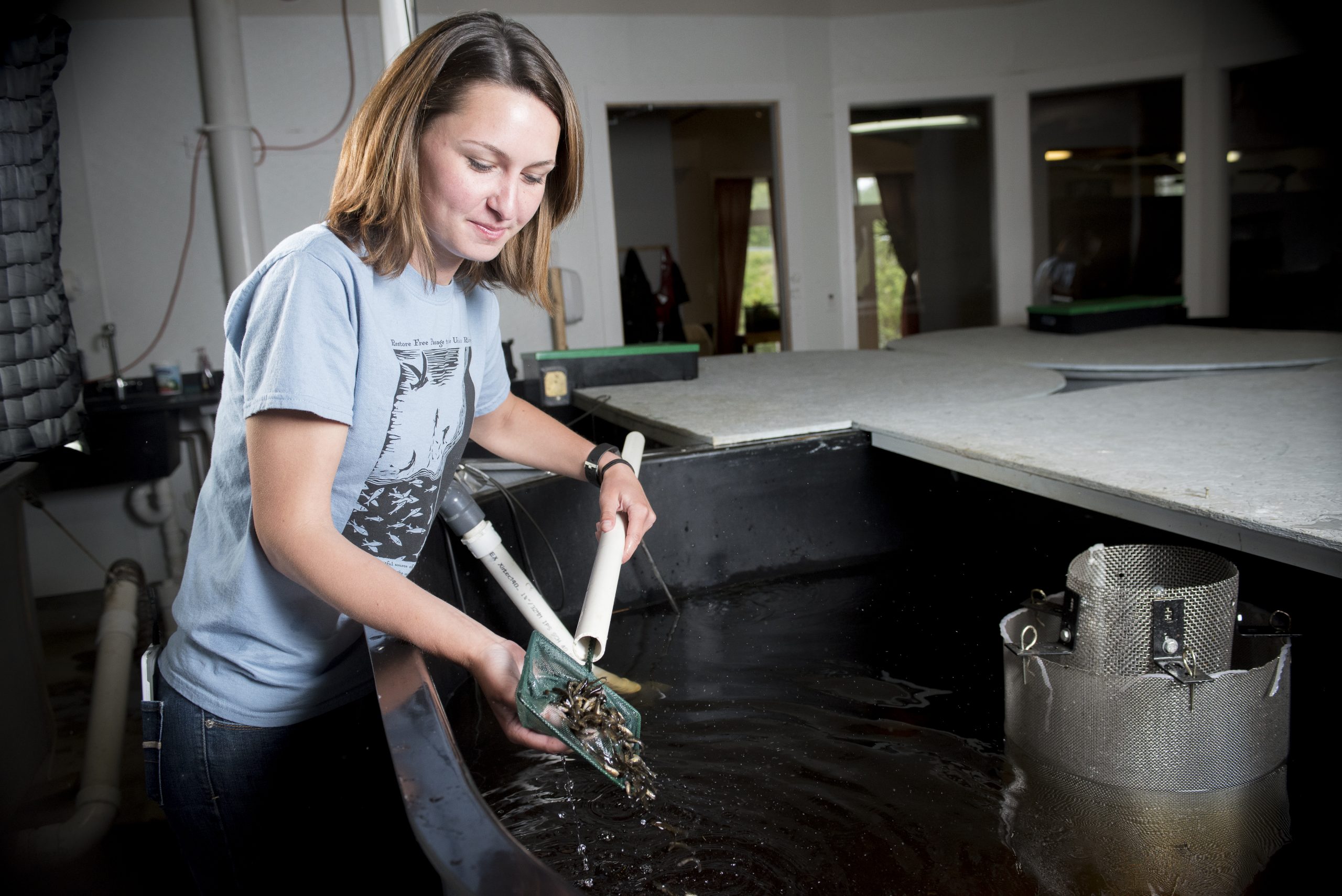 The Peter Gray Parr Project’s Rachel Gorich examines parr that are swimming into the current in dark tanks. The parr are becoming ‘little athletes’ according to Peter Gray’s principals.

Some of their ranks were depleted due to overfishing. A century ago, and before refrigeration, Atlantic salmon were so American that they were the standard 4th of July meal. Over 300,000 Atlantic salmon arrived in New England rivers in the summer and were easy to net. And they traditionally were served with peas, because peas were the vegetable that was ripe enough to harvest in late June and early July. Fresh salmon for Independence Day no more, for the combination of over-harvesting, dam construction, and the silting and polluting of rivers reduced domestic Atlantic salmon numbers to an all-time low. In conjunction with their diminished population, we now slum it with hamburgers and hotdogs for our July 4th picnics.

History is lost as well. No longer is the first Atlantic salmon caught in the Penobscot River in Maine sent to the President of the United States. That tradition ceased 25 years ago when the fish was classified as endangered. The last President to receive a Maine-caught Atlantic salmon was George H.W. Bush in 1992. Combine it with the fact that most Atlantic salmon restoration programs were shuttered due to a lack of success, and our native fish seems doomed. 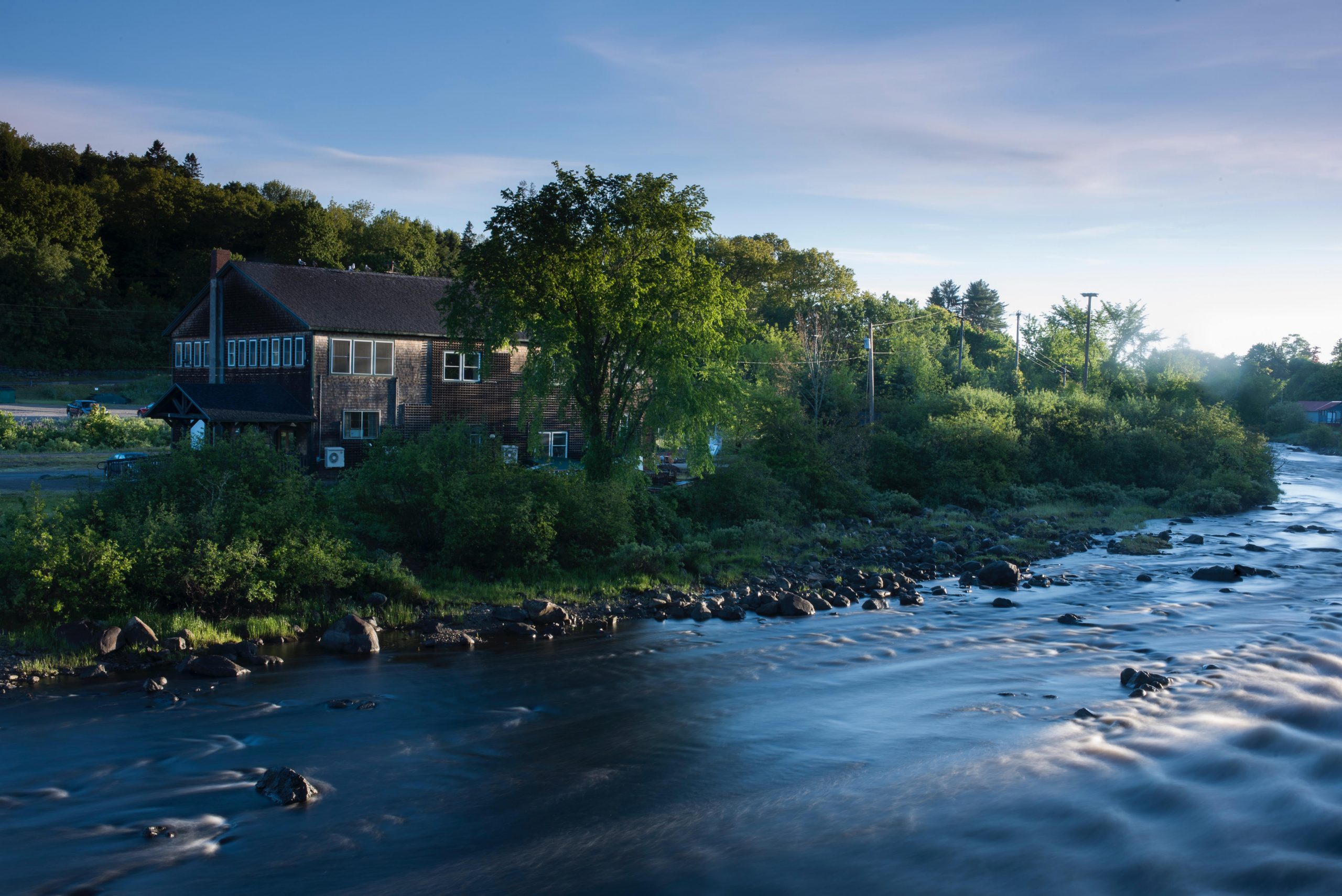 Peter Gray built his unique streamside hatchery on the River Tyne so that parr could be raised in water identical to that to which they would return. The Peter Gray Parr Project uses the same model, with their headquarters being located on the banks of the East Machias River.

Some would be content to allow the wild American Atlantic salmon to become extinct like the Heath Hen. But not the Downeast Salmon Federation (DSF), for in 2012 the East Machias, Maine organization took a bold step. DSF launched the Peter Gray Parr Project that is based on the scientifically-proven and successful methods that their namesake Peter Gray used to restore Atlantic salmon on the River Tyne in England.

Gray spent 27-years managing the famous Kielder Hatchery, and in his tenure, he developed a unique and successful way to raise salmon as salmon. First, Gray located his hatchery adjacent to the river where salmon spawn. Next, he diverted river water from the Tyne to flow into the hatchery so the fish are reared in water identical to that in which they will live. Then, he created the substrate box that closely replicates a wild salmon redd for egg maturation. He painted rearing tanks black so as to darken the parr and condition the small fish to low light conditions. When parr are released into the wild they are naturally wary.

Finally, as the fish develop, he increased tank water flows to turn them into ‘little athletes’ capable of life in the wild. The strong fish were stocked in the fall when the water temperatures were cold; their metabolic rates lowered so they did not look to feed thereby avoiding capture by a cormorant or a heron looking for a meal.

Gray’s efforts ran counter-current to domestic programs, most all of which are now shuttered. United States Atlantic salmon programs raised their salmon like trout. They were reared in inland hatcheries with a limited number of broodstock. No conditioning was done, the fish lived in water different from their natural environment, and they were stocked in the spring. Some fish died shortly after stocking while others became meals for predatory fish and birds.

Peter Gray’s success is hailed as one of the most impressive wild Atlantic salmon restoration programs in the 170-year history of Atlantic salmon conservation. His results were staggering as annual salmon returns increased on the River Tyne from 724 to nearly 10,000 adults. A recreational fishery for these wonderful gamefish has now been open for years.

For the past nine years, the Downeast Salmon Federation has been building towards success. Big news came from the Spring 2020 smolt trapping. Consistent spring rains brought East Machias River to optimal water levels. The smolt trapping operation yielded 220 smolt that were departing the river for the sea. The 220-captured fish reveals a three-year trend of the highest number of exiting smolt, the best trend line from any river in the past decade. 20 smolt were wild or had been stocked by DSF as unmarked fry from their Peter Gray incubators while 200 were stocked as parr by the Downeast Salmon Federation. As not every smolt is caught, the estimated total number of departing fish marks the second highest number since the program began. The next few years are of critical importance, particularly because returning adults will begin to arrive. 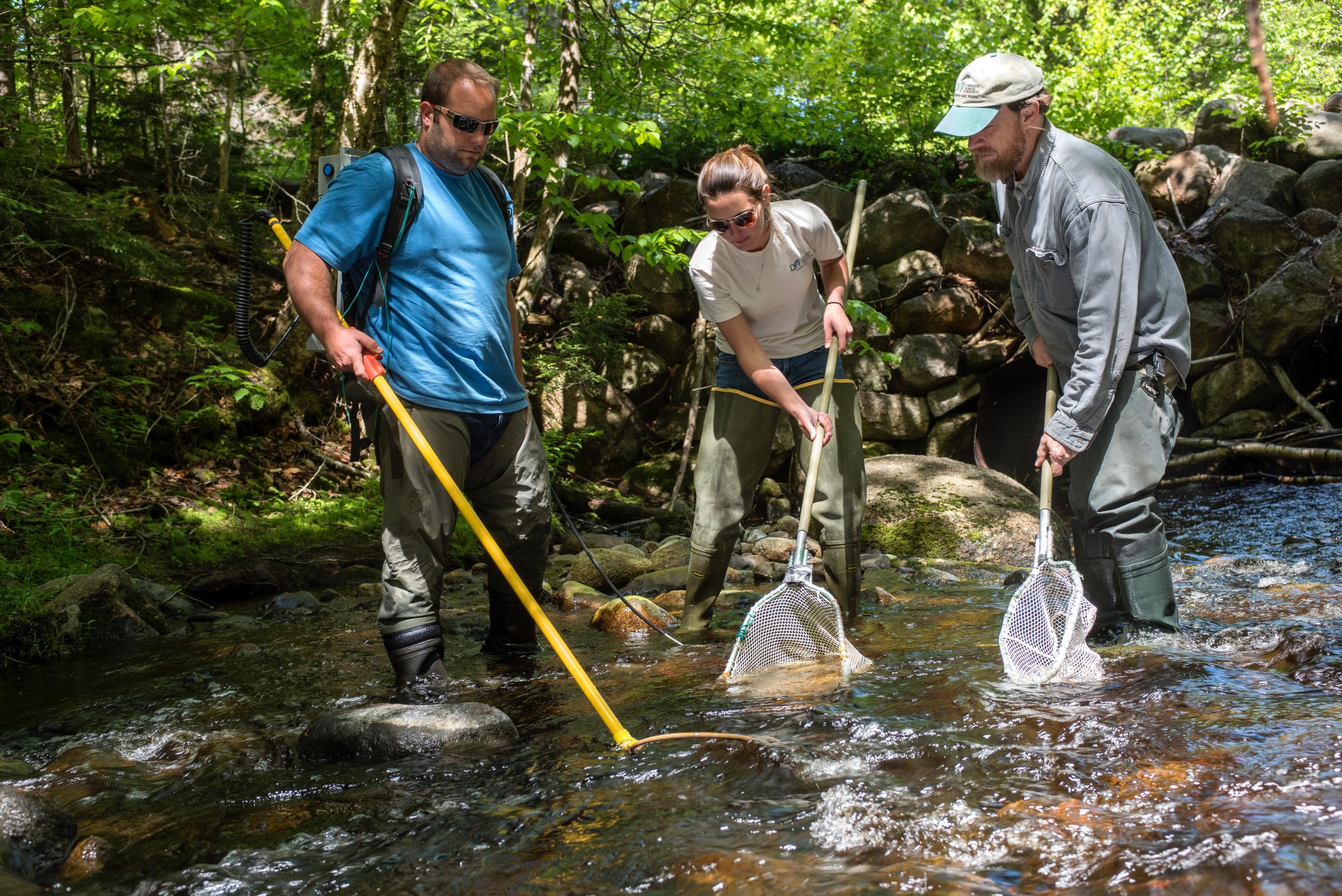 Zach Sheller, Rachel Gorich, and Dwayne Shaw (left to right) monitor all parts of the parr’s development. From stocking to counting redds to electroshocking, they are the stewards of the program which is reporting significant success.

But in 2021, Dwayne Shaw, the founding CEO and now Executive Director of the Downeast Salmon Federation reported additional great news that shows the Peter Gray Parr Project is working. “One of our most important metrics is the number of redds in the river,” he said. “Those redds are the nesting areas made by returning fish and are the first step of the breeding process. In a review over the past six years, or from 2016 through 2021, we have seen a minimum of four redds to a maximum of 60 redds. To put it in perspective, that is the highest number of returning Atlantic salmon documented since the 1970’s. In effect we have reversed a 50-year decline.”

Delisting a species from the Endangered Species List is a numbers game. The more eggs secured results in more parr raised and stocked and more smolt that head to sea. Atlantic salmon return over a three-year period thereby making the upcoming decade one of intense activity and study wrapped in a veil of hope.

Financial support of the Peter Gray Parr Project is focused on increasing parr production to about 400,000 per year for the next 5 years, towards the improvement of tributary watersheds critical to stocking success, and many other DSF habitat management and protection projects. Fortunately for the Peter Gray Parr Project there is support from many concerned anglers and several companies. Fly rod manufacturer Thomas & Thomas, now celebrating their 50th Anniversary, is a tremendous supporter. Says T&T’s John Carpenter, “Few fish have the iconic presence in fly fishing that the Atlantic salmon enjoys, yet the challenges faced by the species are also unique – and enormous. Thomas & Thomas is thrilled to support the conservation efforts of the Peter Gray Parr Project, with the goal of creating or expanding self-sustaining runs of wild salmon for generations to come. Together, we hope to ensure that our children and grandchildren have the opportunity to live in a world with these magnificent fish.”

“Since our founding of the project in 2012, many biologists and agencies have looked at the Peter Gray Parr Project with skepticism,” Shaw said. “They weren’t sold on the process or the viability of the project. But since we had 80 redds, many state and Federal agencies are rethinking our work. The National Oceanic and Atmospheric Association (NOAA), The United States Fish and Wildlife Service (USFWS), and the Maine Department of Marine Resources are working with us to increase our capacities. We’re working to create higher-quality habitat as well as begin work on other area rivers. What once was viewed as experimental now shows scientifically verifiable results. We couldn’t be more excited about the renewed interest in saving Atlantic salmon.”

You can have an impact for one buck. While the ultimate goal of the Downeast Salmon Federation’s Peter Gray Parr Project is to return Atlantic salmon populations to healthy numbers, the secondary benefit is that, once achieved, rivers can be reopened for recreational fishing. To raise and stock a single parr costs only a dollar. That’s the cost of a quarter of a gallon of gas. The difference is you’ll help wild Atlantic salmon go a lot farther than you will.

To learn more about the Peter Gray Parr Project or to make a donation visit www.wildatlanticsalmon.org. Wild Atlantic salmon can use your help, especially because such encouraging progress is being made. One day maybe you or your kids will hook one of these glorious fish. And then, you’ll see what all the commotion is about.