Rivers and the Great Trout

“Granddad always said the best things about fishing were beyond the senses. He said the mountains, rivers and fish were the center of why you were there, but not the heart, that the heart was in those pure moments in and around the fishing, ………. That’s what hooked your soul.” ― J.C. Bonnell, Burnt Tree Fork 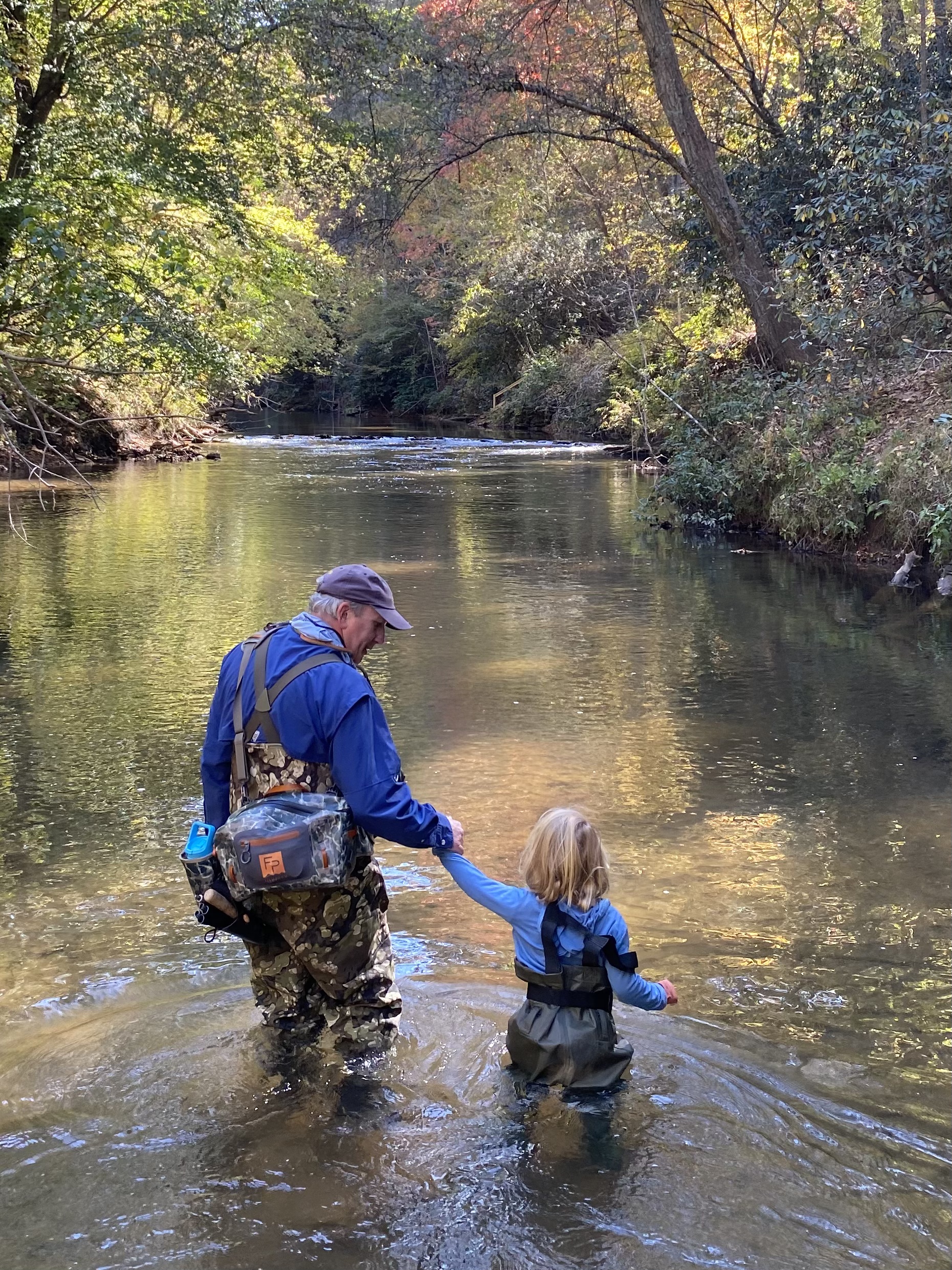 The name Papa, sometimes called Grandpa or Grandad, comes with a rather large obligation. This responsibility includes spoiling the child, sharing great stories of which only tiny parts of it may be true, being able to communicate family history, and explaining the way life used to be when you were a boy. At the same time, this obligation allows Papa the opportunity to look at nature and its intrinsic gifts once again through the eyes of a child.

I embraced this job description and began fulfilling it several years ago. I started by taking my grandson, Rivers, fishing, always making it less about the fish and more about our time together. And while I am never too old to go drown worms with my grandson in a farm pond, I always have a fly rod within arm’s reach.

The rivers and streams throughout the Southern Appalachian Mountains had been extremely low this year due to drought conditions. But fall was in the air, and cooler night temperatures meant cooler water and more active and feeding trout. Low water also meant easier wading for my 5-year-old grandson, so off we went. Low water conditions may prove to be an asset when your “little buddy” is only 41 inches tall. 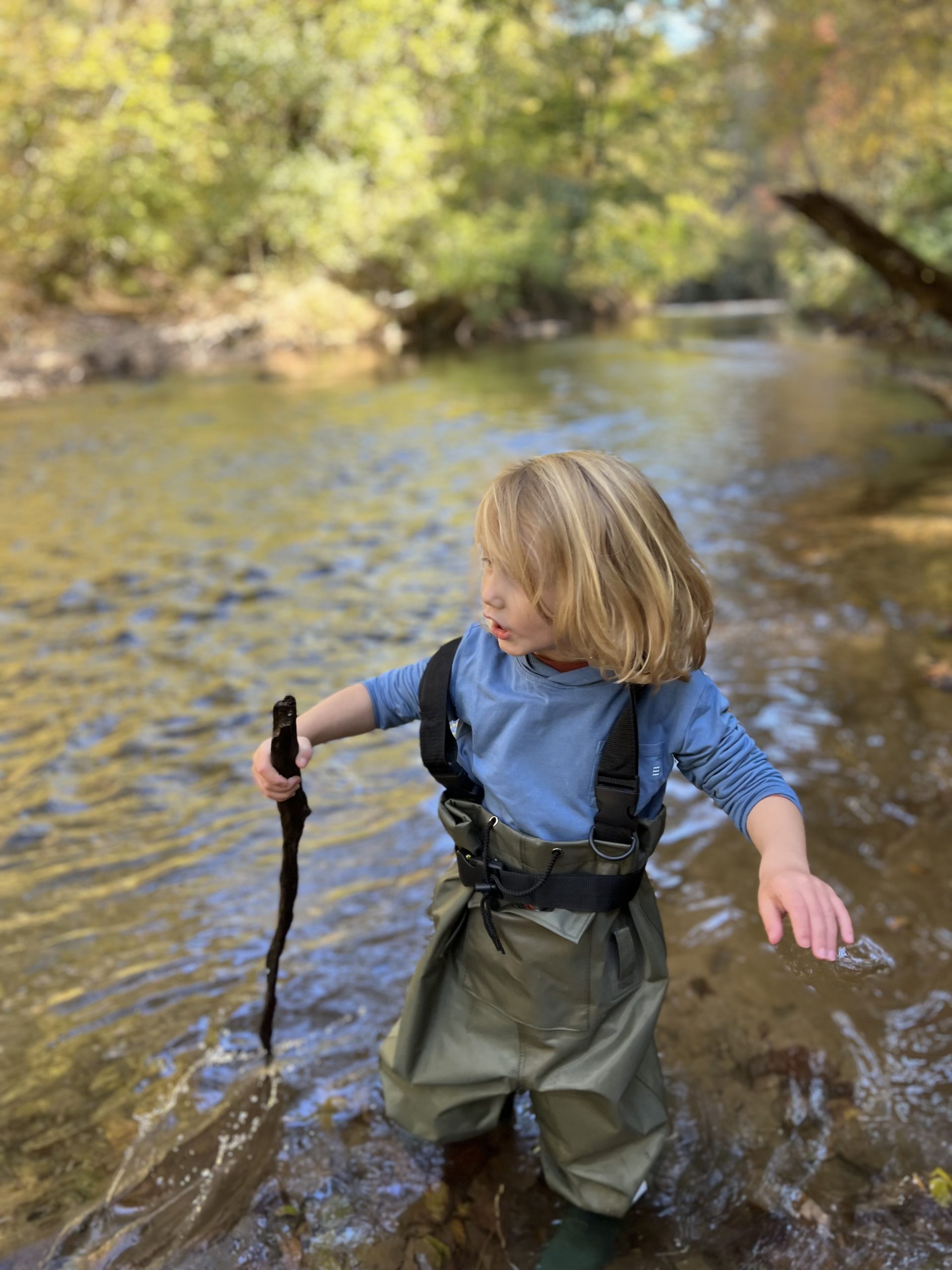 The fishing expectations of my little buddy seemed to multiply the closer we got to the river. This included asking all the questions that could cross the mind of a five-year-old that, while simple to me, were of the utmost importance to him.

He had been fishing with me many times before, but each new occasion was like the first time he’s ever been. The many questions revealed the excitable anticipation bottled up inside him, which reminded me of myself. I never get tired of wading mountain streams and hope I never do. I was glad to have my little buddy sharing the river with me.

Football and hunting season always reduce the number of fall fly fishermen on the river, which is all right with me. Today we would have the river to ourselves, accompanied by a close friend to help watch out for my little grandson. 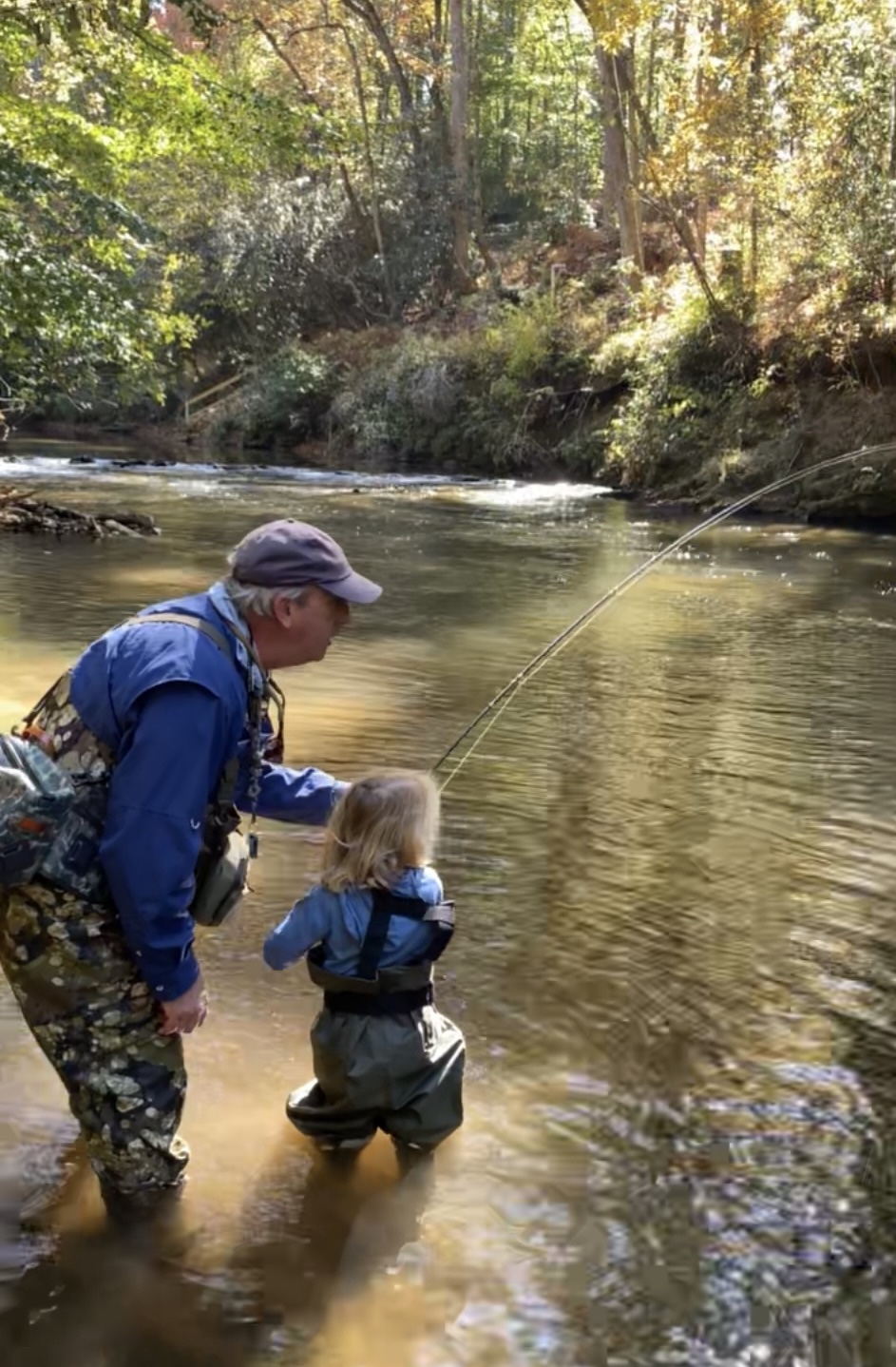 Together, Rivers and I had tied flies for our outing the night before. After completing each fly, he asked that I cut the hooks off so he wouldn’t hurt himself when grabbing them from his pocket. I explained the hook part was what held the fish on the fly, and he could keep these flies to show his friends in kindergarten. We would fish with my flies and be extra careful. He understood, I think.

The creative imagination a child has is astounding. We began discussing why one needs waders instead of just getting wet, even though they may be a bit uncomfortable. The water is cold, which he soon discovered. He compared the protection of waders to the cloaks and suits of his superheroes – “Iron Man” had protection from bad guys thanks to his “waders of armor.”

“Even the Ghost Busters team wear white, protective clothing to protect them from the ‘slimers and goo,’” I said, continuing to relate to his hero friends.

“I understand, Papa, we need protection to fish here,” he acknowledged, while in the same breath, he added, “And can we watch the new Ghost Busters movie again tonight, right?”

I knew where we could enter the river in a very shallow stretch and explained there was a rope lying down on the bank with knots to help us hang on. We could pick it up and use it as a handrail while walking backward down the steep bank. This seemed exciting until he saw it, looked down the riverbank, and then climbed on my shoulders as I backed my way to the river. 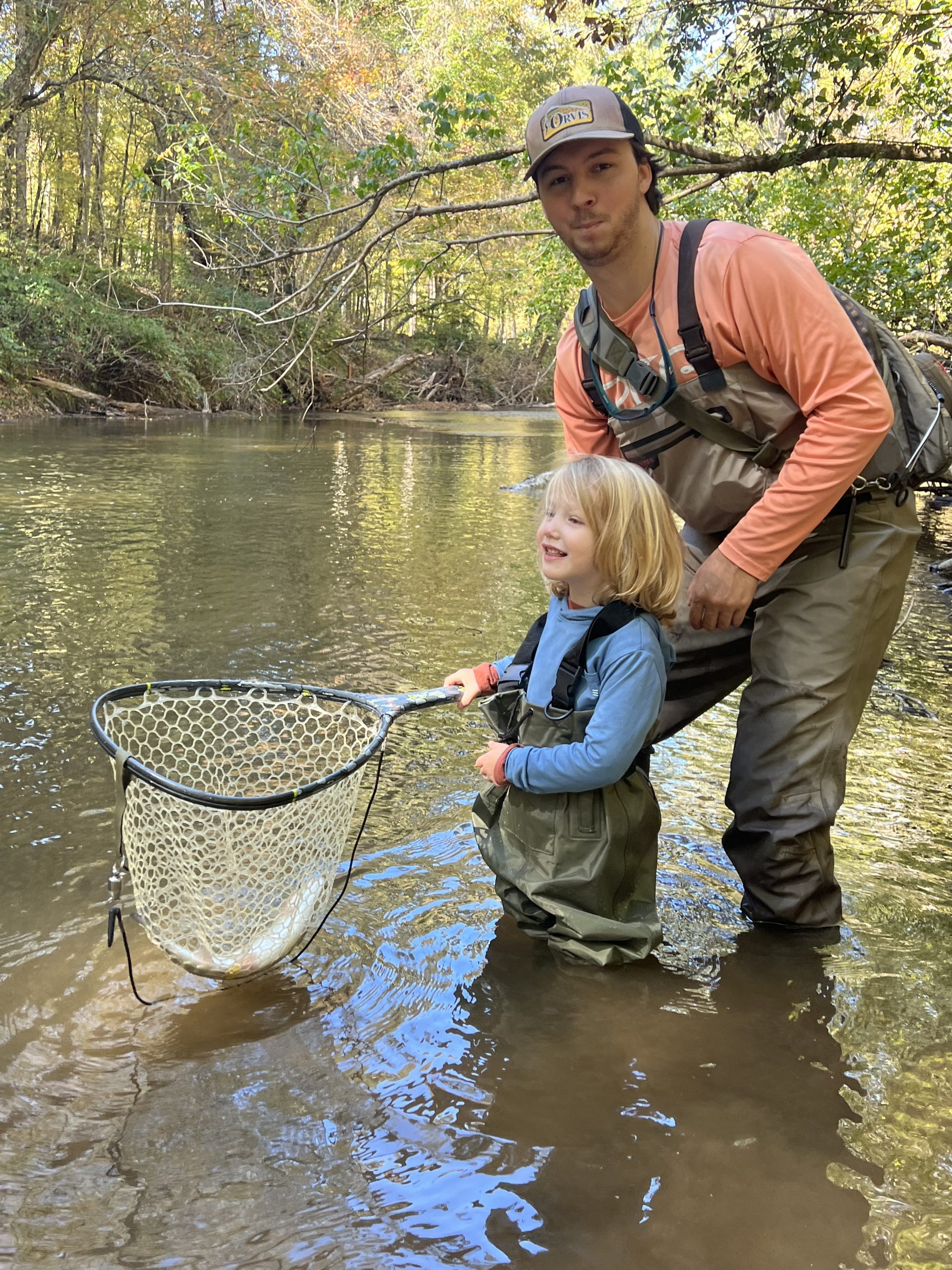 After ankle-deep water covered both our sets of wading shoes, he talked to me about how dry he was and how cool the waders really were. The protection was working. Then he stuck his arm down into the water about shoulder length and picked up a rock and threw it. So much for having a dry day!

He never complained about being wet. Eventually, both arms were scooping up rocks when not fishing, and the two of us practiced throwing like baseball pitchers.

I had to be careful when wading with him in clear water. He felt confident if he could see the bottom, and confidence usually breeds overconfidence and a river bath. After a couple nice “pullbacks” on his wader straps, he automatically started walking right beside me as we maneuvered through the translucent river.

We discussed the importance of wading quietly as we watched a heron moving gently but deliberately along the riverbank in front of us. We talked about the stalking heron and how we need to be like him as we move, looking for good runs and pocket water to fish.

I whispered and told him that fish could hear us, so we needed to walk without splashing. He knew fish didn’t have ears, so a simplified discussion took place about how fish hear through vibrations.

He saw my wading staff and decided he needed one as well. We began a search to find the perfect beaver stick his size. As adults, we take for granted the value of a walking staff or cane, but this little guy didn’t understand. Once I explained how to put the stick down and use it for balance, both in the river and up the mountain, he and his stick became inseparable. He used it all day, never lost it, and brought it home to be used on the next adventure. 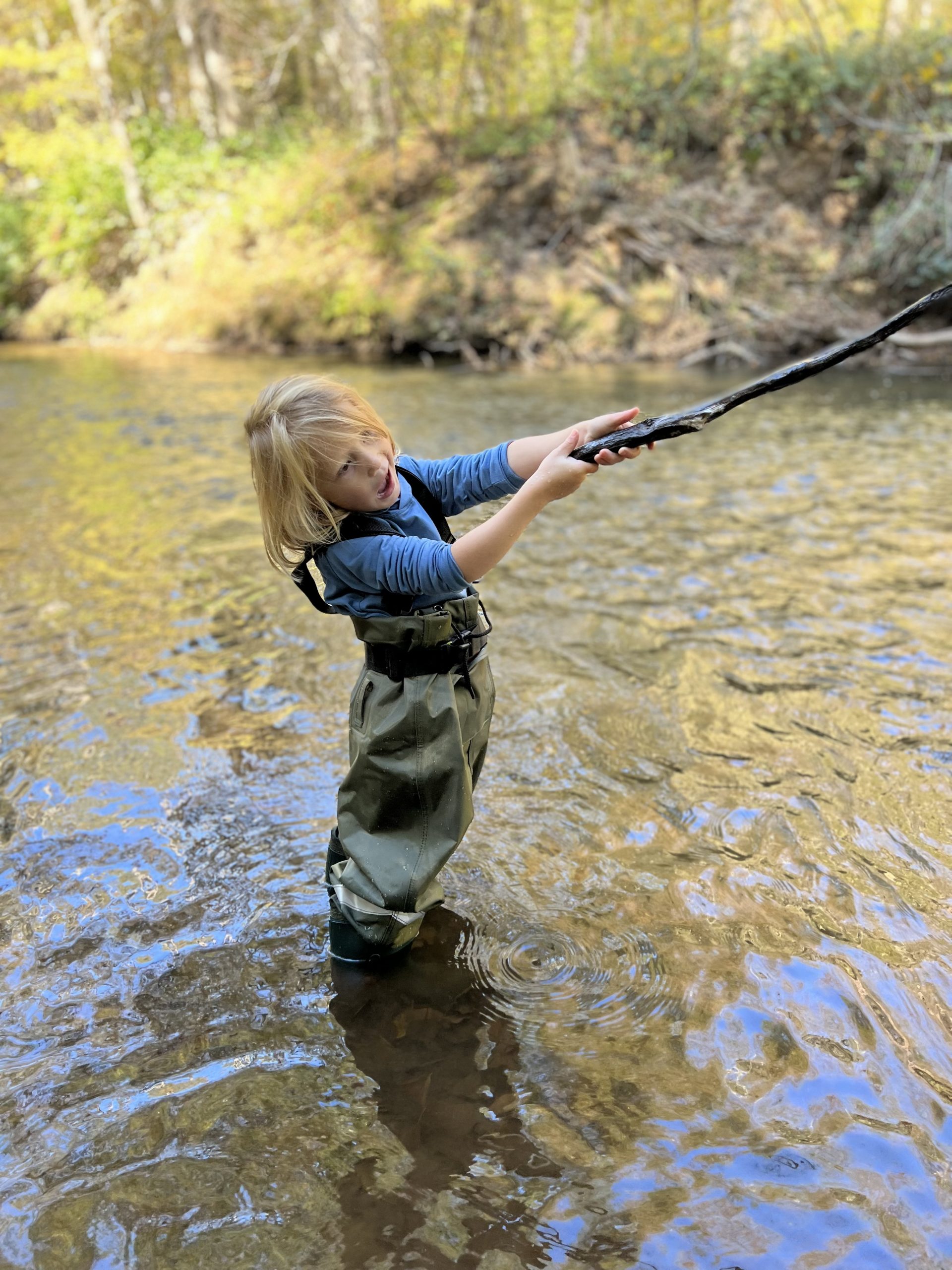 A touch of independence surfaced at first as he struggled to roll cast like we had practiced at home. So, I offered to cast for him, not to mention it would keep the amount of tangled tippet to a minimum. I explained how the river splits around rocks and the current causes foam lines, which is where we would cast and look for trout.

I had tied on a lightly weighted wooly bugger in size 16. On the second drift through the run, the trout hit the fly and I lifted up the rod and handed it to him. Today, after three lost fish and a little coaxing, he finally realized he needed to be gentler and keep the fly rod tip up.

His competitive nature perked up and from the fourth fish on, he played each one into the net by himself, listening intently to my coaching as the fish dashed and splashed and tried to pull the rod tip down and him with it.

The trip was not only about catching fish. I held his hand while he balanced himself walking across logs and fallen timber. We practiced our rock-throwing skills and made big splashes when not fishing. But it was the stick boat racing that he seemed to love most. We learned how the river’s currents and eddies flowed by watching our stick boats of different sizes float along the fast and slow currents. 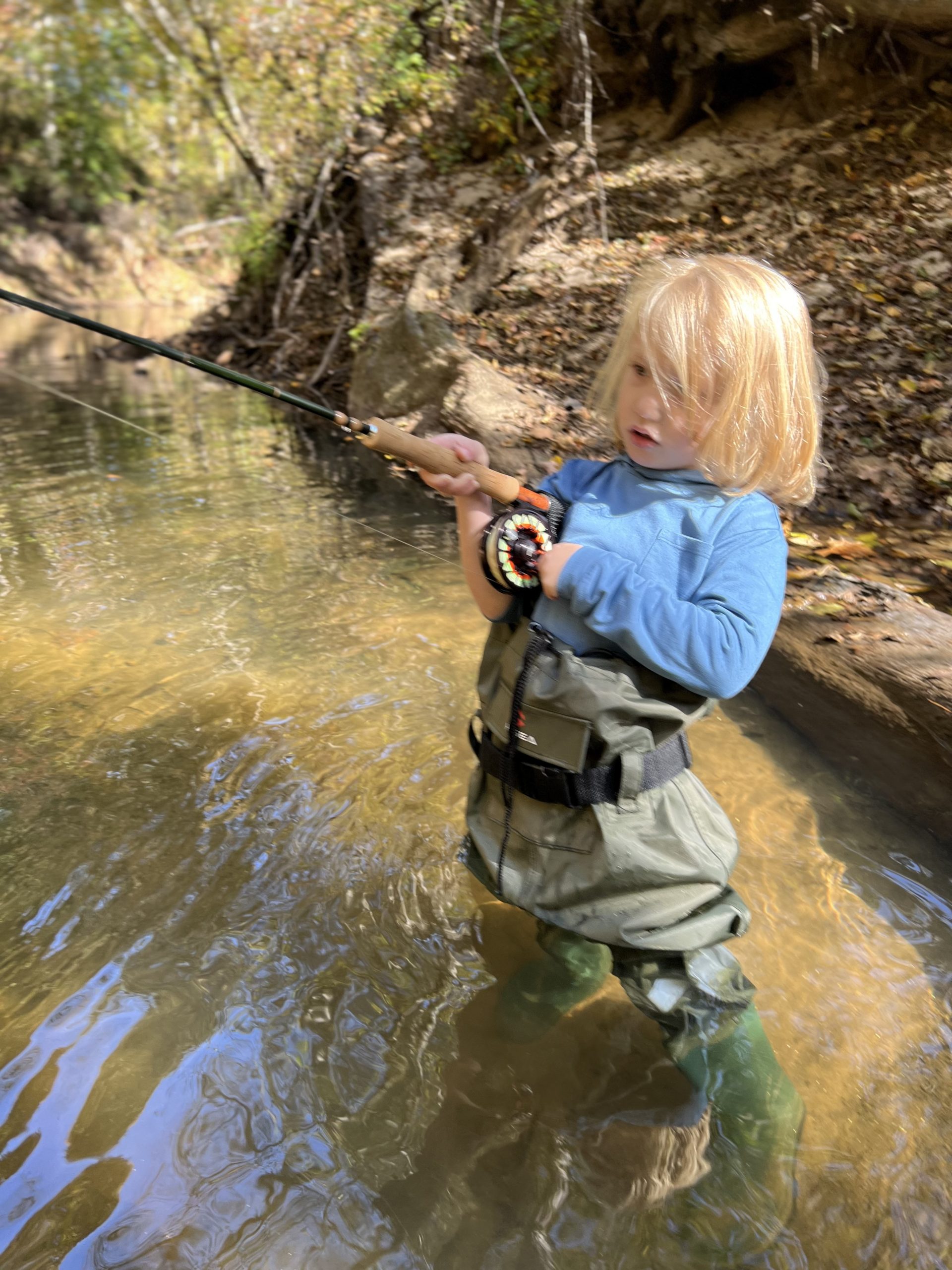 We kicked leaves along the mountain trail, stumbled over small stickup roots, and approached our last fishing spot as the sun began to dip behind mountains. As we neared the last set of small rapids, the river made a hard left and then straightened up and filtered over a small dam of stones.

Climbing down the bank was easy and we positioned ourselves along the river edge where I could cast back into the foam line. After several casts, my grandson told me it was time to change flies because this one may be tired, and we needed a fresh one. I made one more cast with the “tired” fly and a hook-up! I handed him the rod, not knowing what I had hooked, only that the rod tip bent almost halfway down to the handle.

He stood stoically with laser focus as this fished peeled line off the single action fly reel. His hands were placed perfectly on the cork, gripping so intently that I could see his neck muscles tighten up. Such determination. The previous fish were just practice compared to this one.

I never touched the rod to assist, but chose instead to coach from beside him. And he listened. 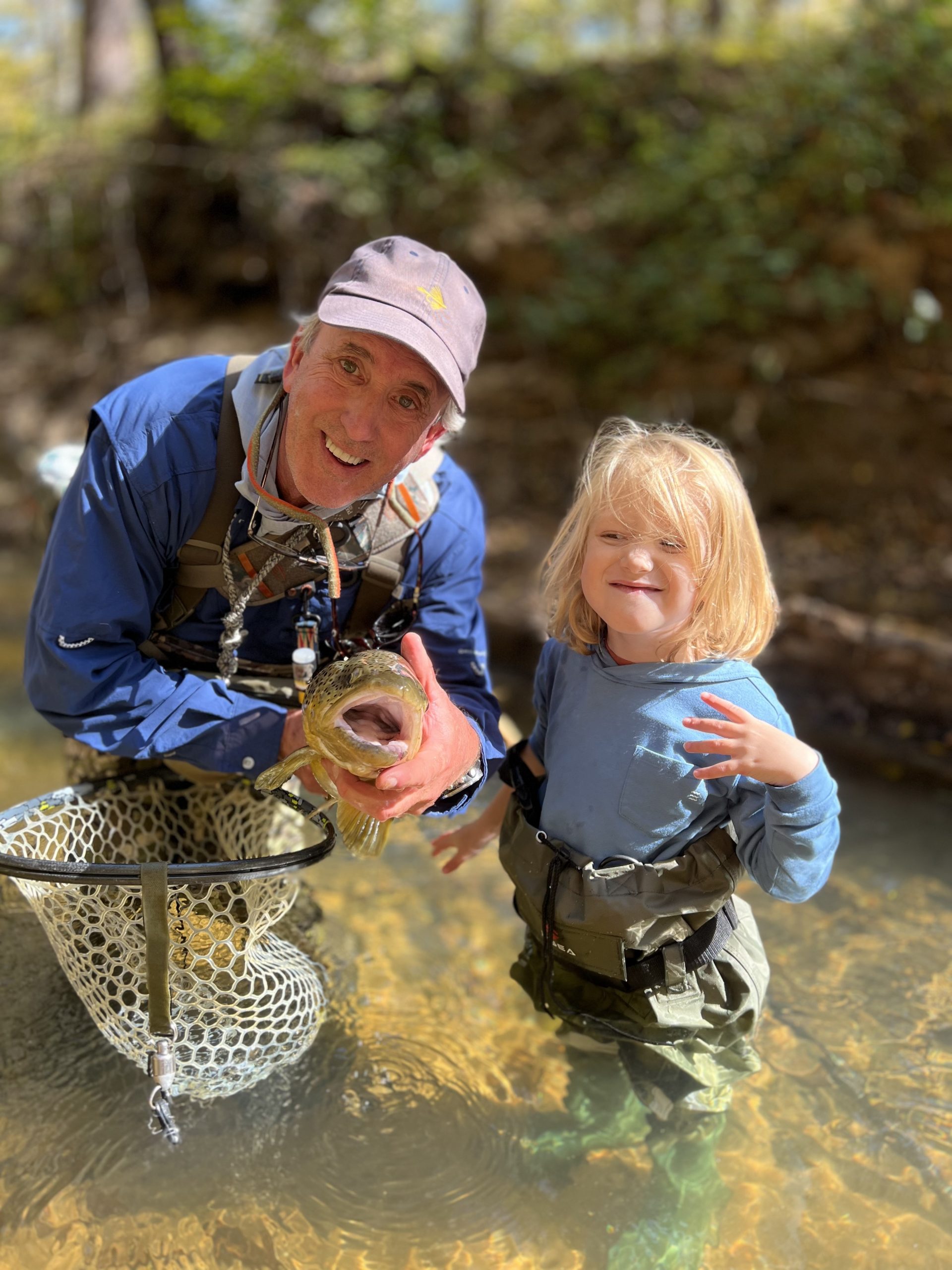 The fish dove into the pool above and attempted to entrench itself underneath the bank, but his subtle rod pressure was enough to divert the fish.

Instead, it broke water and thrashed from one side of the river to the other, trying to dislodge the small fly. The trout never followed the current downstream, which could have been a disaster. Finally, after six minutes of battle, the combat was almost over. The trout rode the gentle side of the current and was netted quickly.

Pictures were taken, but the excitement of a five-year-old landing a fish over half his size by himself on a fly rod for that duration and never wavering is a memory we both will never forget. The smiles, fist pumps, high fives, and water stomping are priceless. He was proud and I was proud of him. Papa was a spectator during the battle of this great, beautiful brown trout. This time, it was truly all about the fish!