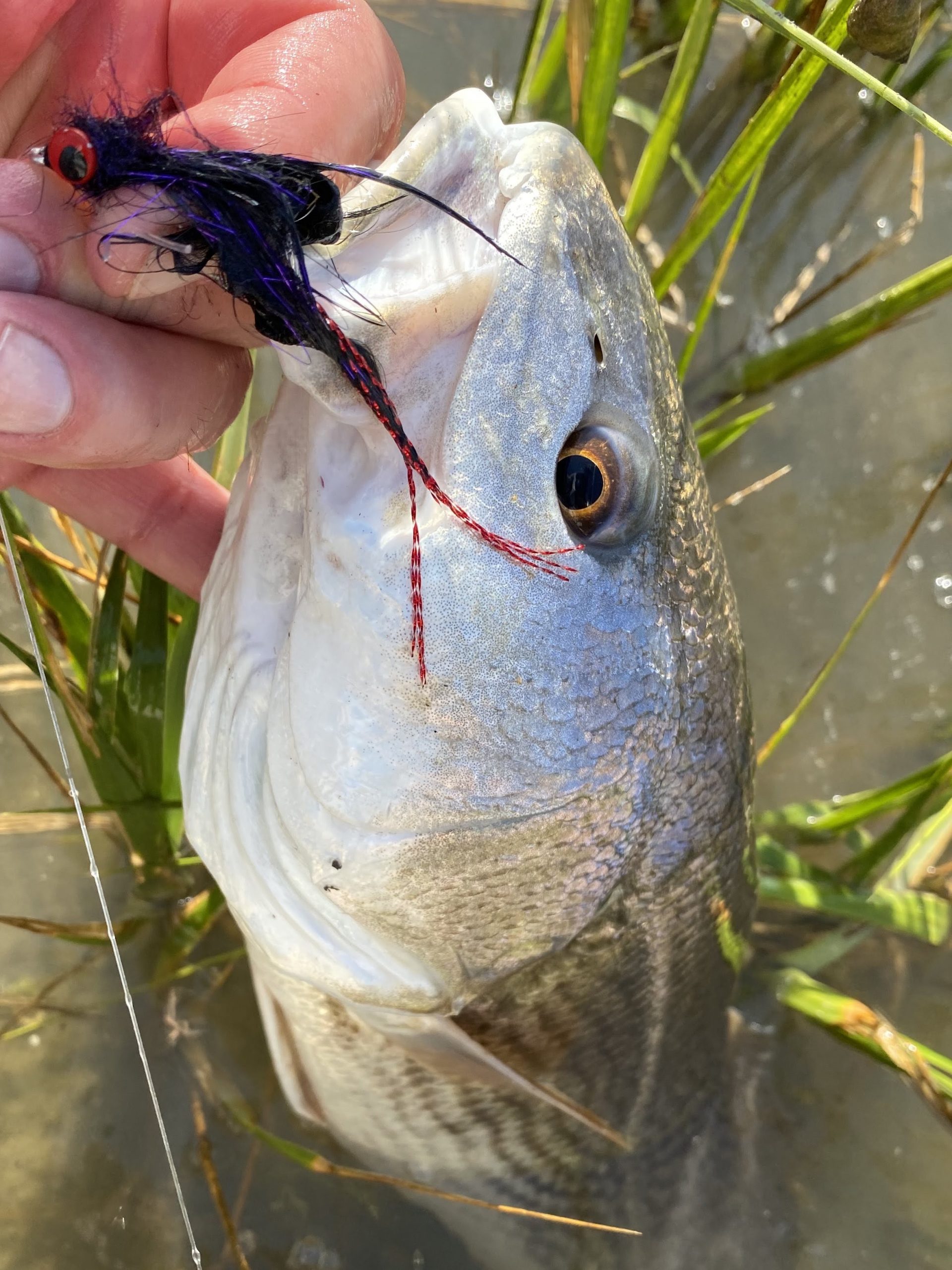 After spending countless years chasing trout in the mountains, I decided it was time to head towards the coast to chase some redfish. Reading the internet and trying to soak up all the knowledge prior to my trip I thought would help me to be successful. Maybe. It was time to experience my own personal DIY (Do It Yourself) saltwater wade fishing adventure.

Fifteen years have passed since my first trial and error in this new saltwater world. Telling stories about those days spent wading salt marshes over a few beers with friends still causes excruciating laughter. I soon learned that I knew a whole lot less than I had thought.

There were too many new variables not understood which complicated the puzzle of catching redfish in the marsh versus just loading my fly rod, waders, several thousand flies in a vest and taking off to the river.

I remember vividly that first summer chasing redfish. The allure of catching such a tenacious fighter on the fly actually kept me up nights focused solely on this ambition. These new passions never mindfully arrive at the right season either. I can’t remember what triggered this thought process about redfish, probably an article I read somewhere, but I started my exploratory adventure in the dead of winter and soon became consumed. On the bright side, I had five months to plan and learn – on the dark side, my patience was quickly wearing thin. 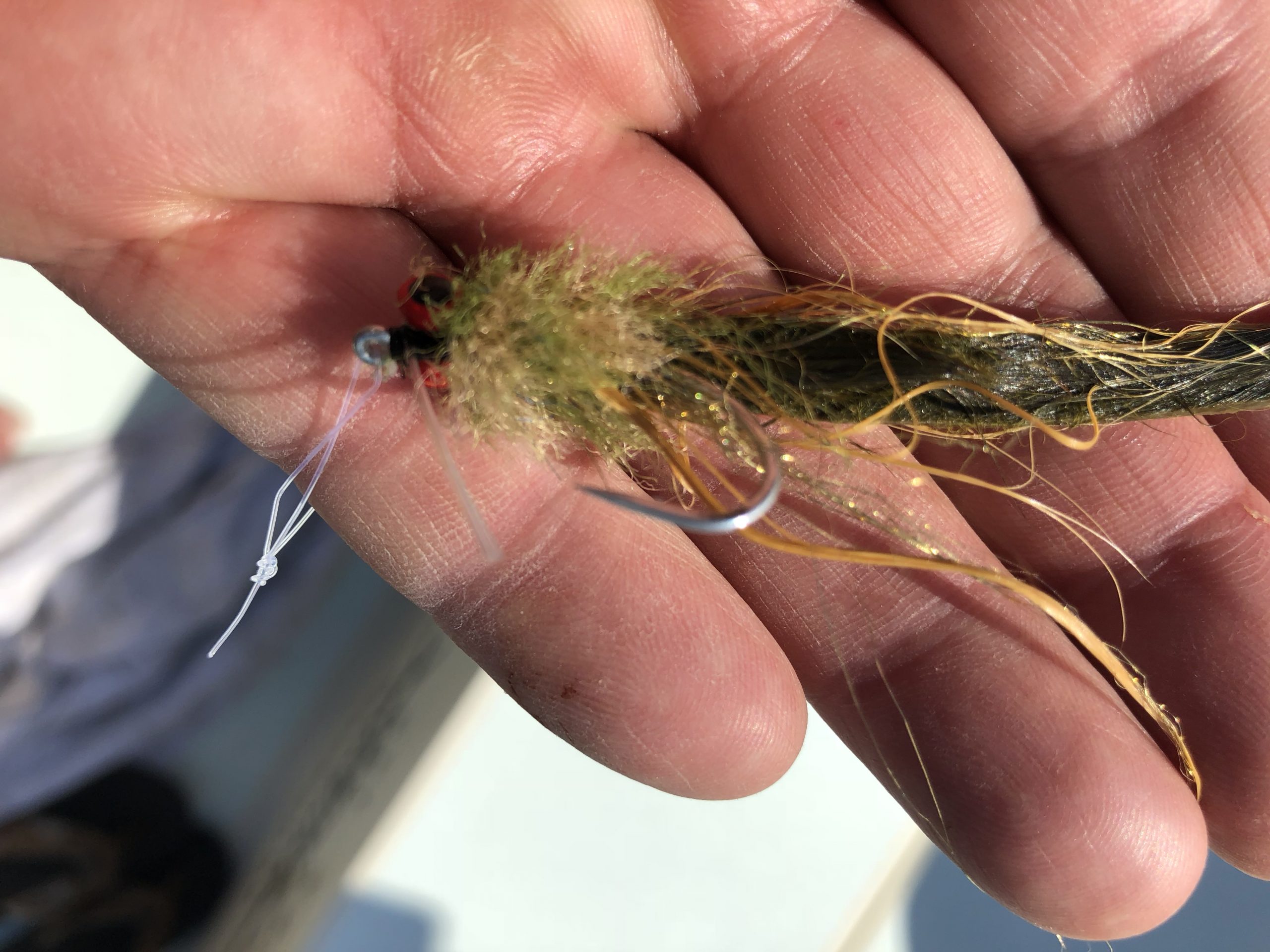 I recollect my first foray into this salt experience. The 3 ½ hour drive one way made for a long day. I arrived at what I thought to be a productive place in the middle of a vast salt marsh, sat down, and started swatting mosquitoes while waiting on a high tide to show up that never arrived. Somehow, I had miscalculated the tide based on my location and didn’t realize a 6-foot tide was needed to peak over the high mud banks. This particular tide was only 4-foot, therefore never flooding the marsh. The mosquitos won out and after four hours of sweltering heat and swatting bugs, I walked back to the truck, broken-hearted and smelling like a can of OFF Spray.

In the interim, I studied tide charts and found an afternoon tide that would reach the minimum 6-foot requirement, so I started planning again. By this time, I had also tied enough redfish flies to last several folks an entire lifetime. 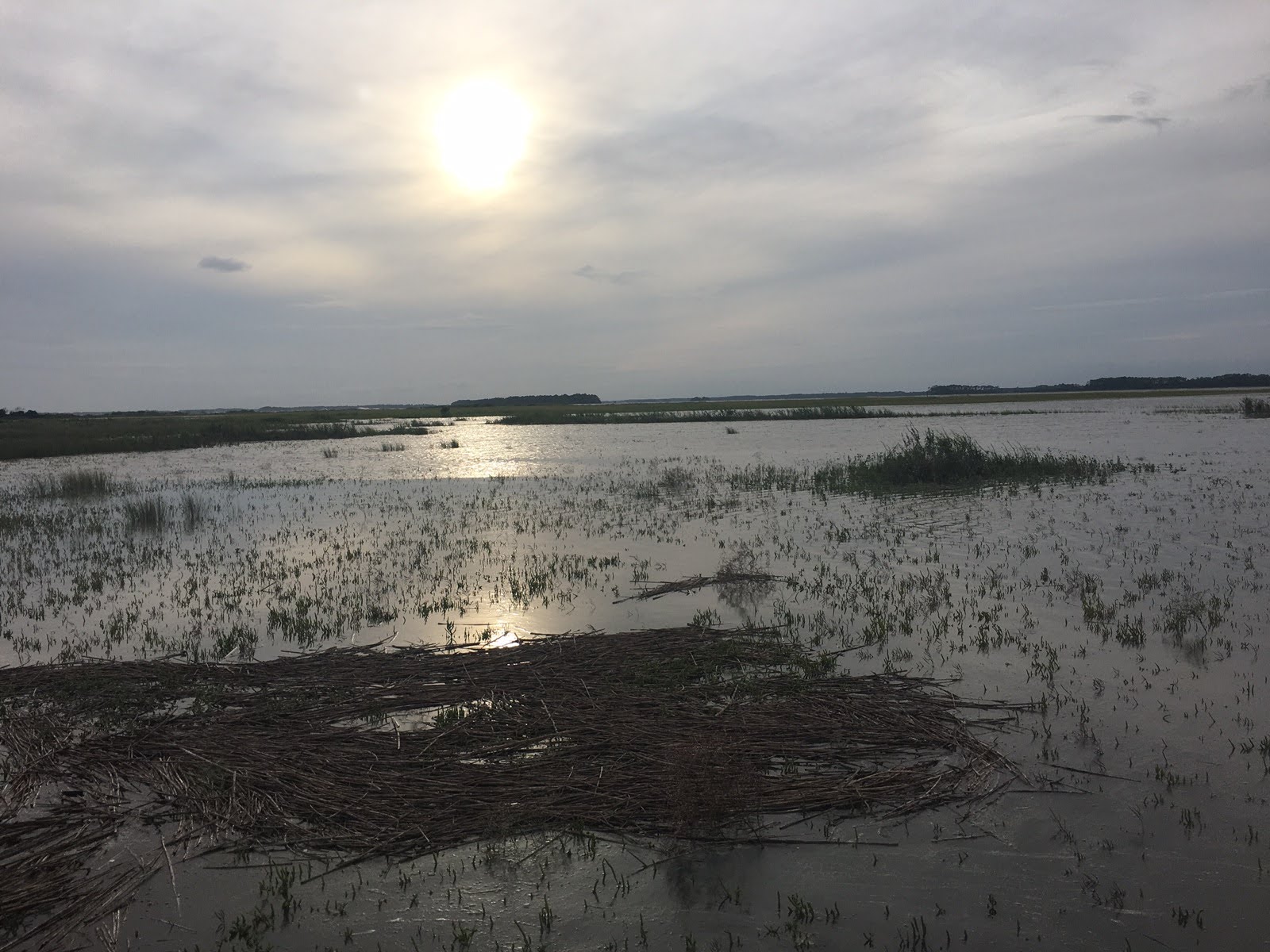 High tide was supposed to be full about an hour after sundown, which left plenty of daylight to fish before high water and total darkness fell. Again, I arrived a little early and decided I should find the feeder creeks, as the main water channel would probably empty into these first and then drain off. The temperature was a humid 90 plus degrees on the coast of South Carolina, with very little sea breeze. It didn’t take but one attempt to learn that tall marsh grass had a soft bottom and to focus my attention on the short grass. That mistake almost cost me a sandal.

Time almost stood still until the water eventually began flowing up the ditches or impressions just as I had suspected. I tactically decided to position myself above where they shallow out.

Catching a glimpse of that first redfish dorsal fin above the water’s surface line almost caused a malady called “Buck Fever.” Watching the fish dance on its nose picking up fiddler crabs in 12 inches of water, with its tail balancing its submerged half, is a vision I never forget. And the red and yellow hues of a fading sun mirrored in its scales. The black spots encircled by light orange coloring on its tail were like eyes, observing my every step. I stalked carefully so as not to make him blink. 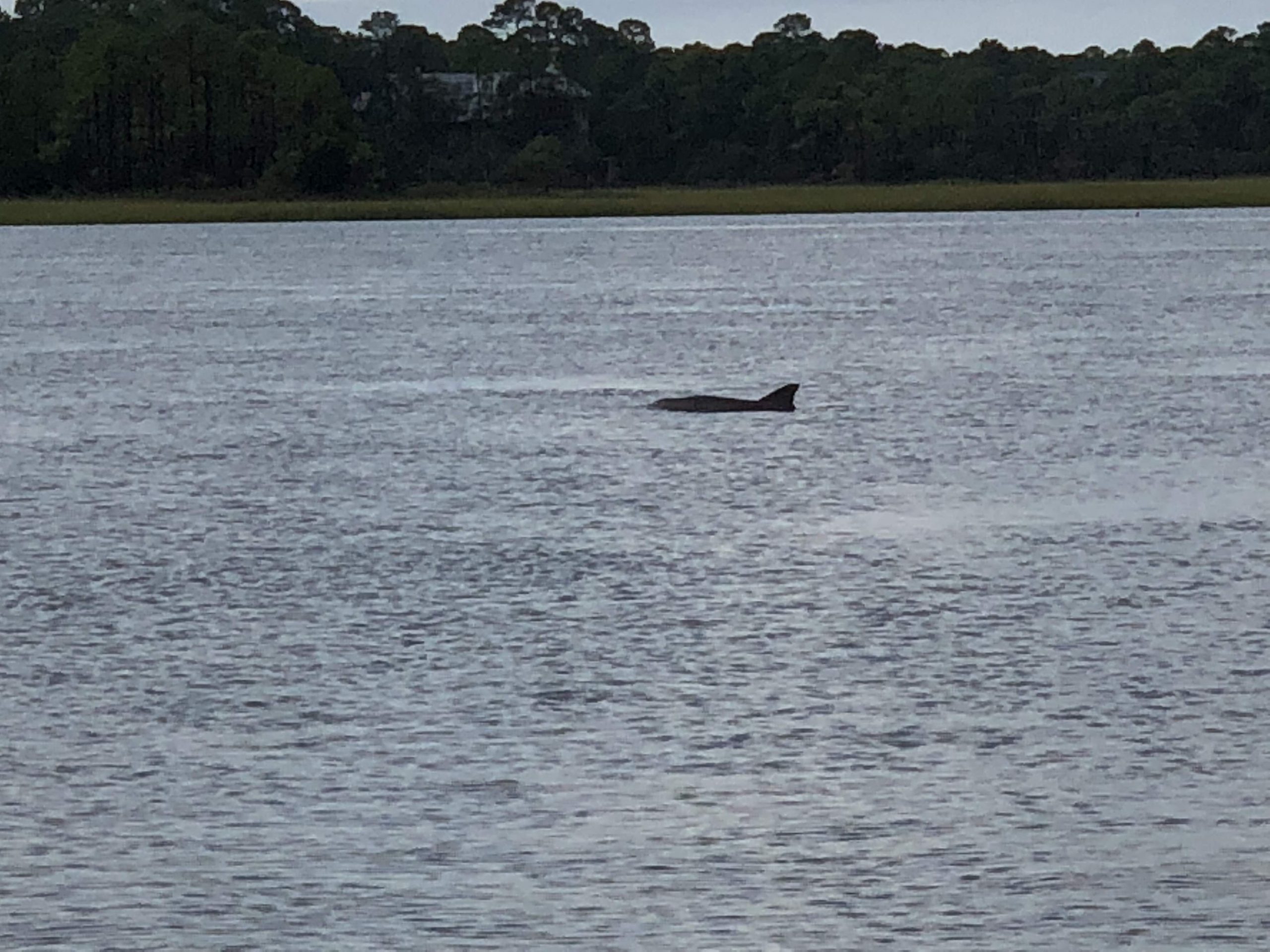 My concentration became intently focused on the redfish. Coupled with excitement and months of wrestling my impatience, it happened. Instead of placing a soft cast 3 feet in front of the fish, I accurately dropped the fly on its head. Never saw the fish depart but the wake and marsh mud explosion told me what I needed. My education process was learning the hard way. It wasn’t until later that summer when fishing with Capt. John Irwin of FlyRight Charters, that I learned to visually focus on the spot ahead. Of course, my hook-up percentages changed drastically with that tidbit of information.

Standing stoic and heron-like, I intently searched for movement again. I could feel the tickle of fiddler crabs inch cautiously across the top of my barefoot. A few minutes later I looked down and saw a blue crab perched on my foot with claws extended. The pain was so excruciating from trying not to wiggle my toes. I dared not move. Reminded me of how often my nose would itch every time I went for an eye examination. Finally, my new friend wandered off and I could again focus on my intended quarry.

The third shot at a redfish was the charmer! My cast landed in front of the fish, and I slowly twitched it as it approached. 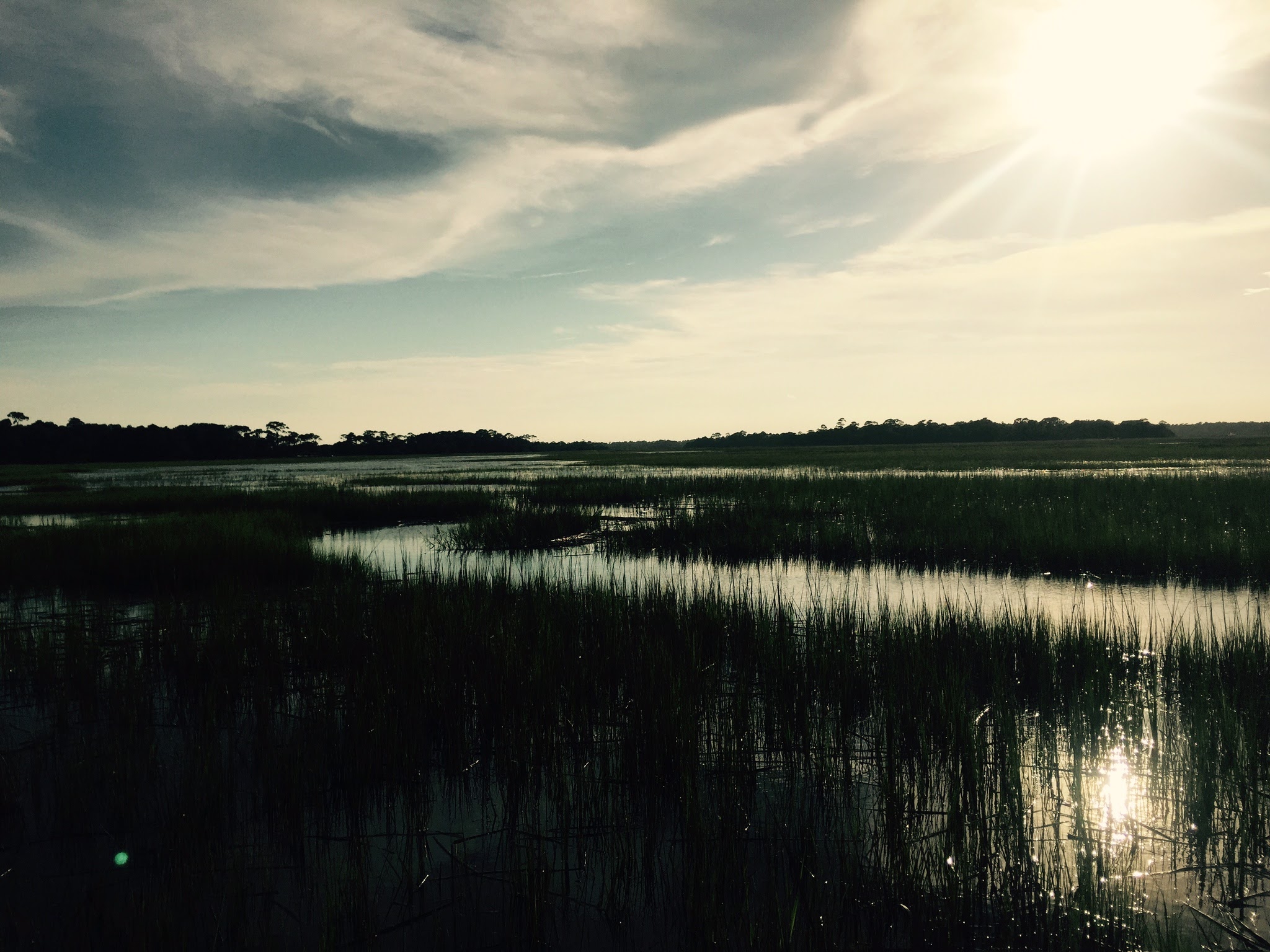 My subconscious, trout hook setting techniques, carefully executed through many years of practice, were not strong enough to allow hook penetration into their rock-hard mouths. For a few split seconds, I understood what a redfish adrenaline rush was all about! And then it was gone, and the rush replaced with agony and disappointment. More determined than ever, my success would soon one day blossom. History repeated itself several times that day.

As the colors of sunset changed to darkness, I just stood knee-deep in the marsh, only me, fish, and a rising tide. With a late arriving moon, stars peeped and glittered brightly with each passing minute. I could feel the push of saltwater moving in, marking the end of high tide. Where did the time go? Enjoying nature has a way of making time eclipse faster than I would prefer.

I was enchanted with the whole experience. I tried to inhale and replay the entire afternoon while I stood there. Several hookups occurred but nothing was brought to hand. As daylight passed, the amphitheater of stars rotated 180 degrees with no streetlights to dampen their effect. The smell of saltwater and marsh was totally captivating.

My body gauge of the water line now was about thigh deep and part of me had decided I should wade back to my truck. But the other part of me wasn’t quite ready to leave. I was standing alone absorbing the vastness of the marsh in darkness.

Suddenly, I felt a brush of skin rub against my submerged, bare leg. A stingray, shark, or dolphin I wondered. Then flashbacks of watching the Discovery Channel showing great white sharks tossing seals high in the air convinced me that I needed to hastily wade back out of the dark water. The faint outline of my white truck sitting high on a sandy road pointed me in the right direction. My legs moved like a propeller on a flats boat at full throttle headed home. The once empty marsh bottom was now a salt pond brimming with swimming creatures looking for a meal.

With my creative imagination, the size of whatever rubbed against my leg will never be known but the speed at which I departed, concluded an evening that will never be forgotten.

On a warm summer’s day, standing still in the marsh looking for blades of grass to part, a dorsal fin to show, grasping the thought of hooking just one tailing redfish, will forever bring goosebumps.