Of Flies & Fishermen Gone By

During a lifetime spent wading rivers chasing browns, brookies, and rainbows, it seems that memories and details of many trips fade like the passing of another day. Trying to remember specifics of older trips in years gone by has eroded.

As time continues its journey, I find that many old fly patterns, once successful, are replaced with newer synthetic materials and newer versions of older flies with different names. I am guilty of this and, like my fishing buddies, always searching for that “secret, never-failing” fly that works 90% of the time and is easy to tie.

After spending a rainy day rummaging through a chest of drawers full of “stuff” in my fly-tying room, I discovered, hidden under bags of decaying materials, 6 or 7 forgotten fly boxes crammed with “secret flies” from the 70s, 80’s and ’90s. My original goal was to provide some type of organization to this chest of stuff, but after finding these flies, my organizational skills came to a halt.

As I held these flies in the palm of my hand, fishing trips transcribed somewhere in a hidden closet of my mind were unlocked. Holding up an old, rusty, size 12 Grey Fox Variant sent me on a float trip back decades ago. Dry fly fishing pocket water and eddies with the fly and catching enough fish to keep it interesting. Where had these memories been? 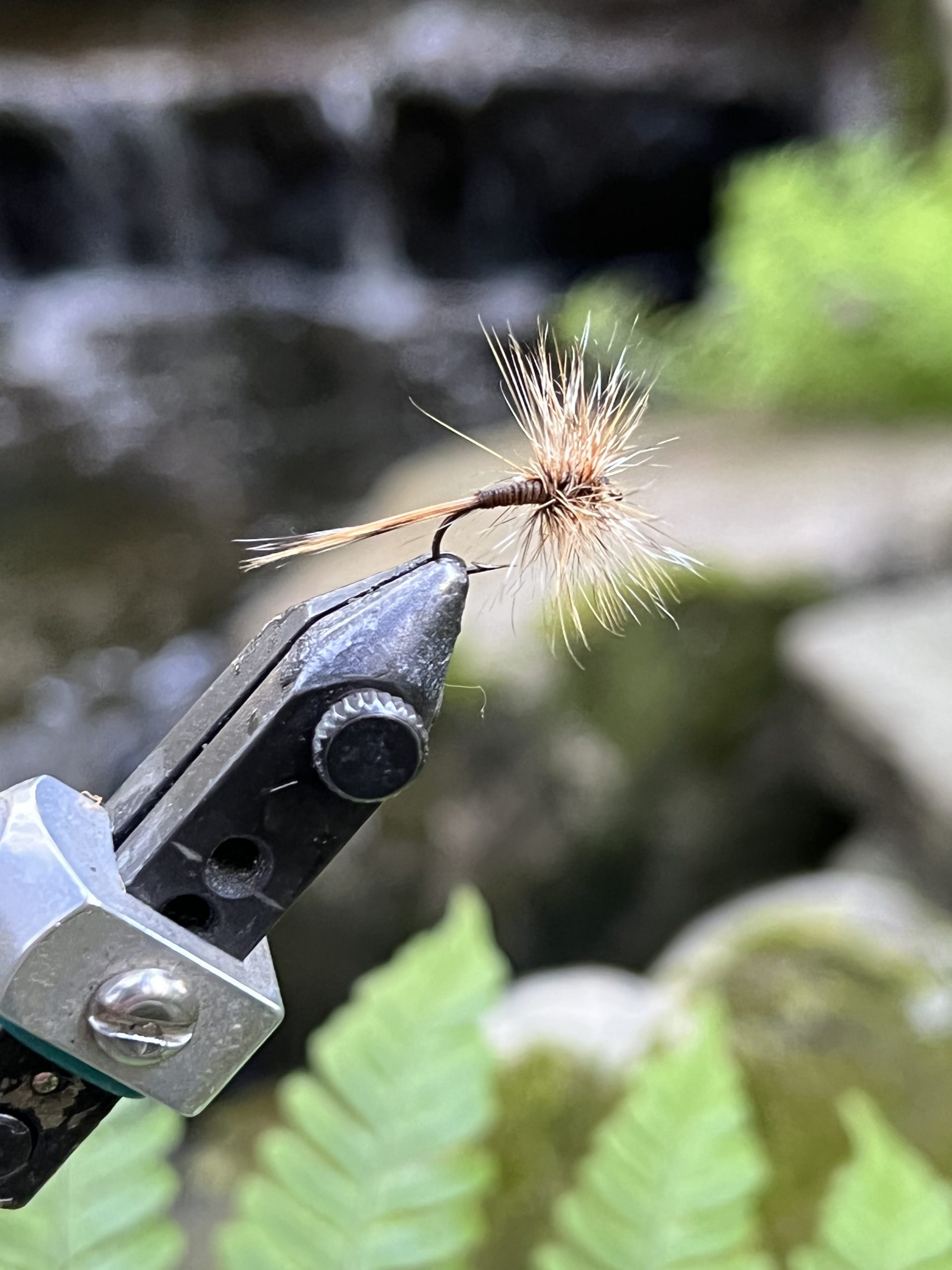 That was such a great dry fly to fish throughout the southeast Appalachians in late March and April. From fishing foam lines to dabbling in pocket water, the fly regularly produced fish. The late Art Flick promoted this fly, in larger sizes, to be fished during the Green Drake hatches of the Delaware and other upper New York rivers. This fly was consistently a great searching pattern and has taken fish when no mayfly activity was seen. The striped quill body combined with an olive thread underbody gives this fly a segmented effect. Coupled with oversize hackles, it floats extremely well. For reasons unknown, for over 30 years, this and other flies laid dormant and overlooked in the fly box, hidden in the bottom of a drawer and my memory.

Surprisingly, beside the Grey Fox flies, somewhat mashed down and compressed from other flies, lay several Adams Variants. This particular fly had been my go-to summer pattern in periods of low water during the warmer months. With a golden pheasant tippet tail, yellow ostrich herl body, and grizzly tipped wings in smaller sizes, it daintily lit upon the water’s surface with barely a ripple. Thoughts of early summer mornings on the Davidson River before it became so popular and overpopulated; wild rainbows had a difficult time refusing this fly when presented properly.

Instead of organizing, I continued to rummage and plunder, searching for other forgotten treasures. And there it was, laying neatly in the back of the bottom drawer, totally obscured from view, was my Fishing Log Notebook dating from the 1980-90s and around. Excitedly flipping pages, I began to read all the journal entries. Though I may not have been consistently up to date at the time with all my entries, looking back, I marveled how I could retrace my many footsteps. What a personal and wonderful historical find. The notes, shorthand, and scribbling wouldn’t mean much to anyone without some type of verbal explanation. I took the wrinkled notebook and sat down in the chair near my tying bench and began to reminisce as I read and deciphered my ridiculously terrible handwriting on those old yellow pages.

“Wednesday, November 20th, 1985. Fishing alone today. The day before Thanksgiving and had taken off to fish the Chattooga River. No cars in the parking lot. It was overcast with highs in the upper 40’s and cloudy, and the water temperature was 44 degrees Fahrenheit. Fished towards Reed Creek very stealthy; the water was low and clear. Blue Winged Olives were hatching in several runs, size 20-22, and fished dry to rising fish using parachutes and enjoyed the afternoon. Catching 2-3 fish per run and then moving up. I felt blessed and thankful to be there.” 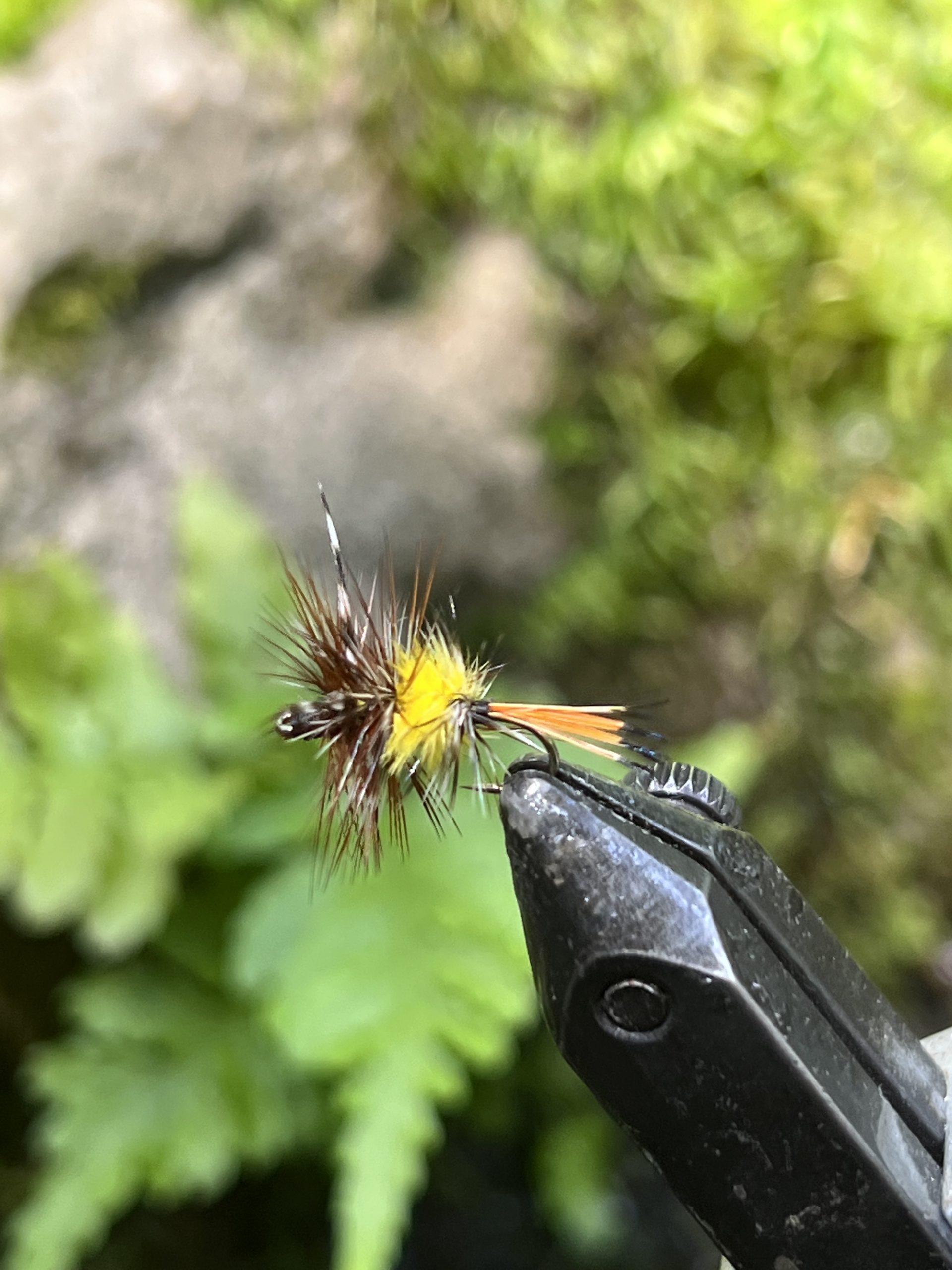 “Friday, May 2, 1989. Fishing alone on the Davidson River above Avery Creek in the evening. Decided to fish my favorite runs until dark. Sat on the riverbank and ate supper, needed time to unwind from a hectic week at work. 7:00 pm sparse hatches of Light Cahills and Yellow Sallies. Decided to watch for a little while. The Cahills were size 16, light cream in nature. I decided to use a light quill bodied parachute tied with wood duck wings. The last hour before dark was incredible and filled with 12” wild and frenzied jumping rainbows, which put a good bend in my 4-wt rod. I may revisit tomorrow evening!” I didn’t document fishing the next evening, but there is a good chance I probably did go.

“June 2nd, 2001 George and I fished the South Holston River below the weir. The sulfurs were very sparse, but a few risers. Fished a cranefly pattern with much success and pheasant tail dropper size 18. Mike Harvell (one of my lifelong fishing buddies also) had presented me with a 10’ 5 wt. Kennedy Fisher rod, like the one I had bought in 1981, and broken. I nicknamed this rod the “Spirit Rod” in honor of his late father, who had fished it for years. It was previously his rod and had successfully fooled countless fish. What a special gift and every fish caught was a tribute to the previous owner.”

The rest of the afternoon was spent on a quiet stroll down memory lane. Any organizational endeavors were forfeited for this hike to the past.

I wouldn’t think to write in my fishing journal now, after so many trips have passed and years elapsed. Spending a few hours reminiscing, and re-living encounters of my past fish, fishing trips and the good times shared with friends, is enough for one tattered old log.