No Fishing In Your Pajamas

And other strange, silly and downright dumb attempts to control our right to fish.

If it weren’t for fishing rules and regulations, our waters would be virtually depleted of species. Recreational fishermen probably wouldn’t have anything left to catch but shiners and a few sand sharks. Of course, any set of laws that has been spawned by government entities, be they local, state or federal, is bound to have some laughable entries. Here are a few fishing regs that will hopefully bring a smile to your face, if not a shake of your head. Names have not been changed to protect the innocent because they’re all guilty.

In no particular order of absurdity, here’s a short list of fishing foolishness:

Did you know that the state of Ohio prohibits anyone from getting a fish drunk? This of course takes the “fair chase” out of fishing, causing said quarry to drop its guard and succumb to the first skirt that sashays past. If you get a female fish tipsy, she could wind up preggers, and you could find yourself in the shallows guarding a bed next spring. Remember – that cooler of cold beer is for the fishermen, not the fish.

While you’re in Ohio, it’s also important to know it is illegal to catch fish in your pajamas. This recalls the Groucho Marx joke, “I shot an elephant in my pajamas. How he got into my pajamas I’ll never know.” But we all know fish don’t wear pajamas. They can’t button them with their little fins. Nightgowns maybe. But you start mixing nighties and liquor and intoxicated fish…well, it could get ugly. 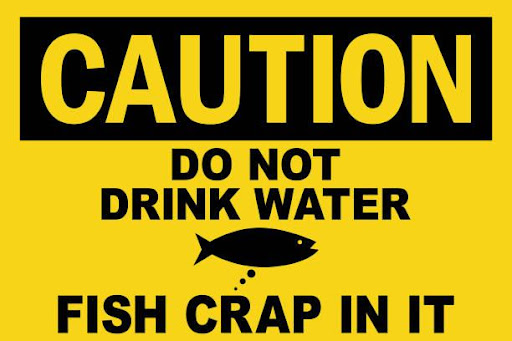 In Nebraska, it is illegal to fish for whales. Not to encourage scofflaws, but should you find yourself being cuffed by the local authorities after hauling up a hapless humpback, remind the officers that a whale is a mammal. Therefore, you were not “fishing” but rather “whaling.” A good lawyer should be able to take advantage of that linguistic loophole and get you off the hook for little more than a nice chunk of fresh blubber.

Before you grope for fish in Indiana, be aware that you can be arrested for using your bare hands. So, wear some gloves. And don’t even think about grabbing your rifle or shotgun to go fish-hunting in Wyoming. Yep. Against the law to “take, wound or destroy any fish with a firearm of any kind or nature.” Guess that rules out minnow-stunning with a bb gun. (Great fun by the way, but you didn’t hear it from me.)

You probably have a crazy uncle named Mel from Muncie, right? Doesn’t everybody? Several fries short of a Happy Meal, Mel loves to tempt fate by carrying his fishing gear through the local cemetery. Probably trying to get his mug on the next episode of “Cops.” Everybody in the greater Muncie area knows such activity is forbidden by law. Wonder if he uses live bait?

If you happen to be a grizzly bear trapped in the body of a human – kind of like a female swimmer trapped inside the body of a male swimmer…or is it the other way around?… then you’ve probably been to the salmon streams of the Pacific Northwest for the spring run and snatched up dinner using nothing but your pearly whites. Well, don’t try that in Pennsylvania. There’s a $100 fine for fish-biting. It’s also illegal to use any other body part to catch fish…so watch what you dangle when you angle.

Can you imagine there being a wacko fishing reg in Washington DC? No Shinola, Sherlock! It is illegal to fish from horseback there, so dismount before you cast. It seems there was a rare unanimous vote by Congress to outlaw equine anglers – they couldn’t stand to see perfectly good horseshit simply drift away. Such a waste.

In New York, it’s okay to accidentally spook fish, thus screwing up your chances of catching them. BUT, should you decide to “intentionally and overtly scare fish” with your actions – like jumping in the water and screaming “Off with your head!” – then you’re in hot water.

And we don’t have to tell you that it’s illegal to lasso fish in Tennessee. Everybody knows that. 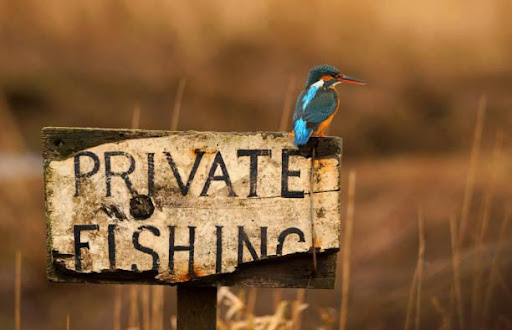 So much for government and its ineptitude. There’s a totally non-governmental group out there that wants to regulate our fishing that makes Congress look like a MENSA board meeting. Always good for a laugh or two, PETA has some doozies that should have you shaking in your waders as you tie on the next wooly bugger.

PETA actually petitioned to have the word “fish” changed to “sea kitten.” The idea was sneaky smart; if fish were called sea kittens, no one would eat them. And we’d all be called “kitten killers.” Let’s just split the difference and call them “catfish.” Fry ‘em up!

A few years ago, PETA decided to tell the University of Notre Dame to ban the school’s fishing club. “Fishing is a blood sport that causes immense physical and psychological suffering” PETA wrote in its letter. “Fish have particularly sensitive mouths that they use in much the same way that we use our hands.” The Fighting Irish responded by going to the nearest reservoir and “rippin’ some lips.”

Finally, thanks to The Outdoor Hub for alerting us to the coming “angler’s apocalypse.” PETA is about to unleash “Aquatic Angels” upon us. Just when you thought it was safe to wet a hook, here come submersible drones that will, like mini-Polaris subs, sneak up on us as we enjoy our pastoral pastime, and scare the Bejesus out of us! One of their targets is shark-fishermen who illegally chum. I’m sorry, but is an underwater drone going to make it through a Mako feeding frenzy? Bet not.

And a few more quickies for a smile…

In Idaho, you may not fish from a camel’s back.

It is illegal to fish on the Ohio River in Kentucky without an Indiana fishing license.

In Ohio it is illegal to fish for whales on Sunday.

In Pennsylvania, it is against the law to fish with dynamite.

In the state of Washington, you can’t harvest a fish by throwing rocks at it.

Now, go have fun but leave the rocks and dynamite at home.

(Rivers and Feathers fully supports our fish and wildlife officers, despite the ridiculous rules and regs they sometimes must enforce.)