Has there ever been a fish that you have hooked and lost, which has haunted you?

Maybe it’s a fish that still lays hidden beneath a dock, under a log, or tucked into some other invisible concealment. The thought of this lost fish just sits in the back of your mind, constantly replaying every detail of your encounters. 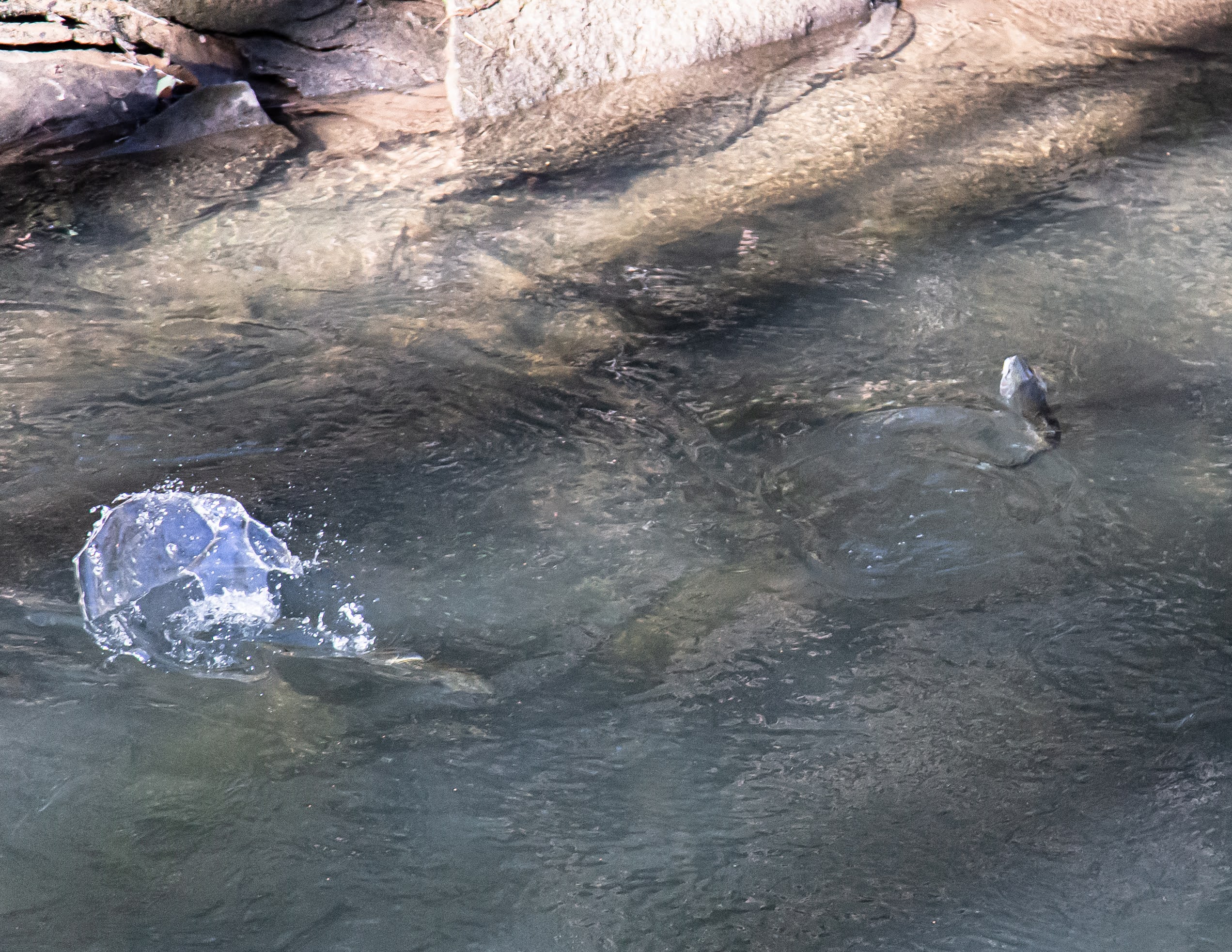 If a person fishes long enough, there too will be a “ghost fish” in their lifetime. I have one that haunted me. It was a giant rainbow of many seasons that could easily be a trout of a lifetime without exaggeration. What becomes more disturbing to me is that I had hooked this” ghost fish” on more than one occasion, and, through fish karma, it continues to elude me.

Remembering essential details clutters my thoughts, and the other hookups merge. Points run together include trip planning and preparation, air temperature, and forecast down to the barometric pressure, water level, clarity, what time of day I hooked the fish, and why I chose that particular fly! Was my tippet material too small? Was the fly tied on the wrong kind of hook and not strong enough? Maybe I used the wrong type of knot and didn’t cinch it down tight and double-check it?

I can vividly see its lair and know intimately the small run coupled with pocket water it calls home. The undercut bank provides refuge from predators peering from above. There are three large rocks above this pocket of water break the current and create a back eddy. The eddy is deep, and the bottom, flushed out from seasons of high water and sudden storms, now contain pea gravel primarily. A white, bubbly foam line runs around the rocks and allows the fish to grab a quick meal and safely return home. Experience tells me the undercut bank is a tippet magnet that has become a forest of roots, providing a secure maze through which only a fish can manipulate.

It’s a difficult section to get an actual drag-free float with a nymph and a dry fly. The tricky currents require the high sticking of the fly rod. Fishing the edge of the white foam where the stream flows beside the rocks consistently produces some smaller rainbows.

Knowing that “Moby Dick” lurks inside the foam line next to the bank makes putting steel to fish lips of the smaller rainbows appear as only practice. Though I like to catch fish of all sizes, the thought of that monster peering skywards through the mirrored water at my futile attempts to fool him is frustrating.

This section of the river is open to the public, and I worry that somebody will catch my fish before I finally get a chance to land him. I want to admire his olive back, the vibrant red stripe that runs the length of his body, and the silvery underside, which blends into a pearl iridescent color as it nears the tail. He would be gently unhooked and released back into the current to find respite inside the undercut bank. I just yearn for another chance. I have hooked him on several occasions instantly. And I was left standing in knee-deep water empty-handed, holding onto a memory of an apparition that instinctively disappeared. 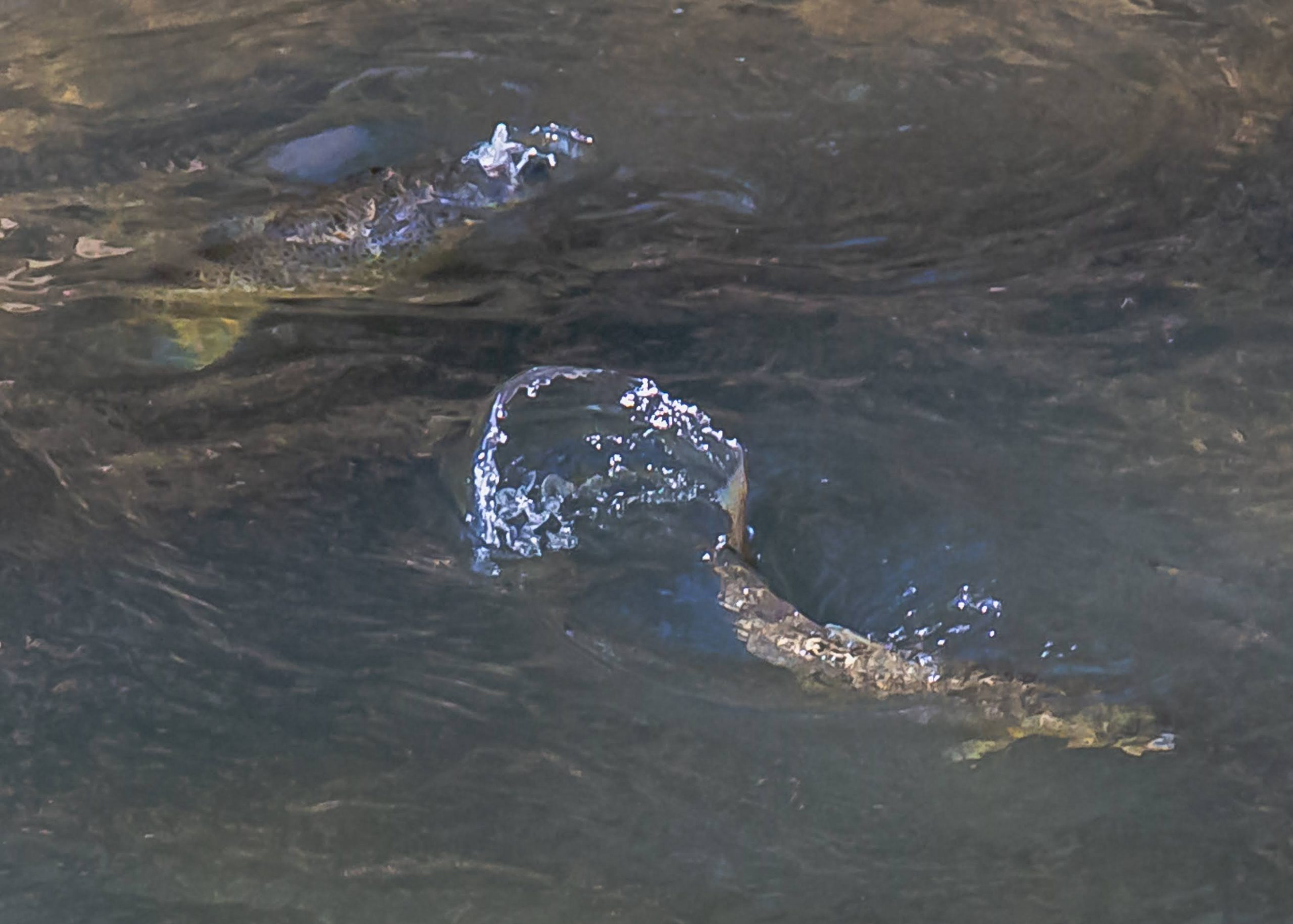 I recollect an early spring overcast afternoon where I had the river to myself. It was unusual. Not another car in the parking lot or footprints ahead of me along the river’s bank. A good afternoon of solitude, coupled with the sounds of a running river, the cold water running through my legs, and the aromatic invigoration of genuinely fresh air.

I stopped and fished a few small runs and managed to hook and release several small fish, but my sights were focused on the big rainbow. Was he still there? Midges and small blue-winged olive mayflies were hatching and bouncing off the water’s surface. They became more prolific as the afternoon passed, and I hiked up the path on the river’s edge. Several fish began breaking the surface and inhaling the adult insects as they rode the current, drying their wings. Any other day I would have stopped to enjoy fishing a dry fly as the insects were hatching like popcorn everywhere, surrounded by receptive and hungry fish.

Would today be the time when I finally get to hook and see this “ghost fish” that had taken up permanent residence in my head? I eased around the river bend and stood next to the hemlock, attempting to conceal myself, and just watched. The smaller rainbows fed feverishly in the foamy current as I had thought. I sat and enjoyed the show, looking for my one particular fish.

He began to feed on the corner of a rock, careful not to distance himself from the undercut bank. Slowly his head would break the surface and just inhale an insect. Again and again, he fed. I became mesmerized by this enormous fish sipping such a tiny mayfly so delicately that I dared not move to disturb him.

It was then I felt a connection. A wild fish was surviving. The last details of hooking and losing him became clear but no longer critical. I had no expectations of him being there that day but just hoped he would. Now that I knew he was there, as I watched him feed secretly, I just sat there with focused admiration. The insect hatch slowed almost as quickly as it had begun, and he mysteriously disappeared back into the undercut bank. I got up and fished my way back towards the truck, casting dry flies and catching stragglers still hungry. I had seen my “ghost fish” and felt a pensive realm of calmness while memories of previous frustrations vanished. I left the river that night in a happy and excited mood; I had come to grips with my “ghost fish.”