One of the greatest fishing experiences in life is not always a journey to some predetermined exotic fishing destination or landing that trophy fish to be photographed and released for bragging rights later in time. It’s about the people you fish with and the many adventures you all enjoy together throughout the years. 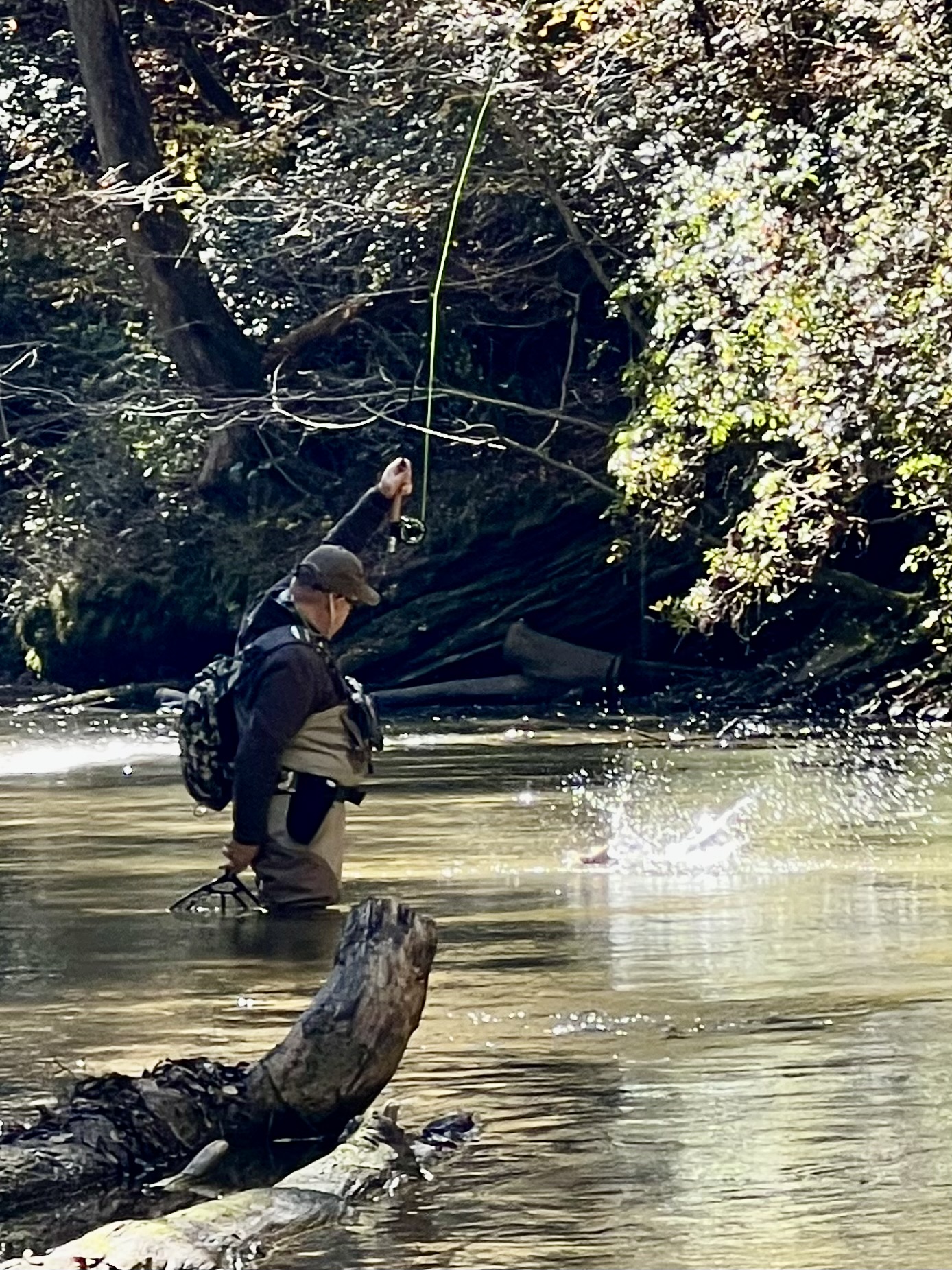 Besides sharing the sport with children and grandkids, I consider sharing trout waters with the same guys for over almost 40 years or more to be quite the accomplishment in itself. To be lucky to have such a long history of fishing friends can be loosely defined as a fishing family and encompass an endless list of stories.

There is one exception, however. We taught a “young” new Trout Unlimited member to fly fish during a local outing 20 years ago. Today he’s still referred to as “The Kid.”

From marriage to children, hospitalizations and illness, career path interventions, life’s tribulations, high water, hurricanes, flash floods, shark encounters, and sea sickness, and now the addition of grandchildren to pass these stories down to, our loose group of fishing friends still remains very close. No matter what life would throw at us there was always one resolve; just go fishing and continue searching for the next adventure.

Everyone is still healthy, able to fish, and has somehow managed to survive all the “low budget” but fabulous excursions we have taken throughout the country chasing fish.

Floating the West Branch of the Delaware River at extremely high water with individual pontoon boats and laughing as the frothy white water whipped us quickly down the river. A few fish were caught but not many. An aging memory can only think of 3 total during the rapid ride down the river. We had hauled the boats 15 hours, frames stacked high in the back of my truck, from South Carolina and were determined to use them, especially since the water was too high to wade. But that’s how fishing trips go. If high water in New York, then drive south to Pennsylvania! 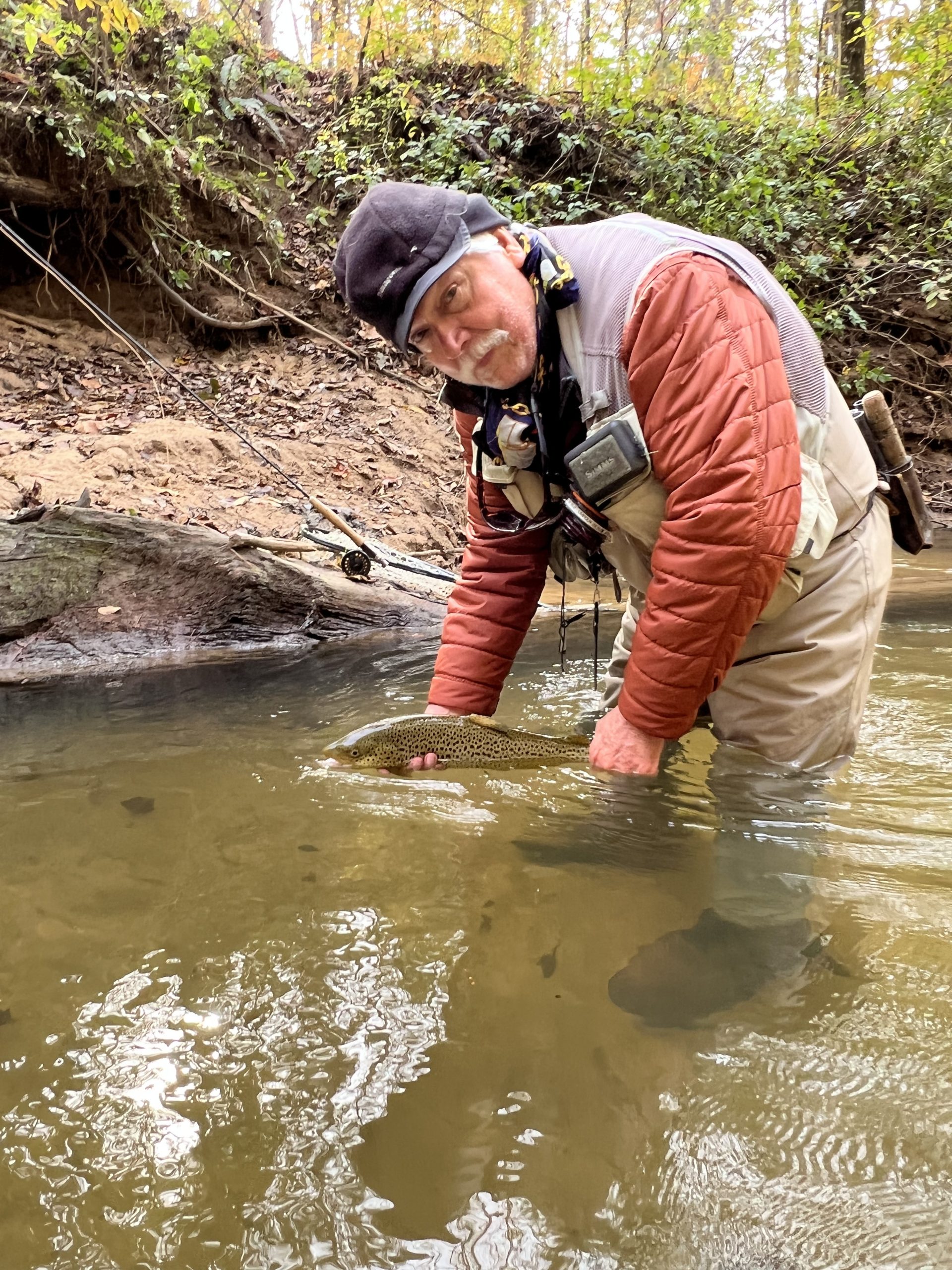 Camping trips involved sleeping in vehicles, leaky tents, sleeping on picnic tables, and in a car dealership lot because it was thought to be safer, and certainly cheaper, than a motel. We remembered to leave early before the dealership opened. Another attempt to save every extra penny to buy fly tying materials and equipment.

It’s not the fish that we remember first but the events that encompassed the fishing experience. We made journeys to chase and catch fish and these events surrounded that experience, but all the other non-fish-related experiences dominate our conversations during fishing family get-togethers and outings.

Driving 21 hours in 1981 to Baldwin, Michigan to catch salmon in the Pierre Marquette and Baldwin Rivers. Driving straight through and getting out of the car and jumping directly into the river instead of checking in and resting for a few hours. Going from 10-to-15-inch trout in South Carolina to 10-to-15-pound chinook salmon in Michigan was nothing but a pure adrenaline rush that could only be cured one way: by hooking salmon. After fishing all day, I remember that first night in Baldwin. It ended early.

We drove through parts of Colorado one fall week trying to fish as many Blue-Ribbon waters as humanly possible in six days, despite the heavy snowstorms. Fishing dry flies during a blue-winged olive hatch on the Colorado River while the snow decreased visibility down to mere feet. Not to mention that one in the group started a sing-along at the Laughing Ladies Restaurant in Salida, CO with an emphasis on Johnny Cash songs. 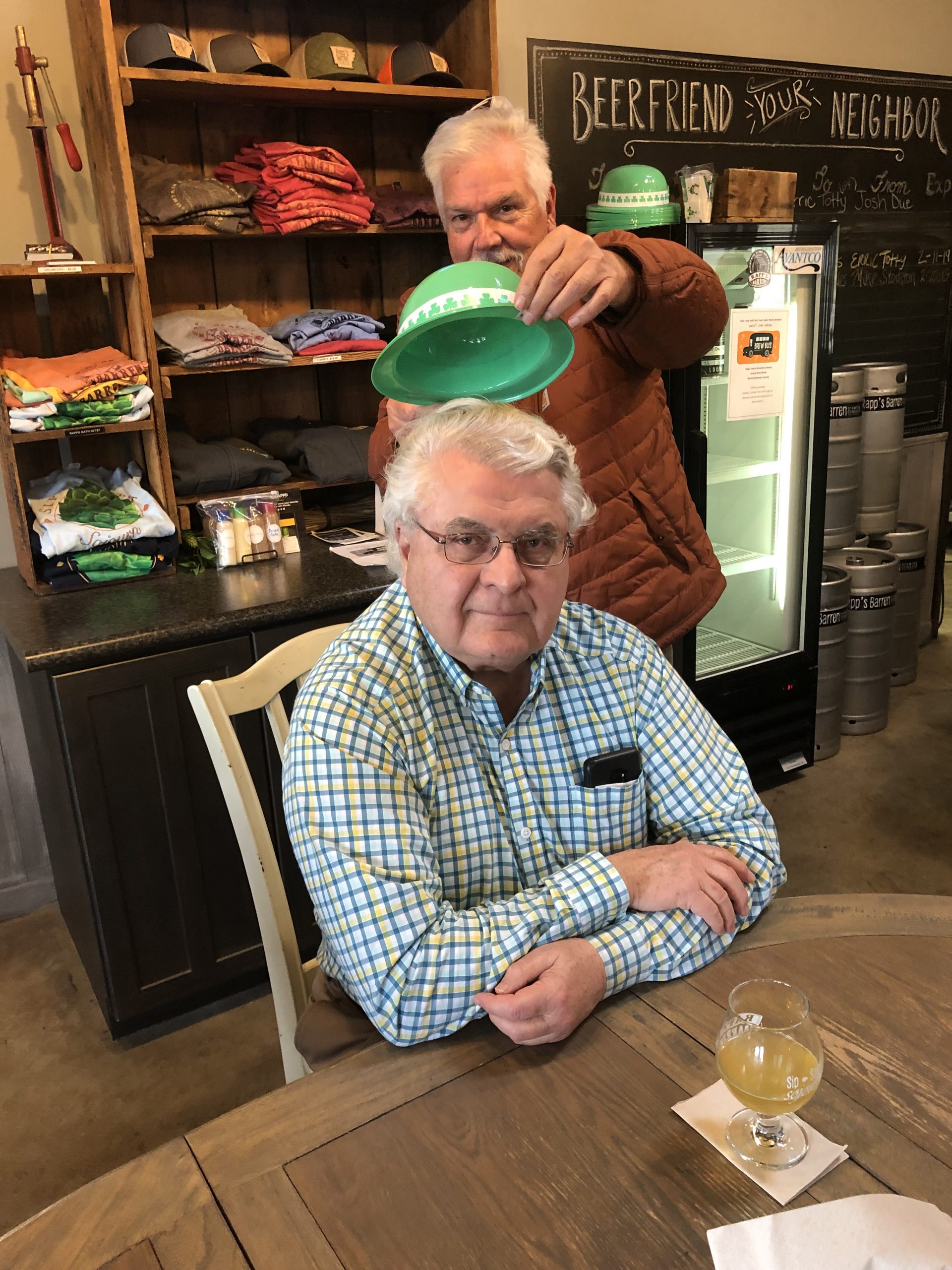 One year an Enterprise van – probably manufactured and designed to haul school children to special events, which explains the academic discount we received at the rental counter – was driven for a 12-hour journey over to Mountain Home, Arkansas to visit the White River. The fishing was excellent, but the stories revolve more around the karaoke sung at the Mexican Restaurant. It’s hard to forget that rendition of the Allman Brothers’ “Whipping Post. Several patrons didn’t stay long enough to get their “To Go” boxes. Later, at the hotel in Cotter, Arkansas, there was a sign in the bathroom that read, “Please do not clean fish in the sink!”

During another trip, one hotel proprietor was so proud of the new mattresses that were recently purchased that he made a point of coming around to all four of our rooms, wanting to know how comfortable they were, seeking some form of reassurance of his investment. We happened to be gathering outside the rooms to head out fishing when he walked up.

Of course, one family member then mentioned that indeed the mattress was comfortable and that his wife was wanting a new mattress, and what kind did he recommend? The proprietor then explained that he had gotten a good deal from the Holiday Inn across the road, as they were changing theirs out. He then gave my friend the phone number and contact information. Needless to say, ours were the only 4 rooms rented out that particular week.

Some stories include fishing till ‘dark-thirty’ because the fishing was so good – with wild fish sipping dry flies during the evening hatch – then remembering that we didn’t grab a flashlight and the truck was 3 miles back through the woods. Thankfully, if we walked by or over any snakes, we didn’t see them.

We understand each other as to what type of water each likes to fish such as pocket water, runs and pools. And we know not to leave our fly boxes unattended in the truck, as it is customary that they be filched by the others. It is also tradition that we torment each other like brothers on the river, and tell the same fishing story repeatedly in five different variations during times of excess libations. Seems each time a story is told, the fish count changes along with their size, but it really doesn’t matter. The intervention of cell phone cameras has quieted some of the braggarts when a witness is not around for verification. Although there are still times when a witness can be bought and coerced using adult beverages.

There is an inherent admiration for each other and our various fishing abilities. All of us tie flies, but within the group is a spirit of individuality in trout fly perspectives, and the way we see flies and tie them, which makes this such a great sport and hobby. All are excellent fly tiers and even better fishermen. 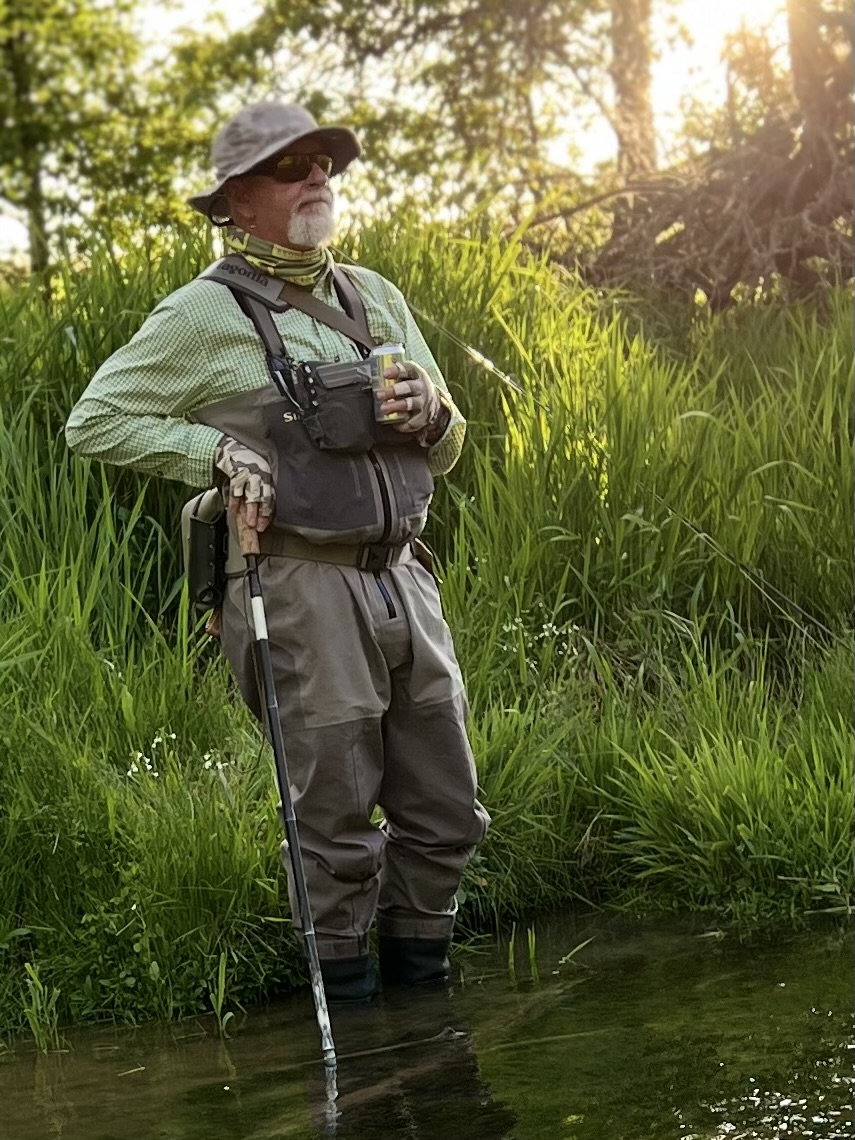 One fellow’s fly box looks surreal, with flies neatly stacked and proportioned according to hook size and color. Each fly box contains a toothpick to pop up flies from the rubber tacky. The flies he ties are delicately balanced and proportioned and require extreme patience and skill, along with good eyesight. I admire his flies and love to raid his fly box when left unattended. That’s what the backseat on trips is for.

I’ve also tried to emulate his organizational skill with my fly boxes and even went to the extreme of using a Sharpie to write on the outside as to their contents. Finally, I had to purchase another fly box and just wrote on the outside, “Surprise Me.” My fly box toothpick was used after the first shore lunch I packed.

Another fishing brother believes in tying only sparse flies. Each fly had barely enough material to cover the steel hook. “Old-timers tied sparse flies,” he would say. We always thought he didn’t want to purchase more materials to tie with. He tied them with natural materials such as fox fur, muskrat, groundhog, squirrel, and dog clippings from his wife’s groomer. He kept giving her zip lock baggies to use after she swept the floor between canines. Yet he is a true fish-catching matching machine, so I cannot argue with his sparsity.

It doesn’t matter with whom we share stories, our fish always grow in size, girth, and stature in the stories to our non-fishing friends. It is amazing how fast a fish can grow within 2 hours of catching and releasing it. But exaggerating the size of a fish is not a lie. We decided many years ago that fish could always be bigger if flattened, fileted, or squashed by a truck tire, so why not go ahead and figure that length in also. We fly fishermen tend to look at fish through two eyes; one eye to see what and how we caught the fish while the other eye sees how big we really want the fish to be.

The legal advisor in our little group developed an outstanding definition for this concept. He states that “a fish-related exaggeration is not considered a lie but merely a slight nonintentional overstatement of facts that occurred during a time of high excitement, which could then blend the many visual memories into one.” This definition helps me to sleep at night.

Since 1978 we have trudged through many rivers, taught each other new fly patterns to tie, fished new places, and shared life experiences, but most of all we continue to have fun and share a long-lasting affection for each other, our families, and the fish that brought us together.

“One thing becomes clearer as one gets older and one’s fishing experience increases, and that is the paramount importance of one’s fishing companions.” – John Ashley Cooper