Also called willow flies or shad flies, mayflies spend most of their lives underwater. As nymphs, also called naiads when in their aquatic form, the insects look somewhat like elongated or flattened crickets or maybe a cross between a cricket and a shrimp. When they emerge from the water as winged adults, they create huge swarms.

“An adult mayfly somewhat resembles a large mosquito and many people are afraid the flies will bite them,” stated Dr. David Held, an entomology professor at Auburn University in Alabama. “However, adults don’t even have functional mouthparts. Adults can’t feed or sting like bees. They are harmless. Sometimes, mayfly hatches grow so massive that they create swarms big enough to detect on radar. Millions or even billions of creatures can cover trees, cars and everything around.” 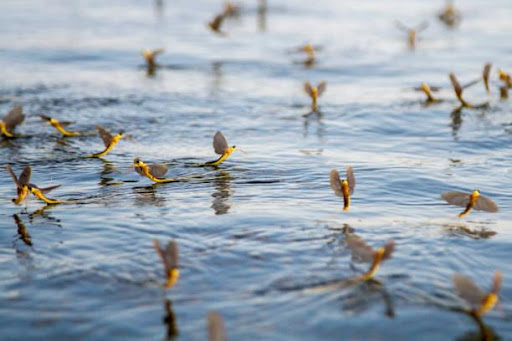 On July 3, 2020, a gigantic swarm appeared on National Weather Service radar 50 miles away and blanketed the town of Burlington, Iowa. In 2014, a hatch on the upper Mississippi River near La Crosse, Wis., reached an altitude of 2,500 feet. On radar, it looked like a significant rainstorm. In June 2015, a hatch along the Susquehanna River near Columbia, Pa., grew so thick that police had to close a bridge over the river because motorists couldn’t see. Sometimes, northern communities use snowplows to push piles of insects off bridges so people can drive.

Hatches, technically just bugs changing from aquatic nymphs into winged adults, normally occur in sluggish eddies or placid river backwaters. After emerging from the water, the flies cling to tree branches, low bushes, reeds or whatever they can find to dry their new wings before taking flight to mate.

“Most species have only one generation per year, but some will have more than one generation in a year,” Held advised. “Mayflies have two winged stages. The final stage is when they are flying and mating. In their final stage, they don’t feed. They are just there to mate, lay eggs and die, starting the cycle over again.”

With little defense against fish, birds, reptiles, and numerous other things ready to eat them, adult flies swarm in vast numbers to overwhelm predators so that some individuals survive long enough to mate and lay eggs in the water. Mayflies belong to the insect order Ephemeroptera, which means, “lasting only a day.”

Some live or dead flies inevitably fall into the water and float on the surface. When such copious amounts of free protein suddenly enter the food chain, it kicks off a major feeding frenzy that attracts every fish in the area. Anyone who happens upon a hatch could load a boat with bluegills and other panfish in a short time.

“When a hatch occurs, it attracts a lot of fish because insects provide them with so much protein,” Held explained. “When there are so many bugs on the water, fish get in a frenzy-type behavior. It would be like throwing out fish pellets in a place where people feed the fish every day in the same spot. Fish will go for anything that hits the water. When fish get like that, someone could throw a twig on the water and the fish will go for it.” 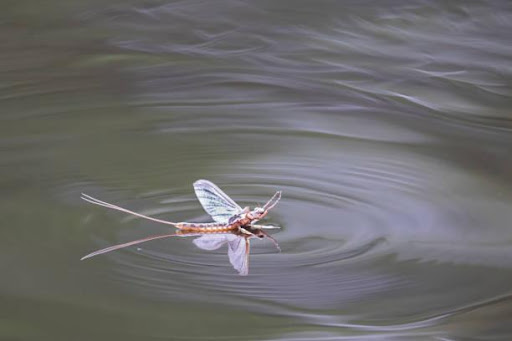 One hot summer afternoon, my fishing partner and I noticed significant activity beneath several low bushes overhanging the water along a cypress-lined stretch of shoreline. Insects completely covered every bush and tree limb. Beneath the limbs, the water boiled in a section about 10 yards long as if a million piranhas attacked a bleeding capybara. We immediately whipped out our fly rods.

Unfortunately, a roaring wind made stopping to fish the honey hole impossible without an anchor or trolling motor. In addition, the relic 12-foot aluminum boat leaked so badly that we had to bail it with a gallon milk jug about every 30 minutes just to stay afloat. Fortunately, the wind blew parallel to the bank where we wanted to fish.

I cranked the ancient 6-horsepower outboard and headed upwind while my friend bailed the boat. We stopped far enough upwind so that we could get our fly gear ready for a quick drift. By “quick drift,” I mean the brutal wind hurtled us past the bushes nearly as fast as the old motor could push us!

As we shot past the strike zone, we each furiously made a cast or two, hoping we didn’t snag on anything. If the bug hit the honey hole, a big bluegill immediately blasted it. About the time we went past the honey hole, the boat needed bailing again. We bailed the boat dry, or at least what passed for dry in something that resembled a noodle strainer, and hoped the engine would crank. Fortunately, it never failed us. We ran the outboard past the bug-laden bushes again, repeating this effort many times that afternoon until we grew tired of catching fish.

Anglers never know exactly when or where a major hatch might erupt. Different mayfly species hatch at different times. In South Alabama, hatches might occur anytime from late March through early November with the peak lasting from late June to mid-September. Fishermen lucky enough to stumble upon a bug hatch in progress could find fast, incredible action. When mayflies hit the water, everything hurries to grab its share of the bounty. 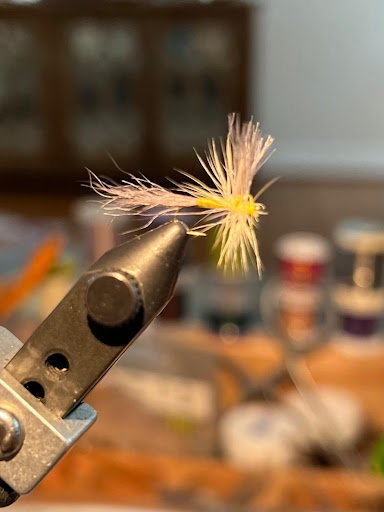 For the most fun, fish small floating poppers on light fly tackle. Floating insect imitations made of cork, foam, wood or plastic, often adorned with feathers and rubber “legs,” make excellent panfish enticements and come in many color combinations. Some creations resemble crickets, grasshoppers or other creatures that bluegills love to eat.

When fish get in a feeding frenzy, lure color or selection doesn’t matter as much as placement. Toss a temptation as close to the fly-laden bushes as possible without snagging. If the popper hits the hot zone, something should grab it quickly. If it falls outside the hot zone, don’t waste time. Make another cast. If the frenzy dies down, shake the bushes to make more flies fall into the water and reignite the frenzy. Or look for another swarm hatching nearby.

Near a good hatch, panfish enthusiasts can also fish crickets under a bobber. They can also run small crankbaits or jigs through the ruckus. Many anglers wake beetle spinners just below the surface. Bass anglers can also benefit from a mayfly hatch. Some bass eat the small bugs, but larger bass usually gather under or just outside of a hatch area waiting to snatch a stuffed and lazy bluegill. 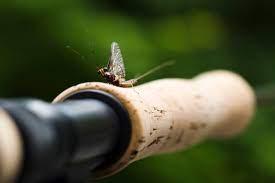 A mayfly hatch can erupt on any freshwater system at most any time. When it does occur, word usually circulates fast. So have your light fly rod rigged and ready to go.