Speaking of contraries, see how the brook
In that white wave runs counter to itself.
It is from that in water we were from
Long, long before we were from any creature.
Here we, in our impatience of the steps,
Get back to the beginning of beginnings . . .

Sometimes when I think I finally might have made some single small step as a writer, I read a passage like the one above from Robert Frost and realize just how small and insipid my own words still are as I am swept ever onward in this stream of life that constantly seems to be flowing “counter to itself.” 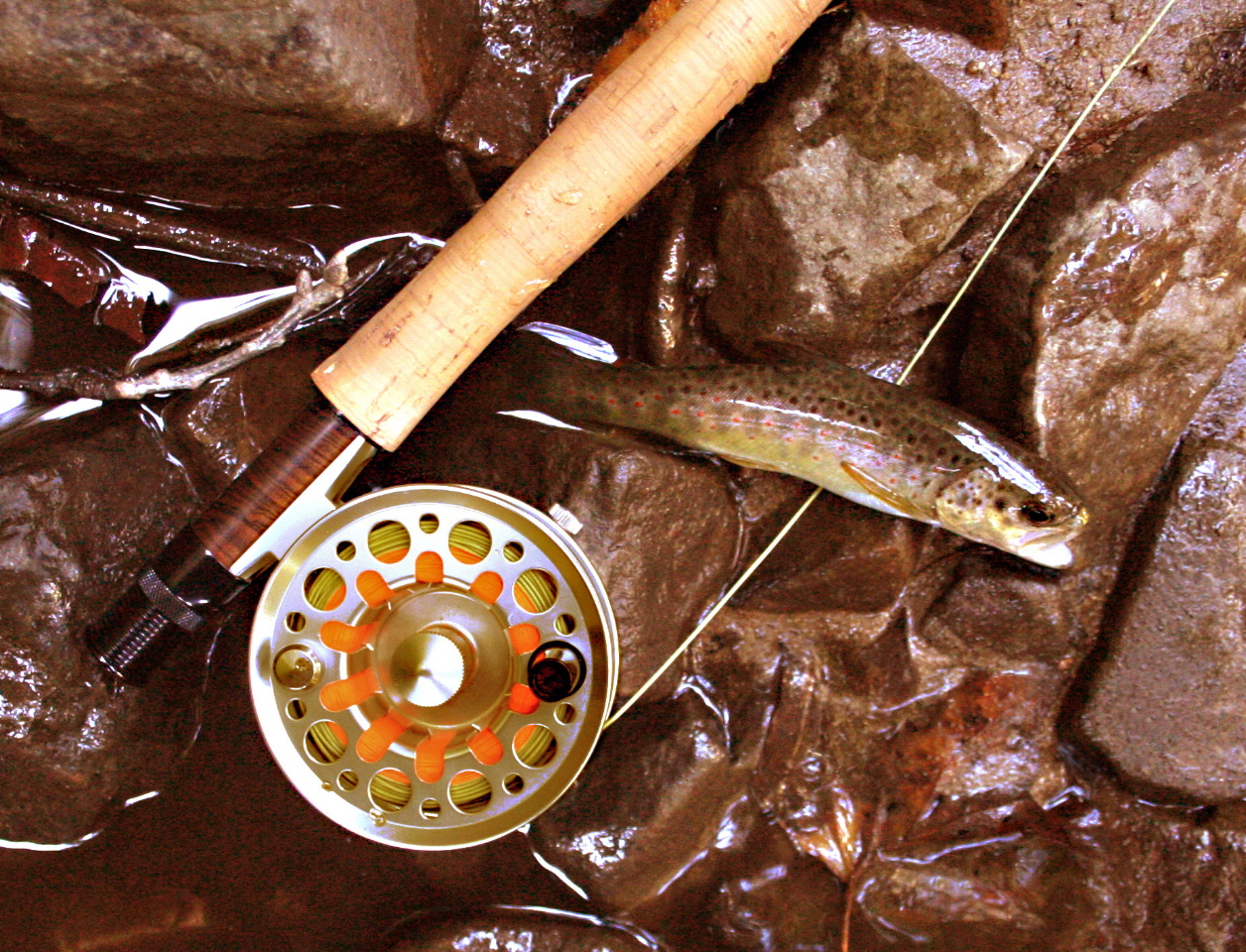 I had a fine ol’ time yesterday evening social distancing alone with my fly rod high in the mountains above home, eventually hiking back out by moonlight. And this morning when I downloaded the photo of that beautiful little brown trout I caught just before the sun slipped past the upper rim of the cliff face 300 feet above me, I was nearly overcome by its timeless beauty.

Some of my bass fishing friends will probably laugh when I show them the photo, and they might even refer to that little trout as “bait.” But I think I’d rather catch an eight-inch eyeful like this on a petite seven-foot wisp of bamboo than the biggest largemouth ever hauled lipped and flopping aboard some souped-up bass boat out on Boone Lake.

She struck the tiny dry fly like a rattler, fought me to a draw, and when I returned her to the stream after making sure she was still pert and sassy, she dove straight for the deepest, darkest part of the run. And I just stood there grinning like a kid in denim as I remembered catching another trout very much like her with my father over 50 years ago from beneath that same gnarly old hemlock that still hovers over the bend in the creek not a dozen yards downstream.

Tonight, those first few formative years of trout fishing lie buried deep in a relentlessly receding past that is becoming evermore remote and difficult to retrieve. 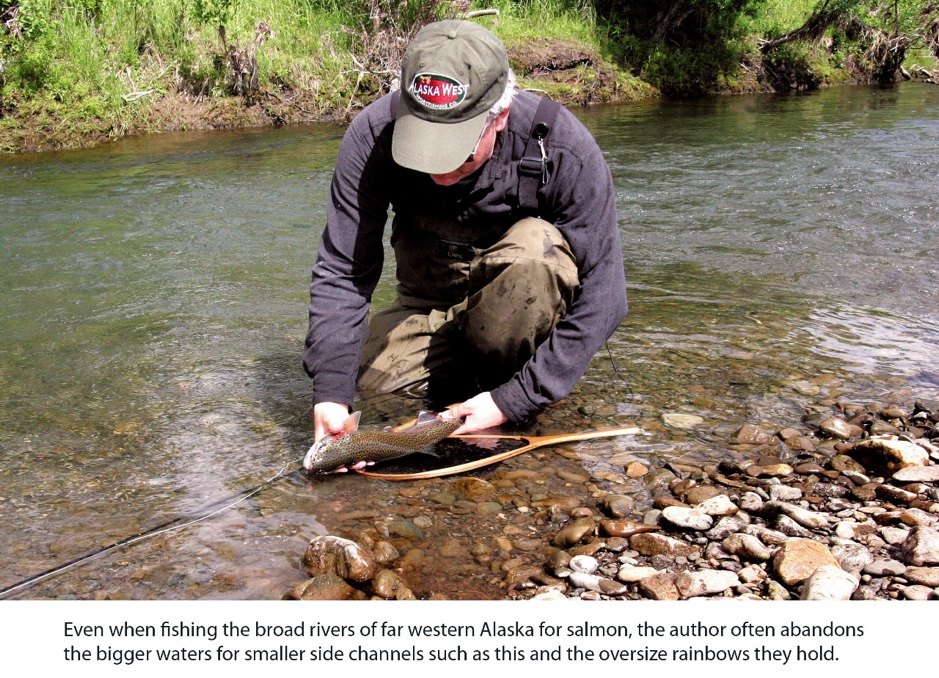 Since that time, fly fishing for trout on small creeks and streams has embedded itself as my absolute favorite kind of fishing. Even on the great salmon rivers that flow into the Bering Sea in far western Alaska, I find myself drawn to the much narrower side channels where the comparatively smaller leopard rainbow trout often set up shop. Then I set my 8- and 9-weight fly rods aside and take up the old 6-weight Fenwick, or even the little six-piece 4-weight travel rod that has accompanied me for so many thousands of miles tucked away in my backpack or carry-on bag with its perfectly matched Tibor reel, and I forget about those oversize Chinook and Coho salmon who prowl the big rivers that feed these narrow side channels as I lose myself among the alders and willows where only I and the brown bears go.

Those back in camp have a hard time understanding why someone who has come so far to pursue these big ocean-grown salmon would forgo their company to fish for such relatively smaller quarry. But fishermen like my father or my brothers or a couple of close friends require no explanation—fact is, they would probably question my character and credentials as a trout fisherman were I to have passed the opportunity while it was there before me.

LOOKING BACK ACROSS A LIFETIME of loving smaller waters, I know perfectly well where it all began—along those brooks and streams and rivulets the likes of which can define a person’s life forever, whether from your first tentative adventures with your dad or all alone as a child, until the time eventually comes to fish those hallowed waters yet again, either in body or in spirit. 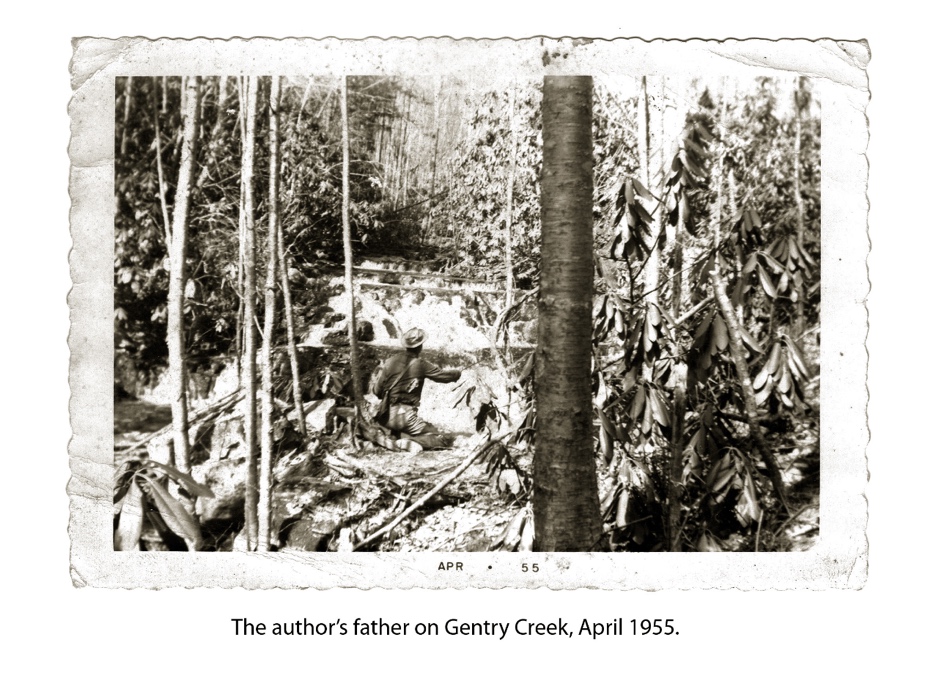 Roaring Fork, Clear Fork, Wolf Creek and Gentry.
Little Tumblin’, the Upper Ford, Doe Creek and the Clinch.
Laurel Fork, the Brazos, Schnittle’s and the headwaters of the Rio Grande.
Intimate little creeks with such telling names as Willow, Poso, Beaver Dam and Lynn Camp Prong would one day follow, as would those fertile feeder streams of Lakes Michigan, Huron and Superior.

The small streams and great rivers of Canada, Alaska and Patagonia would, on first reflection, seem to be the crown jewels for someone who has invested a lifetime with a fly rod exploring the planet from top to bottom and the spheres of contemplation that accompany them.

But in the end, you find your ultimate fulfillment as a fisherman in returning to those small, high-country trout streams you fished as a child, where the seed of your life’s passion first found fertile ground. For they are the true source of your fly fishing obsession as your memory flows backward in time, like that little white wave running counter to itself in Mr. Frost’s poem.

For the better part of a lifetime a wandering spirit and a handful of flies and fly rods have borne me to the farthest latitudes and the most prolific trout-and-salmon waters I could ever have imagined as a child. But I have spent much of the past couple of years much closer to home, revisiting some of the small mountain streams that have been such an integral part of my life since I was still in low single digits. For it is from these streams and the diminutive trout they hold that my true fly fishing heritage springs.

One of those streams is Laurel Fork.

Dad and I first fished Laurel Fork when we moved from southwestern Virginia to northeastern Tennessee when I was a kid, and yesterday I fished many of the same runs I fished back then.

One particularly memorable run lies far up in the high country at the base of a towering limestone cliff that soars well over 300 feet above an especially challenging bend where the creek makes a major change in direction on its way down the mountain through Frog Level and Dennis Cove to its confluence with the Doe River eight miles below. Simply gaining access to the water at the base of that cliff can be something of a high-wire act, and once in position you must negotiate a narrow subsurface ledge that runs along the underside of the rock face.

I carried my little bamboo fly rod in my right hand as I braced myself against the overhanging cliff. Once in position I stripped out 20 feet of fly line and made an initial exploratory cast into the tail of the run sweeping toward me from the bend upstream. After covering the water next to me, I stripped another few feet of line from the reel and began plying the water directly upstream, carefully easing along the base of the cliff along that underwater ledge. A small, elongated shadow rose curiously but cautiously from the depths and paused an inch or two beneath my #20 elk hair caddis to examine it before slowly lowering itself back into the dark water.

My first instinct was to cast back to the little trout immediately. But I sensed the better strategy might be to give him a few minutes to think about what he might have missed, and I laid my next few casts farther up the inside edge of the run away from him. But nothing showed any interest. And just as I was starting to make another cast back to that suspicious little trout who had refused my first offering, a wandering mayfly slipped from the shadows and into a shaft of sunlight reflecting from the cliff face above.

Satisfied that the trout had now had enough time to think things through, I changed flies from the original #20 caddis to a #16 Light Cahill and sent it out on patrol. As it danced across the darkened water where the trout had refused the first fly, he hammered it.

No subtle rise, no slow inquisitive examination, no refusal, he struck like he’d seen this fly before and then burrowed deep into the current. I struck back, firmly but lightly so as to protect the dainty 7X tippet, then laid my fly rod over to the left to try and steer him away from the submerged brush I could see below us. For a moment he paused to regain his bearings before rocketing upstream to the head of the chute flowing from the pool above. Able to go no farther, he shook his head as mightily as an eight-inch brown trout can, momentarily slashed the surface, and then bore deep once more and tore back downstream in my direction. He halted directly across the creek from me and held deep until the bend in my fly rod overcame his waning strength as he rose to the surface and I drew him to hand.

I laid my fly rod down on the rocks at my feet and laid him next to it and shot a couple of quick photos, then gently eased him into the edge of the flow with his head upstream and held him lightly until he bolted back into the depths.

I fished by sight with my little Cahill until dusk, then switched to a small weighted streamer and fished by memory and feel well into the night. And when I could fish no more, I climbed back to the trail, such as it was, and began my long trek out.

I stepped from the woods and into Frog Level sometime around 10 p.m. with fair Orion rising in the east. The broad open meadow was bathed in light from the big waxing moon hovering 40 degrees above the horizon to the south, and Saturn and Jupiter hung shoulder-to-shoulder high in the western sky. Peering east, dusky Mars sat a few degrees above the distant ridgeline, and the app on my smart phone told me that Uranus and Neptune hovered unseen just off Mars’ left flank. I knew that Venus and Mercury lay somewhere beneath my Earth-bound feet, and only poor abandoned Pluto remained a mystery.

I felt a rightful citizen of the Universe. For a moment I considered spreading my space blanket right there in the middle of the high meadow and spending the night among the Heavens and the soaring ridgelines that surrounded me in all direction, and if the clouds hadn’t begun moving in to obscure the moon and stars I would likely have done just that.

As it was, a thin overcast sweeping in from the north turned the harsh moonlight into a soft, diffuse glow that spread across the nightscape and lit it up with a fine filling glimmer that defined all around in perfect acuity, enabling me to cross the broad meadow with ease and follow the trail and the creek all the way down the mountain as the night became light around me.

A time or two I considered pulling the flashlight from my vest. But I knew that if I did so it would have a desultory effect on the keen night vision that had so gradually grown as darkness fell, and I resisted the temptation.

It was almost midnight when I finally arrived back at the trailhead. I set my fly rod and vest into the back of the car but left my hip waders on as I climbed in behind the wheel and started up the engine.

And when I turned on the headlights to leave, they nearly blinded me.

Signed copies of Michael Altizer’s latest book, RAMBLINGS—TALES FROM THREE HEMISPHERES, can be ordered online from Sporting Classics (along with his two previous books, THE LAST BEST DAY and NINETEEN YEARS TO SUNRISE) at SportingClassicsStore.com—click on “BOOKS.” Or call 1-800-849-1004.

You may also purchase his books here by clicking on the RIVERS AND FEATHERS “BOOKS” page.

The author always welcomes and appreciates your comments, questions, critiques, and input. Please keep in touch at Mike@AltizerJournal.com.