When angler Bernard “Lefty” Kreh died at the age of 93, it caused a ripple that traveled around the world.

I first heard the news from fly fishing friends in Cape Town 13 minutes after it broke. That’s how fast the fly fishing world felt the loss.

Kreh was a Greatest Generation angler, a man who met Castro and Hemingway, who taught celebrities how to cast, who survived Anthrax and who fought at the Battle of the Bulge. 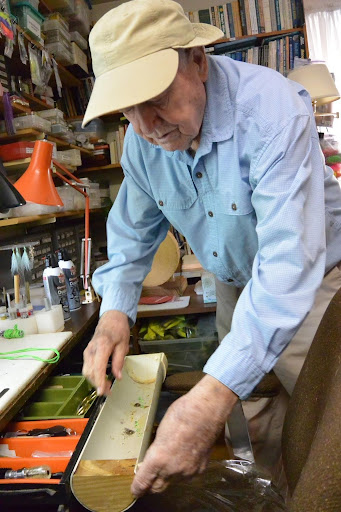 Anyone called “Lefty” is just naturally approachable. At the age of 8, he earned his nickname from neighbors because he excelled at sports, and of course, was left-handed. More than that, his preoccupation with the pragmatic, and less so the poetry, of fly fishing, and his insistence that anyone could learn to do it, brought thousands of acolytes to the sport.

I met Lefty about 15 years ago at one of his workshops. His presence was synonymous with trade shows, seminars and any opportunity to demonstrate casting to those just beginning to get their feet wet. I brought along my nephew, who was 10 at the time, to the North Georgia workshop where we gathered with other Lefty fans in an open field to cast for air. My nephew didn’t understand where the fish were and wondered when we’d get to the fun part.

Over a decade later, I would take my other nephew into a river. There, with the water swirling around our waders, and with my insistence that this was not just important but really cool, the passion was passed on. After that, I took him on a guided trip, so he would quickly associate the activity with actual success. But it starts, like Lefty knew, with an open mind on an open field.

“When I first started doing casting demonstrations, I had to earn acceptance,” Lefty writes in My Life Was This Big. “It was always arms-folded cynicism until I showed them something startling. Well, precisely for situations such as this, I taught myself to cast about sixty or seventy feet of line with my bare hands. No rod, no reel.”

Perhaps this is why he eventually gained an audience for debunking the 10 o’clock-2 o’clock gospel of ages, though acceptance did not come easily. His 1965 article in Outdoor Life sharing his fly-fishing style went over like Dylan going electric, but fast-forward a few decades, and Lefty’s three ingredients to a casting stroke—length, acceleration and direction—come across as cleaner physics than the clock face shorthand.

Lefty was constantly rigging problem-solvers to address little things that bothered him. In his home workshop sits a half-gutter, an ingenious solution for catching the fly-tying art’s tiny bits. When he finished tying a fly, he removed the stopper to sweep away his cuttings. 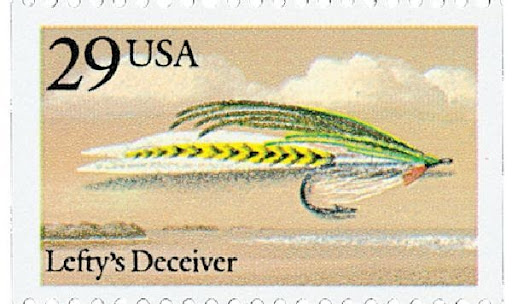 In 1991, The U.S. Postal Service issued a stamp honoring Lefty’s Deceiver, a streamer designed not to twist and foul around the hook during retrieves, a problem Lefty often faced in pursuit of striped bass in the Chesapeake Bay. His advice was unwaveringly practical. He could not waste much time on poetry because he was busy living it. Still, with oft-quoted zingers like “Did you look at your back cast? Because it’s ugly as hell,” it’s assured Lefty knew a good one-liner.

“Ain’t nobody ever gotten a heart attack fishing a trout,” Lefty said more than once. In 2017, he wrote an open letter as he prepared for retirement, aware of his congestive heart failure.

Like my own grandfather, Kreh died surrounded by his family. Both men fought in the Battle of the Bulge—Kreh in the 69th infantry. Heroes, they occupied the same trenches in the Ardennes, a region in southeast Belgium that extends into Luxembourg, Germany and France.

On the day he died, Lefty’s granddaughter Samantha reported his last uttering of a place he called Spirit Springs.

“One thing he kept mumbling was Spirit Springs, over and over,” she said. “When I asked him what or where that is, he simply replied, ‘that’s where I’m going, to fishing heaven, to Spirit Springs.’”

For a man who largely ignored the poetry of “the quiet sport” in favor of the bare essentials, Lefty’s life serves as a guide to Spirit Springs – a heavenly, trout-filled stream that lies somewhere out there, as real and navigable as any destination. Just follow Lefty.