Roderick Haig-Brown is one of fly fishing literature’s touchstone figures, and his work has become requisite reading for those who wish to partake of the pure essence of the artform.

For decades I have been particularly drawn to his book “FISHERMAN’S WINTER” — the narrative of his pioneering 1951 odyssey that took him and his readers to the great trout waters of Chile and Argentina, and eventually into the heart of Patagonia itself.

My own tattered copy of this wonderful book was already well traveled by the time I bore it away on my long journey south to fish some of those very same waters, and it featured a lovely painting by John Robert White on its cover entitled “The Meadow Water—Rio Malleo.” Some say the Malleo is the quintessential fly fishing destination in the world, flowing from Lake Tromen and, above that, the snows of the elegantly proportioned 12,293-foot volcano Lanín.

Some say it flows from Heaven itself.

Of all the trout waters I had ever dreamed of fishing, the Rio Malleo was top of the list. And now as the big Airbus lifted from the darkened runway in Atlanta and banked south into the midnight sky, I was on my way to do just that.

From touchdown in Buenos Aries the next morning to the flight into San Martin de los Andes two days later, I knew I would soon be experiencing some of the rivers and landscapes that Haig-Brown had described so vividly in his text, and that my own great adventure would eventually lead me to the Rio Malleo itself. But that I might actually be able to find the location depicted in Bob White’s painting on the cover of Haig-Brown’s book was nearly beyond comprehension.

After investing the better part of early April fishing the famed Collón Curá and Chimehuin, I arrived at the Olsen family’s Estancia Loncoluan and the Hosteria San Huberto with my longtime friend Robert McClenagan from here in Tennessee, along with lifetime Patagonian residents Adrian Cataldi and Mark Lewis to fish the Rio Malleo.

We were greeted by San Huberto’s gracious host Ronnie Olsen, and at dinner that evening I showed him and Mark the watercolor on the cover of Haig-Brown’s book and asked if they might be able to identify its location.

“I’m not certain,” Mark replied, and he handed the book to Ronnie. There followed an extended conversation in the most elegant Spanish I had ever heard, and Ronnie said he just might know where it was.

“I think it is a run we call ‘La Isla’,” he explained. “But this is an older painting, and the vegetation there is now much different. The artist is an old friend of our family, so let me give him a call.” And with that, he stood and left the table.

A few minutes later he returned with a big smile. “I called Bob White up in the United States, and he confirmed it. It is La Isla. We’ll take you there.”

The next morning we awoke to perfect weather and light breezes. But later as we took a break from fishing and paused for lunch, I casually commented to Adrian how little wind there was, and his somber reply was, “Ohhh, no . . . we do not mention his name.” I soon understood, for as the evening drew to a close Mark cast a wary glance westward to the soaring volcano Lanín and said, “I don’t like the looks of that sky at all.”

Still, we had plenty of time to get to La Isla in the days ahead—or so I thought—and as we returned to the lodge that evening we were filled with optimism and good cheer. But when I stepped outside after dinner to view the stars, the wind was beginning to build.

I know wind. I have heard its sanguine song and virulent cry in gathering dawn and black of night. I have experienced both its wrath and its mercy, from Hatteras Point to the Great Canadian Shield to the Baltic and Bering Seas. I have felt its sting in sleet-laden gales and air so cold and cutting that it claws at your face and burns your lungs. But this wind had a voice unlike any I had ever heard—not so much a threat as a guarantee. And when again I stepped outside an hour before first light there was a different tenor to the air and the stars were nowhere to be seen.

Dawn broke angry and bitter cold, as though it resented the good fortune we’d been proffered the day before. Lanín stood wholly obscured somewhere to the west among the churning clouds that swirled around its massive bulk, and the ridges towering around us were shrouded in mist and snow as Ronnie and Robert and I made our way up the valley of the Malleo, bound for La Isla as Ronnie had promised.

When we reached the river, the wind was in full song, with rain and sleet and driven snow peppering us relentlessly. But in spite of it all, I immediately recognized the storybook setting. Fully understanding just how much it meant to me to actually set foot in this legendary location, they left me here alone.

Willow and Chacay now grew from the end of the steep cut bank, but the stratified layers of compacted volcanic soil were just as they appeared in Bob White’s painting. The channel flowing past the point and beneath the trees was unmistakable as I moved into place and made my first cast. On my third drift a 14-inch rainbow darted from beneath the overhanging foliage and took the fly. Two more of his brethren fell for the same tiny Blue Wing Olive before a much larger brown trout inhaled it.

Twice the big brown leapt before nosing deep, catching the current and taking me 70 yards downstream where I was finally able to work him to the net and release him. 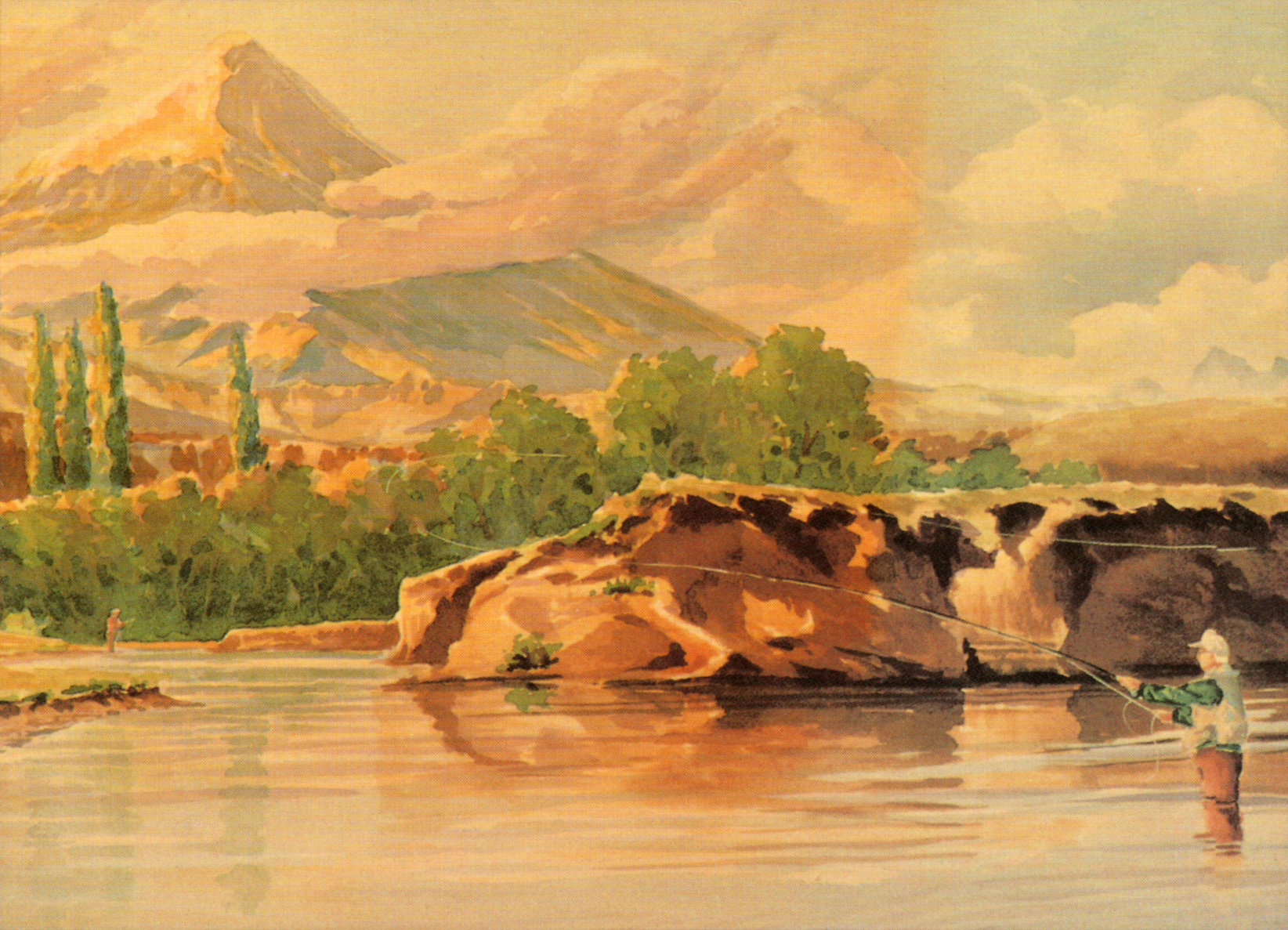 For decades I had gazed at that fisherman, the thought that someday I might stand in the same place as him never occurring to me. I looked upward into the low grey sky, totally immersed in the present and knowing full well where shy Lanín stood hidden in the clouds to the west. A small group of Magellan geese worked along the base of the high volcanic bank far downstream, while a line of Lombardy poplars swayed like dancers in the wind. And I simply fished—for hours working my way up and down this venerable stretch of water for a hundred yards or more in both directions, making cast after cast and catching trout after trout until La Isla was my own.

Ronnie and Robert returned at dusk to fetch me, and two days later we did it all again—I alone and utterly content as fair La Isla shared her deepest, most intimate secrets while coy Lanín remained reserved and hidden in the seething sky above.

I never saw her face again.

I am now back home in Tennessee. It’s well past midnight, the house is quiet, the hearth is warm, and my old cat Hannah lies purring atop the ancient Indian blanket that covers my legs. And as I gaze at this tattered book by Roderick Haig-Brown and the Bob White watercolor that graces its cover, I can still feel the Rio Malleo flowing around my hips and legs.

I can still taste the sweet wind caressing my face as I slip a cast deep beneath those overhanging willows at the head of La Isla, and I watch as the current catches my fly and carries it down to where that old brown trout again sips it from the surface.

Again I see him leap into the icy air when I strike, then feel him tear away as I work downstream and finally ease my net beneath him. And I can taste the dark water that flows beneath the edge of that steep bank of volcanic soil where he returned after I released him and then looked to the west—still searching the churning sky for Lanín, who so shyly refused to reveal herself.

But it didn’t matter then, and it doesn’t matter now.

For I knew she was there—just as I knew I was here in the middle of this lovely Bob White watercolor that tonight has a much deeper and more intrinsic meaning than anything I could ever have imagined before.

Bob and Lisa White annually host a week of fly fishing on the fabled Rio Malleo from the Olsen family’s Hosteria San Huberto. For information about the week and joining the group, please visit the travel section of their website, bobwhitestudio.com.

If you’d like to review some of the classic sporting art that Bob produces, please visit their website, bobwhitestudio.com. Be sure to contact Bob or Lisa with any questions you might have at Bob@bobwhitestudio.com.

The author appreciates your comments, questions, critiques, and input. Please keep in touch at Mike@AltizerJournal.com.

Copies of Michael Altizer’s books, THE LAST BEST DAY, NINETEEN YEARS TO SUNRISE, and of course RAMBLINGS—TALES FROM THREE HEMISPHERES which features his own adventures in Patagonia can be ordered online at SportingClassicsStore.com. 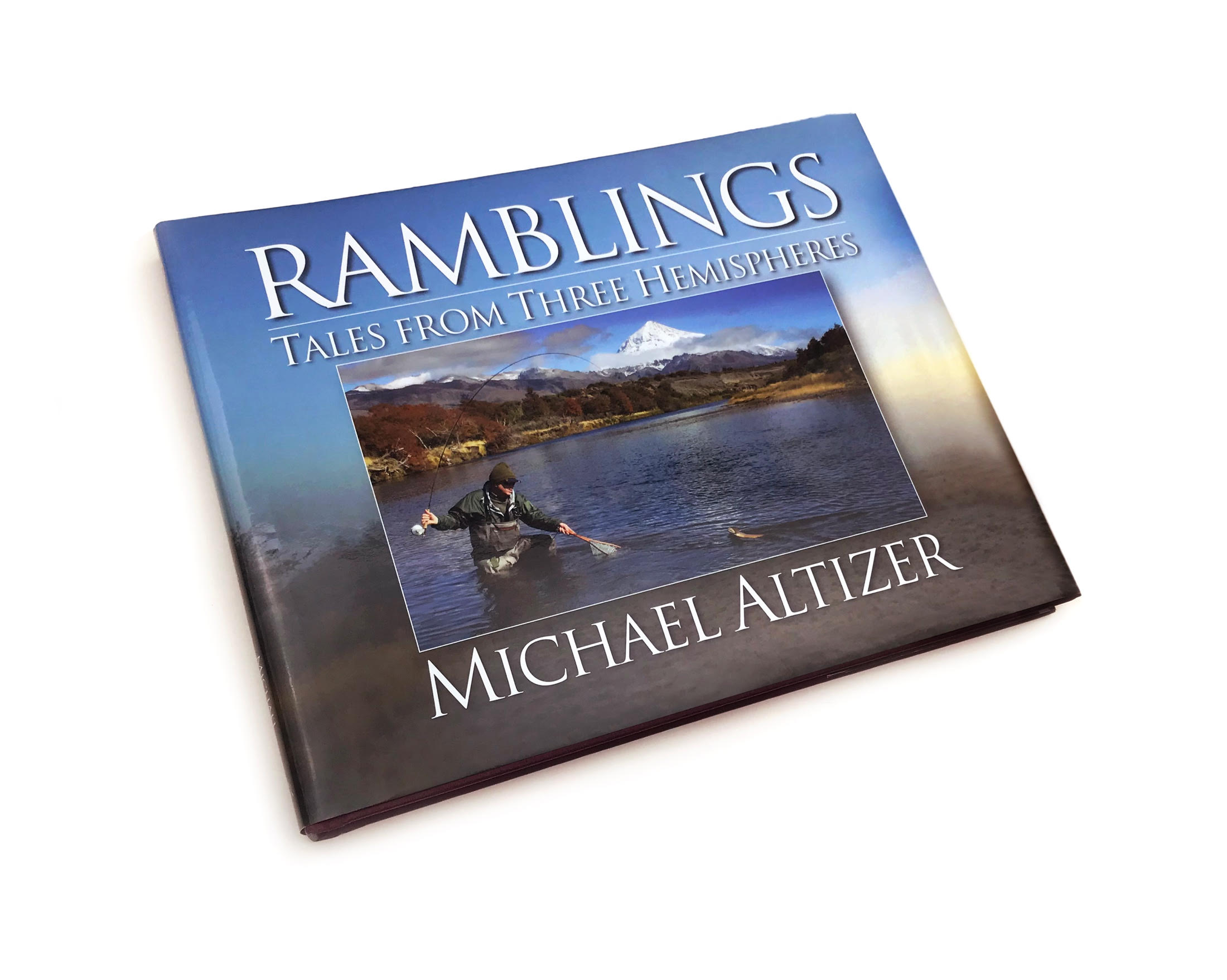 RAMBLINGS—TALES FROM THREE HEMISPHERES features the author’s own adventures in Patagonia.