In Need of Bad Habits

Some of my so-called friends have been suggesting I might want to give up a few bad habits in my old age. I argue my habits are those normally associated with those who splash through cold water in search of finned creatures. Perhaps I’m most aligned to Mark Twain’s train of thought when he said, “Nothing so needs reforming as other people’s habits.”

Yet old age isn’t creeping up on me so much as it’s running headlong in my general direction. Or to paraphrase some early blues lyrics, I’m getting old enough to remember when the Dead Sea was sick.

And don’t get me wrong. I do plan to wear out several more pairs of waders and break another fly rod or two, so long as it’s done on big fish I eventually land. And whenever I buy a new rod, I opt for one with a long warranty in hope that my own warranty doesn’t expire first. Fishermen tend to be optimists.

If I’m honest, a stretch for any fisherman, my bad habits probably start with my diet. I confess to falling squarely in the camp of carnivores. As proof, let me say that I have never once in my life thought to myself, “Man, I could really go for some lettuce about now.” 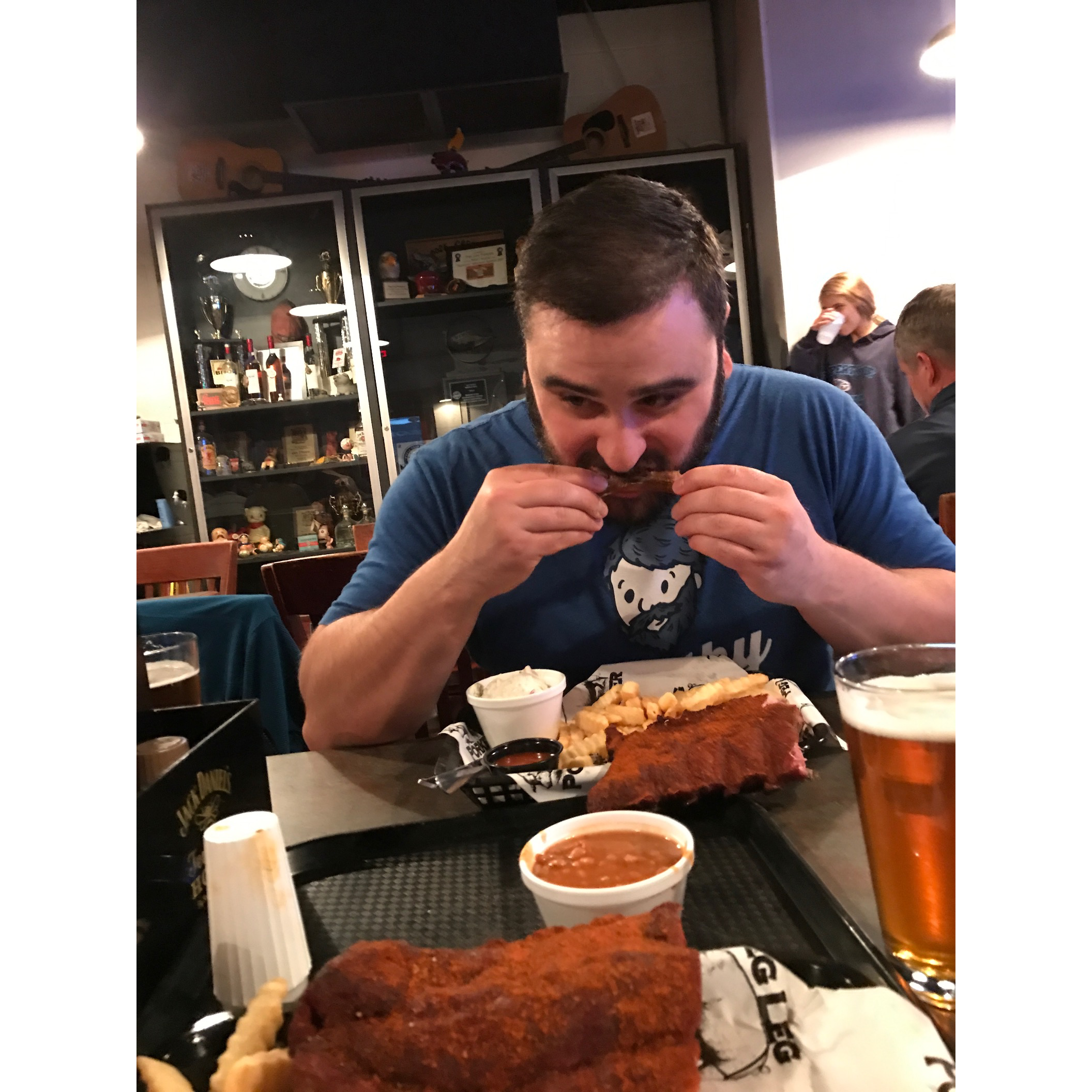 One of my bad habits is barbecue.

And any whiff of meat over hickory smoke will cause my truck to swerve. I find it conspiratorial that so many barbecue joints lie between me and a trout stream. In fact, my favorite stream runs behind the back porch of one such establishment so I can fish within smelling range of pork on their smoker.

I suspect that pulled pork, brisket, and ribs are only marginally bad for me, but they always come with some form of fried potato, beans with bacon, and cobbler. All to be washed down with tea so sweet the straw curls. Any angler who won’t stop for such a meal after a day on the water probably fishes with bait.

Fishermen also tend to be suckers for good chili. At least I am. But what I want to know is when did chili move from being a soup to a condiment? Now I can get chili on a baked potato, on a burger or hot dog, and even on my fries. If they ever start putting chili on pulled pork I’ll probably have to get one meal in the restaurant and another to go. I’m sure that whenever I get a physical, they check my blood for hot peppers and hickory smoke. But my doctor never mentions it knowing I’d quit having physicals before I stop some things.

As I think about it, the problem with giving up bad habits is that you are not sure what it actually buys you. For instance, does swearing off strong drink get you another day on the water or another season? We’re making deals only knowing the price and nothing of what we are purchasing.

Take craft beer for instance. Fishermen often gravitate towards it, preferring it to water to quench their thirst. I’ve thought that might be because fishermen know what fish do in the water. It’s not like they can crawl up in the woods to answer nature’s call and then flop back into the river afterwards. So, who wants to drink that?

I know I’m not alone simply by cruising through a craft beer store and looking at all the labels with fish themes. Two Hearted Ale’s name surely came from a Hemingway fishing story, Sculpin appeals to streamer anglers, and SweetWater has a jumping trout on the label. Trout Unlimited even has craft brewery members like Big Trout Brewing Company, a name that’s not remotely trying to sneak up on fishermen.

Maybe I’m not weak-minded so much as the subject of good marketing. Somehow, I get a warm feeling thinking that I might still be somebody’s target market.

Besides, if I shun such beverages and replace them with something equally adequate in quenching my thirst on a hot afternoon when I’m in need of shade and a drink with condensation dripping down the outside, bottled water doesn’t quite fill the bill. That would go better with lettuce.

As I get older, I’m starting to appreciate the story about the fisherman who turned a hundred and had a young reporter come out to interview him on his birthday.

With her first question, she asked, “What’s the secret to long life?”

The fisherman thought for a minute and replied, “Don’t smoke, don’t drink, and don’t go out carousing.”

To which she followed up, “And if you do all those things you will live a long life?”

“No,” the fisherman admitted with a smile, “but it will seem long.”

So, I take his point to heart. My goal is longevity with moderation.

Perhaps an old outdoor writer from the 1800s, George Washington Sears, summed up my philosophy while talking about his.

“I smoke and take an occasional glass of wine and never lie about my hunting and fishing exploits more than the occasion seems to demand.”

In my case, I’ve avoided the smoking but compensated with extra lying. After all, I’m an outdoor writer and a fisherman.

So, I’m in search of some bad habits that can be easily discarded when the need arises. It’s not that I don’t have any bad habits, it’s just that the ones I have I’m somewhat attached to.

Jim Mize admits to bad habits in moderation. You can find his award-winning books of humor and nostalgia on Amazon or get autographed copies at www.acreektricklesthroughit.com. You can also purchase Jim’s books on Amazon through our BOOKS page.