A man is never too young to become an old trout fisherman.

His name is Gabriel Matthew, and he has not yet turned five. But he’s been a bona fide trout fisherman for the past 91 years.

There was simply no choice.

For he’s the son and grandson of the two finest trout fishermen who ever lived, my brother and father, and he carries the trout-fishing gene. 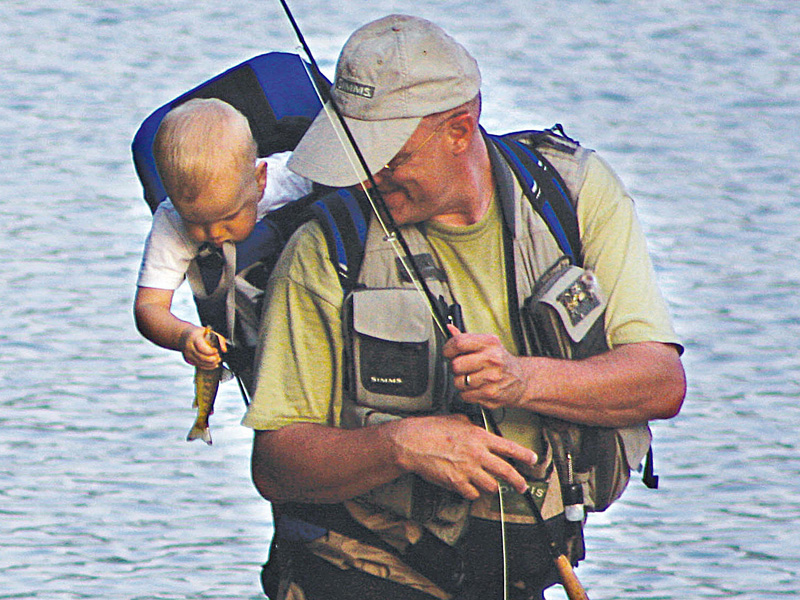 At eight months old, Gabe had already learned to watch the dry fly on the river’s surface while riding in his Dad’s backpack.

He started fishing with his dad when he was eight months old, riding high in a backpack with his face anchored over Alan’s shoulder, instinctively watching as the dry fly danced down the current. And whenever Alan caught a trout, Gabe would have to get his eager little hands on it before it was released.

Then last Christmas I realized we had a problem.

For you see, Gabe was the only guy in the Altizer family who didn’t have a fly rod of his own. But this was an easy fix, and when I took the new 7-foot, 10-inch 4-weight to him we had to wake him from his nap and he was cross.

Until he saw his new fly rod.

Oh, don’t think for a moment that he didn’t know exactly what it was. A few minutes later he and Alan and I were out in the front yard, and Gabe was attempting his very first casts. He spent the rest of the winter practicing with it and showing it to people, and then taking it apart and putting it back into its case to carry around and sleep with.

In early March, Alan found him a pair of waders that were sized for little people, along with a fishing vest and big floppy hat.

There was only one place on the Holston where the little guy could wade safely, but it held trout. A number-18 bead-head zebra midge dangled on a 9-foot 5X tapered leader with two feet of 6X tippet was his ticket to bliss. But Gabe broke off two fish before he began to understand the process and gain the necessary touch to hook and bring to net his very first trout—a fat and feisty ten-inch brown. 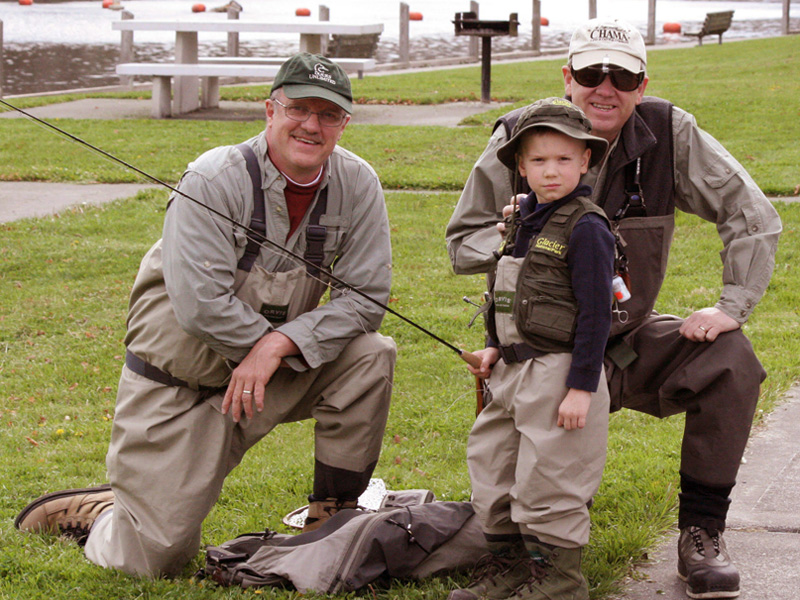 Moments later Alan dialed my number from the river and handed the phone to our new protégé, and there was more excitement in that tiny voice than I had heard from anyone in years as he told me about his big “brown fish” —and especially about all its beautiful red spots.

By early April the three of us were having a grand ol’ time up on the Holston and over on the Watauga.

He sings as he fishes, and often I sing with him. He has learned to hold onto the nearest big guy’s waders with one hand in faster water and to anchor the butt of the rod into his little chest and stomach and keep his rod tip up when playing a fish.

More importantly, he has a good, foundational start on the evolution of his fly-fishing ethics and insists on counting only those trout that he has caught all on his own, and not the ones that Alan and I hook first and then let him play. And on this particular afternoon, the little guy schooled dear old Dad and Uncle Mike in the fine art of trout fishing. 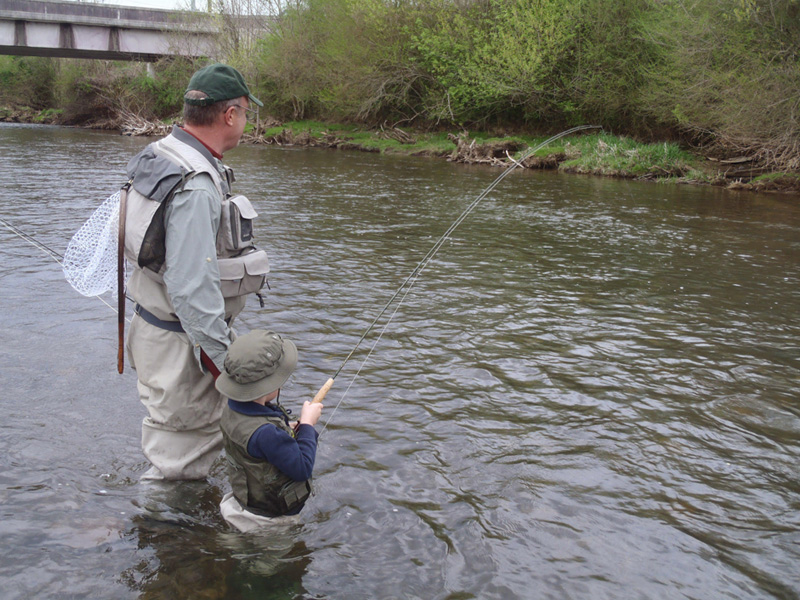 Gabe at four years old playing a nice brown trout he has hooked all on his own.

We had started our day up on the Holston on the back side of Osceola Island. But there was a cold front bearing down, and the fish were sullen and somewhat tight-lipped. So we decided to change venues and head over to the Watauga above the Hunter Bridge, where the water wasn’t too deep and swift for Gabe to wade safely.

I hooked the first trout, a pretty little rainbow, and let our apprentice play it and bring it to net. Then Gabe caught a rainbow all on his own and Alan caught a small brown trout. Gradually the wind picked up, and just as Gabe and I changed songs, his line came tight.

He pulled back with both hands, but only hard enough to set the hook. As the trout took off, Gabe reached for the handle of his reel. But Alan was right there beside him and explained that when a fish pulls this hard, you should let go of the handle and let it run against the drag. Gabe urgently explained to him that he would eventually need to reel it in, and when the trout showed signs of tiring, he began doing just that. 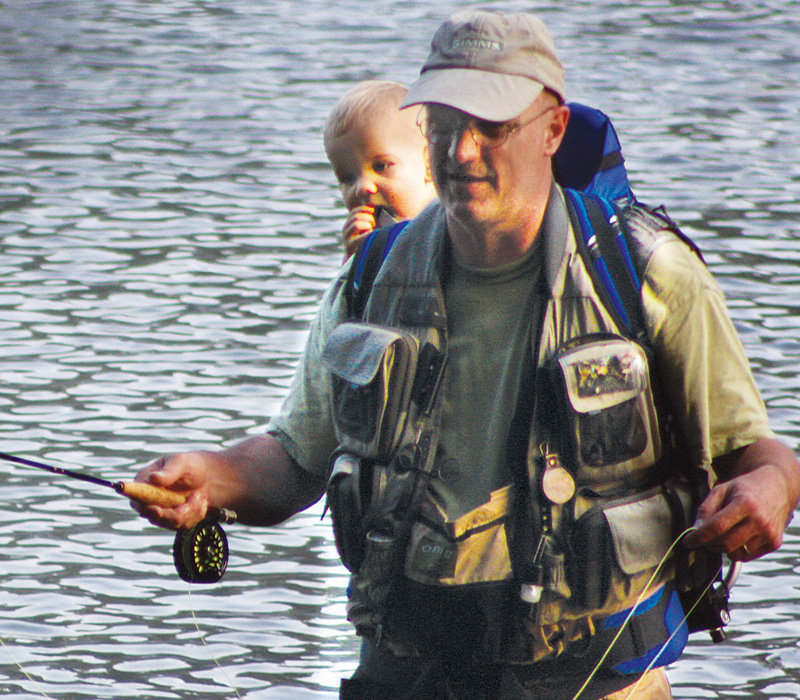 Now usually by this point in a fight one of us would have seen the fish. But this trout stayed deep, and we quickly realized that it was larger than normal.

It was Alan who first saw that it was a big brown. He moved a few feet downstream with his net, still feeding Gabe advice about when to reel and when to let go of the handle. The little man was working hard trying to keep his rod tip up, and I could see that his arms and shoulders were beginning to tire. My first instinct was to help him—but even more, I wanted him to know that in the end, he had played this fish all on his own, win or lose.

So there he stood, alone and butt-deep in the current, with his dad just a few yards below him and me a few feet above. Finally Alan was able to get the fish into his net, and he let out a war-whoop.

I wish I could have seen Gabe’s face. It was the biggest trout he’d caught so far, at least 14 or 15 inches, and when he finally turned to look at me, his grin seemed even bigger than the fish. But when he saw all those beautiful red spots, he nearly came unglued.

The sound of his little voice spread across the water like the joy spreading across his face. He tried to set his fly rod down, but then realized he was still standing out in the river, so I offered to hold it for him. 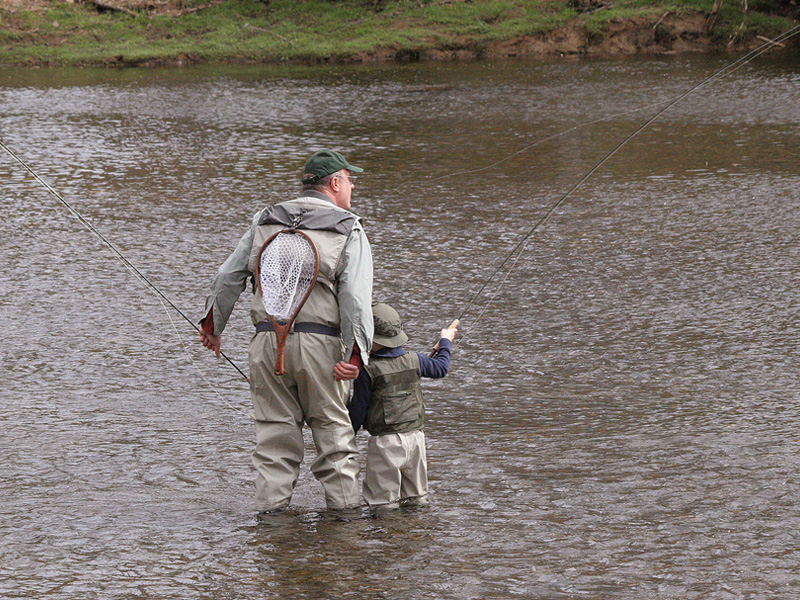 Gabe working on his casting as his father. watches

“I wanna let him go,” he insisted.

“We will,” Alan assured him as he eased the hook from the point of the trout’s upper lip.

And when Alan had made sure that the fish was upright and in good shape, Gabe reached down and lifted his brown trout from the bottom of the release net and plunked it back into the current.

Only then did I look up at my brother and see a grin even bigger than his son’s.

On our way out that evening Alan and I rode in the front seat still rattling excitedly, and Gabe slumped in his car seat behind us, trying hard to stay awake until he could get back home and tell his Mama about his big beautiful brown trout and all its red spots, and show her the video that Uncle Mike had shot as he caught and released it.

Meanwhile, I’m certain his grandfather was regaling everyone in Heaven about that trout his grandson had just caught—as though they hadn’t heard already. And by the way, did I mention it had red spots!!

Michael Altizer’s books, RAMBLINGS—TALES FROM THREE HEMISPHERES, NINETEEN YEARS TO SUNRISE, and THE LAST BEST DAY and can be ordered online from Sporting Classics at SportingClassicsStore.com—click on “BOOKS.” Or call 1-800-849-1004.

The author always welcomes and appreciates your comments, questions, critiques and input. Please keep in touch at Mike@AltizerJournal.com.