It was late July, and it was hot. Sweaty, gritty, South Carolina summer kind of hot. Along with the seasonal discomfort, my wife, Kathy, had been spending too much time dealing with work. And I was working more than I cared to, which actually wasn’t very much. Meanwhile Duke, The Super Dog, was still recovering from a serious case of anemia that nearly killed him. We all needed a vacation.

I found “a cute cabin” online. Upon arrival the following week, my wife confirmed it was indeed ‘cute’ as advertised. But more important, the place overlooked a trout stream. Dang, what a coincidence! 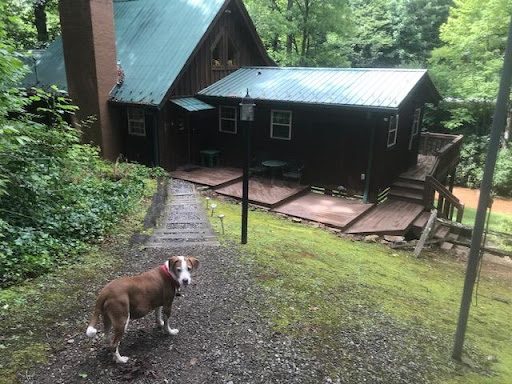 Duke waits impatiently for us to unload the truck.

Located near Dillsboro and Sylva in the hills of western North Carolina, the house was stylishly rustic. Cedar and pine throughout, with a deck overlooking state-stocked Greens Creek. Plus, the elevation provided slightly lower temperatures and less humidity then home. Sign me up!

Along with the usual suitcase stuffers – clothes, toiletries, beauty stuff, Merlot, etcetera, I tossed my Redington 7’6” 2-weight in the backseat along with a batch of flies.

It was a three-hour drive from home in Rock Hill to the mountains of the other Carolina. The high temperature around Sylva would be in the mid- 80s. We’ d been sweating in the upper-90’s back home. Up in the foothills of the Blue Ridge Mountains, the temperatures were expected to tumble into the low 70s by evening. Ideal for gliding in a rocker, sipping a cold beer, and listening to the gurgling stream below.

When we arrived on Friday afternoon, Greens Creek was a muddy torrent thanks to recent rainstorms. I wasn’t too crazy about trying to fish, but Duke was enamored with the whole set-up, and insisted on wading in and quenching his thirst with the dirty brown water.

Duke actually prefers the taste of water that has been flavor-enhanced with assorted unwholesome additives. Be it a flowing creek or a mud puddle, he’ll happily imbibe until I yell at him, “Duke, quit drinking that #&@!”

But I wasn’t too worried as long as the creek didn’t wash him downstream. After all, Duke was on vacation too. He could drink his dark water, and I’d join him with a cool, dark Guinness or two.

Generally, when people meet Duke, they are impressed with his looks, his attitude and his appetite. “What a beautiful dog. What breed is he?” many ask. And like most shelter dogs, his lineage is a mystery. But along with his good looks, his ancestry has handed down a good nose, a wiry protective streak, and an above-average I.Q.

He also has a special talent for worming his fifty pounds of dog into your lap for a nap. Hard to say ‘no.’

That first evening, Kathy, Duke and I took the pick-up to Dillsboro about 20 minutes away. We had to find a pet-friendly restaurant, which turned out to be pretty simple. It’s a very dog-friendly town and we found our way to Haywood Smoke House. Our trio left there pleasingly plumper.

The next morning the cloudy creek had regained clarity and looked far more fishable and inviting. But its level was now fairly shallow and narrow – seven to ten feet across. Not much elbow room for the fish or me.

I wondered if the creek did indeed hold trout. But the fellow in charge of the rental texted me and said there were plenty of trout. In fact, he’d caught quite a few himself. And vacation rental agents don’t lie.

I had an array of dry and wet flies I’d picked up at Chattooga River Fly Shop near Seneca, South Carolina. Karl, the owner, provided a selection he felt would be effective in these mountain streams.

After a quick breakfast, Kathy hung out on the balcony reading, while Duke and I patrolled the stream banks for signs of trout. We walked upstream a quarter mile to where Greens Creek ran through a pasture. Having seen no signs of life but a cow, we headed back down, casting this and that, hither and yon. The overhanging limbs of surrounding brush and trees provided the only action for me as I often found my line intricately woven into their branches.

Duke meantime, kept me company, walking along the bank and occasionally wading into the shallows for a drink. 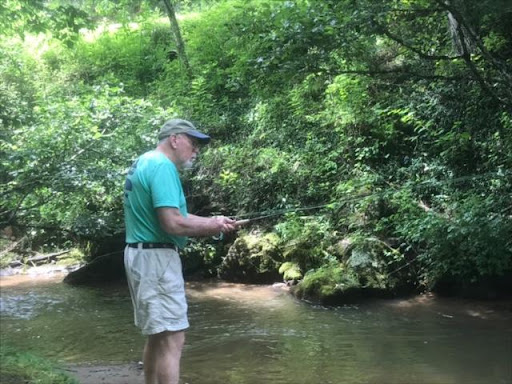 I tossed the gnat upstream again, letting it drift drag-free over the hole beneath the web of limbs.

After an hour of tossing a few different flies with no results, I dug out a Size 12 Griffith Gnat. Almost directly in front of the house, there was a rising fish in a slight hole barely 10 inches deep.

“My God, there really are fish in here!” I whispered to Duke. Or maybe I shouted. Can’t remember.

Whether it was a trout, a little bream or a horny-head chub, remained to be seen. But the swirl was very trout-like.

Slurp! A fish grabbed the bug and held on to it long enough for me to pressure the hook into its upper lip. We were soon in a battle which, thanks to my 200-pound weight advantage, quickly ended at my feet. 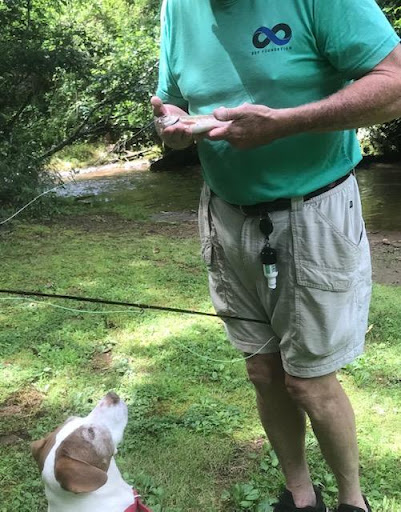 Duke eyeballs the rainbow only a few feet from his nose.

Duke was intrigued by the flopping little rainbow in my hands. Kathy was close by and offered to take a few quick photos so I could return the fish to the safety of the creek. 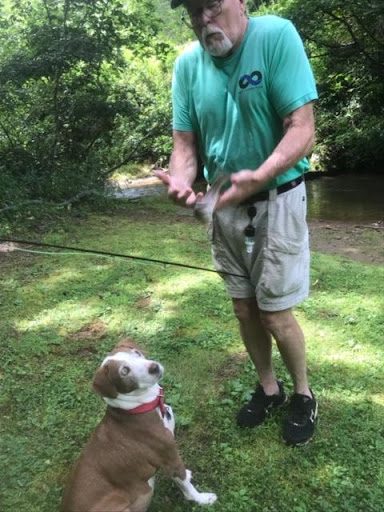 But as fish often do, this one flipped and slipped from my grip. This mishap was not lost on Duke as he quickly went into predator mode and zeroed in on the freshly caught trout.

I managed to reach the flopping fish before Duke, and gently released it back into the rocky shallows. This did not deter Duke. He kept an eye on the fish and followed it downstream several yards before giving up the chase.

After a few more 8- to 9-inch rainbows were caught and released, we took a ride through the country, winding up back in Dillsboro for dinner. 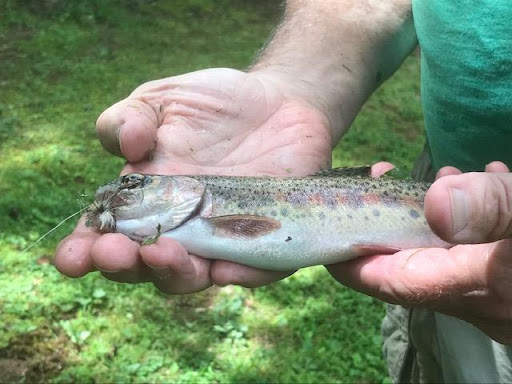 A feisty rainbow with a lip-full of Griffith Gnat.

Later that evening, we all sat on the balcony listening to the gentle music of wind and water. My wife attracts mosquitoes, so she was soon back inside in front of the TV. They don’t really bother me or Duke. I guess we don’t taste as good. Fine by me.

Before going home the following day, we decided to squeeze in a few ‘touristy’ activities. That included shopping for locally made honey and chocolate, handmade mountain artifacts, and Cherokee Indian crafts. We also swung by Harrah’s Cherokee Casino, but never turned the engine off. It’s a lot cheaper if you don’t go inside.

We will do that again, I hope. The three of us will slip away to where the weather is tolerable, the cabin is ‘cute,’ the fish are biting, and Duke has muddy water to drink. What could be better? 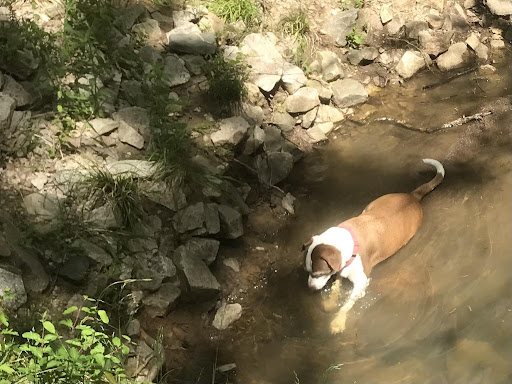