The Potomac stretches nearly 400 miles from Pennsylvania to the Chesapeake Bay.

The Potomac River has been called “America’s River,” and with good reason. The nation was birthed on its banks, and its waters remain the lifeblood of the nation’s capital to this day. Named after the Indians who lived on its banks, the Potomac flows through parts of Pennsylvania, West Virginia, Maryland, Virginia, and Washington, DC. It has been a source of food and entertainment for over 200 years and supplies 486 million gallons of drinking water a day to the residents of the Washington metropolitan area. The Potomac stretches nearly 400 miles before it reaches its final destination: the Chesapeake Bay.

The Potomac changes dramatically on its journey to the Chesapeake Bay. In fact, anglers might consider it two different rivers–the upper and lower Potomac. The upper Potomac is a bit easier to wade in some locations but also serves as a hot spot for tubers. Anglers on the upper Potomac catch smallmouth bass, red-eyed bass, bluegill, walleye, and the occasional rainbow trout. Rapids and falls, including tourist-friendly Harper’s Ferry, West Virginia, mark this portion of the river. There is also good water in Maryland near Point of Rocks, though admittedly its deep here and using a guide with a boat is the best option.

The lower Potomac, often referred to as the tidal Potomac, is a completely different ballgame. The water slows here, exceeds 80 feet in depth in some places, and can be multiple miles wide. The river becomes brackish and inherits tidal floods because of its proximity to the Chesapeake Bay. Here is where you are most likely to catch stripers in the spring and fall. Not a striper fan? Then try your hand at the Potomac largemouth bass, which can easily exceed 8 pounds. In late March and through April shad migrate into this river by the tens of thousands and are wonderful to catch on a fly rod. I’ve also seen gar greater than 3 feet in length in the lower Potomac. And if you’re fishing slow and deep enough, you might be ambushed by a catfish. Last but not least, Snakeheads have now become all the rage and these fish fight like crazy and are great to eat. If the lower Potomac intrigues you, you can even rent a flat bottomed boat or canoe from Fletcher’s Boat House, an established anglers’ hangout since the 1850s.

The flies you choose to fish for the Potomac depends on what species you’re targeting. For bass and other warm water fish, try streamers like Kraft’s Kreelex. This brightly colored fly mimics a baitfish, and works on a variety of species including trout. For shad you want to scale down to smaller sizes, (think #6 and smaller) and the more colorful the better. My favorite pattern for shad is a Tommy’s Torpedo in chartreuse and pink with a copper colored tail. Named after Tommy Mattioli, a well-known fly tyer in Richmond, Virginia, these flies also work well on ring perch.

Another good fly is Dubiel’s Pop-N-Cork, a pattern originally created for North Carolina redfish by guide Gary Dubiel owner of Spec Fever Guide Service. Though the fly was created for drum, no one thought to tell the local stripers which seem to like it as well. Stripers often go for large poppers when they are surface feeding in the morning and tossing poppers when fish are breaking the surface is a lot of fun.

Few people know fishing on the Potomac River better than William Heresniak. As the owner of Eastern Trophies Fly Fishing he’s guided and floated on the Potomac hundreds of time in the last few years.

“Most of my clients want to focus on aggressive smallies when fishing here,” says Heresniak. “As a result, I often thrown patterns that imitate Cicada’s like Kraft’s Boga Bugs. These flies can be a challenge to cast if you’re not used to them, but they are deadly effective on all manner of surface feeding fish, especially later in the year when shade becomes a factor.” 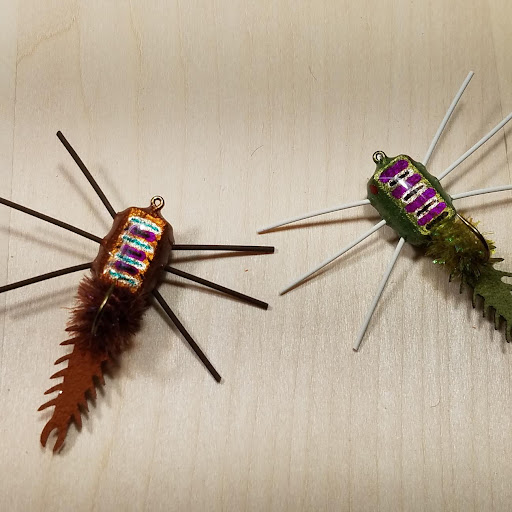 Surface water poppers like these created by Chuck Kraft can be very effective when fished near the shoreline. Photo by William H.

When fishing the Potomac for smallmouth bass, Clouser Minnows are always a good bet as well. A variety of stripers, shad and ring perch live in this river, so you need to be prepared for nearly anything. The shad and ring perch will often short strike because their mouths are sometimes too small to get around the gap of the hook. If you feel yourself getting strikes but not hooking up, drop down a size. If you still aren’t having much luck, look for moving water. This is almost always where you’ll locate the shad (in the spring), and below them the stripers. Trust me, when that striper hits you won’t wonder if you had a strike, and you’ll be glad you brought a good reel.

One more thing anglers fishing the lower Potomac need to know. This river has serious flows, and deadly undercurrents. You shouldn’t come here without proper shoes with good soles that grip wet or moss-covered rocks, and a proper flotation device is also a good idea.

I also highly recommend a wading staff if you are at all unsure of your footing. A cool new combination tool on the market is Catch Cam Nets. This product can be used like a wading a staff, it also offers the user the option of mounting a camera like a go-pro so you can record your catch. Catch Cam Nets allow you to wade holding the net part, while using the opposing end of the handle like a wading stick. Oh, and did I mention they come with a built in ruler so you can measure your catch too?

To get the latest details or day-to-day conditions on the river there are a handful of fly shops near the lower Potomac which can give you some insight. The closest by far is District Angling in Arlington, VA. The owner Richie Farino is a well-respected guide and is as dialed as they come when it comes to the Potomac River. Calling Farino and getting the latest intel on this wonderful river can save you a lot of time. District Angling also provides a wide assortment of flies and other gear that you might need. Other local fly shoos include Orvis Arlington, Orvis Tyson’s Corner, and Orvis Leesburg. Any of these shops will be glad to help you and some may even provide a lead on guides, which is always a good investment when fishing a new river. 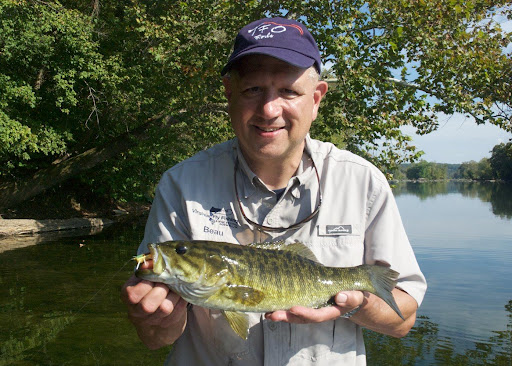 The author with a nice smallie he landed while fishing surface bugs with Eastern Trophy Adventures. Photo courtesy Beau Beasley

If you want to fish the Upper Potomac, be sure to contact Kelly’s White Fly Outfitters. This store is growing by leaps and bounds and Brian Kelly the owner is an excellent guide. He can also help you with accommodations if you’re traveling from out of town and want to fish this river for more than a day or two. I’ve stayed at Kelley’s home which doubles as a B & B and his wife’s muffins are the stuff of legend.

America’s River has a lot to offer today’s angler, from the deep tidal Potomac near Washington D.C. to the area around historic Harper’s Ferry, West Virginia. If bass, stripers, catfish, snakeheads and shad don’t get you excited, head up to the great state of Maryland and tangle with a few hard fighting rainbows. You owe it to yourself to grab your rod and see what you can discover for yourself on America’s River.

Beau Beasley serves as the Director for the Virginia Fly Fishing & Wine Festival and the Texas Fly Fishing & Brew Festival. He is known for his objectivity and in depth research on contentious river bottom ownership claims. His latest book about fly fishing and its positive effects on veterans is schedule to be released this fall.