It’s been more than four years since Lefty Kreh, the great godfather of American fly fishing, passed. It’s time for me to share a couple ‘Fishing with Lefty’ stories. Both are as true as my memory will allow.

About 30 years ago the Backcountry Flyfishing Association was having Lefty come for a weekend seminar. At the time I didn’t know it, but Lefty would fly into town on Friday night, give the seminar on Saturday and Sunday, then leave late Monday afternoon. That way he would have time to fish on Monday morning.

Mel Schubert called me to tell me, “I’m taking Lefty fishing on Monday. Would you like to come with us?”

A few weeks later I found myself in the boat with God, incarnated as Lefty Kreh.

I was intimidated. My plan for the day was simple- keep my mouth shut, my ears open, and don’t do anything stupid. It was a simple enough plan and should have been easy to carry out.

Mel poled. Lefty fished. I sat there, thrilled, following my plan, taking everything in like a hawk. The bite was stinky, but it was a beautiful day.

Around 10 o’clock or so Lefty stopped to rest. It was then I made my mistake. At the time Lefty worked for Sage, and he was using one of their products.

“No. I don’t want to embarrass myself,” I said.

Lefty said, “Don’t be like that. Sage pays me to put that rod in people’s hands. Pick it up and try it.”

Reluctantly, I picked it up. Before I did anything I looked at the leader. There was a wind knot in it. I said nothing and cast the rod a few times. It really was a great piece of equipment. Then I handed it back to the maestro.

He looked at the leader and said, “Johnny, you put a wind knot in my leader.”

Look, it’s right here.” I said, “That was there when I picked up the rod.”

He gave me a hard look and said, “I don’t know if I should believe you or not.”

I said, “Lefty, you can believe what you want but I’m telling you, that was there when I picked up the rod.”

Even God gets wind knots sometimes. I’ve never concerned myself with them overly since then, figuring if Lefty gets them everybody will. I just check the leader periodically and if there’s a knot in there, I take it out or replace the section. It was such a valuable learning experience!

Several years pass, and the fly fishing club books Lefty again. Now I know the drill, so I call him and ask if he wants to fish with me on Monday. He did. We booked the day.

My son Maxx, then eight years old, attended the seminar with me. I got the idea he should come with us and asked the maestro if that was OK. It was.

Monday morning Lefty, Maxx (playing hooky), and I launched the boat. There was a school of big redfish in the Indian River Lagoon at the time. Lefty still had the eight-weight Sage. I went looking for those fish, without success. All morning.

Noon came and went, and we still hadn’t found the fish. Giving up, I cranked the motor and started to run. By divine intervention the school surfaced 100 yards ahead of me. It was an incredible spectacle, hundreds of 20- to 30-pound reds slamming a big school of mullet. I poled Lefty into casting range.

“I’ve never seen this before,” he said.

He had a little bendback tied on, maybe a size 2. The fish, intent on the big mullet, completely ignored it.

“I didn’t bring any big flies,” he lamented.

I got off the tower, dug out my big fly box, and handed it to him. He pulled out a white Deceiver, half a chicken on a 3/0 hook. His hands were shaking as he tied it on.

Ready again, I poled back to the fish. You know, if you go from a little #2 fly to a big, wind-resistant 3/0 fly, your casting stroke will have to slow down. In his excitement, Mr. Kreh forgot this. His backcast was hitting the water. He was swearing at himself. “I can’t cast this fly with this rod. This is a ten-weight fly!” 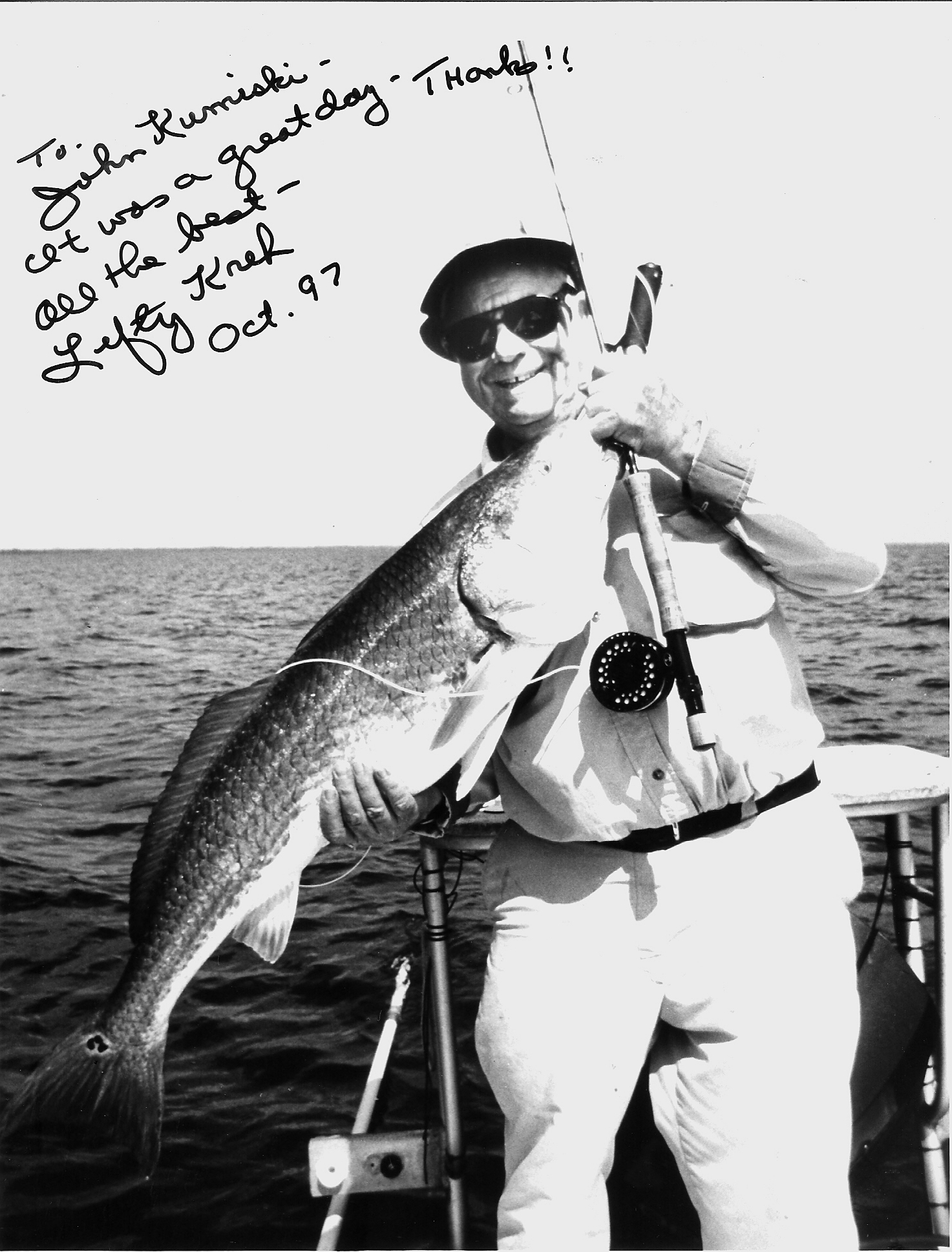 I thought to myself, “I could cast that fly with that rod. This is Lefty Kreh. Oh my God, Lefty has buck fever!”

He got over it quickly. The fly soon shot out into the fish, and one nailed it immediately. I eventually pulled it into the boat. Lefty was thrilled. At 28 pounds it was the biggest he’d ever gotten on fly!

This was also a valuable learning experience for me. I was a fishing guide. If Lefty Kreh gets buck fever, there’s a good chance anyone else I ever have in my boat might get buck fever too.

This is why we go fishing. If you didn’t get that rush of adrenaline, you’d be better off bowling or playing golf.

Lefty taught lots of people lots about fly fishing. The two most valuable lessons he taught me were not to worry overly about wind knots, or about my fishermen getting buck fever. The lessons came while I was out, fishing with Lefty.

Thank you so much for so much, Lefty!