I had booked a trip to fish in Montana the day Yellowstone National Park closed due to flooding. My ability to schedule trips to coincide with natural disasters is something I normally keep secret. Otherwise, guides would refuse to take me or at least charge extra for hazard insurance.

Usually my trips coincide with hurricanes when I’m trying to catch redfish. I was scheduled to fish north of Charleston, SC a few years ago when they got two feet of rain and roads closed. Not long after, I booked a trip to the Florida Gulf and was chased inland by another hurricane. I thought Montana might be immune to hurricanes, but I wasn’t willing to bet on it with me there.

On this trip, I was staying in Kalispell and a few days before the trip my guide called to inform me that all the rivers were blown out and we would be fishing a small lake in the rain. As we talked further, I concluded that four hours in a monsoon might be more fun than eight hours, so we cut the trip back to half a day. I thought he might have heard about my luck with weather but he didn’t mention it. At least, he didn’t raise my rate.

I had booked the trip through True Water Fly Shop in Kalispell. When I showed up I met my guide, Rod Stultz. Rod knew what we were up against with the weather and we were the first boat on the water. We fished Rogers Lake, a small, shallow lake with cutthroat trout and grayling. The edges and upper end have aquatic vegetation sprouting, though not so thick that it’s a problem. 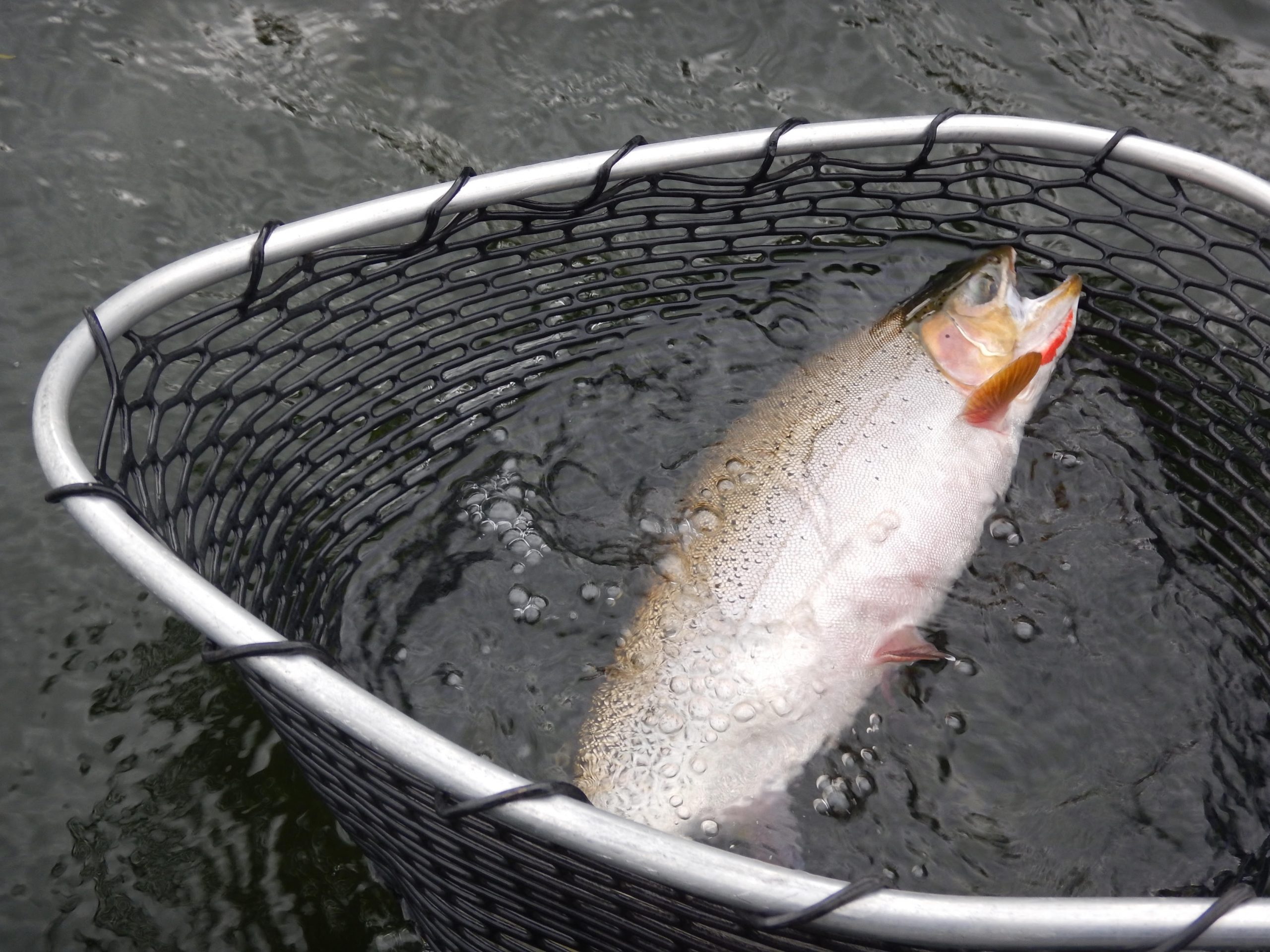 After a short trip rowing us across the lake, Rod handed me a rod (pun intended) and on my first cast I caught a nice cuttie, probably in the 16-17-inch range. It’s been a couple months so I’m betting the fish has grown to 18 inches by now so let’s go with that.

My second cast connected with a grayling and we were quickly feeling pretty good about the day.

To the north, Glacier National Park was getting snow. To the south, Yellowstone was getting rain on top of snow that had accumulated during the winter and spring, releasing too much moisture all at once. Bridges were being blown out and houses were washing into rivers.

On our small lake, we were getting typical Montana June weather: temperatures in the upper forties, vertical rain, horizontal rain, a pause and then more rain. Or at least, typical weather for me. I kept waiting for a redfish bite and thought about tying on a crab imitation.

In between fish, we talked baseball. As it turned out, Rod’s son played college baseball and I watched a lot of baseball, or at least had it on while I tied flies or messed with the Lab. Baseball is one of those sports where every exciting play gets shown twice, so it’s the perfect game to watch without all the time watching. 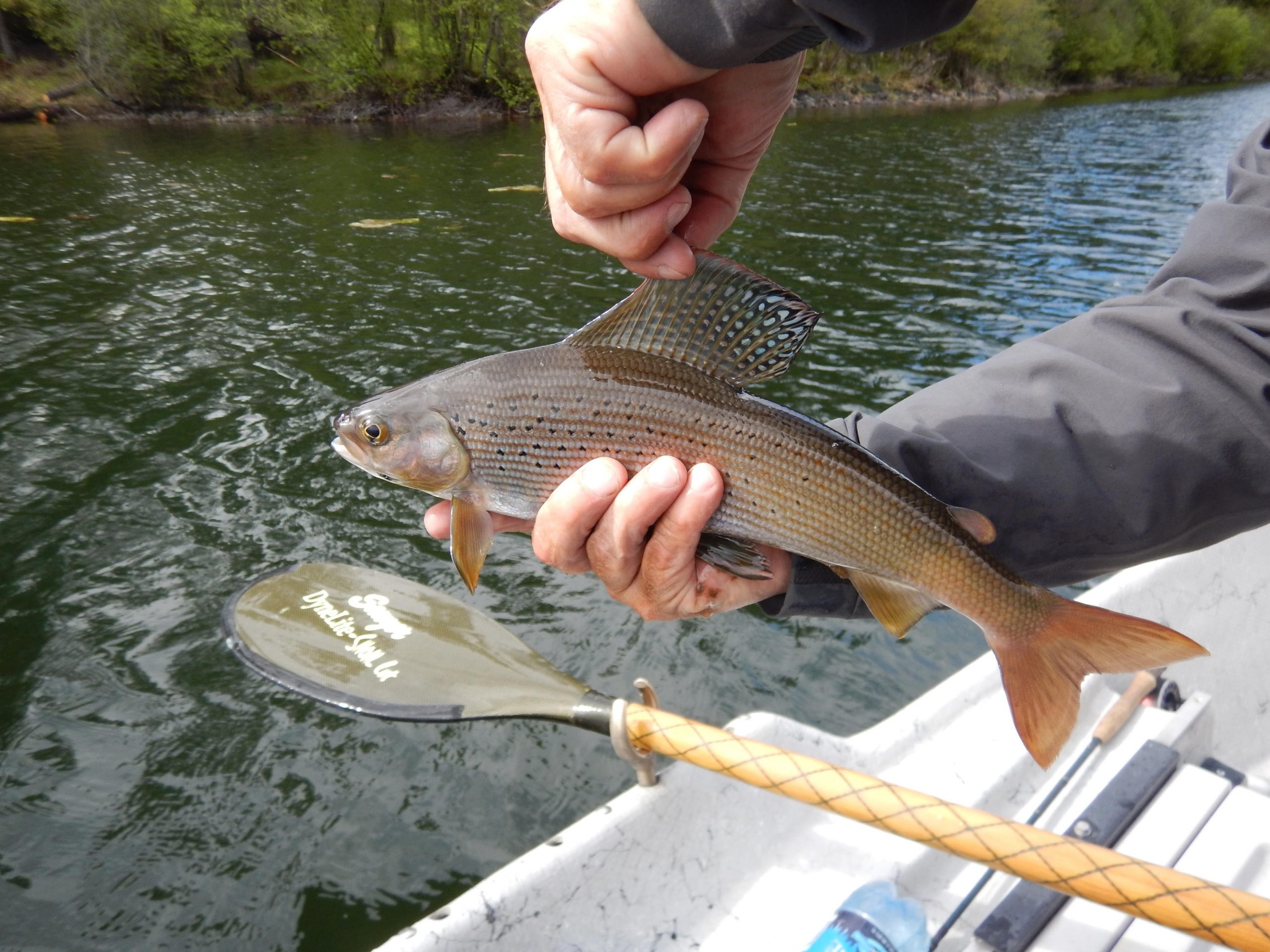 Rod shows off the dorsal fin grayling are famous for

My rod was rigged with a small beadhead Prince nymph under a strike indicator. The fly had a bit of purple flash and was tied on a jig hook.

Fishing in a lake is different in that the food usually stays still and the fish roam. In streams, it’s the opposite where fish wait for food to come to them. So, for most of the morning I watched my indicator without moving the nymph. I caught one grayling trolling my fly behind the boat when we moved once, but it was the exception.

While my indicator bounced gently on the ripples, I watched the abundant wildlife around the lake. Ducks and geese swam the edges and a loon surfaced next to my strike indicator. An eagle perched on a limb high above the lake, watching us as if he expected us to toss him a fish. We didn’t. 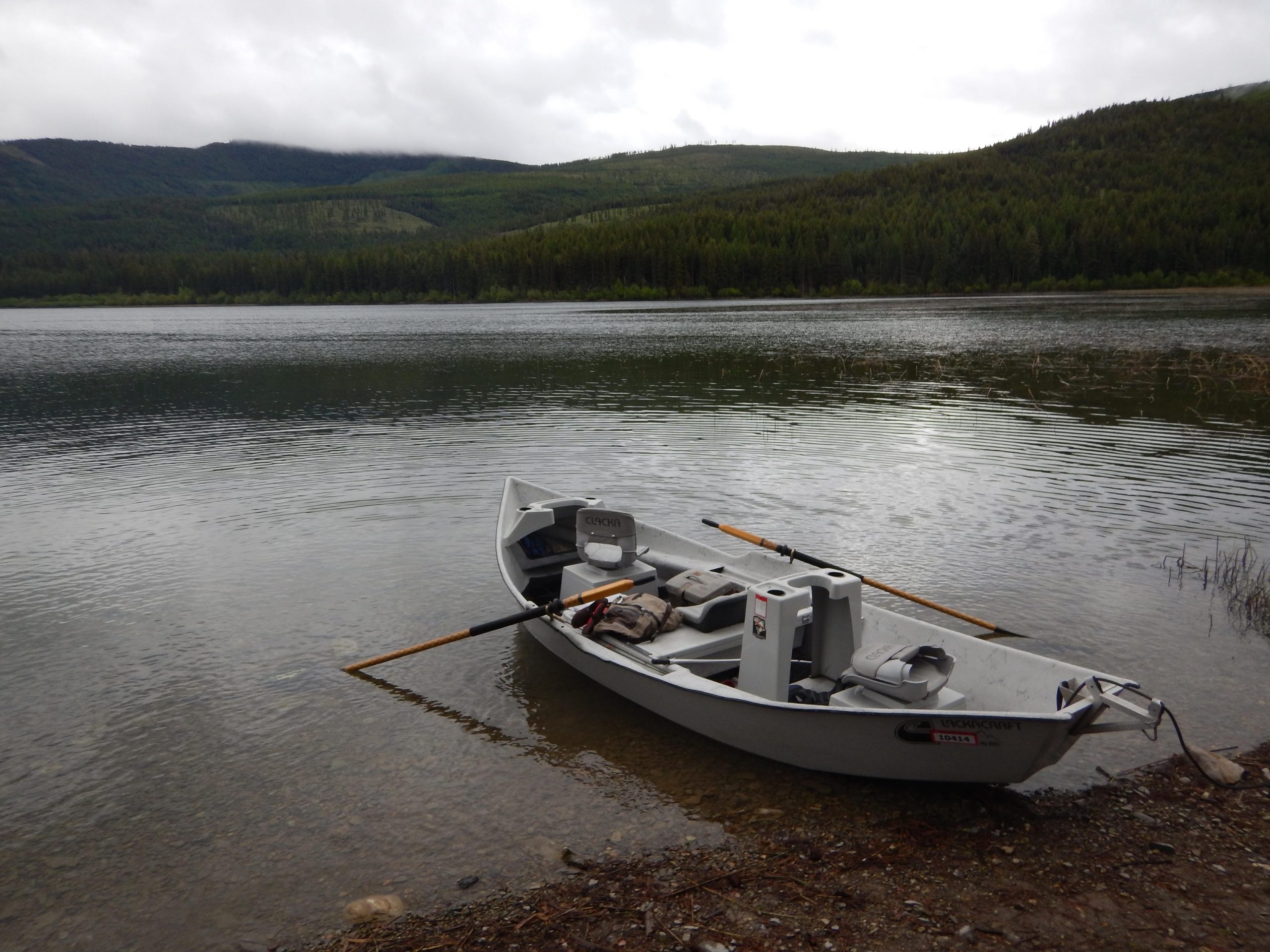 Our boat on Rogers Lake

As the morning came to an end, we moved back to the spot where we had started and I caught a second cutthroat, this one a bit smaller than the first. It was a nice bookend to a steady catch of grayling.

As we parted, I decided not to tell Rod about my ability to attract bad weather; I might want to go out with him again.

His ability to attract bad weather is one reason Jim often finds himself fishing alone. You can find his award-winning books on Amazon or purchase autographed copies at: www.acreektricklesthroughit.com.

Jim Mizes’ book, “Fishing with Beanpole” can be purchased through Amazon by clicking on the RiversandFeathers book link below.