Truth be told I’ve never found the high tide view of Cape Cod Bay to be very inspiring. It can be fun to watch the water roll all the way to the horizon from a Widow’s Walk at False Dawn. On those mornings you’ll feel a salty breeze and watch the stunning colors like vibrant yellows, bold oranges, and soft greens creep into the sky. Even the most hard-boiled person waxes on about the stunning beauty.

I don’t notice that stuff when I’m on my skiff. Instead, my attention is focused on locating the No Wake Zone buoy. When I see the floating tubular form, I push the throttle forward and come up on plane.

Lobster buoys torn from pots in a storm wind up decorating trees or buildings. Lobstermen use specific colors to easily identify their pots.

I leave a wake that shakes the colorful buoys marking shellfish grants loaded with oysters, cherrystones and littlenecks. I scan the waterfront homes behind them; over yonder is the Elephant House once owned by the man who introduced bananas to the United States, Lorenzo Dow Baker. To the west is the Herring River that usually holds fish on a dropping tide. Due South of the Herring River is Great Island. It was a popular spot in the 1700’s for Higgins Tavern sat in the island’s sway. The pirate Black Sam Bellamy seduced and scorned a bar maid named Goody Hallet. Their ragged history lingers in the shadows of terns, cormorants, and seagulls. I can feel it even today.

Our tides run big up here and depending on the moon they’re plus-or-minus 12 feet. At slack high you’d never guess you’re in flats country, but you are. Opportunity knocks, and blessed are those who wait, for in four hours the flats will come alive. Boring, featureless water transitions into a rich texture of white sand flats, guzzles, and bars. If you’re not familiar with the changing view bring along a compass. Lower water looks so different from high water that you’ll need a bearing to get back home.

June is that most magical month of the year. It’s time for sight-fishing for striped bass and bluefish in water not much deeper than your knees. The winds have settled down, and they are no longer waffling northerly winds. Instead, they blow consistently from the west/southwest bringing warmer water temperatures and sand eels. Word spreads like wildfire when the bait and the fish arrive. We’re more than ready for a change. 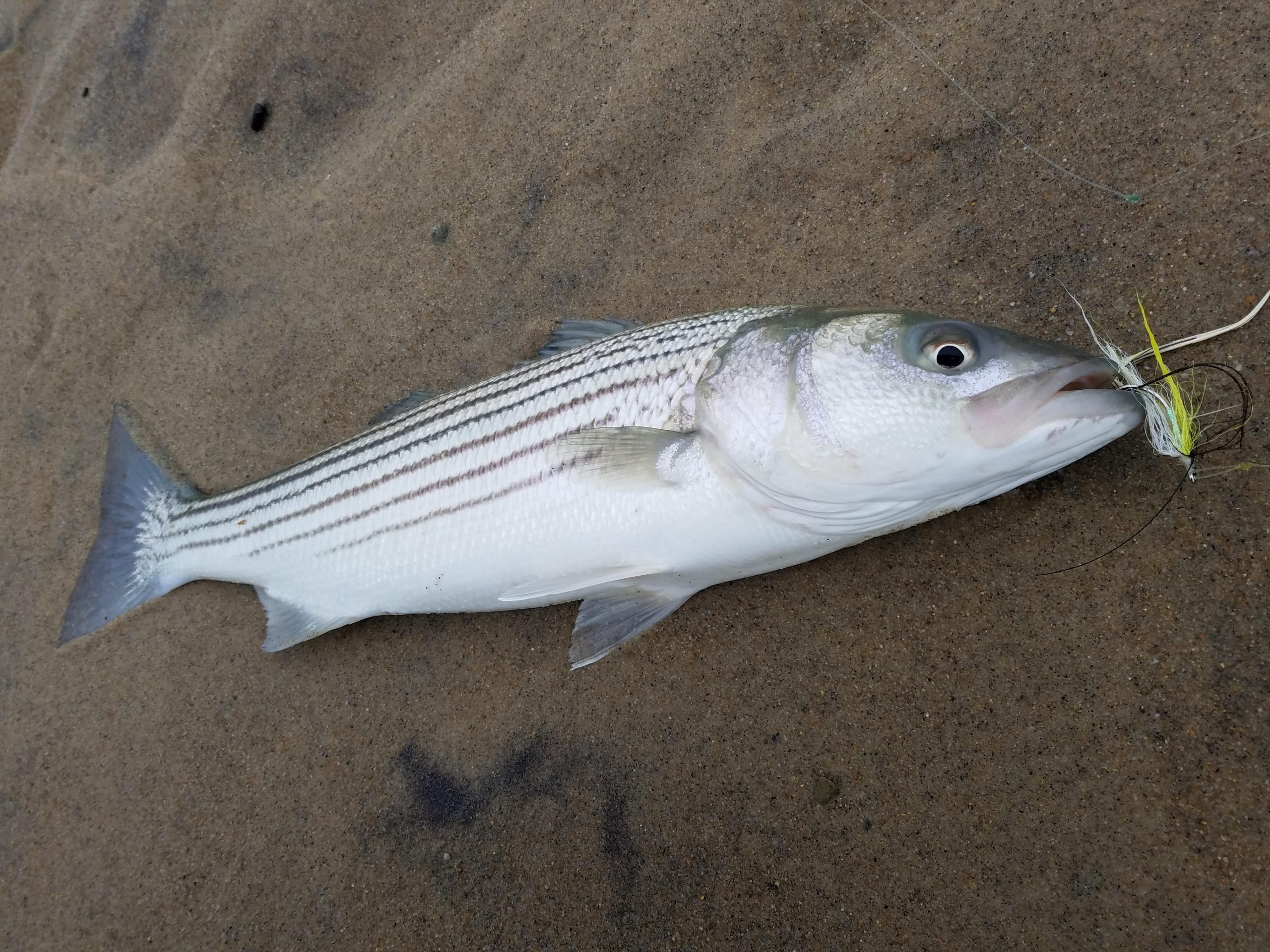 2 feet of water moves between slack low and high. Sometimes it’s best to ditch the boat and to wade.

You see, we’ve dogged the beaches since May catching migratory bass gorging on silversides. We’ve flogged the salt ponds with herring patterns and we’ve slung sinking lines and squid patterns in the rips. All the fish we’ve caught have been fresh arrivals covered in sea lice. Their coal-black lines, vibrant lavender and pink hues, and bright, white underbellies easily reveal their positions on a flat. Give them a week and their colors soften and they blend right in. They trade their distinctive colors for light browns, drop their sea lice and look faded like a pair of old pajamas. We have many nicknames for striped bass, and they range from stripers to rock to brown dogs to, yes this is true, Old Pajamas.

The arrival of striped bass on the flats is the first reason I hitched up my trailer to my truck. But the forecast called for a light variable wind. With slack low tide being two hours after sunrise I had it made. I’d catch the last two hours of the dropping tide when the sun popped, then I’d fish it through the second hour of the flood, and I’d arrive early to work. The setup was perfect.

It was pitch black on my short drive to the harbor. I saw fishermen parked at the coffee shop and other hoot owls wandering around. There was no launch line at the harbor, and no shenanigans either. I splashed my skiff without cussing even once. 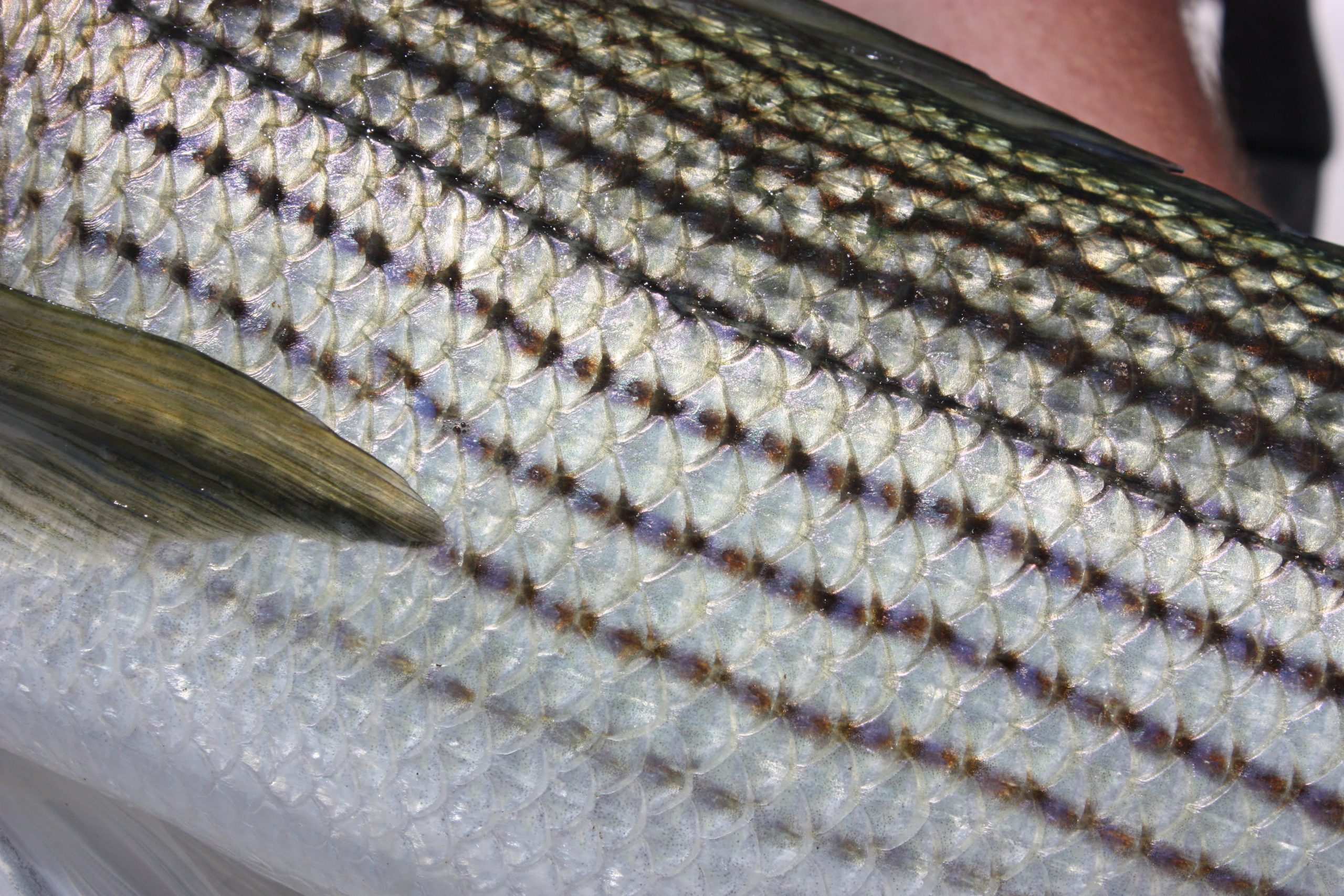 Dark black and purple colors are the calling card of a deep water fish that moved onto the flats to feed. In time, those colors lighten to a pale brown camouflage, leaving locals to call the fish Old Pajamas.

Today’s morning would unfold similar to yesterday’s and be the same as tomorrow’s. The sky would be full of brightly burning stars. After a while I’ll hear a flutter of cormorant wings as the shags leave their roost in search of a beak-full of bait in a tide seam. The sky will then brighten to the point that the stars will fade. When it does there will be a commotion from the gulls. Black-backed, herring, and common gulls are the ocean equivalent of barnyard roosters. They caw and squawk and make one heck of a racket. A morning just isn’t complete without ’em.

The wind sat down when the sun popped and when it did the slightly roiled surface flattened out and resembled a turquoise pane of glass. I headed up tide to the top of the flat. A sandbar ran parallel to shore where it formed the leading edge of a mile-long white sand flat. The light was perfect, and the tide was running so smoothly that I easily spotted the vee of nervous water. Gently stirred water is always the sign of a big school of fish. They were relaxed and slowly pushed their way into the current. To get above them I poked my way to the top edge, cut the engine and drifted.

I had a floating line on my saltwater 7 weight and twisted on a Kenney Abrames flatwing named the Sure Thing. I stripped line off of my reel and looked around. Everything was so perfect that I wanted to soak it all in. I wanted to remember this morning when the weather was cold and gray. I wanted to remember the colossal school of striped bass that moved up onto the flat long after the season ended and the Nor’easters blew.

All of this romance was nice, but it was time to stretch some line and fish. By now the sun was behind me and high enough that I could see a silvery flash made by a fish turning to feed. I could see tails, and they were flat, so these fish were bass. Were they forked they’d be blues. I seldom care which kind of fish are here so long as I’m on the flats. The rest is just gravy. 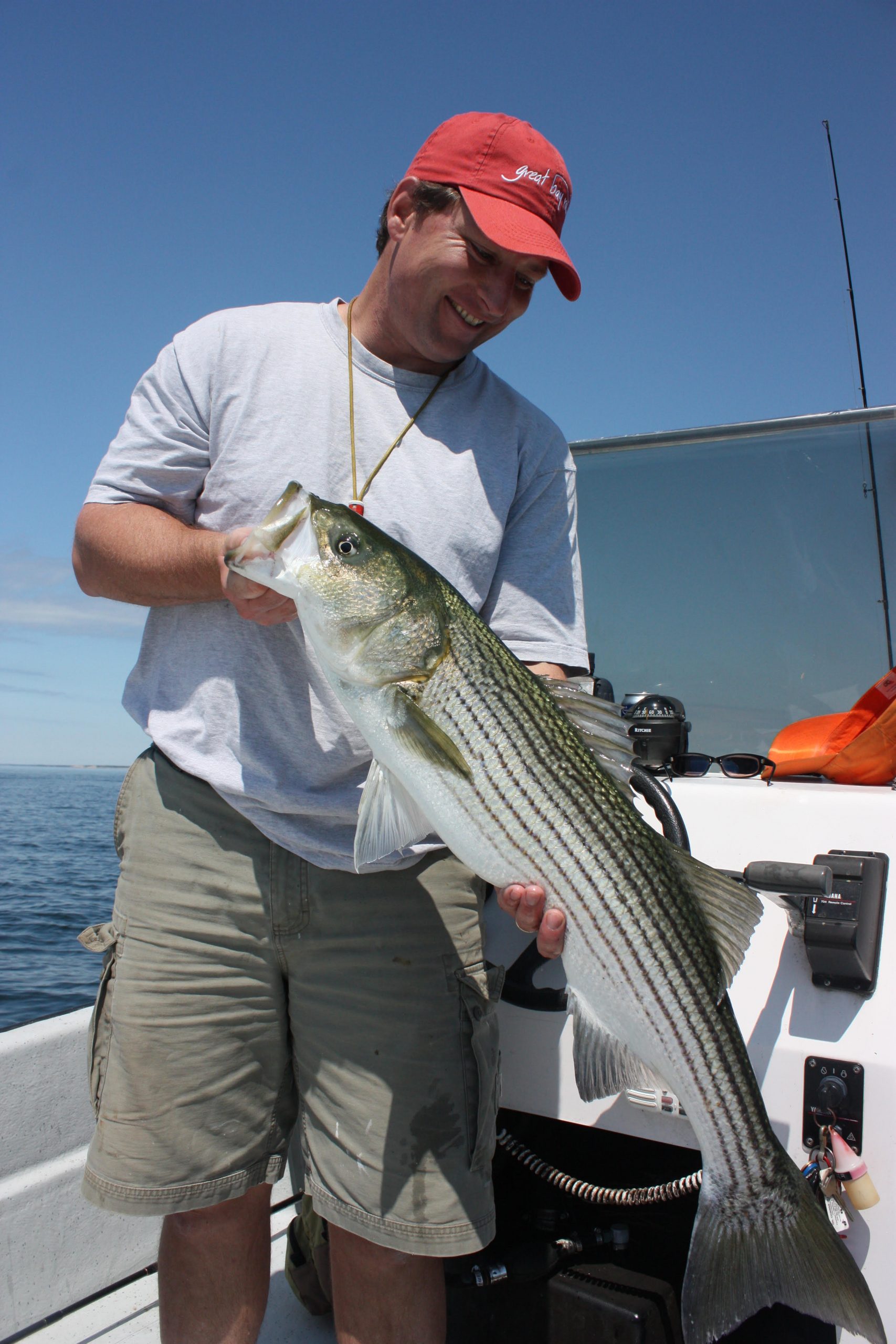 Hungry fish make mistakes on the flats. The author tries his best to target them….

Water haul, water haul, double haul, dump. Strip: short-short-looong….short- looong-short-short-looong. What’s that, a bass… he turned, and he’s following my fly. Another bass peeled off from the school then another and another and another. In short order there are a dozen fish trailing my fly, but they don’t take. They liked the fly but they didn’t love it, and that means it was ‘too something.’ It might have been a bit too long, a bit too flashy, or a bit too big. I start with too long and place the saddles in between my teeth. I bite off a half-inch, maybe more, but that should do it.

I have drifted with the current but the pod of fish is still there. The sun is behind me and I see everything now. I see shadows of cruising fish, flashes of eating fish, and all different sizes of fish. I look for a fish bigger than these dinks. There he is, off to the side. One roll cast pick-up with a line release on my back cast and a side arm delivery. Some fish spook when my line kisses down on the water but after a few quick strips the bass pony up. Two smaller fish turn up, they’re interested, but before they can get fussy the boss charges in and hits my fly. Three strip strikes and the fish runs across the flat. It’s a shame that he’s blowing out the other fish, but who cares? I hope they won’t go far.

I clear the line from the deck, get the fish on the reel, and then he slides off the flat into a channel. In the past, and if I were wading, I’d drop into the deeper water and follow the fish. But these days there are too many Horsehead and Harbor seals. With their swollen populations come their number one predator, the Great White shark. I hate that I’ve got to think twice about going deep but my legs are more important to me than a fish. 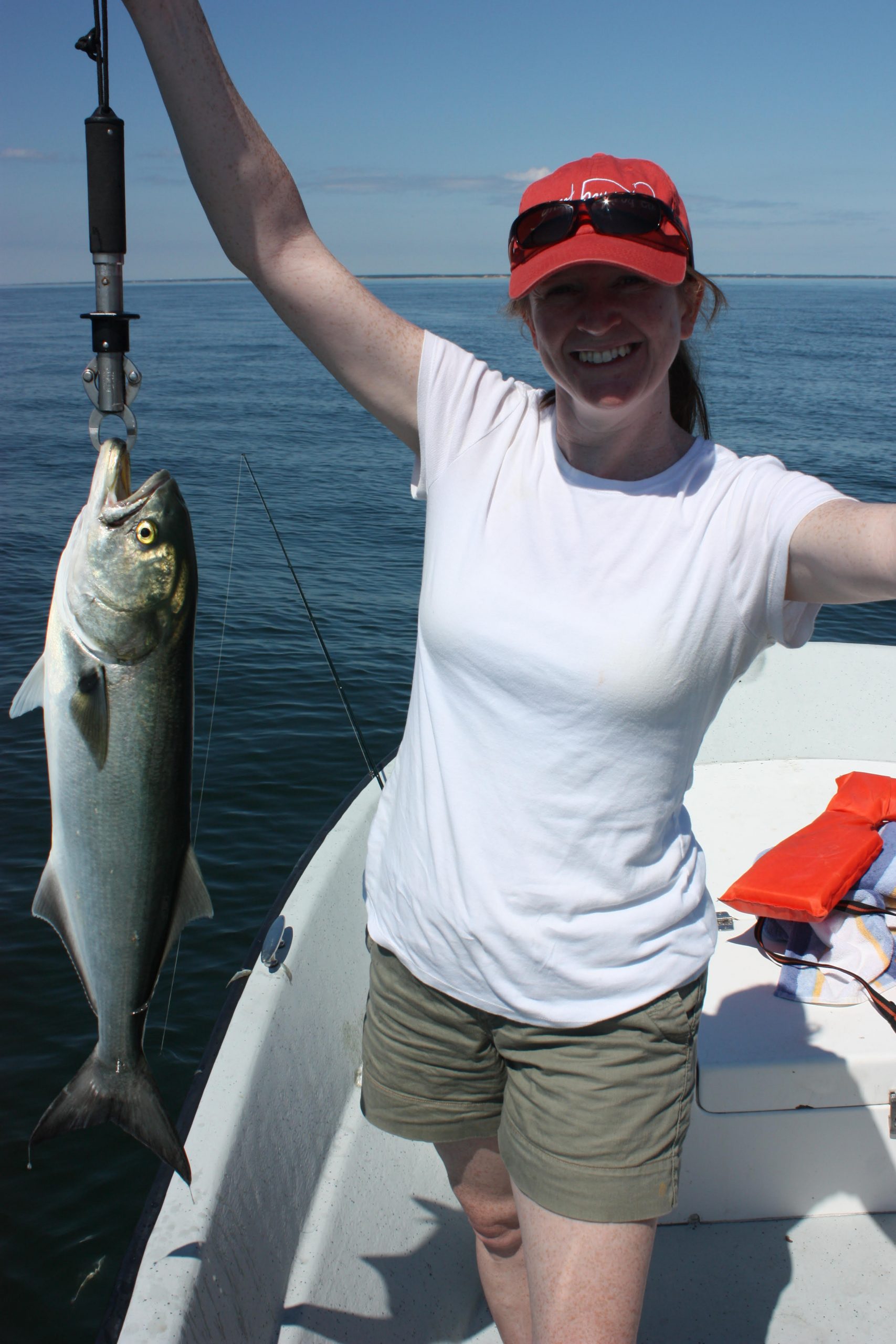 Bluefish are frequent guests on the flats. Angela Keer prefers their head-shaking tugs, jumps and sizzling runs to the quiet pull of a striped bass.

Sometimes there is so much bait that tremendous flocks of birds come in for an easy meal. If you see them at a distance, you know they’re pointing towards the bait. The fish are usually close behind. Pole your boat to them and when the water is low enough, get out and wade. Just be sure to get back to the boat when the tide turns. Unless you want to swim.

I trimmed down the outboard and turned over the switch. There was no way of fighting him back up against the tide so I’d drift down to him. Now and again he’d slop around on the surface, and I’d smile at his display. He was on a flat that didn’t have a name that nobody really fished. It wasn’t here last year, but thanks to the winter storm that deposited some sand, it is here right now. This was a heavy fish, probably one that would join us for dinner. After all it was June. And time was on our side.