“Christmas is for kids,” it’s sometimes said, or perhaps more accurately, “for the young at heart.” The anticipation can be as great a feeling as the arrival of the day. You can get a similar excitement at times on the water, when you are sight-casting to a large fish, anticipating the bite, and waiting for the tight line to follow.

This thought crossed my mind on a recent trip to Fern Valley, where large fish treaded water in front of me like presents to be opened. Fern Valley is located on the Soque River in northeast Georgia, about four miles north of Clarkesville. Glad and Marty Simmons manage a half mile of the river, booking no more than four anglers per day in most circumstances. 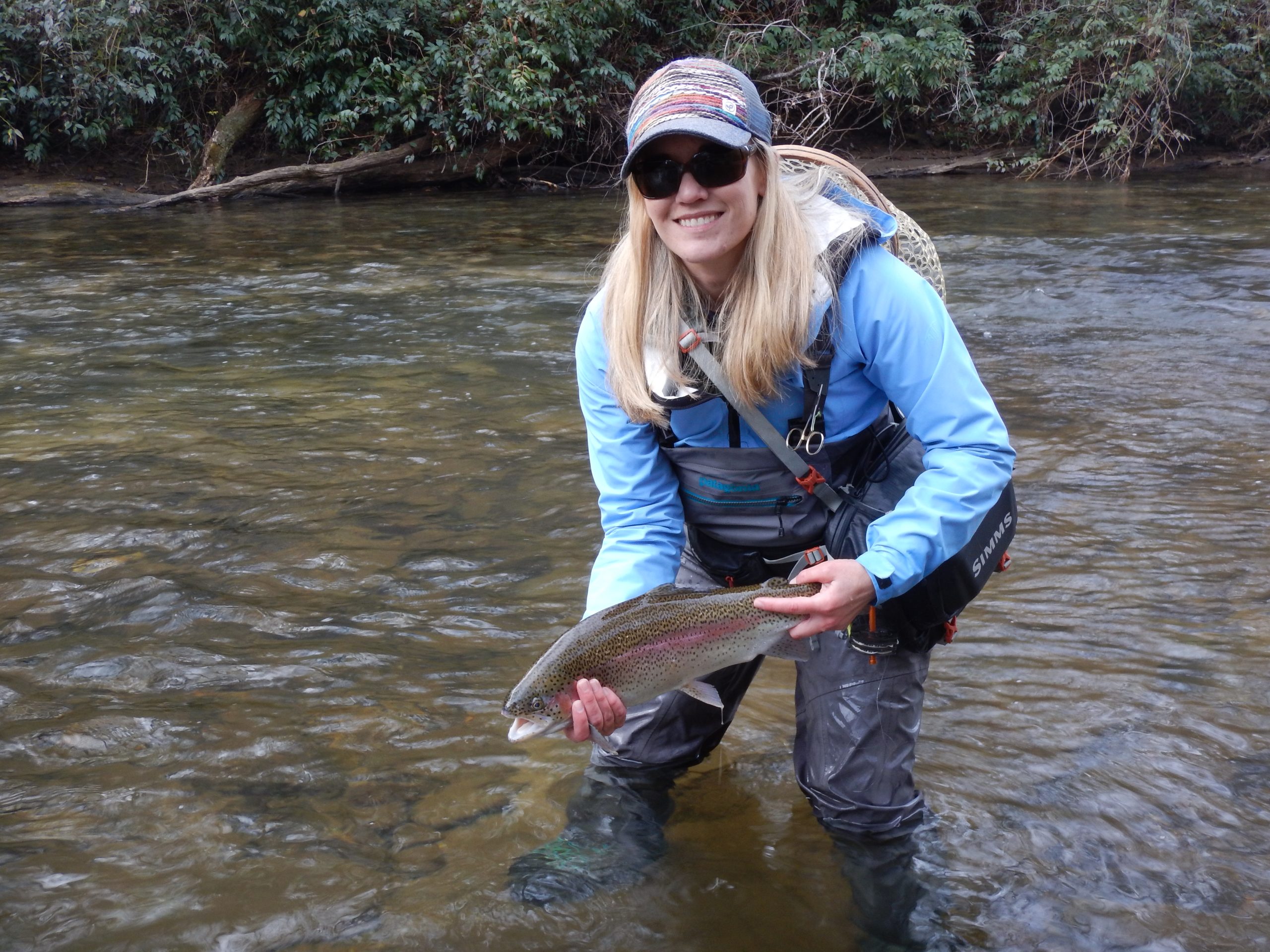 On this trip, Mike Watts, Corey Hunt, and I fished the afternoon together. We had taken an excursion in the morning to look at other sections of the Soque, and at one stop, watched a six-point buck courting does. He seemed a bit bothered by our intrusion, but I suspect it didn’t last long.

This water at Fern Valley was new to all of us and what we could see from the bank lifted our spirits in anticipation. Not only were the rainbows larger and more plentiful than most of us are used to, the water lit up when we spotted palomino trout.

Palominos are hybrids between rainbows and West Virginia golden trout. Although you are more likely to come across them in West Virginia, Pennsylvania, Virginia, and Maryland, you will also find them at Fern Valley. Nicknamed “the swimming banana,” it’s an apt description of their color. 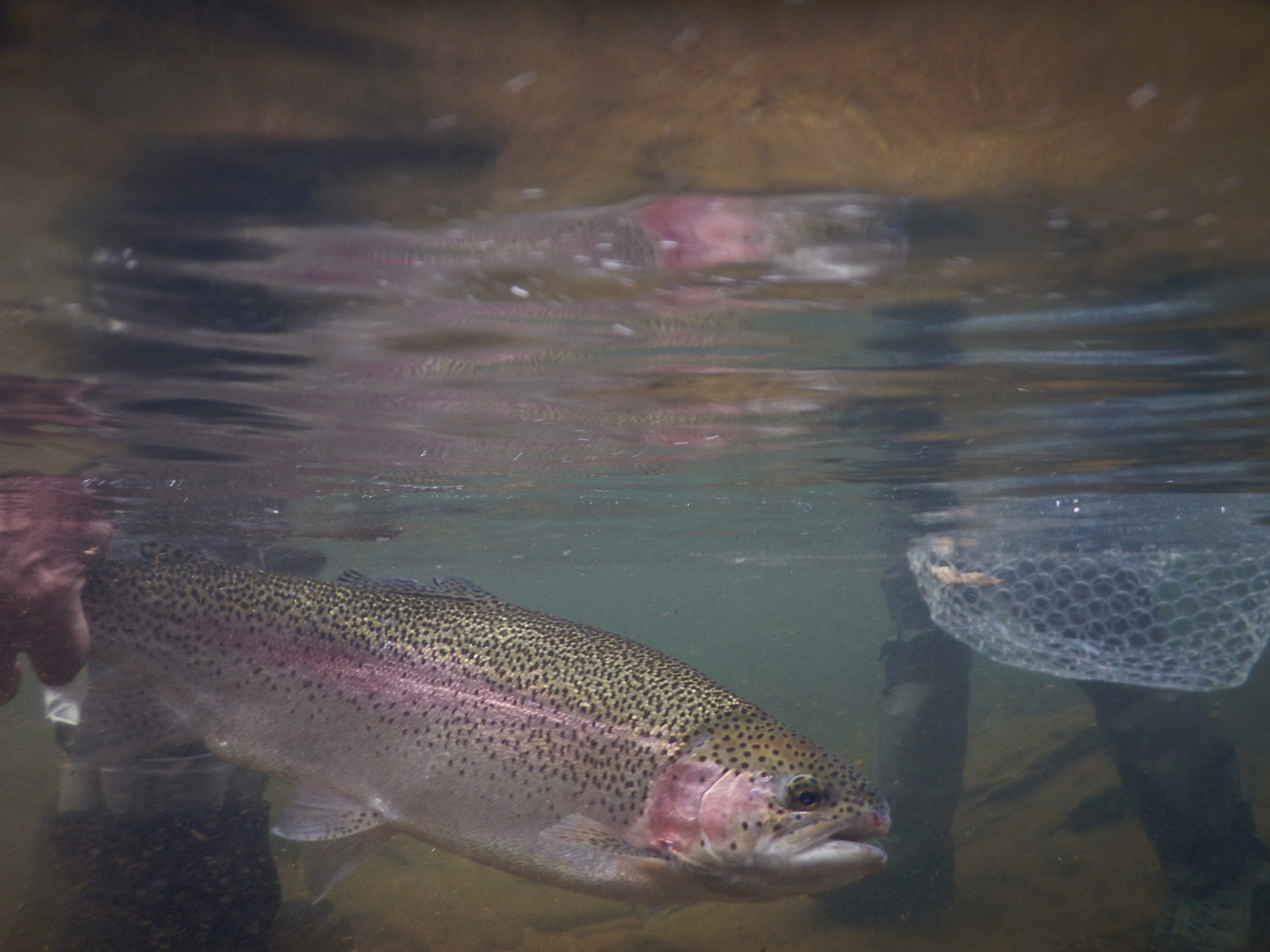 Underwater photo of the release

Whenever we came to a pool with palominos, they were the first fish we spotted, though once we focused, a smattering of rainbows less visible were always alongside. We were told the water also held browns, though they must have been lurking out of sight, as browns have a tendency to do.

On the November afternoon we fished, the water was low and clear and the fish a tad skittish. The water was easy to wade and the river was a series of riffles and pockets with the occasional flat section. On this day, the slow water gave the fish plenty of time to look a fly over.

As often happens, it took a few changes of flies to find the one that solved the riddle. The three of us had each picked out separate pools and our first fish all came on different flies. Mike and Corey both went to small nymphs with success while I settled on a small streamer with similar results. 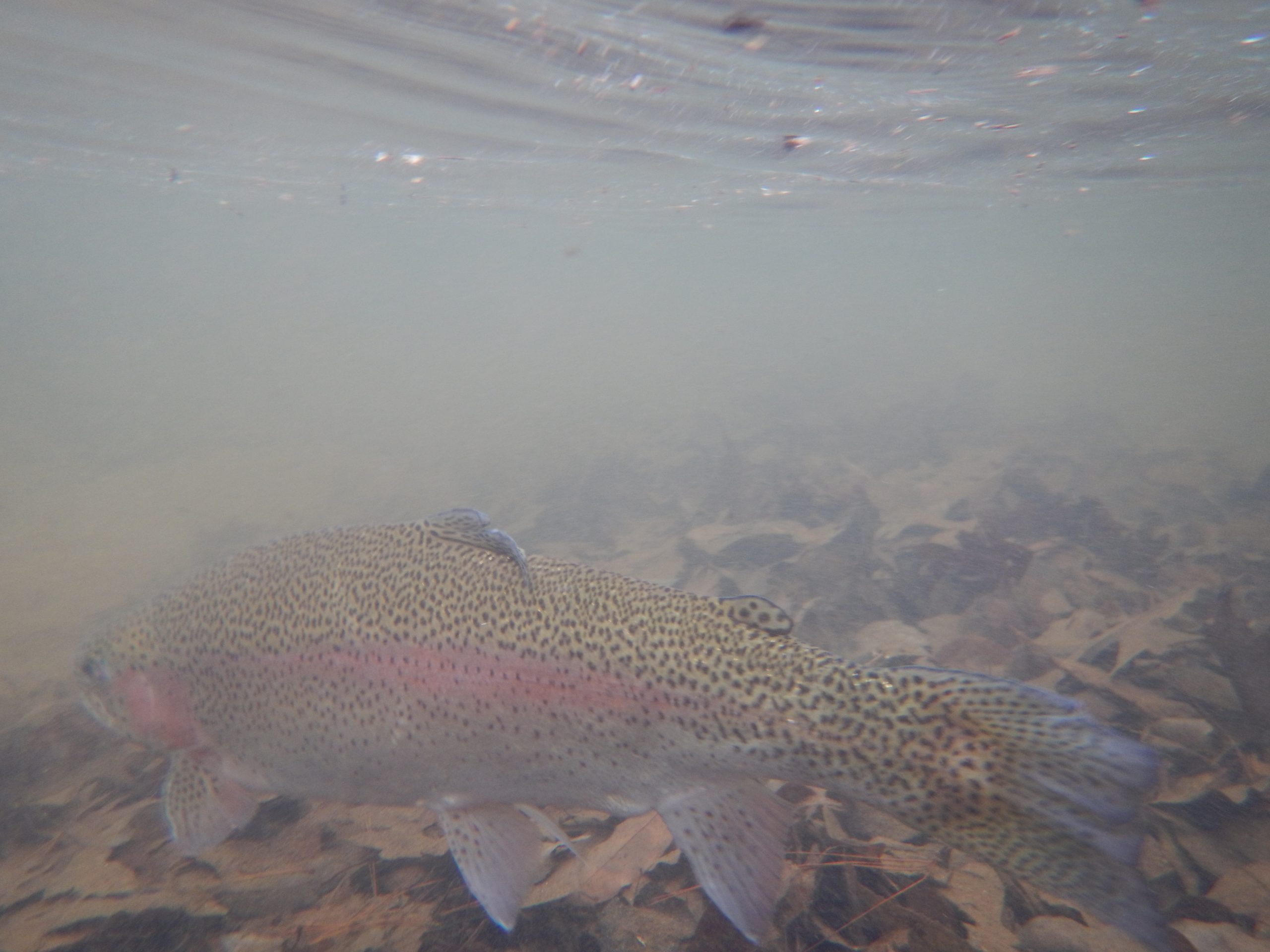 By mid-afternoon, we were the only ones on the river as the other anglers had called it a day. Still, the three of us occasionally traded pools and encouraged each other to catch the fish that had taunted us with follows or indifference.

Most of the trout I landed ranged from thirteen to eighteen inches, though larger and apparently smarter fish could be seen. As rainbows usually do, these fish made spirited runs and took to the air frequently.

The palominos seemed more selective and it made sense. Any fish that visible must have exceptional survival skills relative to predators and flies. 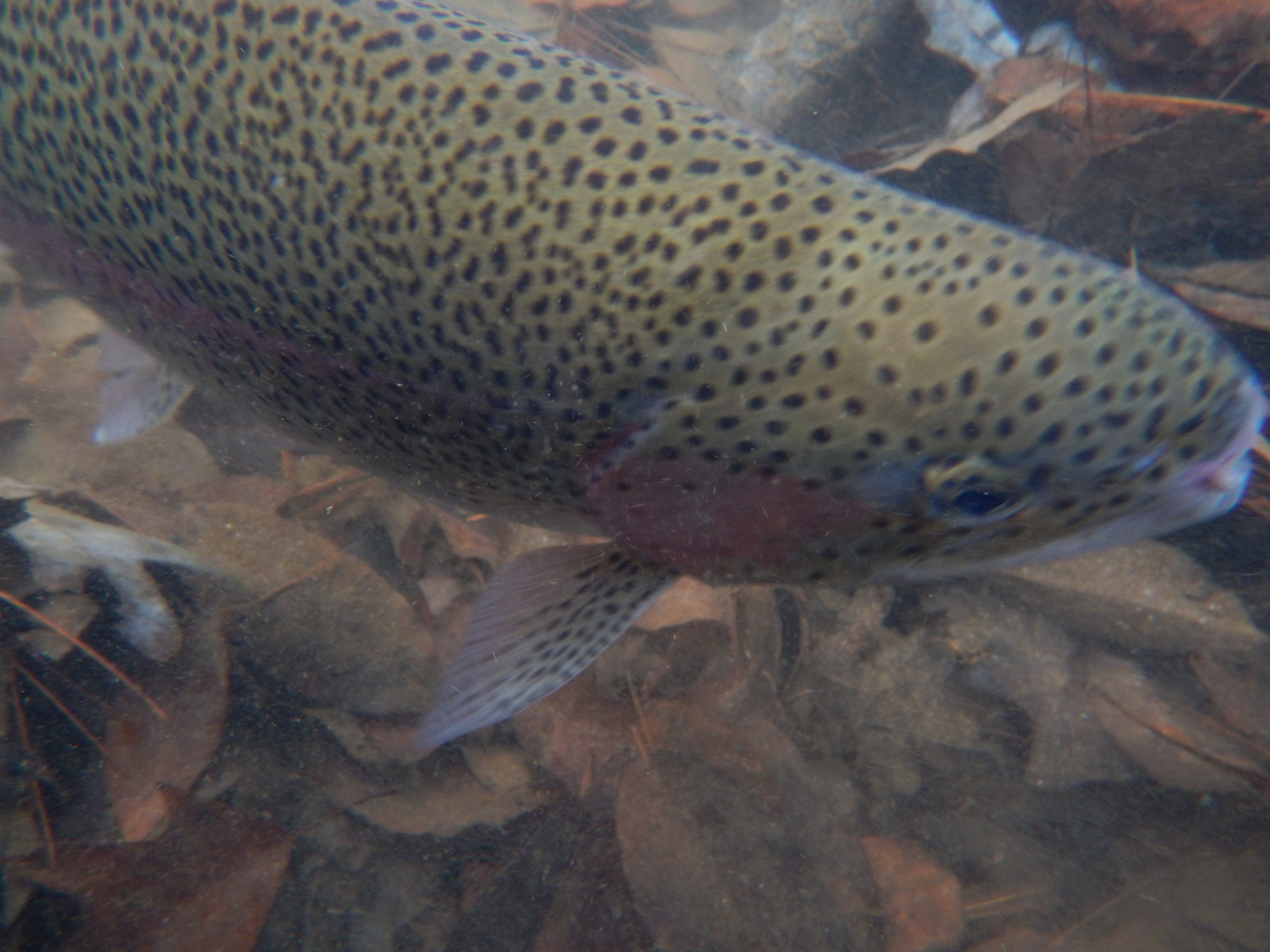 Late in the afternoon, Corey hooked a nice rainbow on a small nymph that took her up the Soque through several pools. Once, she had to cross to the far bank and work her line loose from brush her fish swam through. It was a spirited episode to watch and the landing made for some good photos.

As the sun dropped below the ridge, the fish and anglers slowed with the falling temperatures. We gathered by a firepit alongside a pool saturated with good fish, both rainbows and palominos. The palominos shone like Christmas ornaments.

Should you decide to give the Soque a try, you can book reservations at 770-597-4219 or take a look online at http://fernvalleytrout.com/. The fish photo gallery on their website will help put you in the mood for a trip. 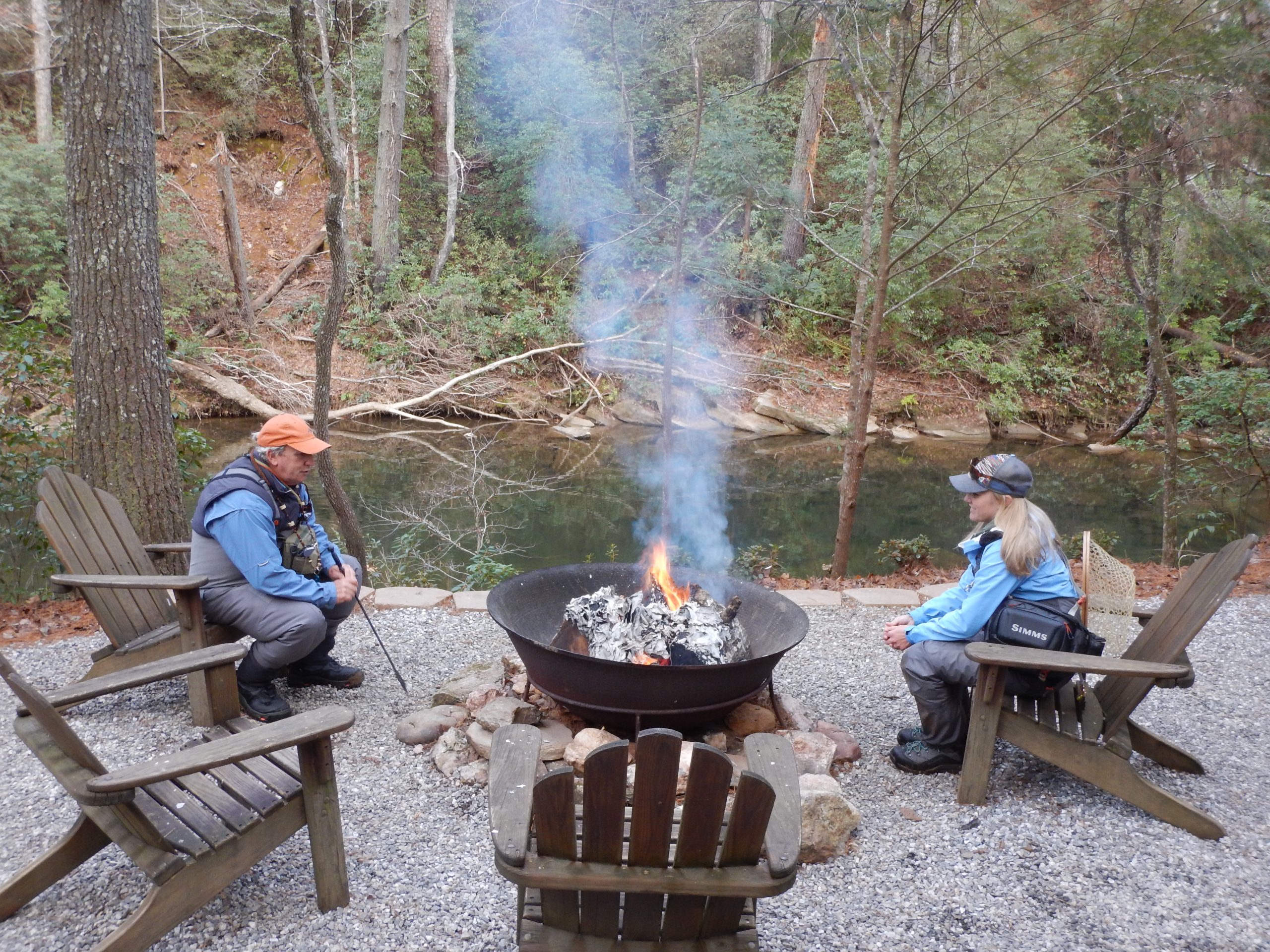 Jim Mize rarely turns down an offer to chase big fish. You can click (through this link) to find his award-winning books on Amazon or purchase autographed copies at www.acreektricklesthroughit.com.