For non-stop action and a wide range of species, Alaska is hard to beat! Around every bend a new river or body of water holds fish that will challenge an angler and be sure to provide enough thrills to last a lifetime. In addition to the top-notch fishing, the opportunity to view and photograph wildlife in a plus. The travel time from South Carolina is tiring, but it is well worth the experiences that will enrich the life of sportsmen.

There is something for everyone in Alaska, but we concentrated on spawn phase Silver salmon in the fall. On our first trip to Alaska with our friends Gene and Sherry Cunningham, my wife Margaret and I were primarily interested in seeing the abundant interesting sights that the state offered. We flew into Anchorage and after spending one night there, we traveled to Talkeetna, a small town on the Parks Highway, between Anchorage and Denali.

I had seen a feature on the TV series, North to Alaska, that expounded the merits of Talkeetna and we found lodging there the second night. Our host directed us to a nearby pool on the Talkeetna River and said that we could likely catch Silver salmon there. The next morning, it was a short drive on a dirt trace and was very close to the river. 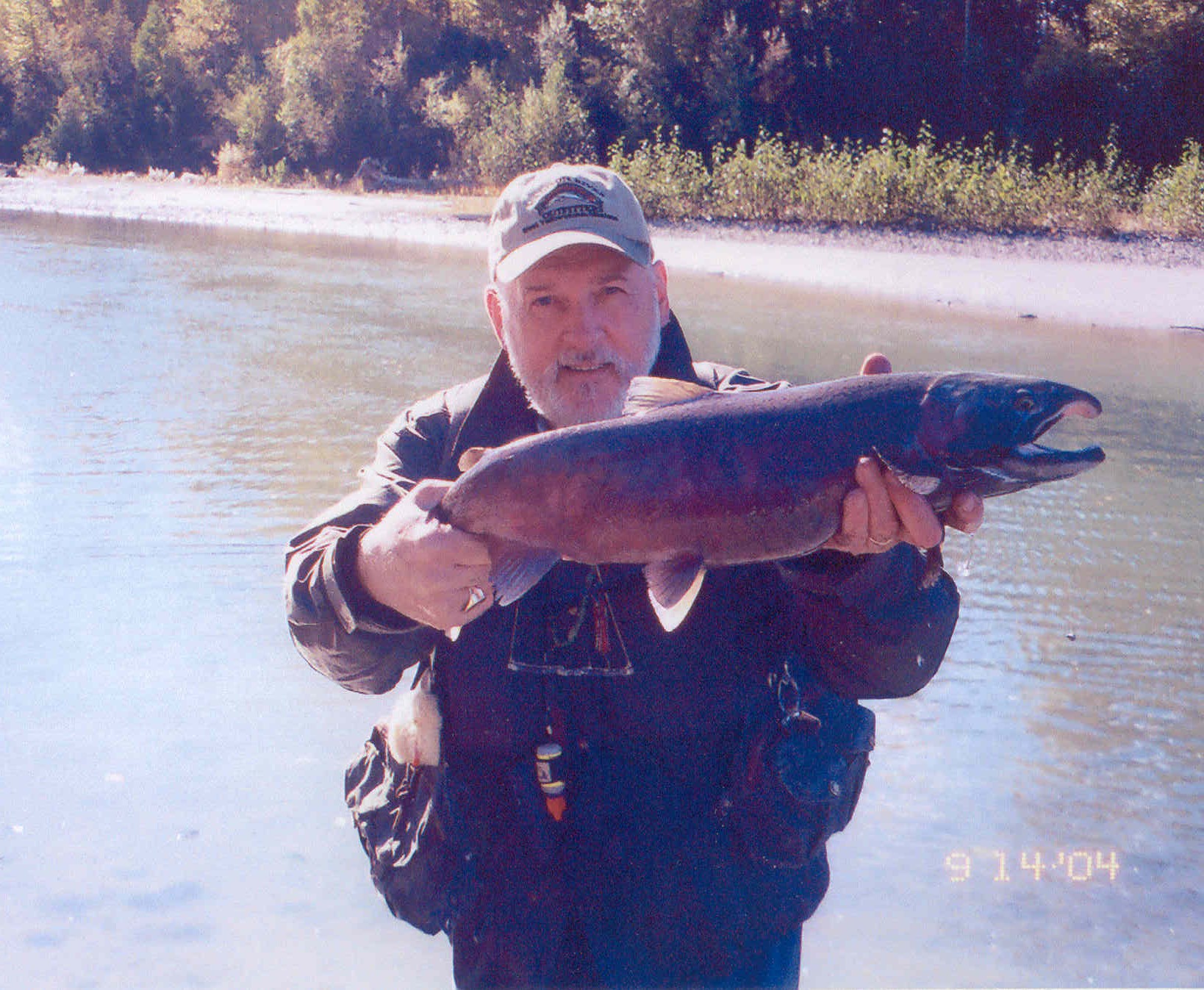 Another example of the abundant Silver salmon

We donned our waders, grabbed our gear and hit the water. As we neared the first good pool, we could see salmon traversing the shallows as they traveled upstream. Rods were quickly assembled and we began to cast. I had tied some flies on sturdy salmon hooks, using straight cut rabbit for the tail and cross cut rabbit for the body in several colors.

The action was almost instant and we caught an untold number of salmon in a few exciting hours. My friend, Gene had never caught anything larger than small trout on a fly rod and he hooked a nice salmon of about 6 pounds. As he brought it close to shore, he would bend over to land the fish (we were not using nets). Each time he bent over, he let the rod tip drop and the fish was off again on another run. Finally, through the laughter, I told him what was happening and he successfully landed the fish.

We caught fish non-stop for several hours that ran from 5 to 12 pounds. Due to being late in the spawn, we did not keep any, but released them all. 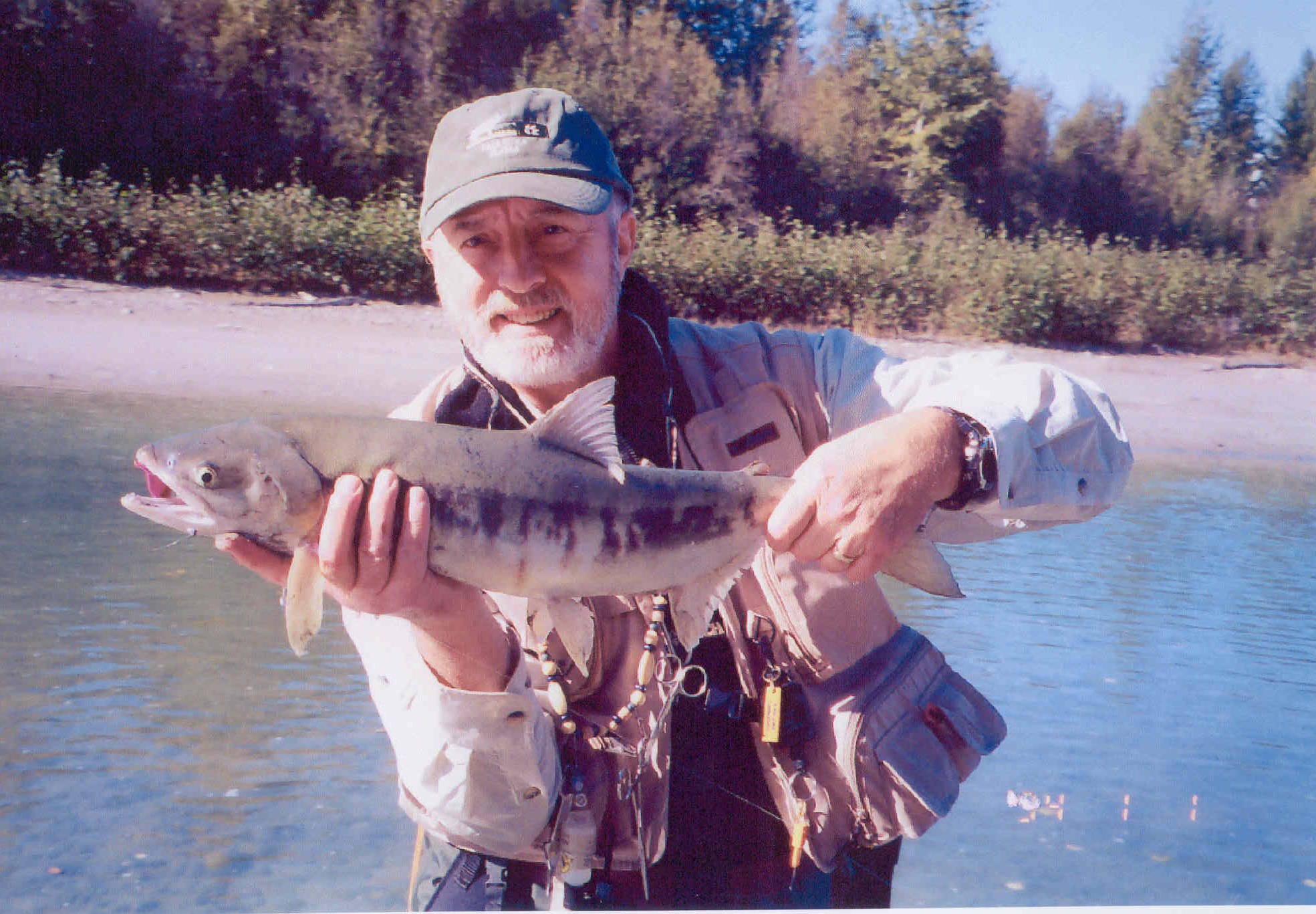 On a subsequent trip to Talkeetna, we stopped at Fish Lake, on the spur road to Talkeetna. Many of the float planes that fly sight-seers to Denali are located there. As we were shooting some photos of planes taking off and landing, we noticed salmon entering the lake from a small creek. A quick stop at a local fly shop revealed that the creek was open for fishing.

Later that day, we returned with our fishing gear and had a ball fishing for salmon and rainbow trout on the stream. It was narrow, but deep in places with undercut banks. The salmon were stacked in the stream and the trout were there to eagerly scavenge for the salmon eggs.

It was another fantastic day of fishing.

On another subsequent trip, we stayed a few days at a cabin on Meier’s Lake. As we pulled into the parking lot, a crew from National Geographic was leaving. The host advised that they had been photographing caribou for several days. 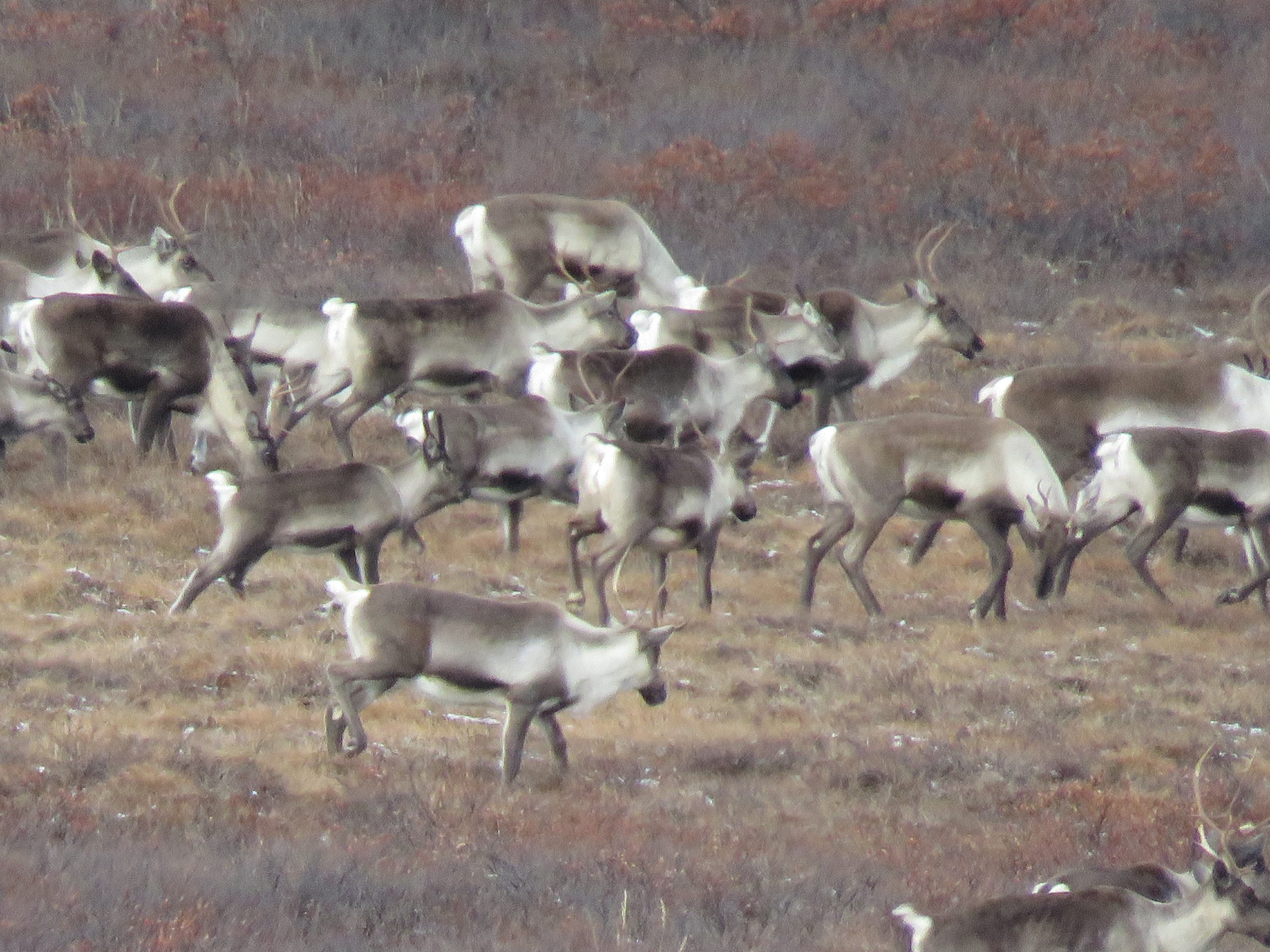 I had previously been unsuccessful in catching Grayling, but this lake was reported to have a healthy population of the species. The next day, Gene and I braved the rainy weather and hit the water. It was a good day, but the fish were not huge. Most of the catch of a dozen or so Grayling was in the 12” to 15” range. It was, nevertheless, a great experience catching these exotic fish with the huge dorsal fin and iridescent sheen.

It snowed about 5” that night and as we left, we drove into an area called Tangle Lakes. The lakes are located on a road that cuts across from the Richardson Highway to the Parks Highway. It covers about 125 miles, but after leaving Tangle Lakes, it is dirt and gravel only. 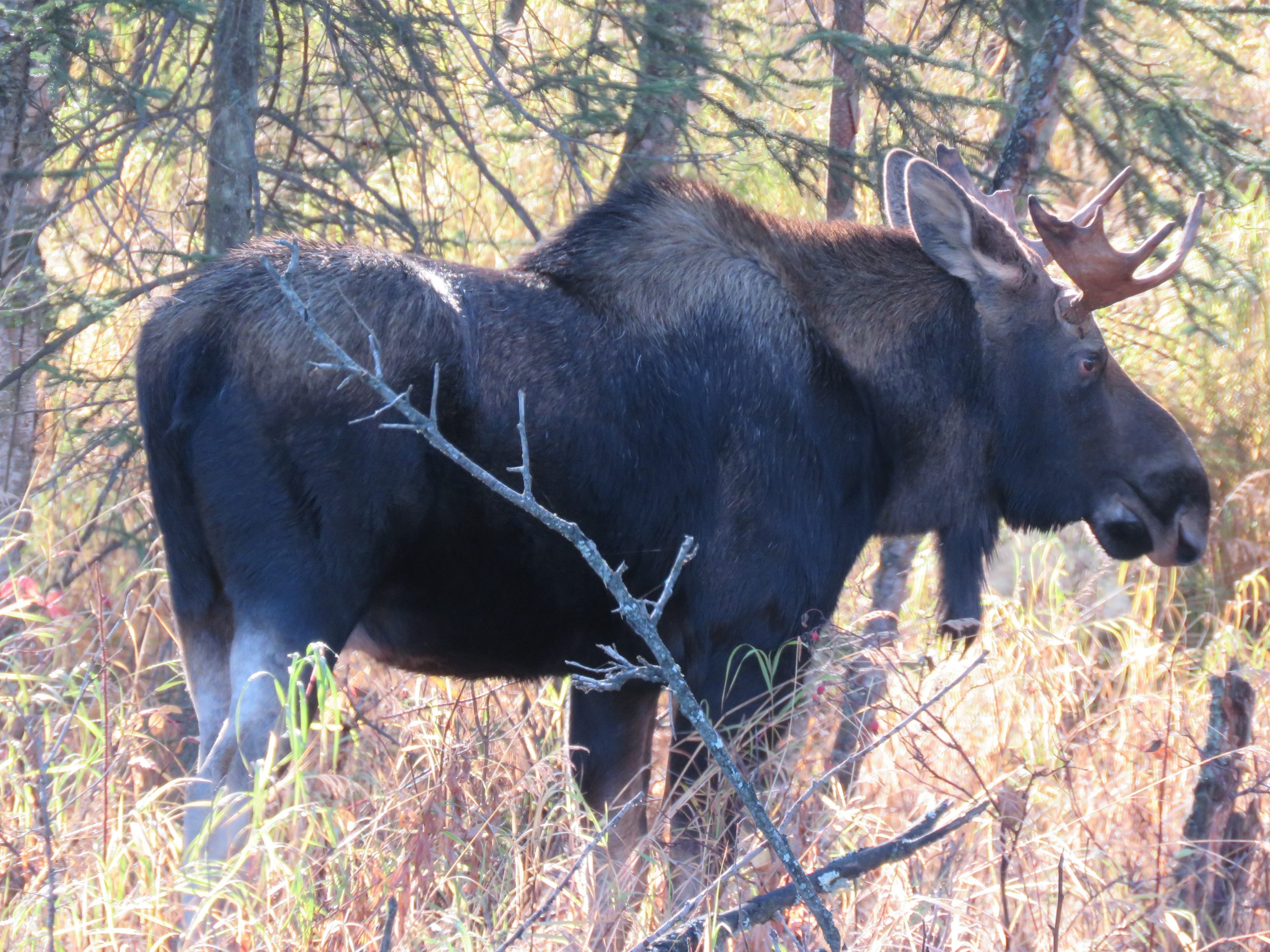 We traveled the 20 or 25 miles to Tangle Lakes and turned back due to the increasing elevation and unpaved road ahead. On the way out, we were fortunate to spot hundreds of migrating caribou near the lakes. We shot some memorable photos that are treasures. 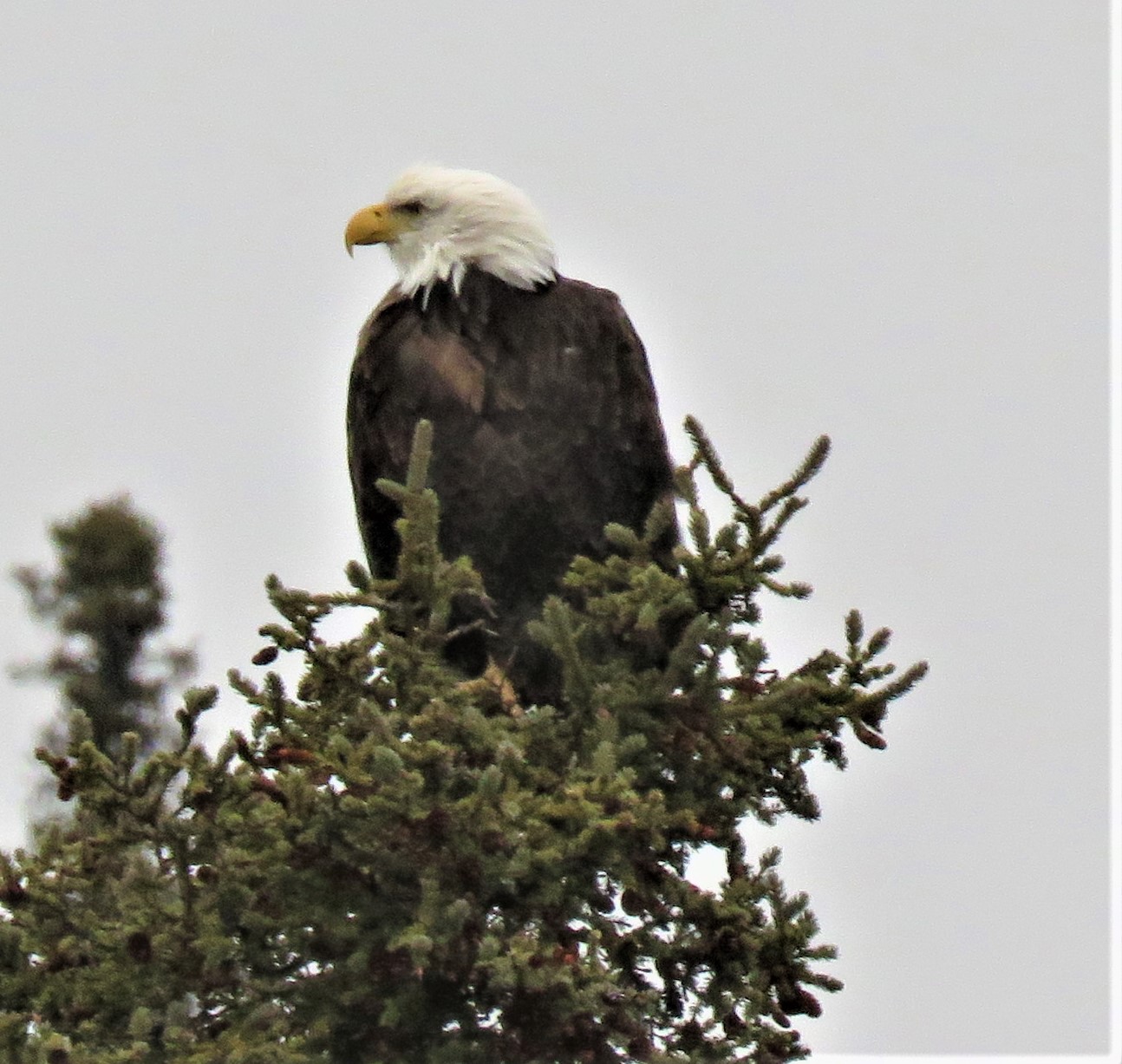 When traveling in Alaska, it pays to be alert. We had some great encounters with moose, even in Anchorage. Moose, Bald eagles, bears, ospreys, caribou and other wild creatures are abundant and offer many opportunities for photos.

Even if the animals were not visible, the topography is breathtaking and offers views that are astounding. Shots of Denali and other landmarks offer stunning opportunities.

One can fly into Anchorage and rent a car. A good tour is to travel up the Richardson Highway, visit Chicken (an old gold mining town) , North Pole, Tok and Fairbanks. From Fairbanks, travel south to Denali, Talkeetna, Wasilla (home of Sarah Palin) and back to Anchorage. There is lodging along the way and the view changes constantly. There is never a dull moment and you need to keep the camera handy.

It is the trip of a lifetime. We have been four times and it never disappoints!

Books by L. Woodrow Ross are available on Amazon Kindle. You may also purchase Ross’s work here at RiversandfeathersBooks page. He has 40 selections available as electronic versions and 8 of the most popular in paperback. Check out some of the latest: Burial Ground, New Beginning in Talkeetna, Appalachian Apocalypse, Appalachian EMP Aftermath and Montana Dream.