First Trout on a Fly

My high school biology class was taught by a small, wiry man with short cut hair and a reserved, almost military presence. His delivery was matter of fact and he didn’t entertain laziness in class. I once saw him throw his watch against the blackboard in frustration when a student fell asleep.

Our relationship changed the day I found out he was a fly fisherman. Up until that time, I had mostly thrown poppers for bluegill. After class, I often picked his brain about trout fishing and could not always comprehend the depth of his knowledge about insects and hatches.

For my biology project that year, I seined the local river for aquatic insects and stocked an aquarium with them in our classroom. I had an assortment of mayfly and other nymphs. After a few days they all died, so to finish my project I added crayfish to clean up the remains.

Not long after that, I took up fly tying. I worked at the hardware store after school and used most of the money on fishing gear. High-quality rooster necks were beyond my budget at the time and I might have mentioned it to my biology teacher. One day he showed up at the hardware store with a paper bag containing about twenty capes with the heads attached. He smiled and left me wondering where they came from. Judging by the quality of the hackles, I suspected these were losers from a local cock fight.

As an aside, this was the same teacher who helped me with my chemistry project that year. It was titled, “Fermentation and Distillation.” Basically, my lab partner and I were making moonshine in chemistry class. My biology teacher gave us the recipe. 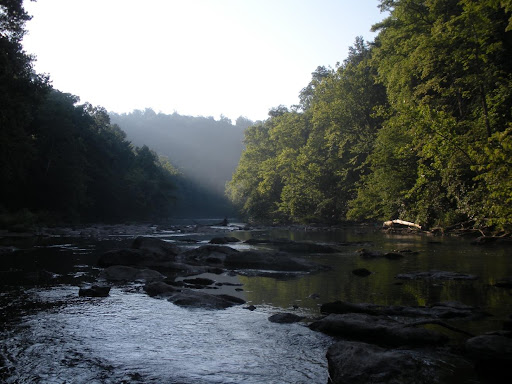 Since the hardware store kept hours just longer than the bank, I could often drive up to the river after work and get in an hour or two of fishing. I began to carry my fly rod if for no other reason than I wanted to test flies.

The trout section of this stream was a tailrace that came off the bottom of a lake that was over two hundred feet deep at the dam. The released-water temperature varied by less than a degree year-round and generally came out around 46 degrees. When that cold water hit the warm summer air, it produced a fog that hovered over the river, so you often felt like you were alone in the world.

On one of these foggy evenings, I took my fly rod and rigged it with a white marabou streamer I had copied from A.J. McClane’s Fishing Encyclopedia. The fly had a silver tinsel body, white marabou wing, and a red throat. I liked the way the marabou breathed in slow water and hoped a trout might as well.

Back then, most rods were fiberglass as was mine. It was about eight-feet long and flexed easily back into the midsection as fiberglass rods tend to do. My reel was one of the old automatics that sat horizontally under the rod. As line was removed, a spring came under tension and by touching a lever it automatically retrieved all the line until the tension released. Unfortunately, the reel had a tendency to trigger itself when I least expected it.

I had chosen a section of riffles to fish that evening thinking that most of the fishing pressure would be in the deep pools and maybe I could find a few scattered trout holding in fast water. As I swam my streamer through the riffles in my best minnow imitation, I noticed the dimple of a rise near the far bank.

Under the alders along the river, a rainbow about twelve inches long routinely poked its nose out, sipping something invisible from where I stood. A cast under the tree branches looked difficult from where I was, but I figured if I cast upstream and fed line until the drift got in the vicinity of the fish, I might begin a retrieve that would fool it. In any event, it was the best idea I had at the time.

So, I cast about fifteen feet above the fish, fed line to keep from pulling the streamer away from the bank, and let the line tighten just before the streamer reached the trout. Luckily, my reel didn’t self-retrieve on this cast and my fly twitched just as the line tightened.

The rainbow must have liked what it saw because the next thing it did was roll on the streamer. That flash and the energy sent back through the fly line electrifies me still. 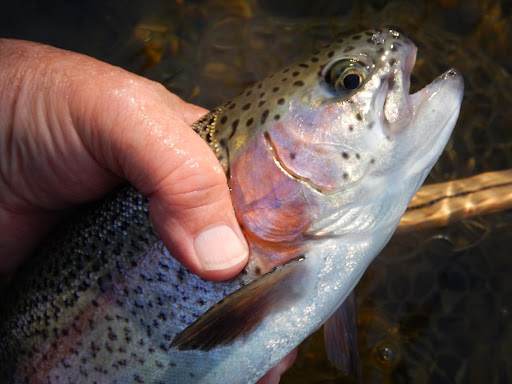 I don’t remember much after that except landing the trout in disbelief that I had fooled it with a fly I’d tied. I managed to keep the trout’s head up and slide it across the surface of some fast water and into the net. The wonder of making a fly from feathers and thread, finding a fish, and then fooling it fascinates me still.

No one can predict from a point in time what will result from an event. But looking back, so much seems to have flowed from such a happening as surely as a river can only follow the canyon it finds itself in. That first trout on a fly did this for me and the countless streams, ponds, and lakes I’ve fished since appear now as logical steps along the way.

Jim Mize still keeps a marabou streamer in his fly box. You can find his award-winning books on Amazon or purchase autographed copies at www.acreektricklesthroughit.com. You may also purchase his books here by clicking on the RIVERS AND FEATHERS “BOOKS” page.