Fall Fishing in the Smokeys 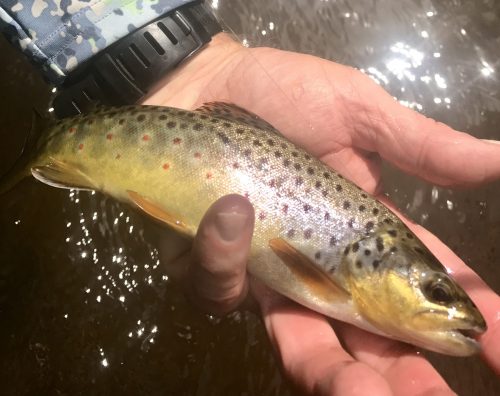 The fall is such a brilliant time of year to fly fish rivers for many reasons. The streams throughout the Blue Ridge Mountains of Appalachia once again come alive with hungry fish and a beautifully colored landscape. Cool nights lower the stream’s water temperature, and trout emerge from their lethargic summer state to a more active one, especially when it comes to eating my fly.

Summer months are spent streamside at daylight wade fishing, hoping for a couple of hours of solitude and just putting my feet in some cold, running water. The hope for a fish fades when innertubes appear with their occupants splashing and laughing as the sun warms the water and air temperatures climb to their summertime highs. But it’s all right to share the river for now. They’ll be gone soon enough. 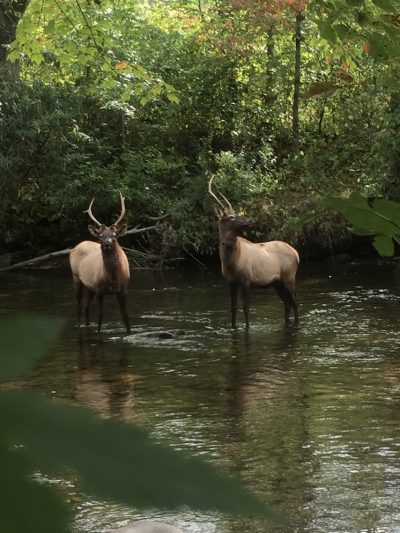 Two Elk taking over my run!

By noon, my summer fishing usually comes to an end. When the dog days of August are in seasonal control, my thoughts turn to fall in anticipation of all the fishing this season has to offer. And when the first cool nights of late September finally appear, with night temperatures in the 50’s, excitement reigns. During the fall, my fishing days become longer, and I observe leaves slowly fading from green to red, yellow, and orange as time passes. I quietly wade the same river edges I did in summer but now, serendipitously, I find hungrier, rising trout as I fish my October caddis pattern. My imitation brings an occasional strike. The water is usually still low and clear from summer but is beginning to turn colder again. Except for occasional remnants or deluge of a tropical depression, the rain doesn’t usually pick up enough to restore water flows until mid-October through November.

Everyone has their favorite fall stream, and I am no different. I have become nomadic to a degree and want to fish them all. Early fall in the Great Smoky Mountains is a special time. Being at a higher elevation, fall begins to settle itself here first. 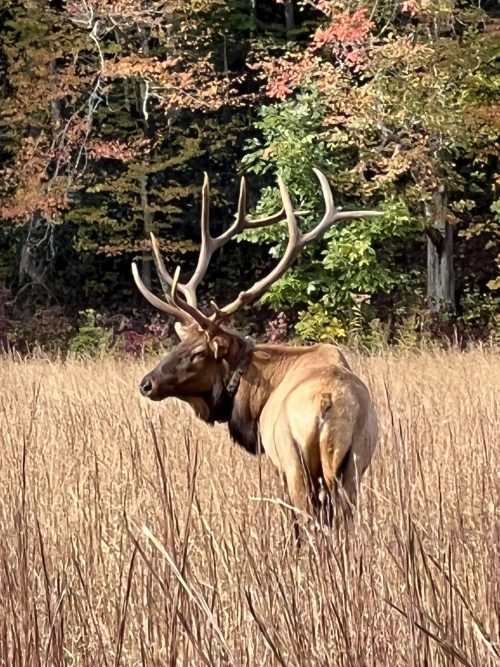 A Bull Elk in the fields of Cataloochee

Several Smokey Mountain Rivers come to mind when reflecting on my fall fishing experiences. Fishing the Oconaluftee, Raven Forks, and Cataloochee Rivers can be exceptional, along with their feeder creeks. Small, native rainbows caught fishing dry on a 3-weight rod while listening to a bull elk bugling, trying to round up his herd of females, never ceases to send a cold chill. Once, I walked up on two young bull elk sparring for dominance while standing in the run I had wanted to fish. As I eased down the path, my movement caught their attention, and they surveyed me intently as I quickly hastened along. A management decision was made not to argue with them over that run but to wander and find another.

Each season brings a different temperment to a river. The moods of a fall river are more reluctant to offer a fisherman a few fish when compared to summer. With water levels still low, the fish became extremely wary and spooky. I remember sitting on a moss-covered bank and watching a pool above me. The older I get, the more I like to sit and observe. There were some feeding fish in the pool, but when the gentle breeze from an approaching cold front caused acorns and twigs to thump the water’s surface, they scattered. But only briefly. 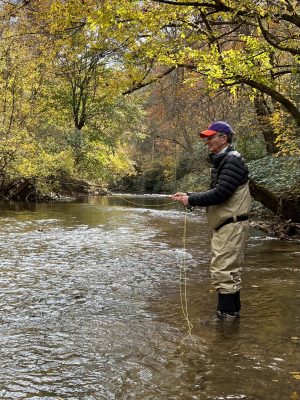 Brad Williams fishing a tail out on a chilly Fall afternoon

Another stream that I fish meanders down from a mountaintop spring, runs through a small gorge, and funnels over a waterfall. From there, it flattens into a slower-moving river. One year I had worked my way up to the waterfall and found the perfect rock to have lunch. The woods are usually condensed with trees, with little sunlight penetrating through the summer canopy. But on this fall day, I couldn’t help but admire the variety of colors that seemed to brighten the woods. The intense colors of the yellow and orange leaves appeared to absorb the sun and radiate the hillside with light, brightening the forest of evergreens. I remember that small hoppers and larger Adams parachutes worked well that day. Those feisty, wild rainbows pulled hard and jumped with intensity. Pinching down the barbs allowed for easy releases.

Being on the river in fall also brings a sense of solitude. Football and hunting seasons have filtered most of the anglers. Except for the leaf watchers and ardent hikers, the river’s wild occupants and I share an uncrowded experience. Remnants of walnut husk lay heaped in small piles as raccoons bring them to the river to wash before devouring them. Abundant animal tracks embroider the riverbank leaving indentations of prior visits. 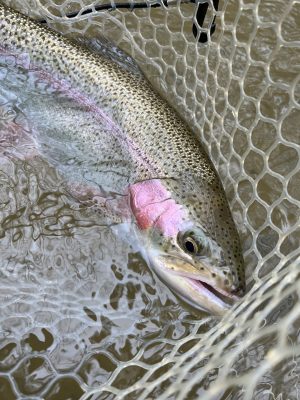 A feisty rainbow succumbs to his fly imitation!

The Fall air has a clean, crispness to it. The haze from summer humidity that enveloped the mountains has now left. It feels exhilarating. And the fish seem to like it too.

Dealing with falling leaves can be aggravating but only briefly, usually lasting just a few weeks. If leaves were fish, I would consistently have spectacular days fishing. When my flies finish their drift and begin to swing around, they become a leaf magnet.

Dead leaves are always attracted to my hook point. Pulling them off before the next cast becomes ritualistic, though it becomes a chore after a few hours. When several leaves get hung at once, they bend the tip nicely. It’s the larger poplar leaves that provide some of the greatest resistance. Just a small sacrifice to find that willing fish. There are moments when the fish caught are so small that when compared to the leaves, the leaves pull harder in the current; they just don’t get acrobatic. 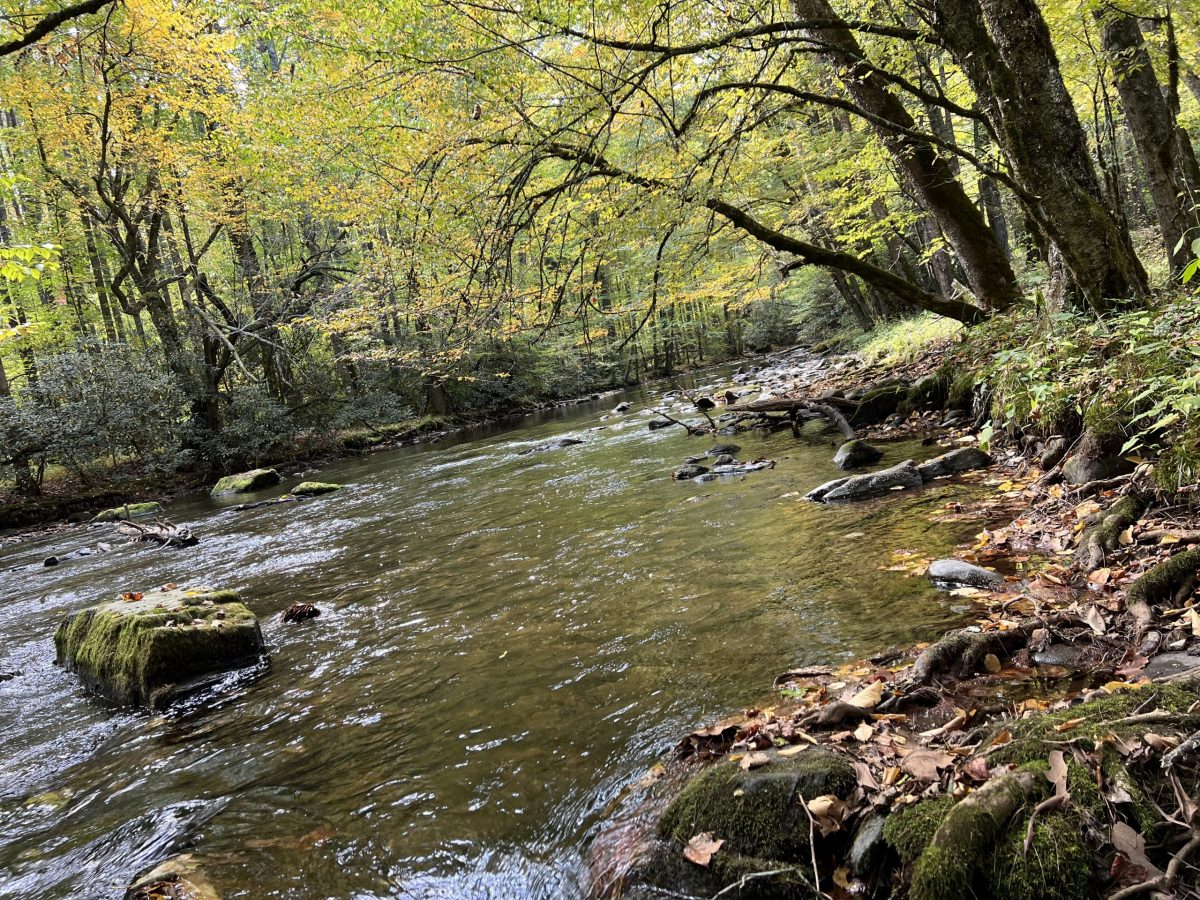 The Cataloochee River foliage is dressed out in yellows.

Watching a fluttering leaf catch a slight tailwind and glide down to the water is peaceful. Small dimples circulate outward as it gently and silently lands on the surface, and the water begins to wash it downstream. And onto my hook.

Fishing never stops in the Blue Ridge Mountains, but fall is a special time. It stretches from short sleeve shirts in September to fleece and flannel in November. Every river has its own distinct mood and personality, and I will continue to always wade through the changes. There is something special about the fall. However you define it, “happiness is where the heart is.”