This story is dedicated to my friend and fishing buddy Tammy Wilson, who would have loved being with me on this trip.

I had the day off from my usual duties as a guide at the Lodge at Whale Pass. I was eating breakfast there when I spotted Grocer Don coming in.

That was a generous gesture by Don if ever there was one. At about 8:30 the vehicle headed out of Whale Pass. 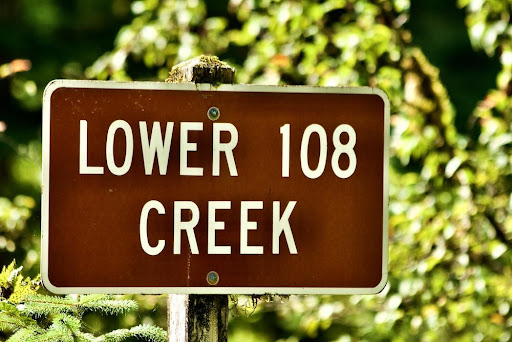 It’s a strange name for a piece of flowing water, but this sign lets you know you’re at the 108 Creek.

The first stop was the Bridge Hole on 108 Creek. I’d never fished there before, and while checking it out from the bridge a salmon rolled, then another. I put on my waders and grabbed the four-weight. The morning light was gorgeous, falling through the spruce trees onto the creek. Three or four casts in, the line came tight.

A silver salmon danced on its tail to the music of the creek, only to be released a few minutes later. It was a harbinger of things to come. Two pink salmon came to hand before I climbed back into the Suburban.

The next stop was the Cable Hole, also on 108 Creek. I hoped for a Dolly Varden, but didn’t complain when the hole proved to be packed with pinks. After three fish I left, since there was an agenda to keep. Some berry picking happened on the way back to the car. 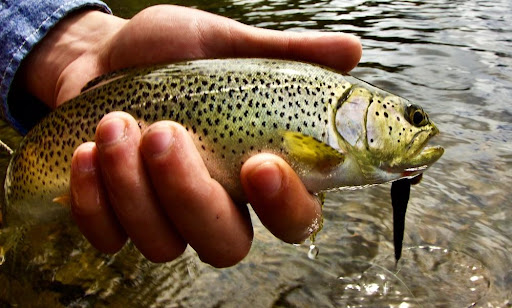 Forty minutes of curvy, bumpy dirt road later the ‘burban stopped and discharged me at Red Creek. I wanted a cutthroat and a rainbow trout. I got the cutt, but the rainbow (if it was in fact a rainbow- it did jump amazingly high) jumped off. I got another pink as a consolation.

Back into the ‘burb, off to Memorial Beach. Didn’t know what to expect. Grocer Don told me that it was possible to catch Dollies from the beach. Intrigued, I wanted to try.

A five-minute walk brought me to a gravel beach with giant limestone outcroppings along the water here and there, with fantastic views of the bay and snow-covered mountains to the north; not at all a bad place to wet a line. An older couple was there with at least a half-dozen kids. The kids were having a blast, running and playing, screaming and shouting. The man came over to me and apologized for their noise. 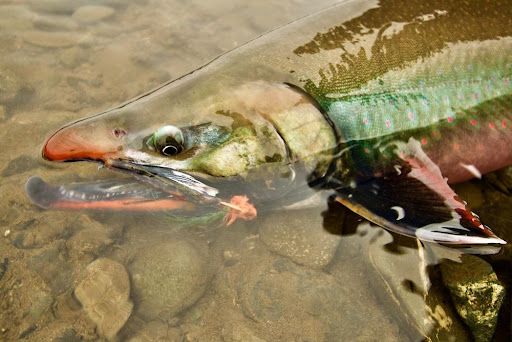 A fat, colored up Dolly Varden. Fly is an egg-sucking smolt.

“Hey, it’s happy noise,” I told him. “It’s all good. This place is amazing. I’m glad they’re enjoying it.” He told me he often caught Dollies from the beach on an incoming tide, using spinners. The tide was rising. I didn’t have any spinners, but I did have streamer flies. I walked back to the car to get the rod.

I’d like to say I was covered up with fish. That would be untruthful. Maybe a dozen were caught and released, with the largest a solid eighteen inches. But the fish became an afterthought when a humpback whale swam by, blowing again and again, not 100 yards away from me. My best cast came up considerably short, a good thing. 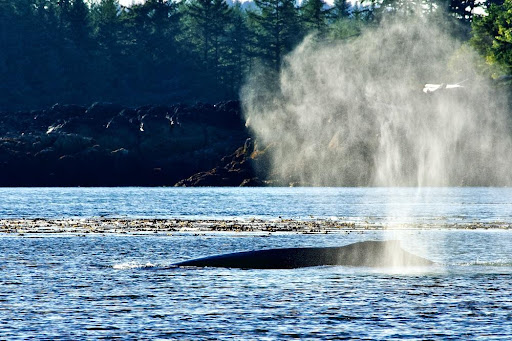 A humpback whale blows on an Alaskan shoreline. A four-weight is inadequate tackle for these beasts.

When I finished fishing the man came back and again apologized for the kid’s noise. He then questioned me about the Suburban, which he recognized. He introduced himself as Pete, a friend of Grocer Don’s, and gave me a package of smoked salmon; a kind and completely unexpected gesture.

When I got back to the car some color in the bushes caught my attention. Fifteen minutes that might have been used for fishing were spent picking and eating berries. I do not view that as a waste of time!

Son Alex had asked me to check out Alder Creek. It looked small, shallow, and difficult to fish, but there were salmon rolling in it, so I parked the car and hiked upstream a couple hundred yards.

The stream was drop-dead gorgeous. Stopping and checking it out was the smartest thing I could have done. 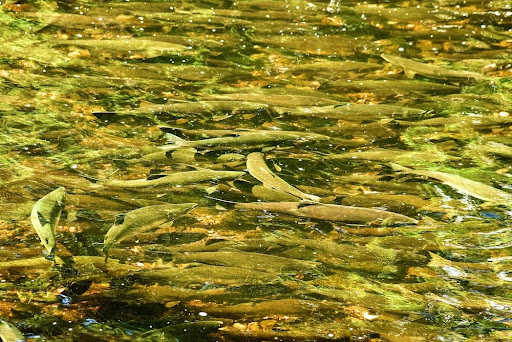 Pink salmon carpet the bottom of the 108 Creek.

The sun shone into a small hole. It was full of salmon but there were other fish in there too, either trout or Dollies. I went upstream a cast farther, put on an egg-sucking smolt, and tossed it into the hole. Bang! The nicest Dolly of the day.

The stream was loaded with them. The biggest was 22 inches, a beautiful fish. It was the hottest fishing I had that summer, with a fish on practically every cast until I ran out of time.

Drive-by fishing, Alaska style. It was a wonderful day. I thought of Tammy the whole drive back.