Time passes at such an incredible speed. It’s been 20 years since I have ventured into the deer woods with a rifle in hand. I have always loved fall fishing, cooler temperatures, the beauty of the tree colors, and the water dimples as leaves landed in pools and eddies. I replaced tree stands, rutting bucks, and grunt calls for more river serenity. It was a priority decision.

Time to break that fall fishing tradition for a weekend and spend outdoors with my son-in-law on his family property. He has waded rivers with me, chased fish on the fly from mountains to the coast, and now my turn to enjoy his world for a weekend. His passion for deer hunting would rival most. Today we would split up our passions, a morning deer hunt, and an afternoon pond fly-fishing trip. 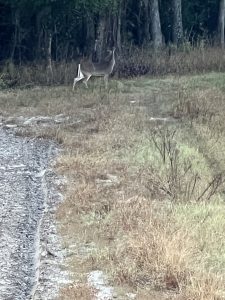 Thirty minutes before daylight I climbed up the ladder to make myself comfortable in a box stand constructed of 2×4’s, 2×6’s, and plywood, situated about twelve feet off the ground. My coffee cup full and light jacket were in order. A comfortable and cozy 48 degrees with air moist enough to see your breath. A reminder that colder temperatures and winter would be approaching soon.

A quiet stillness prevailed. At the early hint of daylight, a pair of barred owls broke the silence. I occasionally listen to them from my back porch at home. There is something special about being surrounded by acres of wildness and hearing them.

The deer stand was situated near the edge of a swamp and longleaf pine thicket, with enough hardwood trees loosely scattered to break the monotonous pine outline. This location also afforded me the luxury of listening to wood ducks leaving the roost for their morning flight. My coffee tasted so much better out here. Sitting quiet and still would be nearly impossible and was glad to be encased in this wooden box perched on the pines’ edge.

Without the normal civilization interruptions, I could sit and mentally plan my annual Smoky Mountain adventure coming up in several weeks. I couldn’t ignore observing the activity of so many small songbirds dancing along with the weeds and bush-hogged walking path below the stand. Buntings, chickadees, and wrens were nervously flitting around with no evidence as to direction as the sun began to peek over the pine tops.

Several birds landed on the roof of the deer stand, scratching the tin sheet as they walked overhead. One bird decided I needed some company and flew directly into the deer stand with me. What a commotion commenced! The flapping of wings and bird feet in my face created a high degree of anxiety for both of us. To have successfully survived an upset songbird bird “close encounter” is a remarkable feat. After this event, I surmised that every deer within hearing distance had been spooked. I had a little coffee left to drink and picked out the floating feathers. After twenty years I had forgotten how stressful deer hunting could be. Time to get back to thinking about my fishing trip. 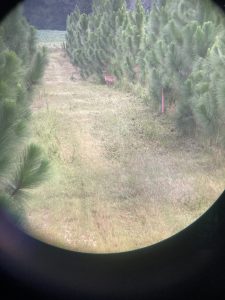 The heavy damp morning air created condensation on the inside of the tin roof. Gravity worked well as these tiny droplets echoed a heavy thud as they splattered the wooden floor and back of my neck.

I looked at my watch and had been sitting here for almost 11/2 hours and hadn’t thought about my upcoming trip. Being mesmerized by the awakening of wildlife just enveloped me. Then I heard it, a cluck, a soft yelp, a cluck again and here they came. Like a marching band on Thanksgiving Day at the Macy’s Parade, the turkeys had arrived. All 9 hens were clucking, yelping, scratching in single file, resounding a cacophony of sounds announcing their presence and pecking order. They appeared headed to a small disc-up patch of ground to the east of the tree line.

I had forgotten about the simple, quiet mornings in the deer woods alone and was totally enthralled with these awakening moments. Time had stopped and I was caught up in the idea of just being there, visually watching the wildlife show as it unfolded.

A pair of squirrels gathering acorns in the few oaks remaining, began barking, chattering incessantly, and scurried up the tree and would not shut up, totally focused and fussing at something.

Movement from behind caught my eye. Four skinny trees in the thicket were connected and had a tail that swished from left to right. A small buck stepped out, raised his head to sniff the air for danger, then began crunching acorns as if purposely aggravating the squirrels. The buck was cautious, and after a few minutes quietly faded back into the thicket. Several does tiptoe across the field’s small clearing and showed themselves briefly, then also fading back into the loblolly forest thicket.

I never planned the Smoky Mountain fishing trip, and the world didn’t end. I even failed to raise my gun. The box of bullets had been left on the coffee table in the cabin and it didn’t matter. What an awesome and eventful morning. Time to go pond fishing!