Death in the Deep Dubbing 2021

The following is an excerpt from the Jim Mize book, A Creek Trickles Through It. You can find Jim’s books on Amazon or purchase autographed copies at www.acreektricklesthroughit.com. 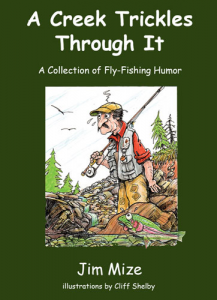 Death in the Deep Dubbing

Stalking a wounded lion in tall grass or crawling through a tunnel of tangled briers after your dogs who just cornered a wild boar certainly can test your heart well enough that you can postpone your physical another year. But for sheer danger perhaps few sports can compare to fly-tying.

If you’ve not participated in this sport this could come as a surprise, so allow me to share a few incidents of terror to serve as a warning.

Some years ago, a female person who shall remain nameless, picked up a light-colored shirt in the laundry belonging to a fly-tyer. He had been working with brown fuzzy materials and a glob of them had stuck to his stomach in a pattern that one could easily mistake for a spider with bad intent. The blood-curdling screech that ensued caused near physical harm to others in the household and as the young lady hung from the light fixture above, toenails well dug into the plaster for extra support, she realized that since the spider did not react it probably was fuzz. Thoughts of revenge seem to thrive in the minds of people while they hang upside-down and I can report that the fly-tyer survived, though barely. At one point, he would have preferred to be tracking a wounded lion.

Another tyer I know had a similar harrowing experience that involved hackles. He had just returned from a midwinter trip to the fly shop and, knowing he needed to restock his fly boxes for warm weather, had convinced himself to purchase three premium Whiting Silver-Grade rooster capes in different colors. Or, as he referred to them, necessities.

So, in approaching his fly-tying bench, he pulls the hackles from the bag, dropping the receipt on the floor. Unbeknownst to him, his spouse had followed him into the room and in the usual fashion of picking up behind him, laid hand on the receipt. The inquisition went something like this.

“You mean I can buy a whole chicken on sale at the grocery store for five bucks and the part they take off costs you $90? And you bought THREE?”

My understanding is that the downward spiral toward near-death was averted by a last-second maneuver that ended in a new couch.

Many fly-tying tools themselves can cause injury. For instance, there is a physical law called gravity that says that anything you drop falls. This particularly becomes a problem when the thing you drop is sharp and pointy. Within this category are such devices as bodkins, which are known to always fall point first. This becomes far more complicated if you are tying in shorts or barefoot, when you might well reciprocate with one of those blood-curdling screams.

Hooks have a way of sliding off the bench or falling out of the vise. Considering that the smaller the hook the harder it is to handle or find, you run considerable risk of having a breeding population of size 20’s and smaller living under your tying bench, just waiting for the right toe to come in range. Trust me on this one.

Other tools carry different risks. A rotary vise with high mileage could be contributing to carpal tunnel. Likewise, who hasn’t threatened bodily harm the first time they tried to figure out a whip finisher and inadvertently tied down a pair of wings that took twenty minutes to get just right.

Then there’s the matter of food safety. Considering the hours spent at a vise, invariably some beverage makes its way to the tying bench. Open cups such as mugs for coffee have fallen out of favor due to their ease in catching loose dubbing. Purely as a safety precaution, most tyers have switched to long-neck bottles, as it is more difficult to get dubbing inside.

But should particles of dubbing be consumed and you wonder whether to have your stomach pumped, the question becomes, “Is it safe to consume dubbing?”

Though I am not a food-safety expert myself, my answer would be that any dubbing, with one exception, is safe to consume in small quantities, especially if it is first rinsed in alcohol. That exception is Awesome Possum. The reason for my concern with this dubbing is I can only imagine what the possum might have done to be considered awesome. So handle this dubbing with care.

Fly-tying, remarkably, can even present problems outside the home. Tyers generally remember the fad when saddle hackles were being woven into women’s hair for ten dollars per feather, resulting in a run on hackles at the fly shops. One tyer I know, along with his new bride, was standing in a grocery line behind an attractive young lady who had purple saddle hackles woven into several small braids. He said later that he could tell by the way her jeans fit that she was concealing no weapons she wasn’t born with. He was staring at the young lady’s hackles, and when she turned around, he found himself caught in a trance both by her and his new bride, at which point he didn’t help himself much when he stammered, “Uh. . . nice. . . er. . . hackles.”

The doctor concluded that he didn’t need stitches but was impressed with the damage two purses can do, especially considering that one was wielded by a member of his family.

So, just as a safety message, never tie barefoot, keep a dog handy to blame the loose fuzz on, shred your fly-shop receipts, learn to avoid fashion remarks that involve feathers, always drink liquids at your fly-tying bench from long-neck bottles, and, as a last line of defense, be ready to whip out your credit card at a moment’s notice.

But if you’re trying to decide between taking up lion hunting or fly-tying, I’d recommend lion hunting as the safer of the two. Besides, you can probably make some really interesting flies with lion fur.

Death in the Deep Dubbing is an excerpt from Jim Mize’s award-winning book of humor, A Creek Trickles Through It. You can find Jim’s books on Amazon or purchase autographed copies at www.acreektricklesthroughit.com.