Cutthroats on the Yellowstone 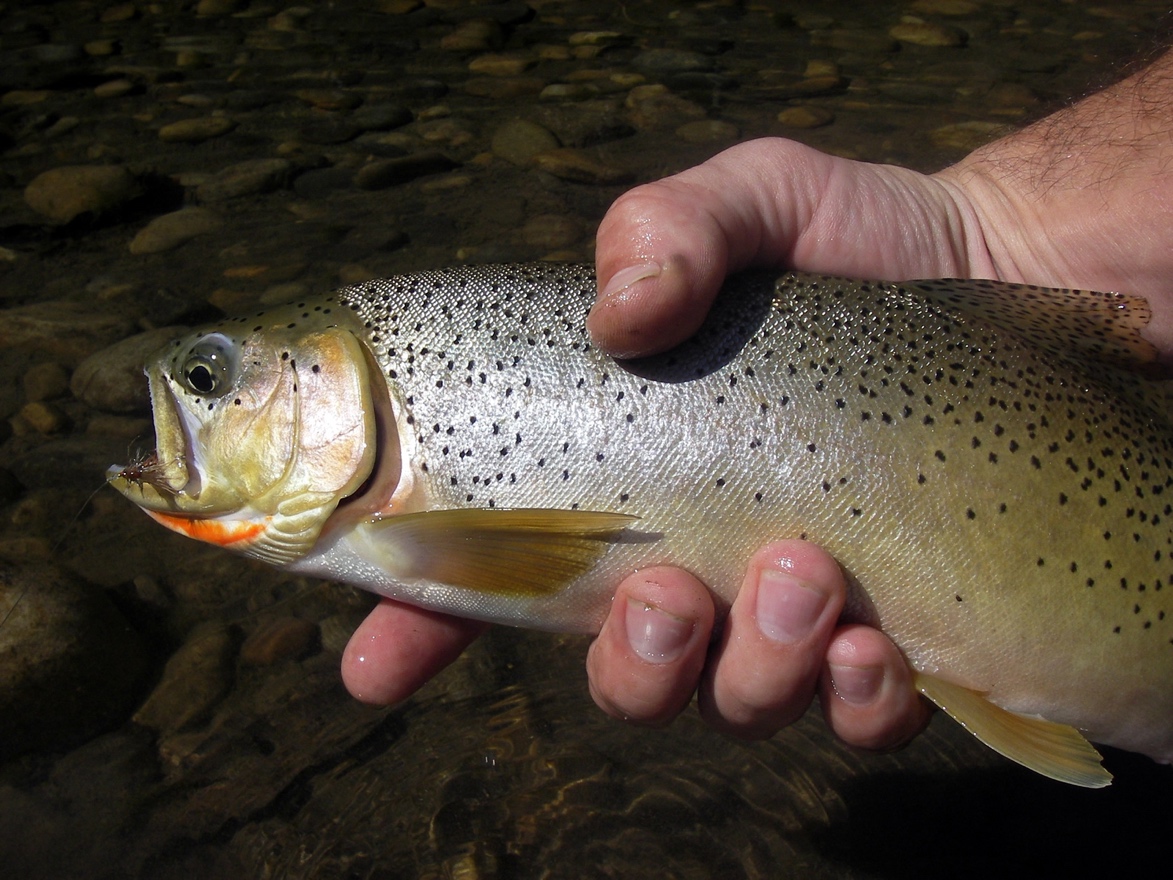 Anticipation is the spice that flavors our lives and plays a big part in any major experience. This is what we felt as we looked forward to fishing the fabled Yellowstone River in Montana and Wyoming. Several trips to the area had led in different directions, but this time, I planned to fish the Yellowstone. On previous trips we had focused on the Madison, but now it was time to stalk the Yellowstone Cutthroat in the pristine waters inside Yellowstone National Park.

As always, a big part of the fun is the planning, and this trip was no different. Gene and I ordered maps, searched the internet, researched various guidebooks, and etched out our journey. We would be traveling from South Carolina to Bozeman, Montana and driving to West Yellowstone with our wives. We’d be doing day trips into the park and surrounding areas, sightseeing and photographing the flora and fauna. The photo opportunities in this part of the west are outstanding, and we always shoot massive amounts of images.

The day after our arrival, we rigged our rods and eagerly hit the water. While the river is wide, it does not appear to be flowing very fast. However, you learn different when you get in over thigh deep. 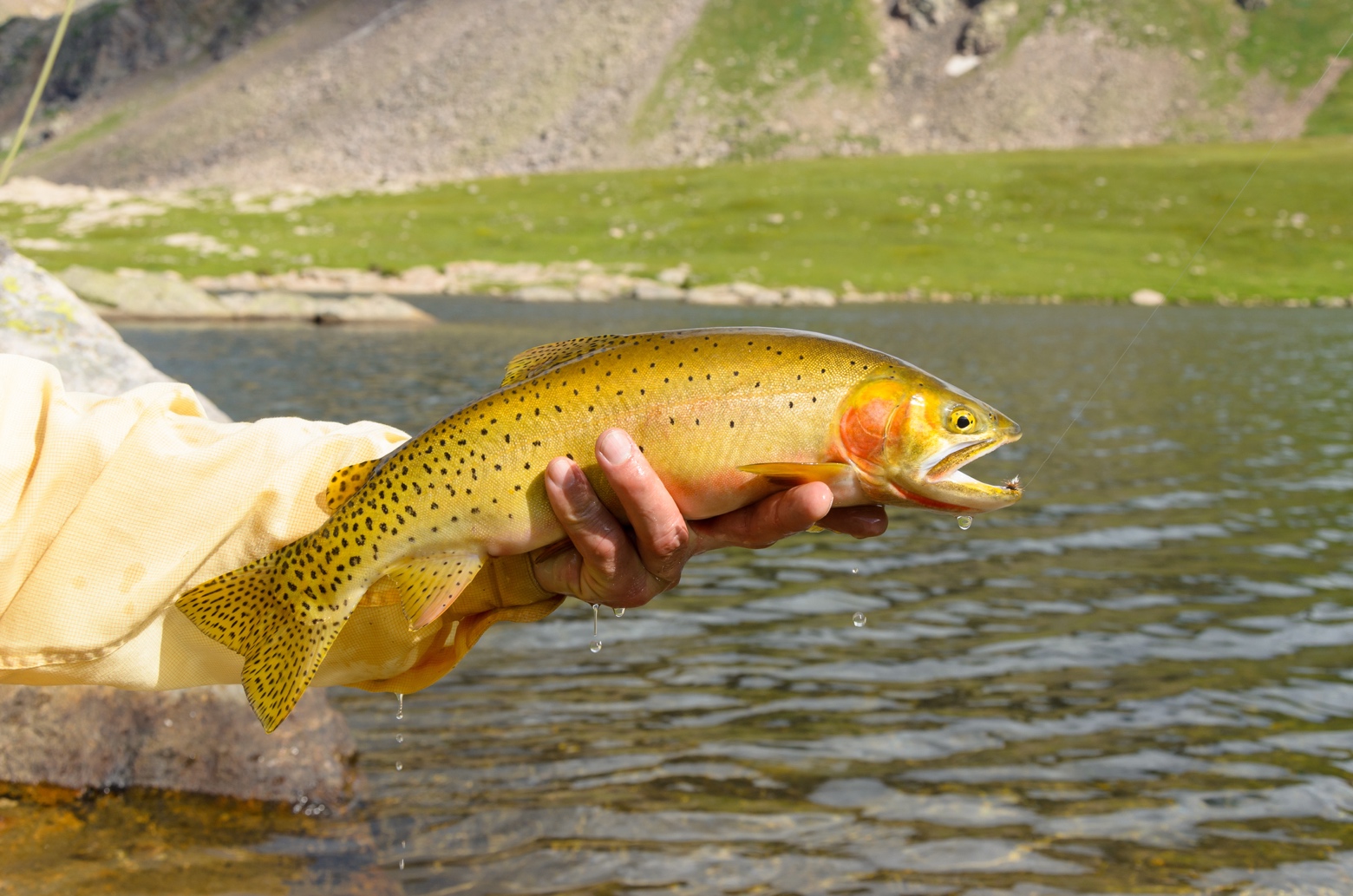 The force is awesome, and the volume of water staggers the mind. We were fishing near the Buffalo Ford and a few miles downstream. There the waterfall that enters the Grand Canyon of the Yellowstone reveals the raw forces of nature.

As the day began to warm, there was a sporadic hatch of small stoneflies, and I began to see large heads breaking the surface of the water as the huge cutthroats were taking them from the surface film. As they turned toward the bottom again, large tails as big as my hand would break the surface and slip smoothly into the clear depths.

I moved to a downed tree that had fallen into the water and extended out from the bank. This formed a breakwater and trout were rising where the water swept around the branches. That allowed the fish to stay in the calmer water and rise into the flow to slurp their hapless victims.

I tied on a size 14 Adams dry fly and on about the third cast, a large head appeared and engulfed it. The fish used the current to his advantage and it was all that the 6X tippet could stand to bring him under control. Finally, he came to the net, and I was looking at my first Yellowstone Cutthroat. What a gorgeous fish, with the coppery hues on the cheeks, the red slash at the throat and the amber sides flecked with the vivid black spots. He was 18 inches, which is typical on this stretch of the Yellowstone. After a quick photo, he slipped easily back into the river to fight another day.

A short while later, near that same tree, another cutthroat of almost identical size was taken on a stonefly nymph. There did not appear to be much bottom structure and the limbs and boughs were like magnets, attracting fish to hold in the slack water behind them.

We did not catch fantastic numbers, but the quality of the fish, as well as the setting, were exceptional. On the second day there, we had only begun to fish when we heard a snort and turned to see a herd of bison feeding on the bank behind us. We had to be careful not to snag them on our back cast. Shortly, they splashed into the water and swam past us as they forded the river. We were able to get some unforgettable photos.

The big ones often get away, but on the last day, I had a great experience with a huge Cutthroat that took a Stimulator as it reached the end of a long drift. I was hooked up to the biggest trout I had ever experienced, and the rod throbbed as the fish fought with power that moved through my hand like electricity. He moved into the main current, and it was likely the light tippet would fail. Every time that I would try to work him into the slack water, he would make another strong run. He eventually moved between two large, submerged rocks and sulked.

Steady pressure encouraged him to move, and he came to the top and rolled in the surface ripple. He made several more runs into the rocks threatening to fray the light tippet. He finally was near the rod, but his weight was too much for the tippet. Gene, who was watching all of this transpire, heard me talking to myself saying, “The tippet will never hold to land him.” And just at that instant, it parted.

The Yellowstone area is very special to me. Ever since our first visit there a decade ago, it is in my blood and I can’t wait to get back each summer. In addition to the great fishing, there is something about the wildness of those great open spaces; they make my heart sing and I feel more alive.

The names of the area’s famous rivers are like friends beckoning me to come and visit and partake of their bounty. The Madison, Firehole, Gibbon and Gallatin beckon; but after that year, the memory of the Yellowstone will always hold visions of Cutthroat trout.