I had the morning “off” one day during my first season guiding at Alaska’s Goodnews River Lodge. When not fishing, staff members were expected to work around camp performing tackle maintenance, cutting wood, doing carpentry, whatever needed doing. I was off because two new guests were coming in on a private charter. They would be assigned to me.

I was straightening out the fly-tying area when Mike came in with the new guests, David Ondaatje and his 12-year-old son Christian. As it turned out, David owns Winston Rod Company. Mike introduced us, then said to me, “Their gear didn’t arrive with them. They don’t want to use ours. The next plane won’t come for a couple hours. Keep them busy.”

There isn’t much around Goodnews River Lodge with which to entertain a 12-year-old boy except fishing, or maybe the shotguns.

In a minor flash of brilliance, I asked Christian, “Do you know how to tie flies?”

I didn’t mind. I excused myself to get my fly-tying gear, then set up two vises side by side and commenced my lesson.

I tied a cerise bunny leech, weighted with a large lead eye. Kings were in the river, and besides, the only species of fish in the river that wouldn’t take that fly were grayling and sockeyes. The bunny leech is easy to tie, and it catches fish. Perfect fly for a beginner.

The plan worked as I thought it would. Christian watched me tie one, we tied one together, I talked him through another, and he tied one more without my help. About that time, their gear arrived. We went fishing. 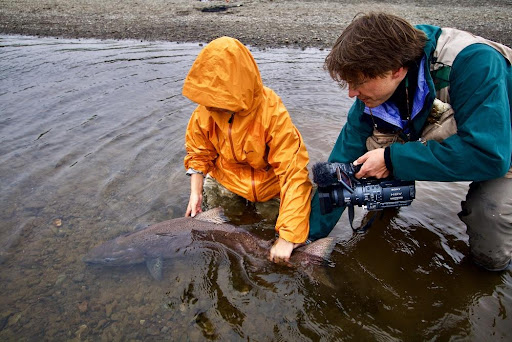 Christian wanted to use one of the flies he’d tied. He had cast it for only a few minutes when the line came tight. It was a solid king salmon.

I pulled the anchor and got on the oars, rowing the boat to the nearest gravel bar while Christian battled Leviathan, easily the largest fish he’d ever dealt with. Once the boat was secured, I bodily grabbed the boy and lifted him out of the boat. He and the salmon went mano-a-fino for a while, but eventually the rod wore down the fish enough that I could get a landing net under it.

Dad filmed while Christian revived and released the salmon, which was easily over 20 pounds. If you visit https://winstonrods.com/videos/adventure-films/ and pick “Alaska King Salmon on a Fly,” you can watch the film David made of Christian’s catch.

I always thought I should have gotten a complimentary rod for that whole episode, but that didn’t happen.