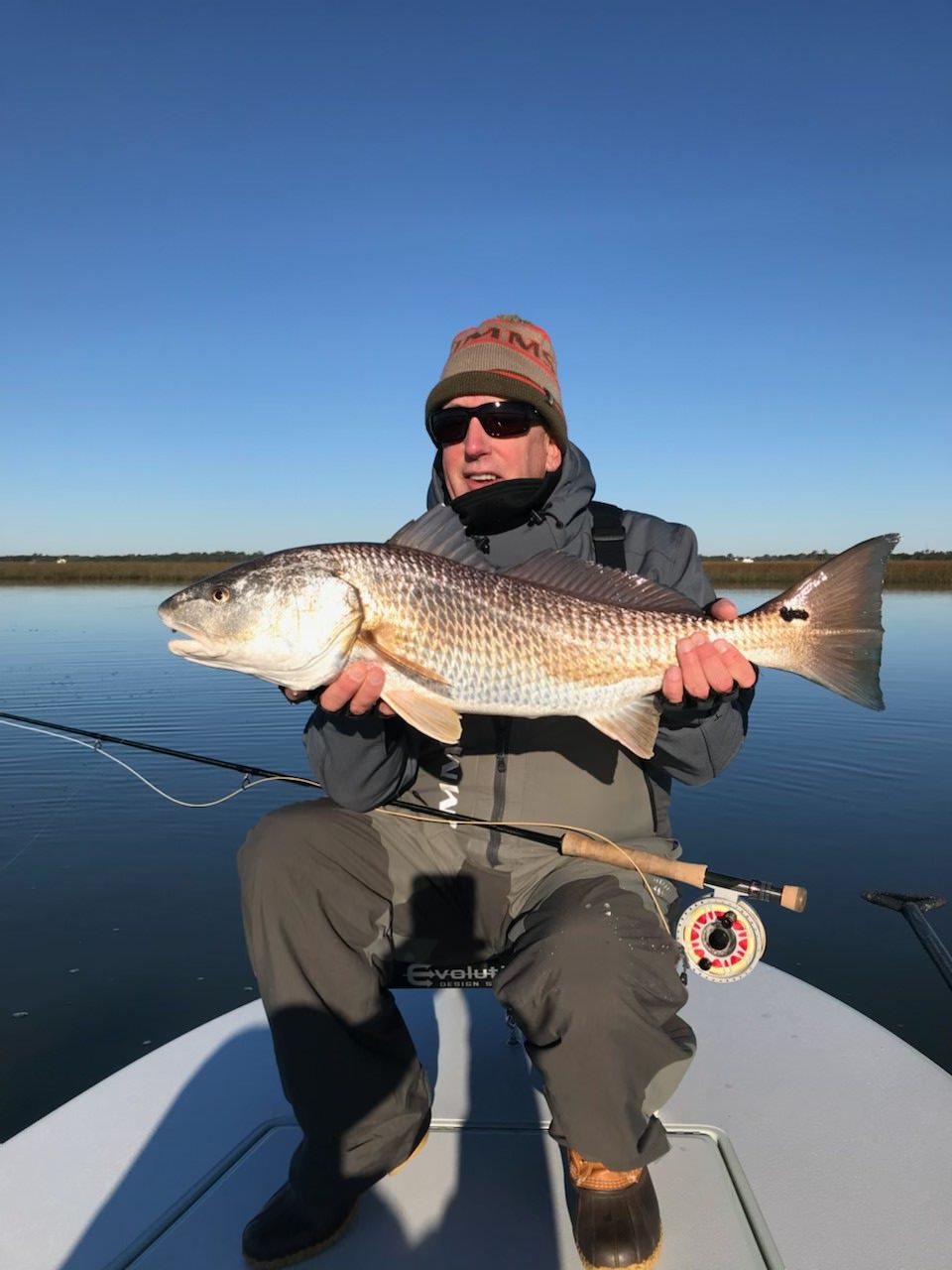 Christmas has always been and will continue to be a special time at our house. Last year I decided to combine the perfect holiday with a hopefully perfect day of red fishing. Merging a festive occasion with a hook set into a saltwater redfish would add the finishing touches to this holiday. It was decided that two of us would travel south to Charleston SC in search of cooperating fish that understood our agenda and were willing to participate.

The weather was cold, with lows in the upper 20s near the coast but much colder as we left in darkness from the northwest corner of South Carolina. One of my longtime fly fishing buddies had agreed to join in, as we both had developed a severe case of saltwater redfishhookanosis disease. The only cure was to stick a fly in the upper corner of several redfish mouths. To ensure our success rate, I decided to reach out and include my buddy of many years, Capt. John Irwin of FlyRight Charters, also referred to as my resident expert. We have fished together for many years and I consider him one of the most knowledgeable and personable guides along that part of the Carolina coast. Spend a day in the boat with him and his passion for the resource becomes contagious.

Throughout the years, he has learned my casting strengths and weaknesses and patiently positions the boat so as not to expose them. During our previous fishing trips, he had explained many times that these fish school up in big groups in the winter. He suggested that I needed to experience this as most of my redfishing involved chasing tailing redfish in warmer weather on flood tides. 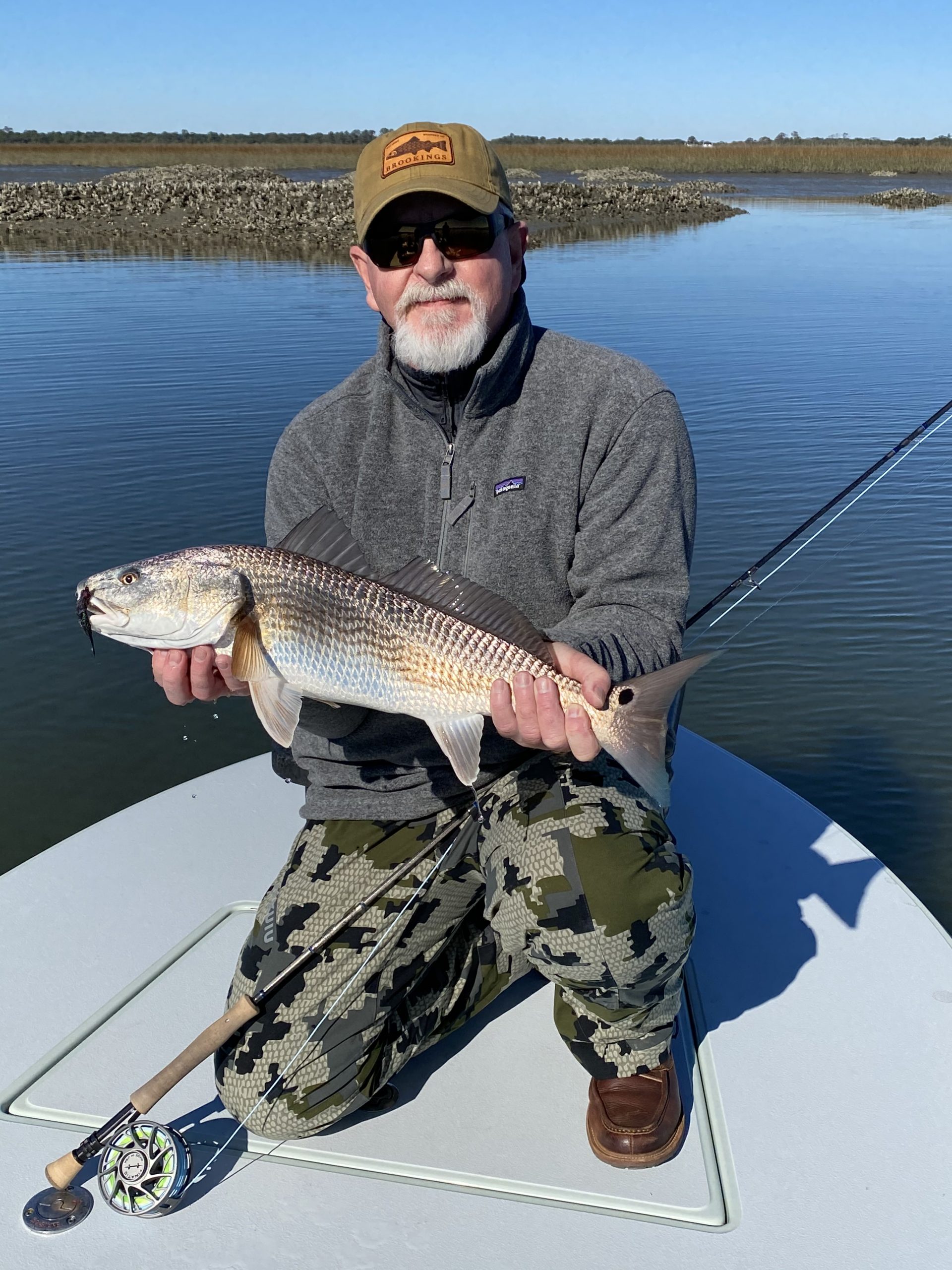 When I called him about guiding us after Christmas, he mentioned that we needed to get down here quickly. He had consistently found them schooled in one particular area and, of course, this played on my nerves. When a trusted guide buddy says to go fishing, the stars are lined up and it’s time. Without hesitation or any second-guessing, I was obliged to make every effort to take advantage of this hot tip!

I had previously tied plenty of flies such as the Purple Smurple, Gartside Soft Hackle Streamers, and Borski Sliders in various sizes, weights, and colors. On occasion however, I have tied a box full of flies only to get to my destination and discover the fish have been hitting something else and are reluctant to bite my offerings. But on this day, it was to be different. Providence would be kind.

Careful not to overdress for the southbound caravan down, we arrived 3 ½ hours later in Charleston, a little before 8 am. As we crossed the main bridge over the harbor, someone in the truck, had the bright idea to crack the truck windows and turn off the heat to “climatize” ourselves before our cold boat ride and excursion. By the end of the bridge, we had a change of heart and rolled up the windows. We would take our chances in the elements and test our clothing’s so-called modern technology.

We met John at the landing, got an updated fishing and weather report, and readied the fly rods. 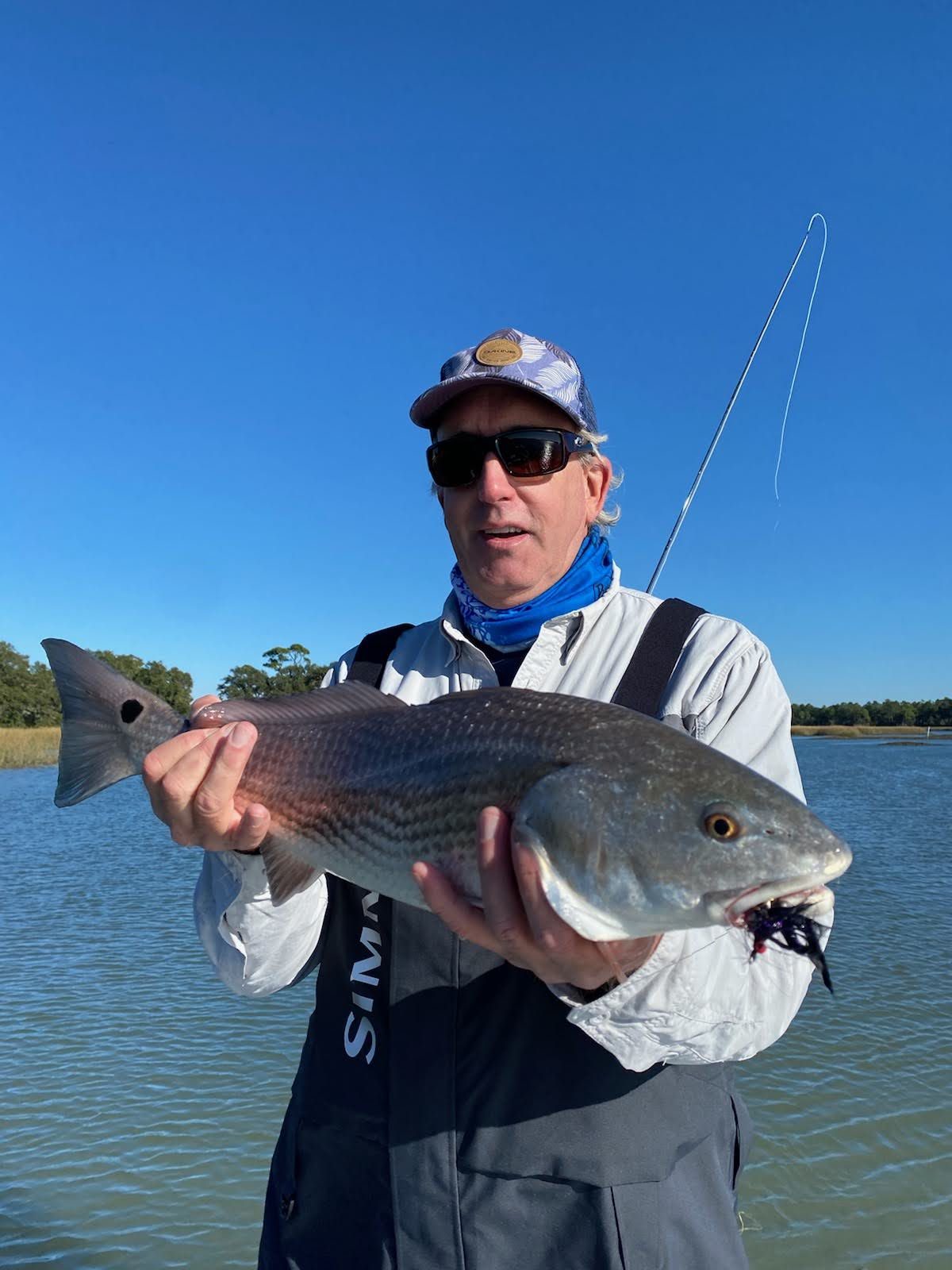 Soon John was backing the Hell’s Bay into the water and two overdressed mountain trout fishermen were ready for action. One more Yeti cup full of coffee was needed for the ride.

Coats would come off later but were necessary for the bitter ride out to the oyster beds. After twenty-five minutes in the open air at 40 mph with the temperature hovering around 29 degrees, being overdressed was not an issue.

I was, as always, enamored by the marsh’s beauty. Overhead, the clear sky was dazzling as it stretched across the boundaries of sight. The weatherman said visibility would be around 12 miles, but I thought I could see forever. Up close, blades of brown marsh grass swayed gently from the boat’s wake. The mirrored water looked freshly polished reflecting a rich cobalt blue. And there was a freshness to the cold salt air that was totally invigorating.

John shut off the engine as we glided around the oyster beds surrounding us. He climbed up to the poling perch, instructed us to get ready, and began to ease the boat along, stalking in a slow and quiet motion. He instinctively pushed us in and out of the oyster beds, each one growing as the waters continued to recede. In a few hours the oyster beds would swallow us.

Shorebirds had begun to congregate on the drying oyster outcrops. A solitary heron poked around the corner, a pair of rails flushed as we entered, and several American Oyster Catchers ambled along a far oyster rake. The wildlife was active, if only the fish would cooperate now. It was their turn. 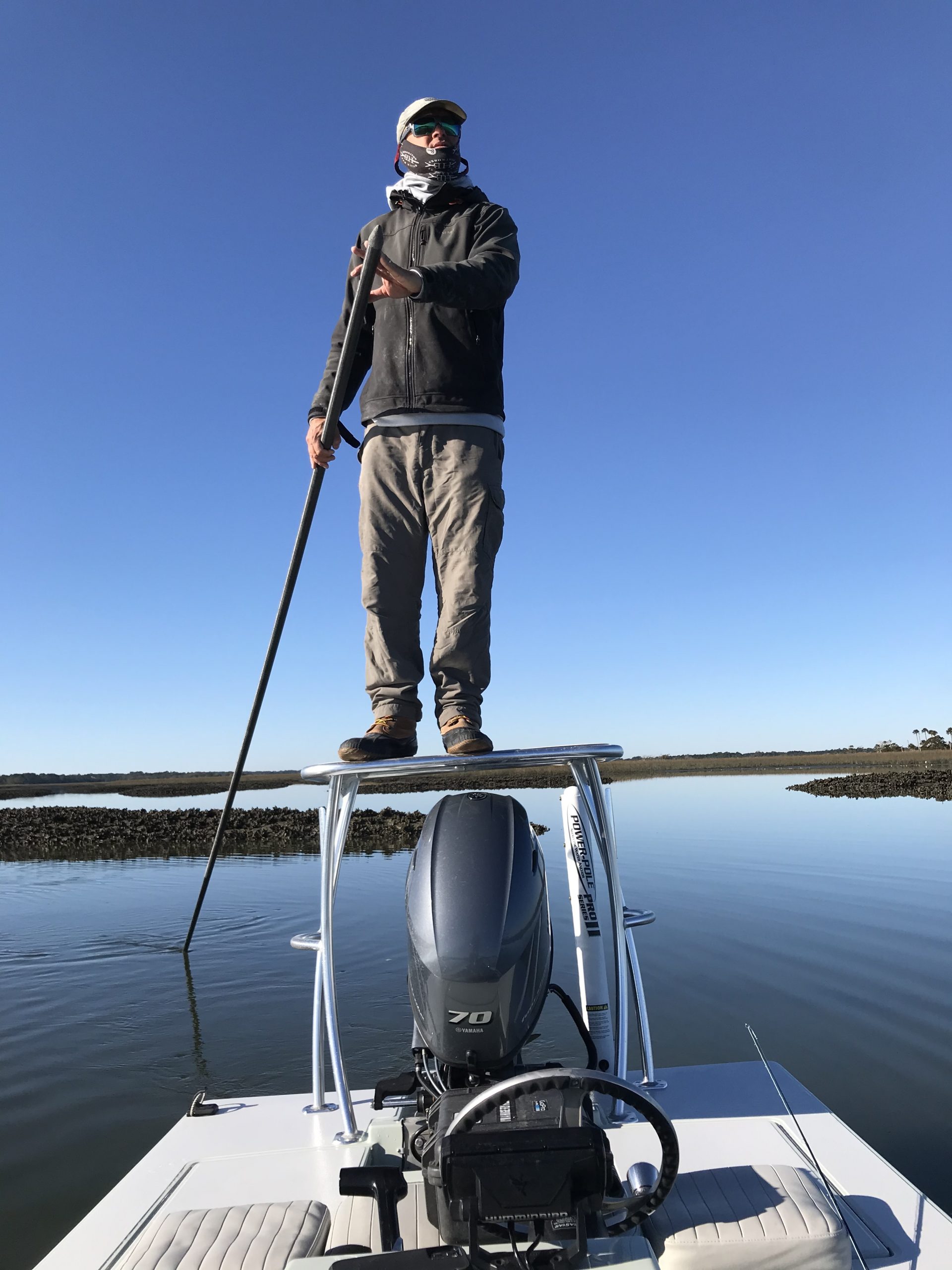 As we cornered a rather large oyster bed, nervous water broke the stillness and serenity of the moment and reminded us of our mission. The saltwater was so clear small stingrays were visible hovering in the sunny shallows searching for a meal.

Hightide was slowly depleting the marsh of water which would set us up perfectly to hunt the shallows for the remaining salt ponds’ indentations and congregating fish. The flats boat’s design allowed us to effortlessly glide across the shallows. Years of experience allowed the 21’ carbon fiber pole to be noiseless as John gently picked it up and pushed us through the bottom soft mud and murk.

Fishing has a continuous learning curve with never a payback for getting skunked. Each adventure is a new experience and provides a chance to enjoy the outdoors. A few hooked fish just makes the experience a little more enjoyable. Over the years I had my share of heartaches learning how to pursue these redfish and being as it was Christmas, I hoped a few presents could be unwrapped, or unhooked.

John called for the first cast to be softly dropped in front of the nervous water and to let the fly sink and sit, patiently wait, and then twitch the fly as the fish neared. My cast loops included high anxiety and goosebumps but those were overcome by concentration and determination. First cast, precision, patience, twitch slowly, and a hookup! A fish well deserved! 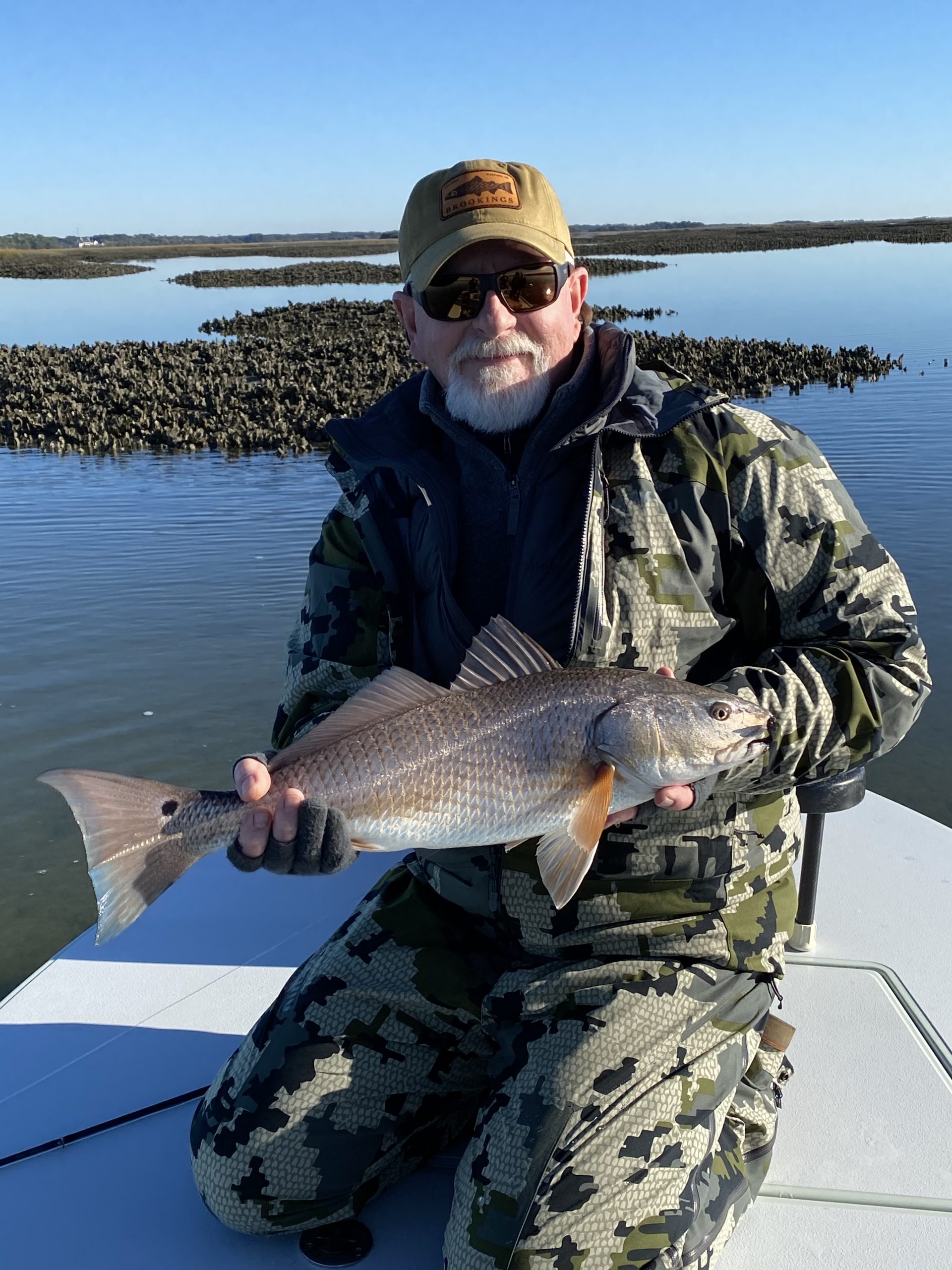 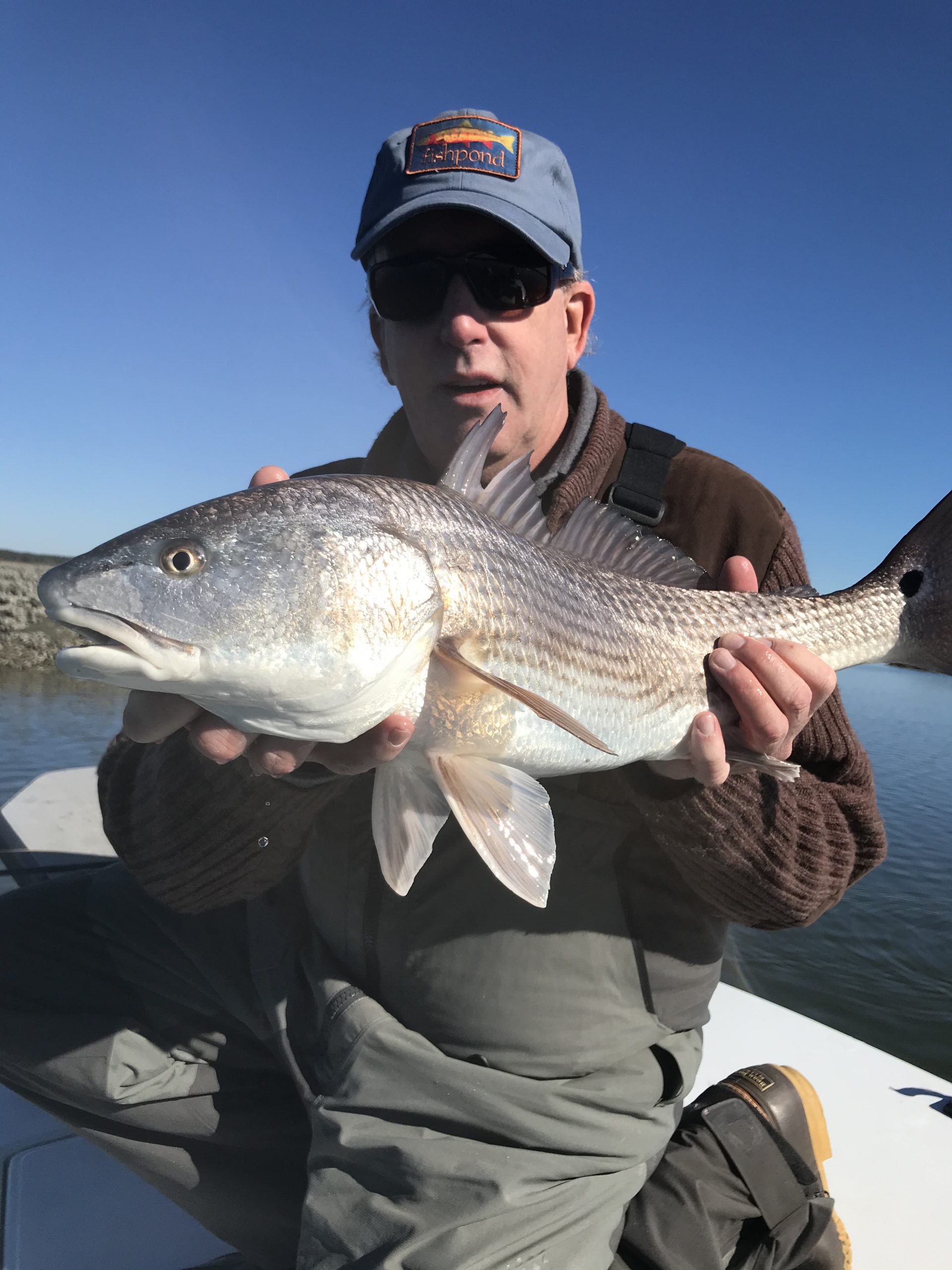 Maybe this was all a dream and I had indeed ventured back in time and it was yesterday after all. Either way, the day was going to be fun! During the next several hours my buddy and I took turns and caught almost every fish John called out, and some fish he didn’t. Instead of captain, we should have called him coach!

I can vividly remember his encouraging instructions,
“Three o’clock, 40 feet…….. strip set!”
“Eleven o’clock 35 feet…….strip set!”
“Lock and load and stretch one out about 2 o’clock, twitch it, line moved, strip set! Nice!”
“Fish on!” was repeated after every command from the captain. Some days it pays to follow orders precisely.

After all the hard days and tribulations, lost fish, and the fear of being skunked while chasing these reds, our fishing Christmas gift had been unwrapped. Fishing that day with John at the helm, guiding, directing, and sharing his experience with my friend of many years was a blessing. Thoughts of “should have been here yesterday” disappeared and were replaced with wonderful memories of “fishing in Christmas past!”