As a traditional longbow is to a high-tech compound, or a 6-string acoustic Dudenbostel guitar is to a 12-string electric Rickenbacker, so too is a fine bamboo fly rod when compared to one made of graphite or glass.

Likewise, just as proper string selection is critical to the performance of a vintage bow or a premier guitar, so too is the proper choice of fly line for a fine bamboo rod.

Conventional wisdom tells us that a fast-taper graphite rod with a perfectly matched weight-forward fly line is the proper pairing for long distance fly casting on open water, be it salt or fresh. And a delicate double-taper fly line is supposed to be just the ticket for a softer, more pliable tendril of bamboo on closer runs and riffles. But just as with bows and guitars and fine wines and women, each fly rod is different, regardless of its inherent composition, and possesses its own singular characteristics and preferences.

Brother Jam tried explaining all this to me back when I was a kid still too young to understand the complexities of wines and women and wooden bows and guitars, and which particular fly rod might hold promise of becoming a truly trusted companion—and that only if you can somehow manage to accept and respect their individual preferences and needs and set aside your own pride and prejudices and consider what actually works instead of yielding to prevailing norms, will your relationships with any of them ever be fruitful and serene and endowed with a rich and fulfilling warmth until death (or breakage) do you part.

And so, as I plowed headlong through childhood and adolescence and early adulthood and sought to leave the old ways in my wake, I gradually wandered away from those basic certitudes of youth—mistakenly assuming that the future lay in putting as much distance as possible between the past and the ever-evolving present. I became numb to tradition and nearly blind to my own heritage, and thus floundered around for a few wasted years making my mistakes with compound bows and electric guitars and girls who really weren’t all that good for me and, worse still, with fly rods whose materials had no lineage at all in anything that had ever drawn sustenance from soil and water or had breathed fresh air.

And all the while, Brother Jam just sat back and watched and waited and shook his weary head.

The turning point came one busy Friday afternoon in my mid-twenties when the receptionist rang to say there was someone in the lobby to see me, then whispered into the phone that this unscheduled visitor was very pretty and that I really should interrupt whatever I was doing to meet with her for a few minutes.

After all these years I have forgotten why that strange and beautiful lady had come to see me in the first place or what we talked about when I ushered her back to my office, and all I remember now is our wedding a couple of years later and how life took on true meaning and that Brother Jam finally relaxed and exhaled and patted me on the head and grinned—and how his wedding present to me was a brand new, custom-built bamboo fly rod.

After that, life was never the same.

Oh, I kept on shooting those compound bows for a couple more years and playing my old electric 12-string. Occasionally I’d sneak out for an afternoon alone with that heavy Horrocks-Ibbotsen fiberglass fly rod I had ordered from the “Klein’s Sporting Goods” magazine ad back in my early teens, and over time I kept adding to my arsenal of graphite fly rods of various weights and sizes. Each one had its purpose, whether in Michigan and Alaska, in salt and surf and out on the flats for bluefish and flounder and redfish and bone’s, and on all those large rivers and small streams from here to Patagonia.

But as I’ve continued growing older and time has grown shorter, those old bamboo fly rods upon which I initially cut my fly fishing teeth have gradually risen to the surface once more, like a winsome little trout rising to a tiny hand-tied dry fly . . . which is precisely what just now happened.

He hit a #18 green-bodied elk hair caddis on my second drift along the inside current that flows back beneath the cliff face that’s towering 300 feet directly above me.

The one good glimpse I have gotten so far of his sides and gill plates confirms that he’s a deeply colored rainbow about 11 or 12 inches long.

He’s doing his darndest to get back into that dark water beneath the overhanging ledge where he was lurking when he blasted out to smack the fly on my second drift past him. I have caught trout from under this ledge before. 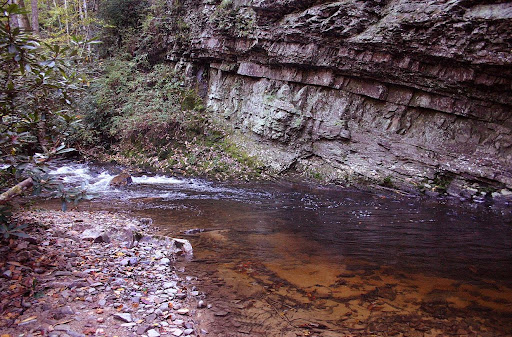 I can occasionally feel him shake his head as he pulls against this mysterious force he simply can’t understand, and I am in a delicate state trying to judge just how much pressure to apply at any given moment. Too little and he’ll get so far back beneath the cliff that he’s sure to graze the tippet on something that will break it; too much and I’ll break it myself.

But this little grass fly rod is a thing of beauty and precision and is performing its work to perfection, bending and flexing like a dancer to the sudden surges he’s sending back up the line and not allowing him to impart that final fatal half-ounce of pressure it will take to break the connection.

But THERE!! Something just changed, if only for a moment.

And now he blasts out from beneath the cliff into open water and catches the current—or is it that the current has caught him? Whatever it is, he’s now a dozen yards downstream and still gaining distance. But the delicate drag on this lovely little fly reel is doing its job well, and I don’t dare attempt to adjust it. So I angle my fly rod outward from the cliff to counter his movements and raise the tip to confuse him, and he turns into that calmer back eddy below me.

For a moment we both pause to consider our shared situation, and I ease downstream for a few yards until I can make my way out into the middle of the creek and cross to his side and get below him as he tries to turn back into the flow. But his strength is wavering, and I sense the need to bring him in as quickly as possible so as not to exhaust him.

Should I work him into my soft release net or simply try to bring him to hand?

The net, I think, is the best option, especially for him, for he’ll struggle less and so conserve his remaining energy to recover from the fight once it’s done.

Careful, Man!! It’s getting deep here and we’re much too far down in this gorge to risk turning an ankle or breaking a bone. Besides, it’s getting late in the day and the air is chilly and I don’t want to fall in and get wet.

I must maintain proper position and then ease the net beneath him, first making sure it’s well soaked so as to protect his delicate skin and scales before raising it around him.

Okay that’s good; net in place; slip it beneath him and lift.

Ohhh, he’s beautiful! Even more than I realized when I first hooked him. His colors are all lit up in the late-afternoon sunlight reflecting from the cliff wall, and I can tell he’s more angry than tired.

I prefer to leave him in the water and not touch him unless absolutely necessary. So I keep the laminated oak-and-maple net hoop parallel to the surface and raise it only an inch or two, then tuck the fly rod beneath my left arm. He is lightly hooked in his upper lip, and I rotate the barbless point first outward and then away from him with my hemostats until he’s loose. Still in the net, he thrashes once, twice, three times, and I angle him upstream with his nose pointing into the flow.

He’s leaning ever so slightly to the left and his body is more or less still. But his gills are pumping well, though not as vigorously as I would prefer, and I curve my fingers beneath his belly and chest and ease him back out into open water.

There—that’s better. He has reoriented himself more upright now, and his body is beginning to undulate—as if he’s starting to realize he’s still in trouble and yearning to be free.

But I will not let him go. Not just yet.

“You have to convince me you’re ready, Little Guy.”

My gosh! I actually said it out loud, as though he might understand Virginia English. And so I cradle him there facing into the current as his movements become evermore determined. 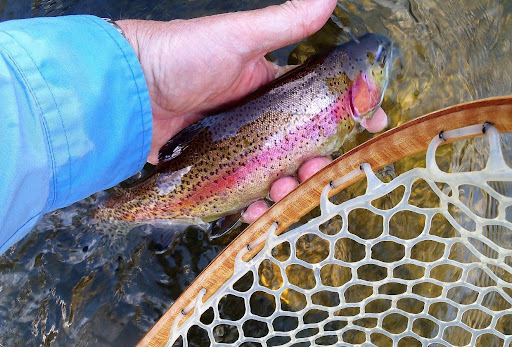 And now, finally, he appears to be strong and alert and good to go, and I lower my hand a fraction of an inch until I am no longer touching him. But he’s still somewhat confused and doesn’t move forward. So I raise my fingertips and tap the base of his tail and he flashes away and is gone.

Only now do I think about my loose fly line and gather it in. I dry the little caddis with my old amadou patch and recheck the sharpness of the hook. Its bent point skates slightly forward across the scarred surface of my left thumbnail before taking a firm bite, so I give it a light touch with the little diamond file that was once Brother Jam’s.

There are twenty minutes of daylight remaining, and I haven’t yet hit that run at the upper end of the cliff face. But there’s still time, plus a good full moon to light my way up and out of this gorge tonight.

“Careful, Man,” Brother Jam seems to say from some fond obscurity hovering somewhere back in a far distant past. “It’s deep here, and you’re too far down in this gorge to risk turning an ankle or breaking a bone.” 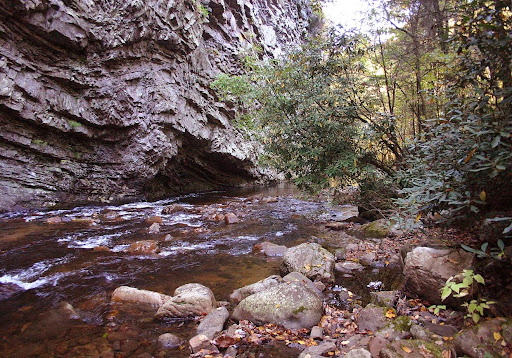 Signed copies of Michael Altizer’s latest book, RAMBLINGS—TALES FROM THREE HEMISPHERES, along with his two previous books, THE LAST BEST DAY and NINETEEN YEARS TO SUNRISE can be ordered online at SportingClassicsStore.com—click on “BOOKS.” Or call 1-800-849-1004. You may also purchase his books here by clicking on the RIVERS AND FEATHERS BOOKS page.

The author always welcomes and appreciates your comments, questions, critiques, and input. Please keep in touch at Mike@AltizerJournal.com.