Beanpole and the Loch Ness Monster

Ronnie’s diner was quiet for a Wednesday morning. Chuck and Ralph sat hunched over coffee at the counter. I was reading sports in a corner booth and Ronnie was wiping the counter for the umpteenth time when Beanpole strolled in.

“Hey guys,” Beanpole said to no one in particular while sliding into the booth.

Usually that response sends me running for the door. But not much else was going on so I asked, “What stuff?”

“You think there’s a real Sasquatch?”

“No,” said Beanpole. “I just heard some states were starting to sell hunting licenses for them.”

“Well, let’s just say I’d be glad to check in all those hunters who get one.”

“How about the Loch Ness Monster? They have photos of it.”

Chuck and Ralph had spun around on their stools to follow our conversation. Chuck gave Ralph an elbow and jumped into the conversation.

“Hey, did you guys hear about that thing they saw out at the State Park? Said it looked like a miniature version of Nessie,” said Chuck.

“I hadn’t heard about that,” said Beanpole.

“Oh, yeah,” added Ralph. “Since the park closes at dark, people aren’t there to see it.

But I hear that if you sit on the dock during a full moon, it will cruise right through the swimming area.”

“Well, just be in the park Friday night,” said Chuck. “That’s the next full moon.”

Chuck and Ralph paid for their coffee and quickly slipped out the door. Once outside, their conversation picked up.

“Hey, does your boy still have that remote-control submarine?” asked Chuck.

“Well, here’s the plan. We slip out to the State Park Friday night and set up in the cove by the swimming area. Then, we take an inflatable pool toy I’ve got that looks like a miniature Loch Ness Monster and tie it to your boy’s remote-control submarine. Once we see Beanpole out on the dock, we swim Nessie right by him. We should be hearing Loch Ness Monster stories in here for the next ten years.”

When Friday night rolled around, Chuck and Ralph sat hidden in the bushes looking at the swim area just as the sun set. An hour after dark, Chuck noticed some ripples around the dock.

“You think Beanpole’s swimming out to the dock?” asked Chuck.

“Nah, probably using his kayak. It’s so low to the water you wouldn’t be able to see it” suggested Ralph.

“Let’s get the show on the road then,” said Chuck.

So they pointed their Nessie float and submarine toward the dock and started it swimming. It left a wake visible in the moonlight. The suspense built as the contraption got closer and closer to the dock. You could almost hear the theme from Jaws being played by cicadas as the tension mounted.

Chuck and Ralph stifled guffaws as Nessie closed in. But from their side of the lake, what happened next wasn’t entirely clear. It could have taken two minutes but seemed to happen all at once.

The woman’s scream came first, followed by two or three gunshots, a lot of splashing, another gunshot, and then quiet.

Beanpole was already sitting in the booth at the diner Saturday morning when I arrived for breakfast.

“Did you go out to the State Park last night?” I asked.

“Nah, that tale about a Loch Ness Monster sounded like a bunch of baloney,” said Beanpole as Ronnie was filling our coffee.

“No, and I doubt we will,” said Ronnie. “The deputy came in early and said they were locked up at the county jail.”

“Well, the story is a little fuzzy but here’s what the deputy thinks happened. It seems that a couple camping at the park had slipped into the swim area after dark for a little skinny-dipping. Not long after they started, a monster came swimming up to the dock. The lady screamed and they both took off running. The park ranger was making his rounds and saw two streakers heading back to camp yelling about lake monsters. He aimed his spotlight at the swim area, saw the monster, fired a couple rounds, and the monster blew up.”

“So why are Chuck and Ralph locked up?” I asked.

“The park ranger caught them coming out of the woods shaken up by the commotion and holding a remote control. He had the sheriff come down and they both got arrested.”

“What did they get them for?” asked Beanpole.

“Trespassing at the park after dark and inciting a riot.”

“Did they ever catch the streakers?” I asked.

“The park ranger said that he couldn’t run that fast. Plus, he wouldn’t recognize them with their clothes on.”

Ronnie went back in the kitchen and we sat quietly sipping coffee.

“You know, Beanpole, it’s a good thing you didn’t fall for their prank. You could have been mixed up in all this.”

“I was just thinkin’ that,” said Beanpole. “On one hand, I’d hate to end up in jail over a Loch Ness Monster scam. But on the other hand, you have to admit, that must have been one heck of a show.” 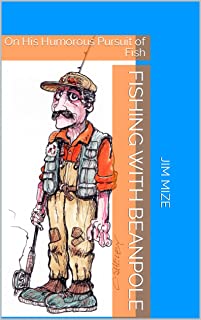 Jim Mize still baits one line for Nessie. This story is an excerpt from Jim’s newest book, Fishing With Beanpole. You can find his award-winning books of humor on Amazon or purchase autographed copies at www.acreektricklesthroughit.com.

Fishing With Beanpole is the second in the series of misadventures with Beanpole. If you have already read Hunting With Beanpole, then you and Beanpole have met. If not, I’ll introduce you to him. Beanpole is a curious fellow in all meanings of the word; he’s different, inquisitive, and gullible. These characteristics breathe life into a story when you add ingredients such as bad weather, tall tales, and natural phenomenon. By the end of this book, you will realize that your fishing buddies all have a little bit of Beanpole in them, or if not, you will wish they did. The world is a richer place once you have met Beanpole.

Jim Mize has received over eighty Excellence-In-Craft Awards, including for each of his first three books: The Winter of Our Discount Tent, A Creek Trickles Through It, and Hunting With Beanpole. Also, Hunting With Beanpole was selected for the Pinnacle Award from the Professional Outdoor Media Association (POMA), the organization’s highest honor for books.