I had gone to Santee Cooper in early June with the intention of catching bluegill on my fly rod. Fishing with Kevin Davis out of Blacks Camp, I had no doubts my host would put me on fish. My objective was to fish spawning beds in a few feet of water with a popper and wet-fly dropper.

I feel obligated to digress here and mention my passion for catching bluegill on their spawning beds. I don’t need to keep them other than the occasional mess, but a bluegill is just a fun fish to catch. They smack flies like they are tasting them, almost licking their lips, and then those panfish fight with a passion that belies their size.

In short, during spring and early summer, I often drive past trout streams to get to a good bluegill pond. Among my bad habits, this one can hardly be held against me.

As is typically my dilemma, I was a week early on the spawn and the fish were mostly in deep water still. Kevin managed to find some fish for me I could reach in shallow water with these flies, but the challenge had been issued by my finny friends so I was determined to try again with flies that could go deep.

Through the summer I tied weighted versions of bugs that catch bluegill. Clousers with oversized barbells and nymphs with enough weight to drop like cannonballs filled my fly box. I leaned slightly to one side when I put the box in my pocket.

Then, I rigged my fly rod with a longer leader and fluorocarbon tippet, thinking that I could still get by with a floating line. In ten feet of water, my line tip might work like a strike indicator when I got a bite.

Pedro looked at my fly rod and asked, “What do you plan to do with that?”

The next chance I got to chase deepwater bluegill came during our South Carolina Outdoor Press Association conference at Santee Cooper. This one was held in October and I expected the bluegill to be deep, most likely around brush. We had lined up plenty of guides to get our media members on the lake, so I was confident of getting a ride in a panfishing boat. I guessed wrong.

As it turns out, I was assigned to chase catfish with Captain John Smith, who goes by “Pedro.” He never said how he got his nickname, but I’m guessing the Pocahontas jokes got old. As I stepped onto his boat, he took one look at my fly rod and said, “What do you plan to do with that?”

Looking at his line of rods with more backbone than a first-grade teacher, I replied, “Put it in the corner of the boat and never touch it.” 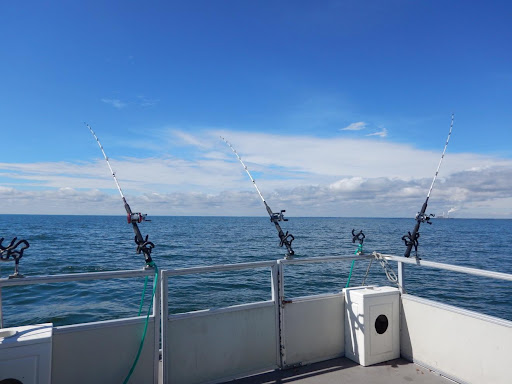 His rods had more backbone than a first-grade teacher.

Normally on media trips, we have several anglers in the boat who swap out fishing and photo opportunities. In this case, I was alone and the beneficiary of a guide and five rods drifting cut bait for catfish.

The weather looked like the tourism bureau had dialed it up for us, a sunny fall day with a light breeze like it came off the front of a postcard. With a couple drift socks dragging off the bow, we floated along backwards in the pontoon boat. I could have curled up on a seat and taken a nap except for those pesky fish.

You see, the catfish cooperated like they too got the memo from the tourism folks. Blue cats, channel cats, and one nice gar all latched onto our offering. I reeled in catfish after catfish until the day was done. Most ranged from 5-10 pounds, though a few got close to 15 pounds. By the end, I was tucking the rod under my armpit to do the heavy lifting. 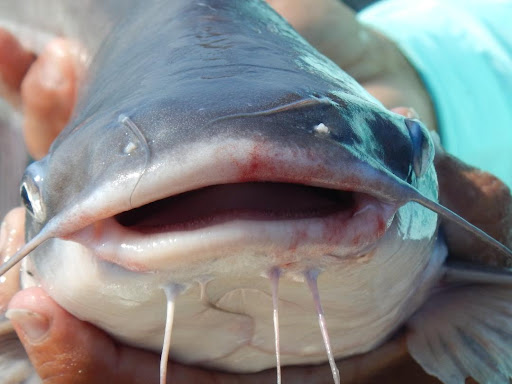 Catfish – One of many whiskered friends

We kept enough blue cats to make a mess and stock a few meals in my freezer. I will also vouch for the culinary delights those fillets provided. Cut into strips the size of fish sticks, breaded in a mix of flour, corn meal, salt, pepper, and a touch of cayenne, then drizzled in lemon juice right out of the hot oil, those fillets didn’t stick around long enough to become leftovers.

Despite being busy catching fish, I managed to pause long enough to shoot a few photos. And I remembered to pick up my fly rod at the end of the day from the corner of the boat. My weighted flies stayed in the box. The bluegill would have to wait until next time.

Anyway, this was almost a fly-fishing story.

Jim Mize has caught catfish on a fly rod, but that is another story.

You can find his award-winning books of humor on Amazon or purchase autographed copies at www.acreektricklesthroughit.com. You can also purchase Jim’s books here on Rivers and Feathers “Books” page.