A TINY MOUSE IN A GREAT LAND

To the best of my memory, this was the first time in my entire life I had ever been asked that question.

“Absolutely!” I responded, without hesitation, as Matthew reached into his vest and pulled out one of his perfectly organized fly boxes.

I had dreamed of fly fishing Alaska since I was a little kid roaming Roaring Fork and Wolf Creek and Little Tumblin’ with my Dad. And now here I stood on the ever-shifting shoreline of the Kanektok River. It was my fifth morning fly fishing this world-renowned trout-and-Pacific salmon fishery with my guide and new best friend, Matthew Hynes.

Matt is something of fixture in Alaska fly fishing circles, and I had felt very fortunate when the good folks at Alaska West had teamed me up with him on my first foray out onto the Kanektok from their well-appointed fly fishing camp in southwest Alaska, seven miles upriver from the Bering Sea.

Matt and I had spent our first few days together fishing for all five species of Pacific salmon—kings, silvers, humpbacks, sockeyes, and chum—in addition to the grayling and leopard rainbow trout that thrive in these fertile waters. Having been an inveterate trout fisherman since I was four years old, I had especially enjoyed these past few days pursuing the big native rainbows that prowled this river, and we had gone through most of the trout patterns in our fly boxes—or so I thought, until Matt asked, “Ready to try a mouse?”

For much of my life, I had heard about fishing for big trout with a mouse pattern; but I had never actually tried it myself.

“Absolutely!” I responded. “How does it work?”

“Well first, you’re going to need to have ice water in your veins,” Matt replied, then explained how the cast needs to be made straight across the river and slightly upstream. “Keep a tight line as the mouse swings through the current. Give it a subtle, steady bounce and try to create a slight wake.

When the trout first attacks the fly, you’ll see a big, bulging swirl—but you mustn’t strike; not yet! These fish learn early in life that a mouse has sharp little teeth and claws that can hurt; so, their first strike is usually with their body and tail and is intended to stun, not kill.

“They’re likely to hit the fly a second and even a third time before they actually take it in their mouth. So don’t strike until you actually feel the fish. Got it?”

“Got it,” I replied, knowing full well I would probably blow it at first.

Matt slipped a newly tied foam-and-deer hair mouse pattern with long rubber legs and an articulated hook from one of his fly boxes and tied it to the end of my 3X tippet with a perfection loop. He applied a thorough dose of floatant to the fly and handed it to me with a hopeful nod.

I eased into the river with as little disturbance as I could manage and sent the mouse out to the far side of the run. As soon as it hit the surface, I raised my rod tip until the line came more or less straight and the fly caught the flow, immediately forming a perfect V-shaped trail as it waked nose-first across the current.

“Okay, give it a little bounce,” Matt called above the whisper of the river, and I began to impart a subtle, steady cadence with the rod tip as the fly arched downstream with the flow.

On my second cast, I began to get the feel of what it takes to make a twitchy little bogus bundle of fur and foam and cold hard steel look like a real, honest-to-goodness, juicy-tasting mouse urgently trying to get to shore. I was just beginning to feel dangerously smug when the water beneath the fly imploded.

But Matt spoke calmly, “Not yet,” as the mouse reappeared belly-up on the surface, for a moment rocking sideways and rolling with the flow until the current caught it once more.

Again, the wake appeared all on its own, trailing backward from the mouse’s nose, and something inside me said that if I were a mouse, I would now be in full panic mode. So, I quickened the bounce, as though desperate to reach shore, and the big trout came up and gave the fly a devastating left hook, this time knocking it four feet through the air. And as it cartwheeled back onto the river’s surface and again began tumbling sideways with the current, I gave it a little slack line and simply let it roll, as though it were now thoroughly out of commission, and it was suddenly engulfed by a gaping, toothy, ghastly-white maw and vanished beneath a dark, ebony-dappled head and crimson-streaked side arching back into the depths.

I’m still not certain whether I actually felt the trout or whether I struck on sight. But the line came tight as the great fish dove for the bottom and rocketed upriver as the hum of my butter-smooth Billy Pate fly reel filled the cool Alaska air.

I have always considered fly fishing for trout to be a poetic, indeed a transcendent, endeavor. But what I was experiencing now had nothing whatsoever to do with poetry and was instead more like a street brawl.

At the end of her initial upriver run, the big trout shook her head mightily and then hit the air, with great sheets of spray arching from her glowing sides and broad thrashing tail. She swirled and dove, then leapt high once more before making a sharp, sudden 180-degree turn and careening back downstream, skirting within ten feet of me as she blasted past. 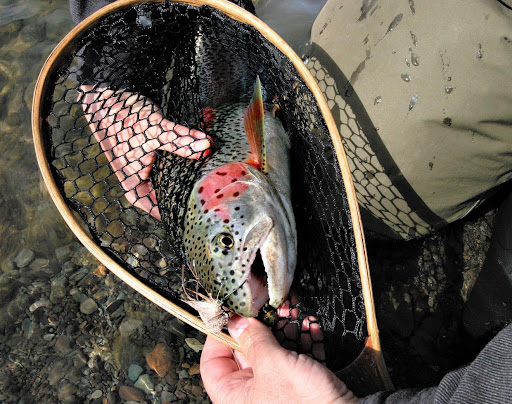 Finally she halted and shook her shoulders and head in a convulsing fit of rage and confusion and then began stalking side to side deep in the pool below me as I moved downstream, gingerly easing 40 feet out into the middle of the run below her to take full advantage of the current. Meanwhile, Matt had retrieved the camera from the beached jon boat and was making his way in our direction. And as the big trout slowly lost her bearings and turned toward me, I was able to bring her head up and slip my old wooden landing net beneath her.

For a few seconds she thrashed about in anger and indignation until I set her back into the river, still in the net, to calm her.

She was one of the most glorious creatures I had ever seen, her powerful tail broad and black-dappled, her fins clean and even and tipped in white. Her writhing back looked as though it had been wrought from the purest bronze, and her sides were infused with deep rich tones of crimson and coral and pink. Her gill plates bore the same florid hues as her sides and were tastefully trimmed in accents of turquoise and blue as they glowed there in the clear morning sun, and her gold-rimmed ebony eye seemed to peer straight into my soul.

I rested her sideways across the knee of my waders and slipped the tooth-scarred mouse from her upper jaw, then lifted her gently from the net and eased her back into the river. 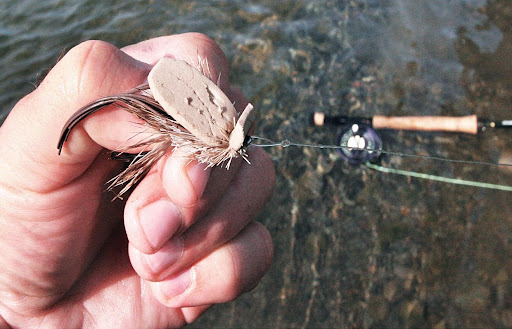 This tooth-scarred Hynes Mouse bears the honored marks of battle with one of Alaska’s big leopard rainbow trout.

It took a minute or more for her to regain her composure, and when her body began to undulate with ever growing resolve, I urged her forward into the flow and slid my right hand from beneath her chest and then my left hand from around the base her broad leathery tail and watched in awe and appreciation as she vanished back into the depths where she so rightly belonged.

Michael Altizer’s books, RAMBLINGS-TALES FROM THREE HEMISPHERES, THE LAST BEST DAY, and NINETEEN YEARS TO SUNRISE, can be ordered online from Sporting Classics at SportingClassicsStore.com—click on “BOOKS.” Or simply call 1-800-849-1004.