Bring only the bare necessities when packing into the Weminuche Wilderness. No chainsaws, no motorized vehicles, and, above all, no crowds.

Occasionally, Congress does something right. In 1975, the assemblage designated an area of the San Juan and Rio Grande National Forests as the Weminuche Wilderness – an area that now covers 497,061 acres of southwest Colorado.

Today the wilderness is as rugged and breathtakingly beautiful as it was 45 years ago. And the Forest Service plans to keep it that way.

For three years, I had planned to join San Juan Outfitting for a summer horseback/fly fishing trip into the Weminuche. But something always came up to postpone it. Finally, in early spring of 2019, I booked American Airlines for a roundtrip to Durango in August.

Summer 2019 was bitterly hot in my home state of South Carolina. So, when The Weather Channel showed the 40s, 50s and 60s in Pagosa Springs, I began to salivate. Or maybe that was sweat.

It was a pleasure to pack warm clothing – heavy socks, long underwear, cool weather gloves and jacket – I couldn’t wait to sit by a campfire, or see my breath on a chilly mountain morning.

I had very little to purchase for my trip. My largest expenditure was a new bag that would fit my Orvis rod tube, plus another 50 pounds of stuff. I ordered the bag from Orvis a week before my August 11 departure date, thinking I’d have it in time. Lo and behold, three days later, an Orvis package arrived on my front porch!

As I lifted the box, I thought, “This is very light for a piece of luggage. Mighty small, too.” 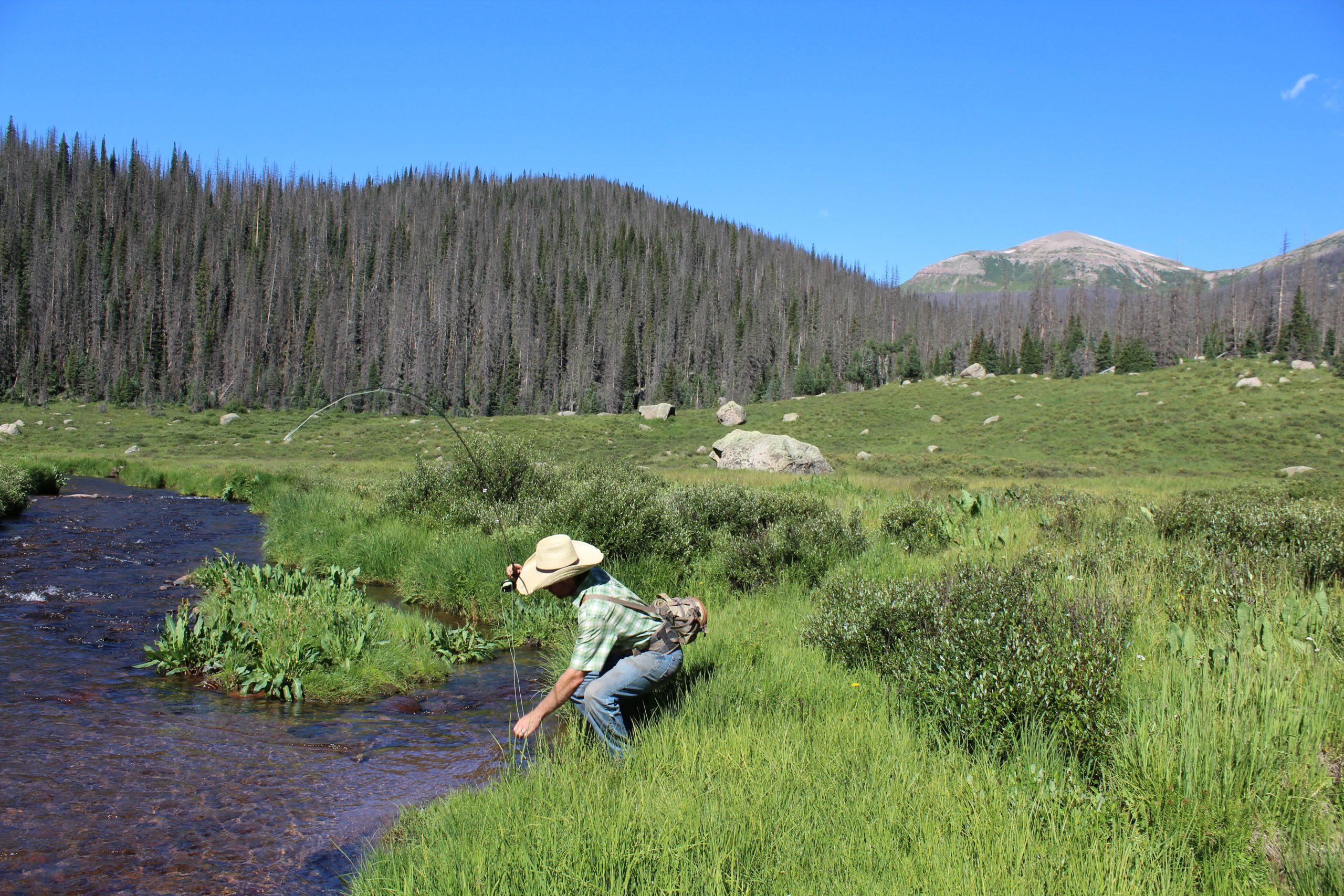 I promptly ripped open the parcel, peeled back some paper stuffing, and there was the most handsome cowboy hat I’d ever laid eyes on! A Stetson Buffalo Nickel pure wool felt model with a snappy leather band! Those nice folks at Orvis must have sent it as a gift for my big trip out west!

I promptly called up Orvis shipping and spoke with a very polite young lady. She assured me that somebody waiting on a nice western hat was probably wondering how he was supposed to wear a piece of luggage on his head.

Needless to say, I returned the hat, soon received my luggage, and was finally ready for take-off. But I really did like that hat.

Sunday, August 11th rolled around and by mid-afternoon, my feet were firmly planted in southwest Colorado, with a cool breeze blowing in my face.

“A pox on you, evil humidity!”

Pagosa Springs, about 30 miles away, would be our take-off point, so after Hertz-ing to The Hillside Inn and checking in, I made my way to the local fly shop. Let It Fly is the premier spot in town to learn what the trout are biting. So, after an enjoyable hour of talking fishing with owner “Pops” Miller, and buying way too many flies and accessories, I walked a few doors down to Riff Raff for a locally-brewed porter or two.

That evening, I followed directions to the Bauer Ranch where I met the crew and the horses. The main purpose was to give Jesse Bauer, the head guide, and Tony Wilkins, second in command, time to weigh our gear so they could evenly load the pack animals.

There were only two other guests for this trip. A couple from Clermont, Florida, Steve Moore and Jan James. They have a home in the country, and both have several years of experience riding. This knowledge came in handy during our 30-mile roundtrip trek, as I was the greenest equestrian in the group and needed a little help on occasion.

Fortunately, my last horseback experience was a cram session in what to do and what not to do. It involved five hours on a marsh tacky chasing dogs chasing wild hogs through the Pee Dee Swamp in South Carolina. After that experience, I felt confident I could handle a five-hour ride in the Wimenuche. 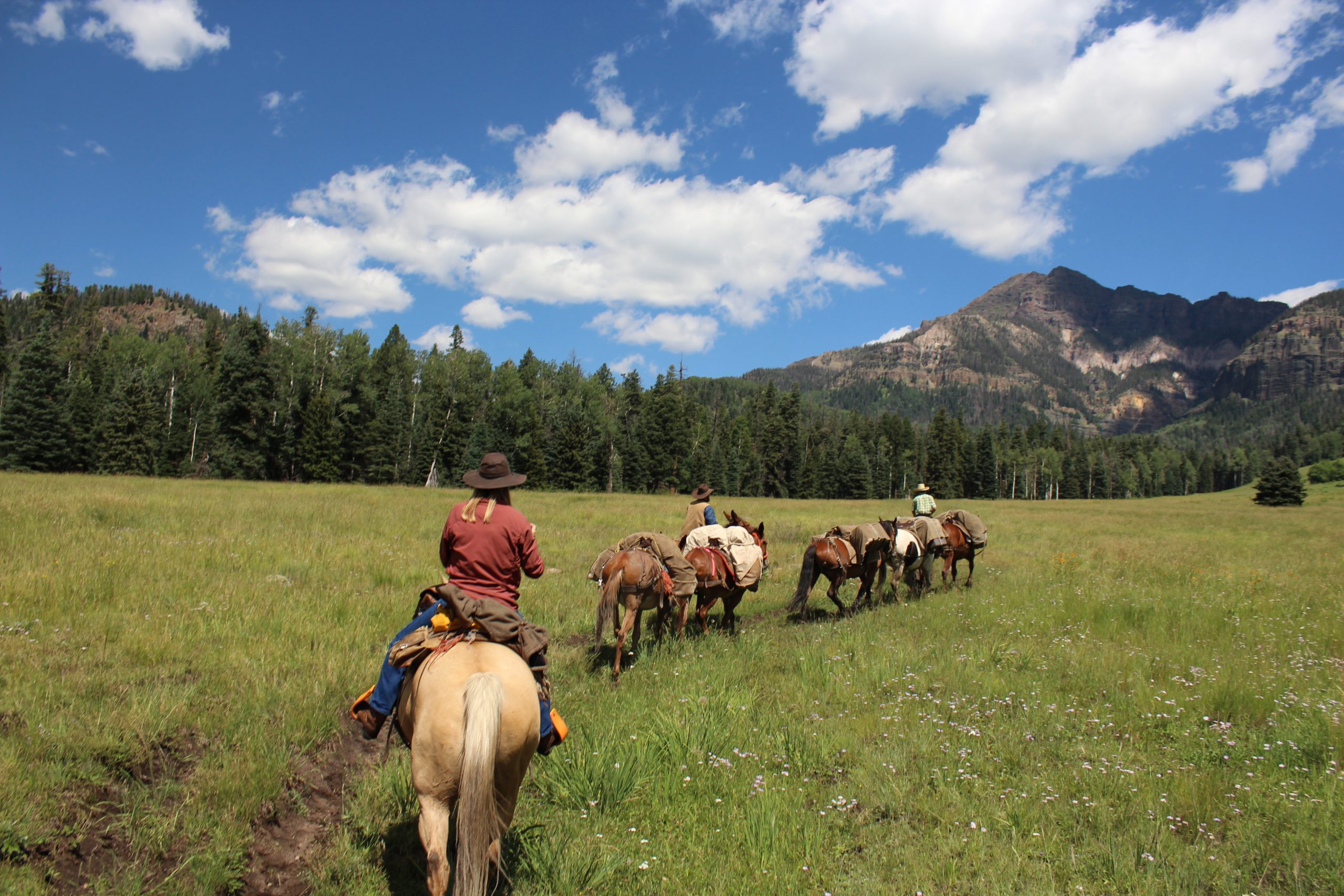 Monday morning, we again met at the Bauer Ranch, then horse-trailered up to the trail head an hour away.

By noon, I was astride a beautiful paint name of Poncho. He, like the other animals in our train, had traveled the trail enough times to be familiar with the potential pitfalls. Those included loose rocks, rushing streams, and narrow ledges.

Along the way, we all had our eyes open for signs of wildlife. Except for a few mulies jumped from their beds in the cedars, and a couple of moose, there was little activity that day. But then it was midday, so not untypical for deer, elk and moose to be no-shows.

By the time we reached our camp, we three flatlanders were ready to dismount and stretch our backs, legs and posteriors.

Camp La Osa consisted of three tents, some hitch-up lines for the horses, a fire ring, and 50 or so yards away, a poop-tent with a view. 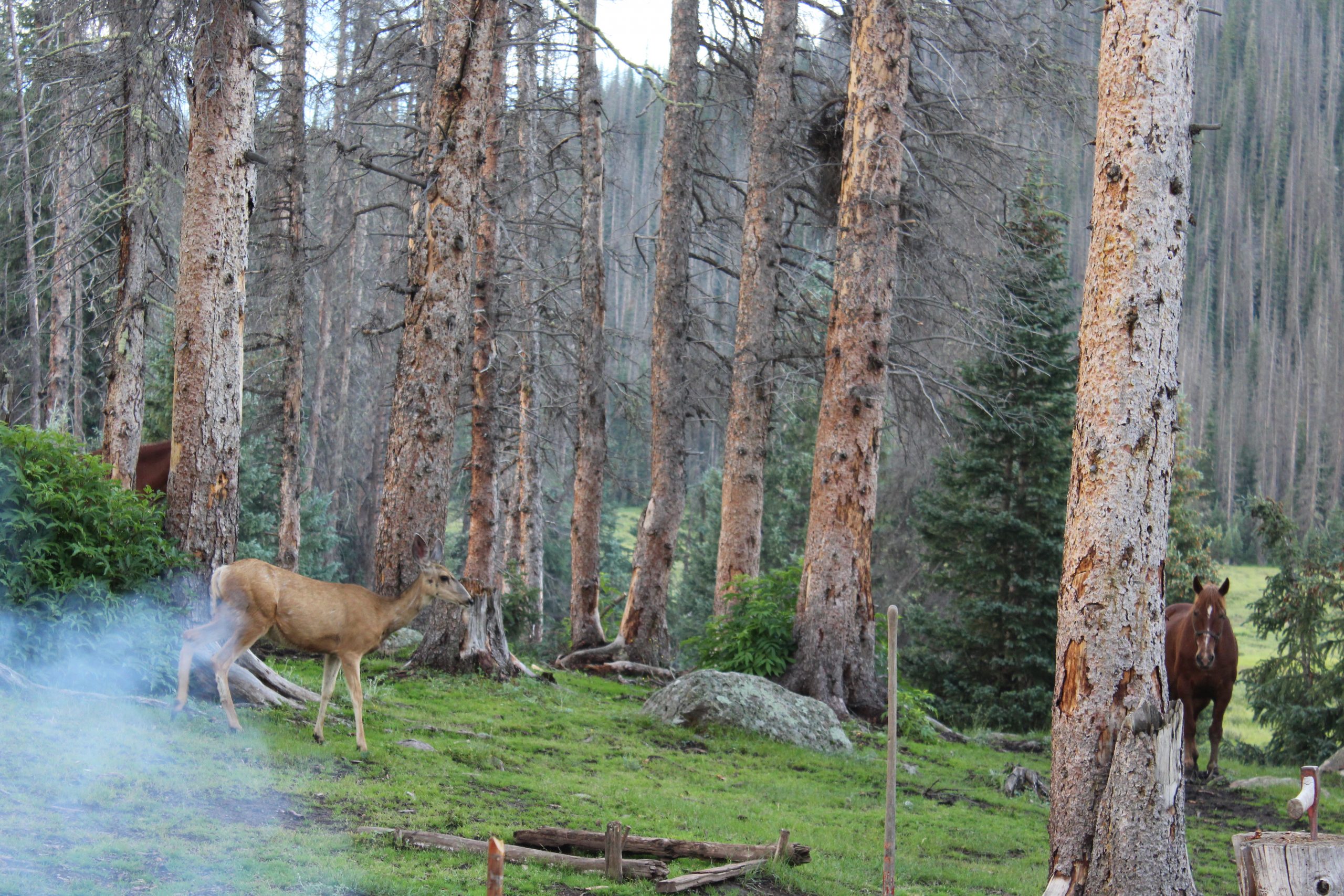 Jesse told me he uses the camp for both fishing and hunting groups. San Juan Outfitting is the fishing side while Crazy Horse Outfitters is their hunting operation. Once the elk and mulie hunting is done in November, Jesse and team must break down each camp for the winter.

The Forest Service insists that the spot be as seamless as possible with the surrounding countryside. That means cooking equipment, cots, tent canvas, hitching ropes – anything that was carried in must be carried out. Cedars that had been cut and trimmed for tent frames must be untied and tossed aside until the following spring when the camp is rebuilt.

After our bags were tucked away in our tents, we glassed the surrounding park for any signs of wildlife. A few mulies were grazing 100 yards out along La Osa Creek, which winds past the campsite feeding the Los Pinõs River, a short walk away. There we’d find the native Rio Grande cutthroat trout. Hungry cutthroats, hopefully.

We feasted on grilled steaks, then bundled up around the campfire. But not before a mini-hail storm blew through. “Weather just does that,” Tony said. At 10,000 feet in the marvelous middle of nowhere, it just does as it pleases.

And just before dusk, a couple of mule deer does appeared at the edge of camp, hoping to sneak a few bites of horse feed. Eventually, they became regulars, hanging around camp from dawn to dusk. Even a skittish little 2×2 joined them for a quick snack.

After a long day, we all eventually settled into our cots for a long snooze, only to be awakened by something wandering through camp. The Weminuche has a few black bears, and several of us were certain one was stealing through camp in search of food. Heavy, calculated footsteps, the banging of a few pots and pans, crunching sounds of hungry jaws…no one ventured out of their tents to get a visual.

Next morning, Tony located the culprit – a mule had gotten loose from the hitching post and had gone in search of the feed bags, which hung by a couple of cooking pans. So much for the bear story. 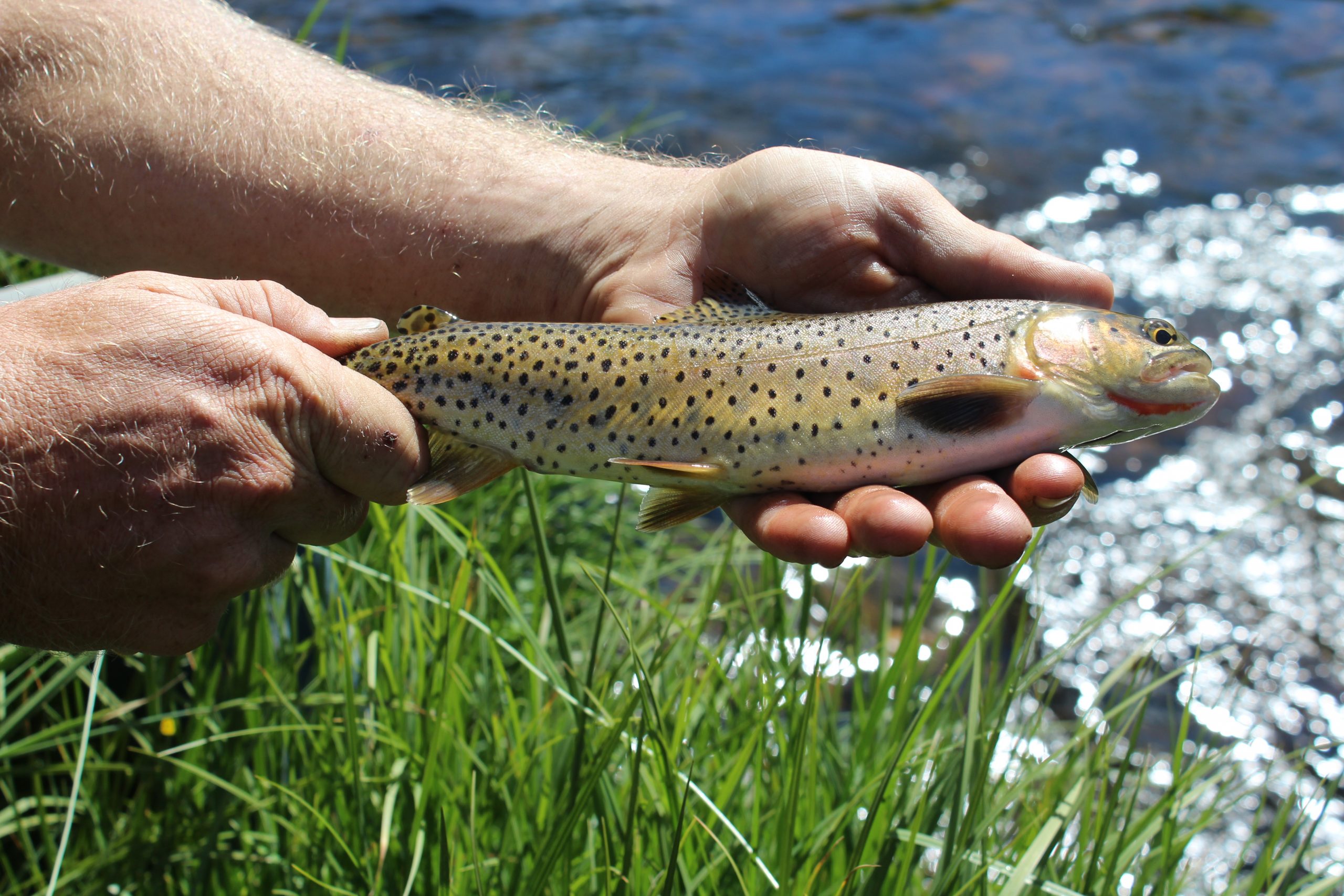 After a filling breakfast of bacon, eggs and biscuits, Steve, Jan, Jesse and I walked down to the Los Pinõs in search of cutthroats. Jesse was the first to hook one. That figures as he’s fished it a thousand more times than we have. So, of course, it was time for “What are they hitting? Whatcha throwing?”

I had a nine-foot 5-weight Orvis Helios, a tad heavier than needed for these smaller high-altitude trout. But I found it to be fine for working the fish through the swift riffles where they seemed to be mostly concentrated.

Within an hour, we all had brought in some of the beautiful native fish. After a few photos, each was returned to the clear snow-fed water.

Next day, Jan, Jesse and Tony took a horseback trip up into the higher elevations. Steve and I chose to return to the river for more trout fishing. After a frosty morning, the temperature worked its way up into the mid-sixties. The sky was clear, no other human beings were in sight, and the fish proved especially responsive to a tiny nymph. That’s a very good day in my book.

Along with commonsense rules like don’t poop near a water source, don’t litter, and don’t remove anything that was already here, there’s this – no groups larger than 25. That includes people, horses and dogs.

If you go…
Mary Adkinsson will give you a list of everything you could possibly need. While the weather was mild during our trip, it can get cantankerous, even in July and August. And if you haven’t ridden in a while, do so. Contact Mary at sanjuanoutfitting.com. To check out their hunting, visit crazyhorseoutfitter.com.